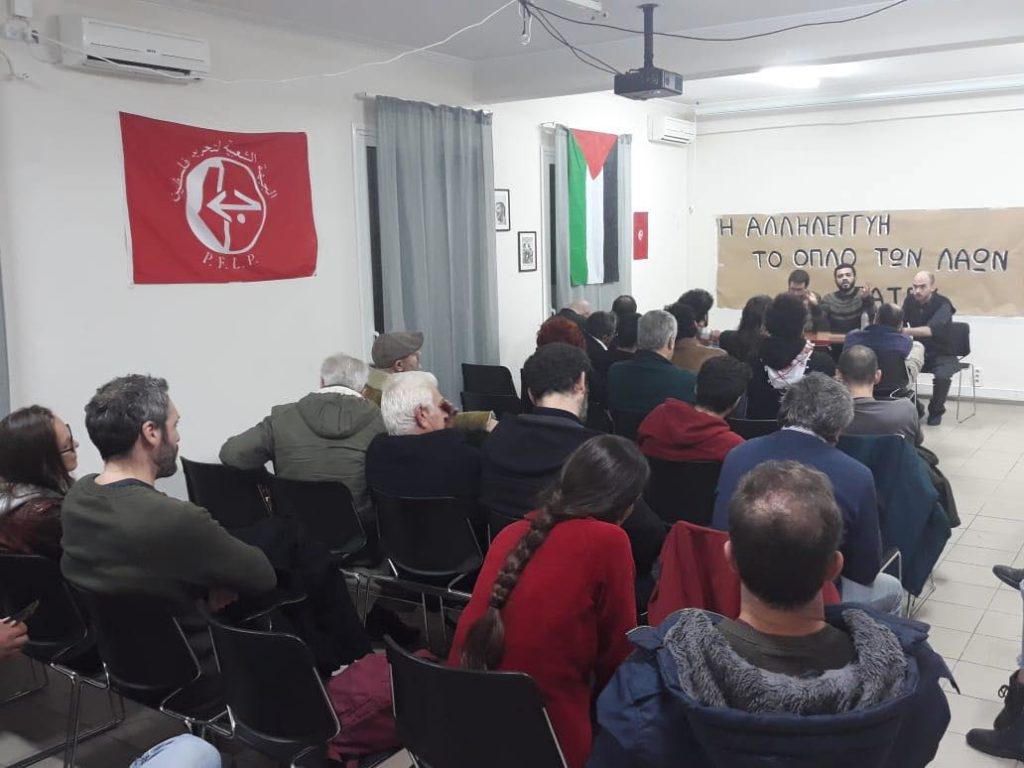 Samidoun Greece organized an event commemorating the Palestinian revolutionary left on Sunday, 15 December in Athens. Organized by Samidoun along with the Intifada Front and PAKE, an anti-war alliance, the event marked the 52nd anniversary of the founding of the Popular Front for the Liberation of Palestine (PFLP) on 11 December 1967. The event brought together Greek activists and Palestinian youth and community organizers to celebrate a long tradition of joint struggle and liberation movements.

Khaled Barakat, the international coordinator of the Campaign to Free Ahmad Sa’adat and a Palestinian leftist writer, spoke to the event in a video. (Watch the full video below.) Barakat noted that the birth of the PFLP was an important moment in the history of the Palestinian struggle for return and liberation. He also situated the current Palestinian struggle amid a global battle against racism and fascism, part of the fight against imperialism, Zionism and reactionary regimes.

In particular, he noted the dual threat of austerity and sanctions perpetrated by capitalist, imperialist powers. “The people of Palestine are on the front line, just as the people of Greece are on the front line. With this, comes a responsibility to arm our people with the right analysis and approach to progress our struggle against colonization, imperialism and racism,” Barakat said. 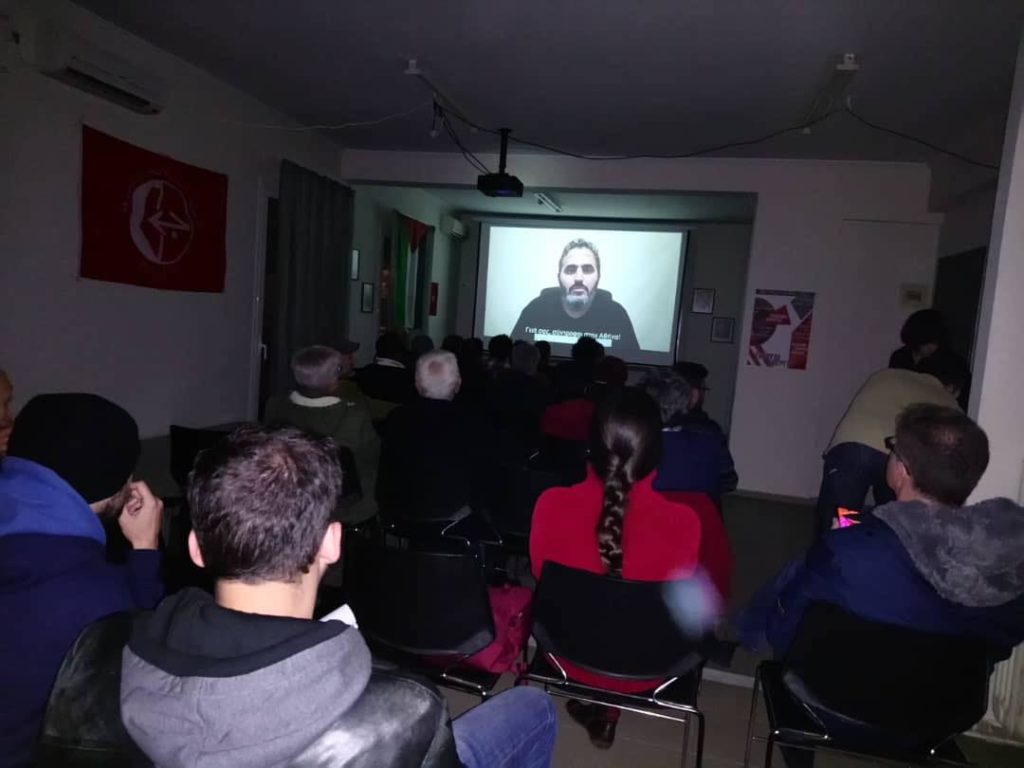 He noted that imperialist powers are very clear about their objectives and goals and that it is important for the Palestinian movement and all liberation struggles to also be clear on our objectives and goals. He expressed solidarity with Venezuela’s resistance to sanctions and the Bolivian people, victims of an imperialist-supported coup against the democratically elected government of Evo Morales and MAS. He also noted the immediate efforts of the coup government in Bolivia to restore ties with Israel, severed by the Morales government years ago, reflecting the interests and involvement of the Israeli state in imperialist attacks and reactionary regimes the world over. 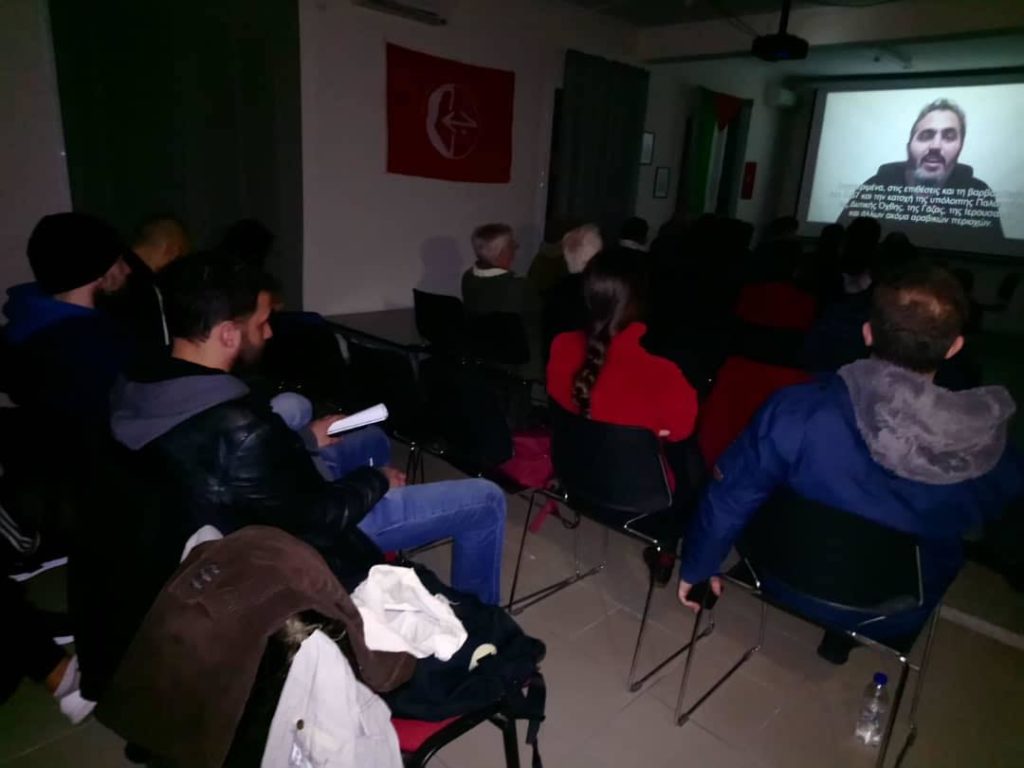 However, he emphasized that “people in Gaza must see that they are not alone. They must be supported by daily, mutual solidarity actions in order to continue their struggle.” He also focused on the importance of supporting Palestinian resistance, especially in Gaza.

“The camp of enemy that we are fighting is imperialism, colonization, exploitation, racism – and we defend the popular classes, the impoverished people, the working classes and their rights…You cannot really stand against the United States without standing for working class rights. We must all be able to fight together in a way that provides clarity in our vision of who we are fighting, why we are fighting and for what. We are still engaged in the struggle for socialism…We are still engaged in the struggle for liberation. Long live international solidarity! The people of Greece and the people of Palestine will always march together,” Barakat concluded. 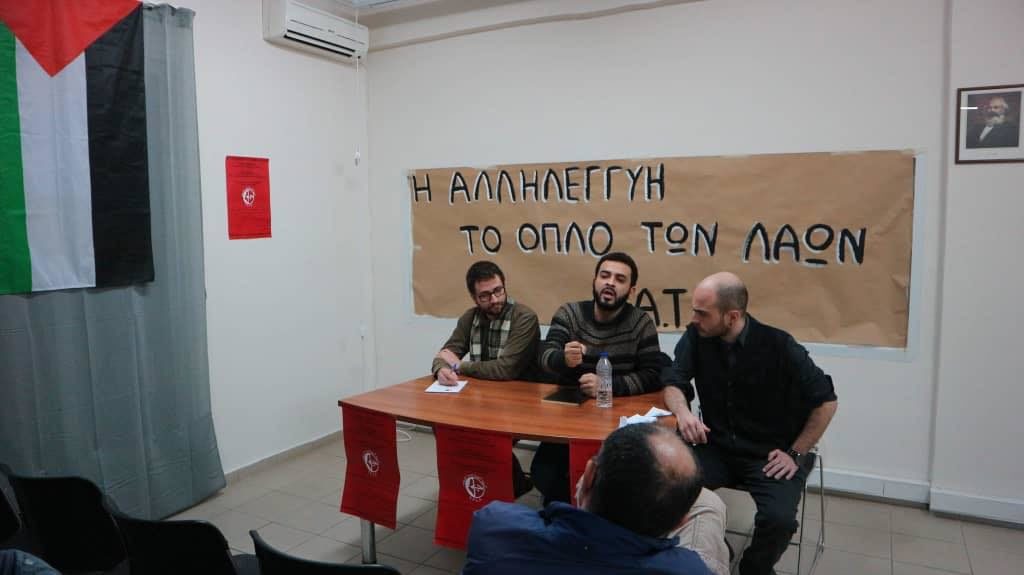 Mohammed Khatib, Europe coordinator of Samidoun Palestinian Prisoner Solidarity Network, spoke about the repression in Europe targeting Palestinians, including a series of attacks on Palestinian organizing and Palestine solidarity in Germany. He highlighted attempts to criminalize the Palestinian struggle, particularly the boycott, divestment and sanctions (BDS) campaign. He also noted that the Israeli state, including its Ministry of Strategic Affairs overseen by right-wing politician Gilad Erdan, is engaged in a direct attack on Palestine organizing internationally.

He noted in particular Barakat’s case in Germany, the political ban imposed on him and the denial of the renewal of his residency visa on the basis of his support for Palestinian liberation and his public speeches and activities. He also noted that this followed upon the case of Rasmea Odeh, former Palestinian prisoner, torture survivor and community leader whose International Women’s Day speech in Berlin was banned by the Interior Senator before her visa was stripped away. 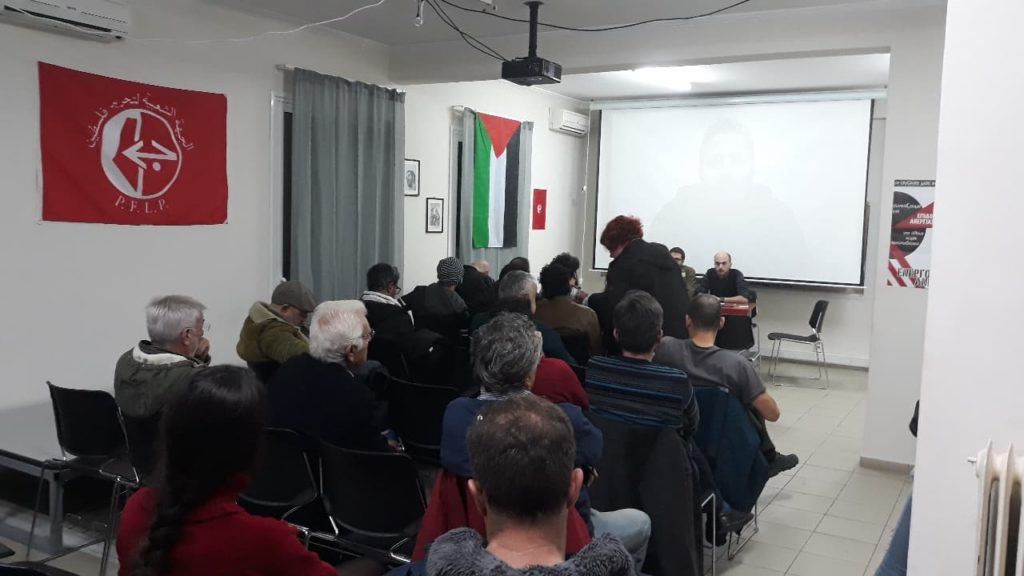 Khatib noted that events like this one in Athens are an important part of our collective resistance against state repression and state violence, from Palestinian communities and social movements across Europe confronting the same imperialist and colonialist forces that attempt to criminalize and repress their organizing.

He spoke about the current right-wing government in Greece and its intensified, fascist policies targeting refugees, the Greek Left and self-organized communities and emphasized the need for joint struggle against the most brutal capitalist forces tied directly to imperialism, noting that these are the same forces seeking to bind the Greek economy to Israeli projects based on the extraction and sale of stolen Palestinian natural gas resources. 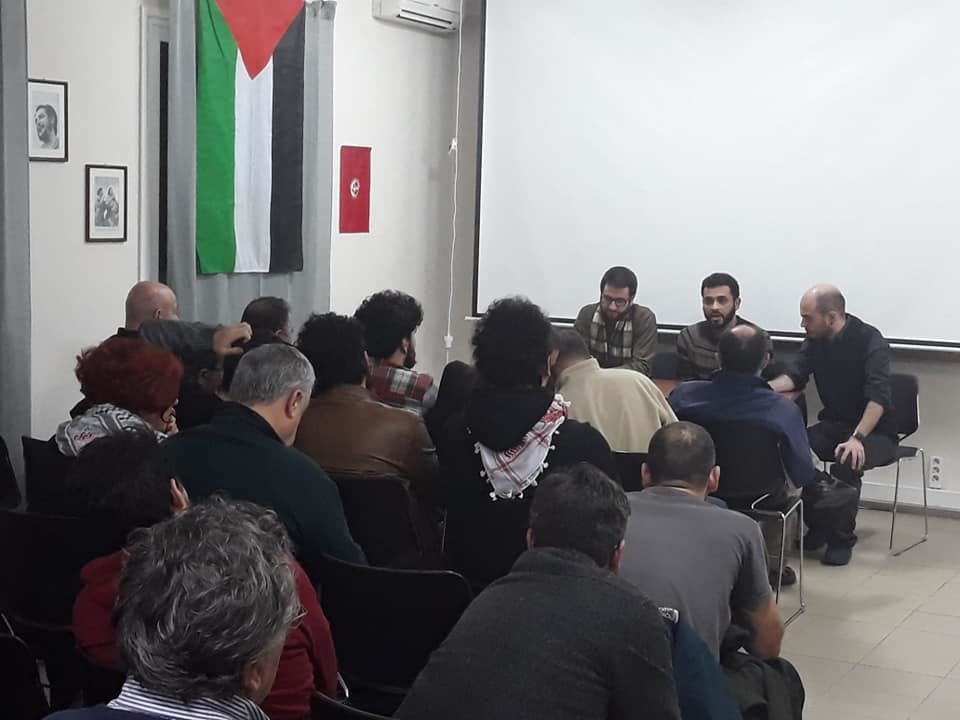 “We call for one united front for Palestine that represents all the organizations who are in the forefront of resistance. They are the representatives of our people and not the PA,” Khatib said. He also criticized the role of the official Palestinian Authority embassy in Greece, saying that it ignores the plight of Palestinians in Greece suffering in containers and tents in refugee camps, instead promoting the PA’s narrow agenda that fails to challenge Israeli colonization, apartheid and racism. 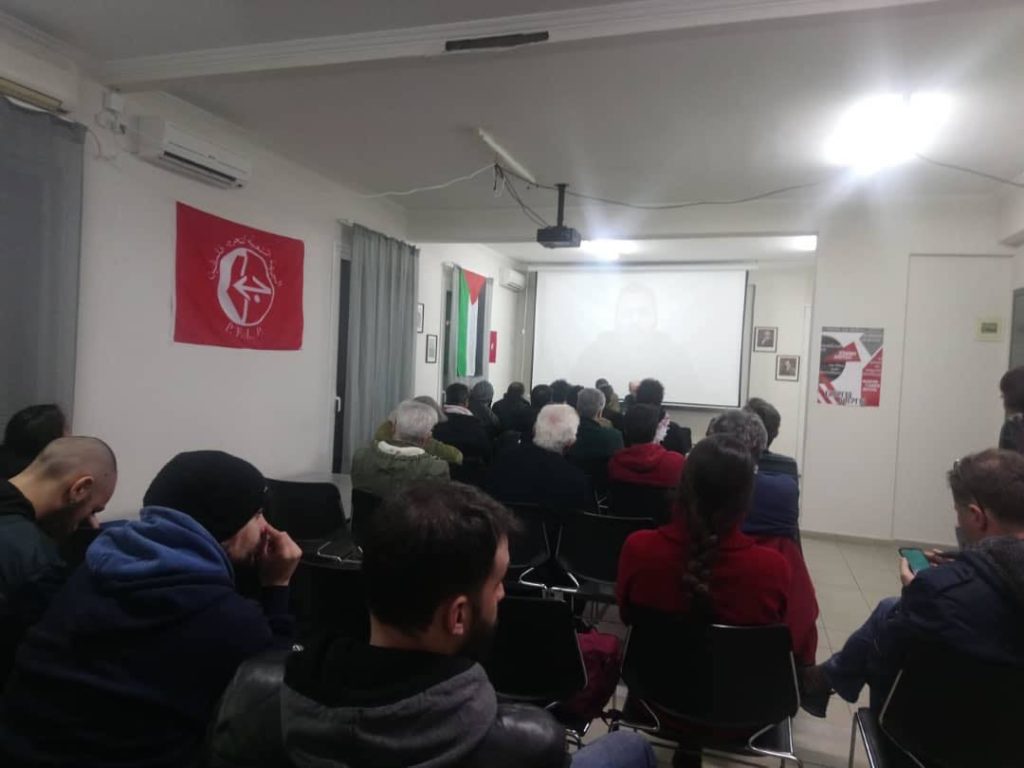 “We are committed to organize and mobilize our people in diaspora to reclaim our role in the national liberation struggle, in all forms, in every country, wherever we are, for our right of return and the liberation of the Palestinian people from occupation – and, at the same time, to join fully in our local struggles against racism, sexism and state violence in Europe and everywhere,” Khatib concluded.

Samidoun Greece will be organizing further events in the coming days and weeks, working with various left organizations in Greece, international movements struggling to free political prisoners in France, Greece, Turkey and elsewhere, and Palestinian and refugee communities mobilizing to defend their rights.