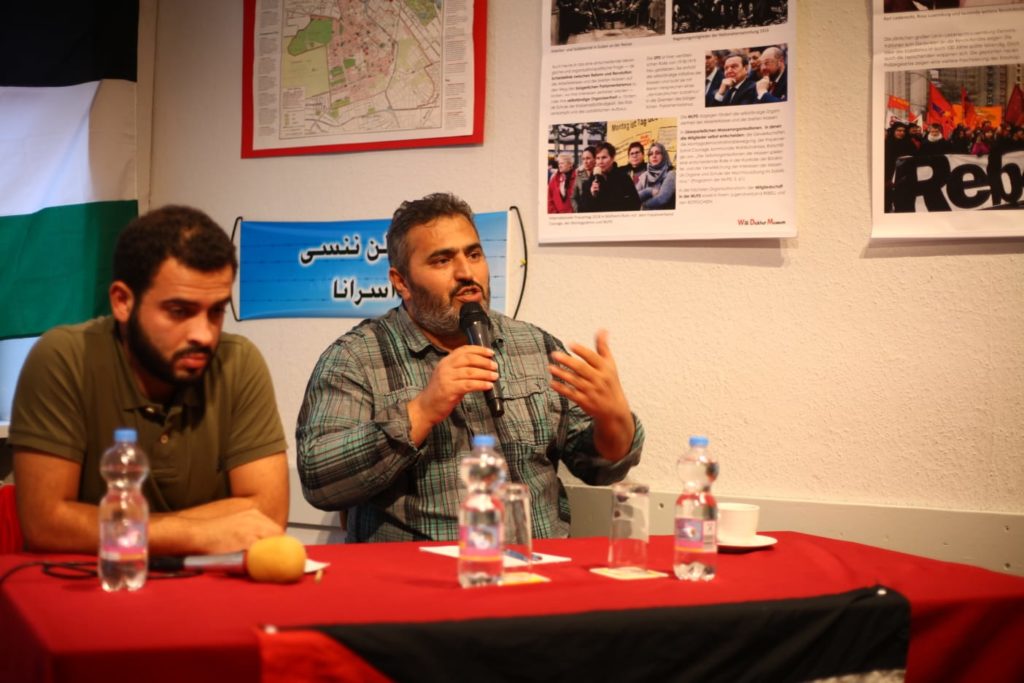 Two events in Berlin on Friday and Saturday, 16 and 17 August, featured speeches by Palestinian writer and activist Khaled Barakat, who was subject to a political ban by the German state preventing him from speaking about Palestine at any public event or activity. Barakat appealed against the political ban in German courts, a move that secured a pledge not to renew the political ban when it expired. Barakat spoke out at these events both to highlight the urgency of the current Palestinian political situation as well as to expose anti-Palestinian repression in Germany. 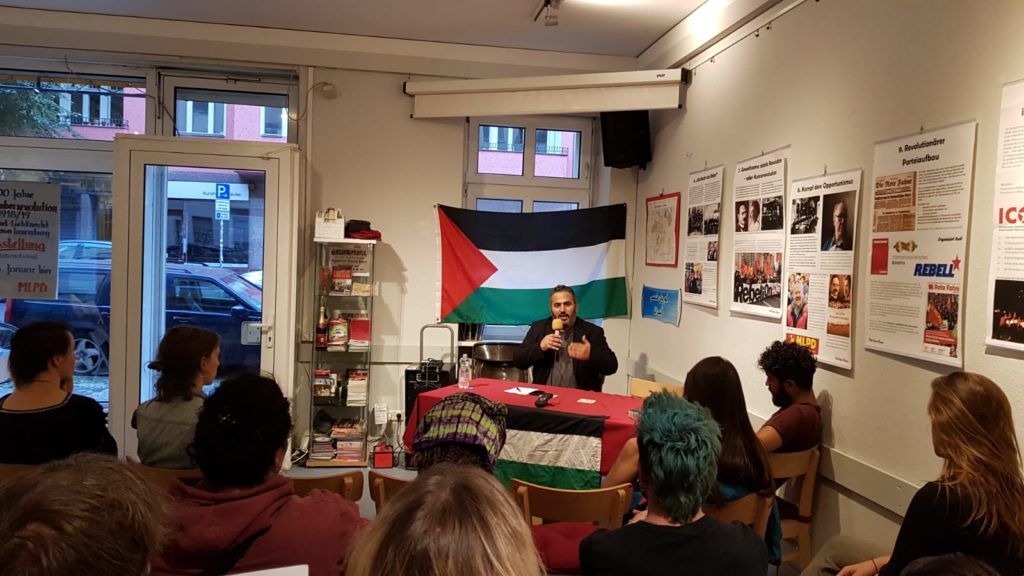 The Saturday event focused on the escalating political repression targeting Palestine organizing in Germany, linking these attacks to racism, imperialism and the rise of the extreme right, while also highlighting the complicity and active involvement of supposedly left parties in attempts to silence advocacy for Palestine. In addition to the political ban imposed on Barakat, recent events have included the deportation of Rasmea Odeh, the passing of an anti-BDS resolution in the Bundestag, the criminal prosecution of Palestinian and Israeli Jewish activists for interrupting a speech by a member of the Knesset, the forced resignation of the director of the Jewish Museum, the closing of the bank account of Jewish Voices for a Just Peace and the disinvitation of international artists who have taken a stand to support Palestinian rights. 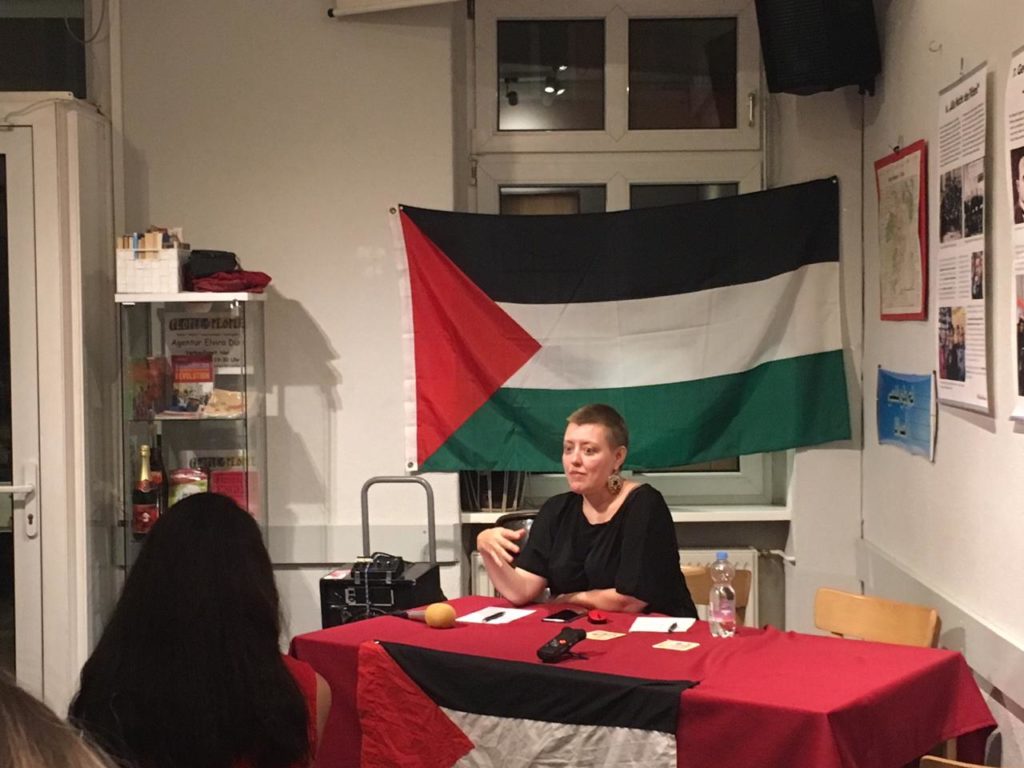 Charlotte Kates, the international coordinator of Samidoun, opened the event with an overview of the current situation around activism for Palestine in Germany, highlighting the connection between racism, colonialism and the attacks on Palestinian rights. She also presented historical photos and posters reflecting the past involvement of German left movements of the 1970s and 1980s in strong support for the Palestinian struggle, including prominent campaigns to boycott Israel at the time of the first Intifada. She also detailed the political nature of some of the latest attacks on Barakat from German authorities.

After the expiration of the political ban, the German state reiterated the same arguments once again, adding repeated citations to the May 2019 anti-BDS Bundestag resolution in another document issued on 1 August, declaring that Barakat’s residence permit would not be renewed. This document also declared that referring to Israel as a “racist project” was “clearly anti-Semitic,” while failing entirely to cite any actual anti-Semitic content in the numerous referenced interviews and speeches Barakat made. It stated that critiques of the nature of the Israeli state can only be made “when the right of Israel to exist is recognized,” a particularly racist demand to impose upon a Palestinian. 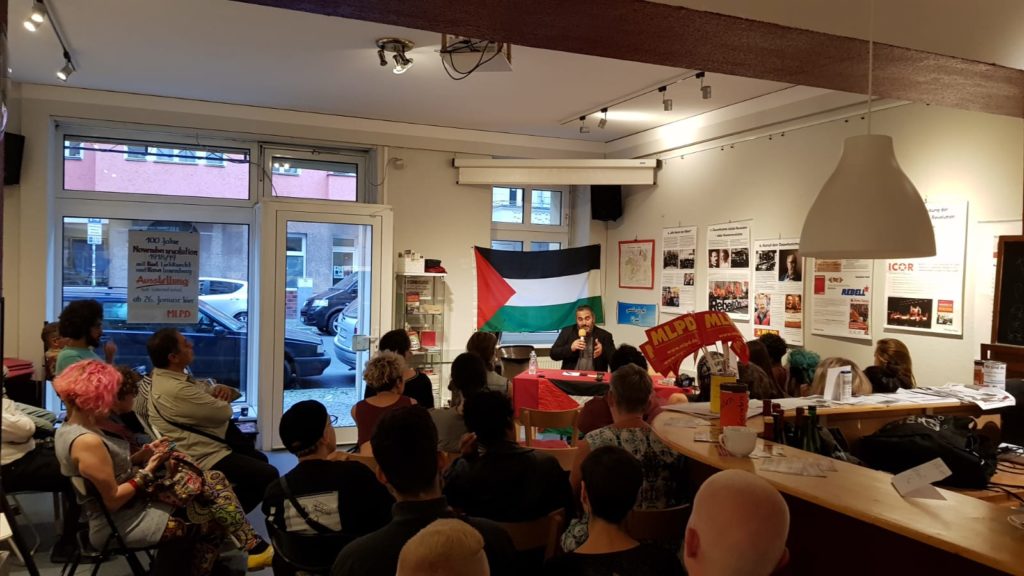 Barakat focused in his own presentation on presenting a vision towards a liberated Palestine on the entire land of Palestine from the river to the sea, embracing a democratic, inclusive vision for a Palestinian revolutionary future. He emphasized that no political ban or repressive measures would stop him or, more fundamentally, the Palestinian people and their national liberation movement as a whole, from speaking about and struggling for justice. Instead, he noted, it only made clear once again that any expressive activity by the Palestinian people and the growing solidarity movement is seen as an existential threat by the Zionist state as well as by the imperialist and colonialist states that support it.

He reaffirmed the rights of the Palestinian people to resist occupation and seek their liberation by any means necessary, including armed struggle, underlining the goals of the Palestinian people for return and liberation. Barakat also emphasized the importance of the BDS campaign and the boycott movement, especially on an international level, in building material solidarity with Palestine. 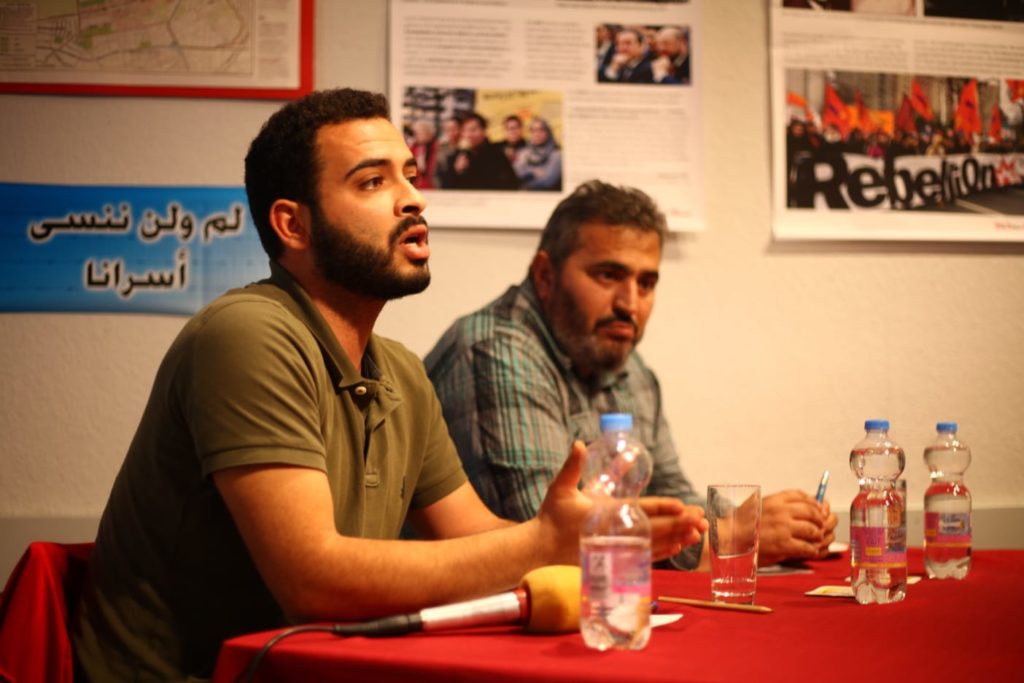 Mohammed Khatib, the European coordinator of Samidoun, spoke about the need to confront European colonial policies in Palestine and around the world, linking European colonialism in the region with anti-refugee and racist policies inside Europe itself. He emphasized that Europe’s wealth stemmed from the exploitation of colonized peoples around the world, including people within Europe’s borders. He also focused on the importance of a clear, principled approach to supporting Palestine, declaring firmly that neither he nor the Palestinian people would recognize “Israel’s right to exist” on stolen land, built on the dispossession and displacement of the Palestinian people. A Palestinian refugee from Lebanon, he also discussed the popular movements in the camps in Lebanon and the importance of supporting their struggle for dignity and return.

Nadija Samour, a human rights lawyer who represents Barakat, spoke about the legal situation on an international level as well as within Germany, providing a comprehensive analysis of the rights of states versus those of people and emphasizing the various forms of attack that defenders of Palestinian rights are facing in Germany today. She underlined the fundamental human rights issues involved in this repression, including violations of Germany’s obligations under international law and the conventions it has committed to. 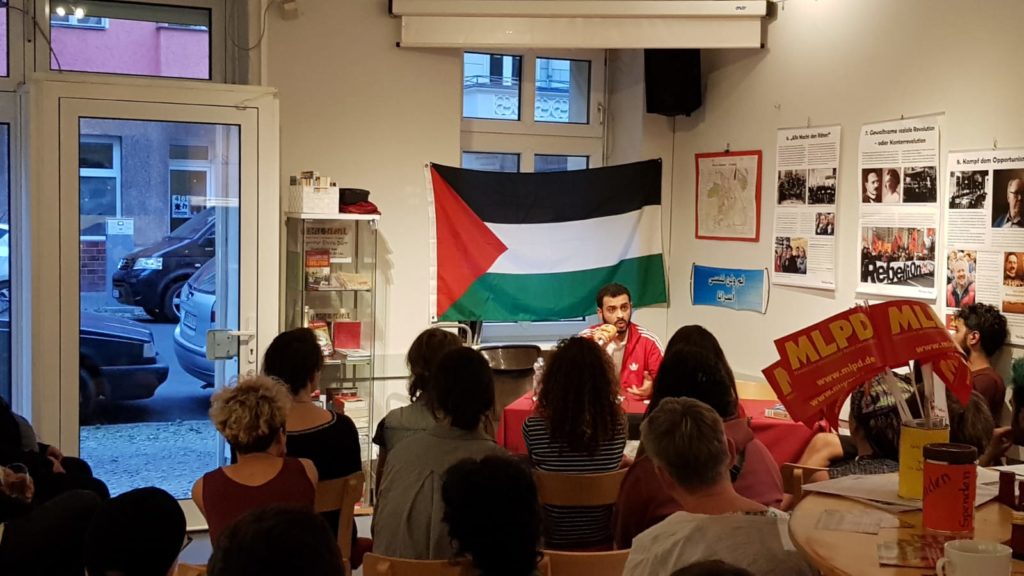 The event concluded with a lively discussion about bringing movements together to fight all forms of racism and oppression, the importance of confronting German imperialism and challenge escalating political repression. Participants noted that the upcoming Pop-Kultur Festival in Berlin, co-sponsored by the Israeli Embassy, is the focus of a growing boycott campaign not only in Berlin but at an international level, as artists of conscience around the world refuse to participate. They discussed successful, movement-building actions like the campaign to support Rasmea Odeh, the response to the anti-BDS resolution and the #BDSYes bloc at the Radical Queer March, emphasizing the need to build on these actions to work politically, legally and culturally to support Palestinian liberation.