Samidoun Palestinian Prisoner Solidarity Network supports this important campaign, being organized by Al-Awda:The Palestine Right of Return Coalition and the Palestinian Youth Movement in partnership with Al-Naqab Center in Burj Al-Barajneh Refugee Camp and the Palestinian Cultural Club in Al-Baddawi and Mar Elias Refugee Camps in Lebanon. Supporting the steadfastness of Palestinian refugees – particularly at this challenging time – is critical to sustaining the struggle for the right to return and the liberation of Palestine. Visit the Al-Awda site to donate: https://al-awda.org/donations/support-palestinian-refugees/ 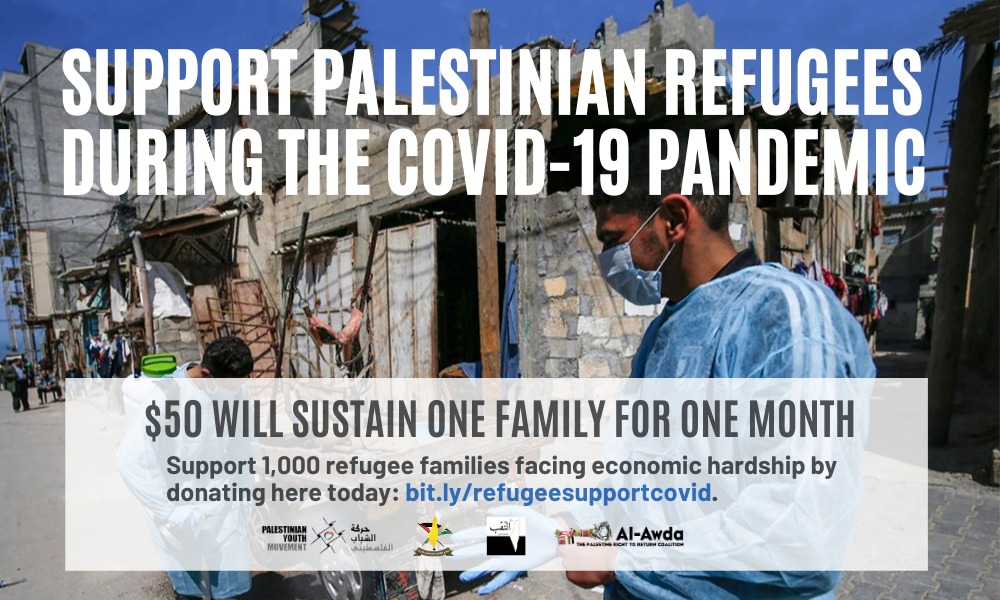 Donations to this campaign are zakat-eligible.

All donations to this campaign are U.S. tax deductible. Your contributions are handled by Al-Awda, the Palestine Right to Return Coalition (PRRC), a U.S.-based, registered 501(c)(3) non-profit organization.

This global pandemic caused by COVID-19 poses a detrimental threat to refugee camps in Lebanon. The refugees in these Palestinian camps, who already face overcrowding, poverty, mass unemployment, and insufficient infrastructure, are not able to withstand the economic impact of this public health crisis with the camps shutting down and refugees losing their jobs. If we don’t act now, we might face a total human disaster.

In order to help the refugees practicing social distancing, we are calling on you to help provide food packages, each containing essential food items and sanitizing supplies to last about a month. Each package costs approximately $50. Please donate today to support Palestinian refugees in Lebanon during this global pandemic.

In light of the novel COVID-19, Al-Awda:The Palestine Right of Return Coalition and the Palestinian Youth Movement are organizing this emergency relief fundraiser in partnership with Al-Naqab Center in Burj Al-Barajneh Refugee Camp and the Palestinian Cultural Club in Al-Baddawi and Mar Elias Refugee Camps to support the refugee camps of Lebanon. The purpose of this campaign is to raise $50,000 that will be used to buy food packages for families that reside in Beddawi, Burj Al-Barajneh, and Mar Elias refugee camps.

Each package is $50 (75,000 Lebanese Lira), and 1,000 families in the camps will be reached by this campaign. Your contribution will both provide basic essentials that are not supplied by aid organizations and alleviate the need to leave home for these necessities.

The Call from Palestinians in Lebanon:

Disease and poverty have riddled Lebanon for many years, hitting the refugee camps the hardest, placing all our Syrian and Palestinian people in the same fate. Discrimination by the Lebanese government coupled with overcrowding, mass unemployment, and insufficient infrastructure, COVID-19 poses a detrimental threat to such vulnerable communities. We are calling on you to help provide food packages, each lasting about a month, to 1,000 families especially experiencing economic hardship. Each package costs approximately $50 and contains essential food items: rice, sugar, oil, noodles, pasta, lentils, bulgur, beans, hummus, mortadella, pandora, molasses, cheese, and tea, all of which will be purchased from businesses within the camps to support the community’s economy.

All these restrictions, along with a lack of coherent legal channels to deal with the plight of the Palestinian refugees, pushed the camps to rise up against these racist practices by the Lebanese state. The camps went on strike and demonstrations spread to all Palestinian communities, which directly impacted economic activity inside the camps, yet no response came from the Lebanese state.

Palestinians did not leave the protests inside the camps until the Lebanese uprising erupted widely, which led the country to a complete halt, affecting Palestinian and Lebanese workers alike. A declining economy and collapsing banks with liquidity shortages also led to strikes by the middle class in the camps that had some money in the banks or who were still employed by international organizations.

These rapid developments exhausted any savings of the Palestinian refugees and impoverished the working class of the camps even further. As a result, this continued depletion of resources did not allow for those inside the camps to be ready to withstand the Coronavirus crisis, leaving thousands of families with no support after more than a year of economic crises.

These difficult circumstances should warrant the intervention of UNRWA and other international organizations, as they warranted the creation of internal and external links of solidarity to save what is left to be saved.

Consequently, many Palestinian institutions and volunteer teams have fought with great courage to fill the deficit and alleviate the dire effects of the economic crisis in the camps. Some of these organizations are the Palestinian Cultural Club and the Alnaqab Center for Youth Activities, which have been working hard to contribute as much as they can to the communities within which they operate (Beddawi Camp, Mar Elias Camp, and Burj Al-Barajneh Camp).

Throughout the crisis, the Palestinian Cultural Club and Alnqab Center have focused their energies on distributing food rations, hot meals, and some medical supplies. While the Palestinian Cultural Club’s work has been focused on the Beddawi and Mar Elias camps, the Alnaqab Center volunteers have been involved since November 2019 in a youth initiative (“Tabkhet al-Khair”) within the Burj Al-Barajneh camp seeking to support our people with food supplies. However, this type of work, in addition to the hundreds of male and female volunteers on the ground, needs constant support.

Therefore, we at the Palestinian Alnaqab Center and the Palestinian Cultural Club, invite you to contribute with in-kind and material donations so that we or the many other groups working on the ground are able to continue our efforts in support of our people.