Home News Video: Liberate Palestine: From the River to the Sea webinar with Khaled... 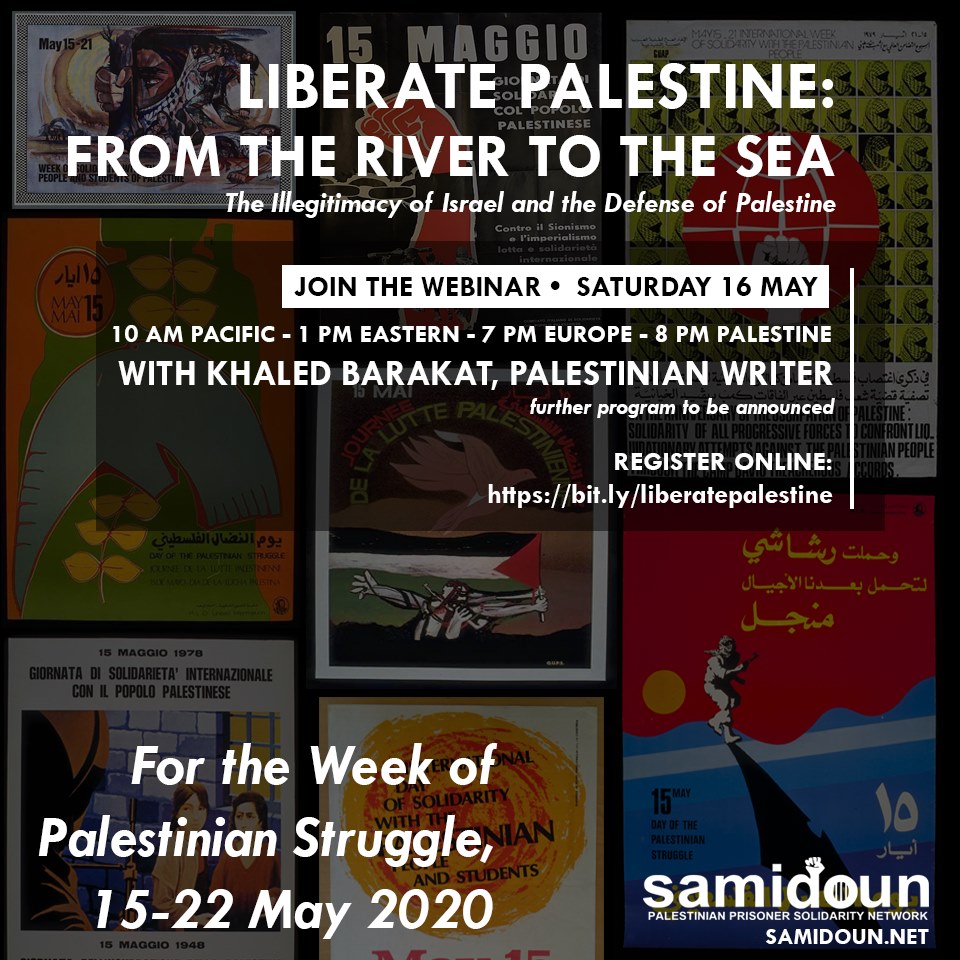 On Saturday, 16 May, Samidoun Palestinian Prisoner Solidarity Network hosted a webinar with Palestinian writer Khaled Barakat, focusing on the theme of the liberation of Palestine from the river to the sea. The event came as part of the Week of Palestinian Struggle, a series of online and in-person actions to support the liberation of Palestine as we mark the 72nd anniversary of the ongoing Nakba. The webinar was conducted over Zoom and streamed live simultaneously on the Samidoun facebook page.

During the event, live translation to French was provided by solidarity translators; the interpretation was organized by the International League of People’s Struggles in Canada, an international alliance of people’s movements confronting imperialism, capitalism and oppression around the world. Samidoun is a member of ILPS, which has also provided an informative archive of webinars organized by groups and movements around the world.

This webinar comes as one of many taking place amid commemorations of the Nakba and ongoing Palestinian resistance and struggle. On Sunday, 17 May, there will be an Arabic-language webinar at 11 am Pacific/3 pm Eastern/8 pm central Europe/9 pm Palestine with Fawzi Ismail, president of the Union of Palestinian Communities and Associations in Europe, discussing the role of the Palestinian community in exile and diaspora in the struggle for liberation and return, organized by Samidoun in Palestine and partner organizations. The webinar will take place on Zoom.

Also on Sunday, 17 May, Al-Awda, the Palestine Right to Return Coalition will host an English-language online rally for Palestine, “Commemorating 72 years of Nakba, Marching Toward Return.” Mohammed Khatib of Samidoun will be one of the speakers in the rally, which will also be accompanied by a panel discussion on the Nakba, the Palestinian right of return, and the current political situation threatening the liquidation of the Palestinian cause. Speakers will include Rabab Abdulhadi, Diana Buttu, Ahlam Muhtaseb, Hatem Bazian, Hatem Mohtaseb, Lamis Deek, Nerdeen Kiswani, Taher Herzallah, Amer Zahr, Carlos Latuff and Kameron Hurt. Interested participants can register to join the Zoom webinar at https://bit.ly/alawda72 or watch online at the Al-Awda PRRC facebook page.