The following statement was issued by ILPS Canada. Samidoun Palestinian Prisoner Solidarity Network is a member of the International League of Peoples’ Struggle, an alliance of organizations and movements that promotes, supports and develops the anti-imperialist and democratic struggles of the peoples of the world against imperialism and all reaction. 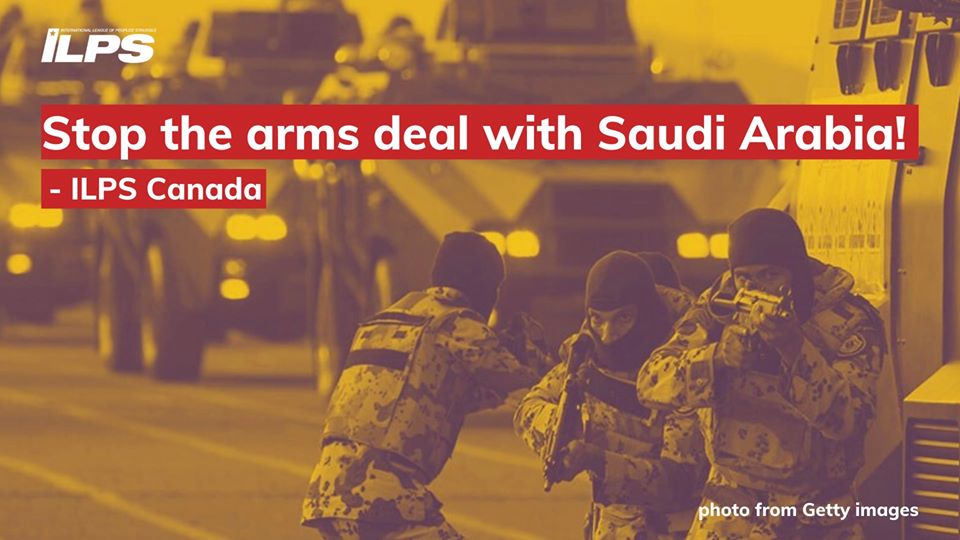 After stalling for two years, the Canadian government has renegotiated a sale of light armored vehicles to Saudi Arabia for $14 billion. The deal was put on hold in 2018 because of political pressure against Saudi Arabia’s war on Yemen and the murder of Jamal Khashoggi, a journalist. This news is jolting because, in December 2018, Prime Minister Justin Trudeau had said he would not go ahead with the sale. However, the Minister of Foreign Affairs Francois-Philippe Champagne announced that the contract was back on the table on Thursday, April 9, 2020.

The government claims it must proceed with the deal because thousands of jobs and substantial revenues might otherwise be lost. General Dynamics is the supplier building the vehicles to be sold. The government its sales rep, General Dynamics stands to lose profits from the transaction. However, it could be involved in the manufacture of other machinery for domestic and foreign use.

In response to the objection that the items to be sold to Saudi Arabia will likely be used for war, Minister Champagne tells the people not to worry. ““Under our law, Canadian goods cannot be exported where there is a substantial risk that they would be used to commit or to facilitate serious violations of international humanitarian law, international human rights law or serious acts of gender-based violence.” (The Defense Post, April 10, 2020). If that is the case, then, no military items should be exported. Champagne added that there are protections in that export permits be delayed or canceled if it learns of goods sold not used for the buyers’ stated purposes. Well, it is pretty clear that military items are for military use, just as it is clear that Saudi Arabia is an aggressor who will likely use military equipment in its aggression against Yemen and elsewhere. Saudi Arabia is committing human rights violations and crimes against humanity. The fact that the war inhibits health care and safety responses to COVID-19 is even more reprehensible.

The Canadian Chapter of the International League of Peoples’ Struggles has opposed all military contracts with Saudi Arabia all along. We have stood in solidarity with the people of Yemen who have been suffering under assault after assault by Saudi forces, calling for Saudi Arabia keep its hands off Yemen. According to Dr. Yahyia Mohammed Saleh Mushed of the Union of Arab Academics at Sana’a University, the war has displaced around 200,000 people and left the country in misery (Sanctions Kill webinar, May 31, 2020). We deplore the coalition states (US, UK, France and Canada) that arms and supports these assaults. Furthermore, we find no justify for the blockade against Yemen, and join in the calls for the illegal economic coercive measures against Yemen and all countries to be lifted, especially in view of the humanitarian concerns during a pandemic.

Canada has been on the war path for the past two decades. It stands by the US imperialist war machine steadfastly and plays a deadly role as its most fervent ally. It itself is an imperialist state with ambitions for market expansion abroad. Prime Minister Justin Trudeau voices intolerance against states that dare to follow an independent course away from the dictates and norms set by the US. His negative relations with Venezuela are the starkest example. Also, his government has been increasing the national military budget and expanding the Canadian armed forces, favouring more active engagement. Money for health care and housing has been siphoned for the folly of war.

Now with the determination to rise against domestic militarization and resist its racist blades, let us also decry international militarization and organize to dismantle NATO, the US military bases and imperialist military agreements, and send the troops home. Let us expose and put pressure against the arms trade that encourages instability and feeds off bloody conflict. Let us call for a reduction of military budgets and redirect more tax money into social services and regional economic development.

Stop the Sales of Arms to Saudi Arabia!
Reject the arms trade!
Stop US and Canadian imperialism!
Dismantle NATO!
Close all foreign military bases!
End the coercive economic measures against all targeted countries!