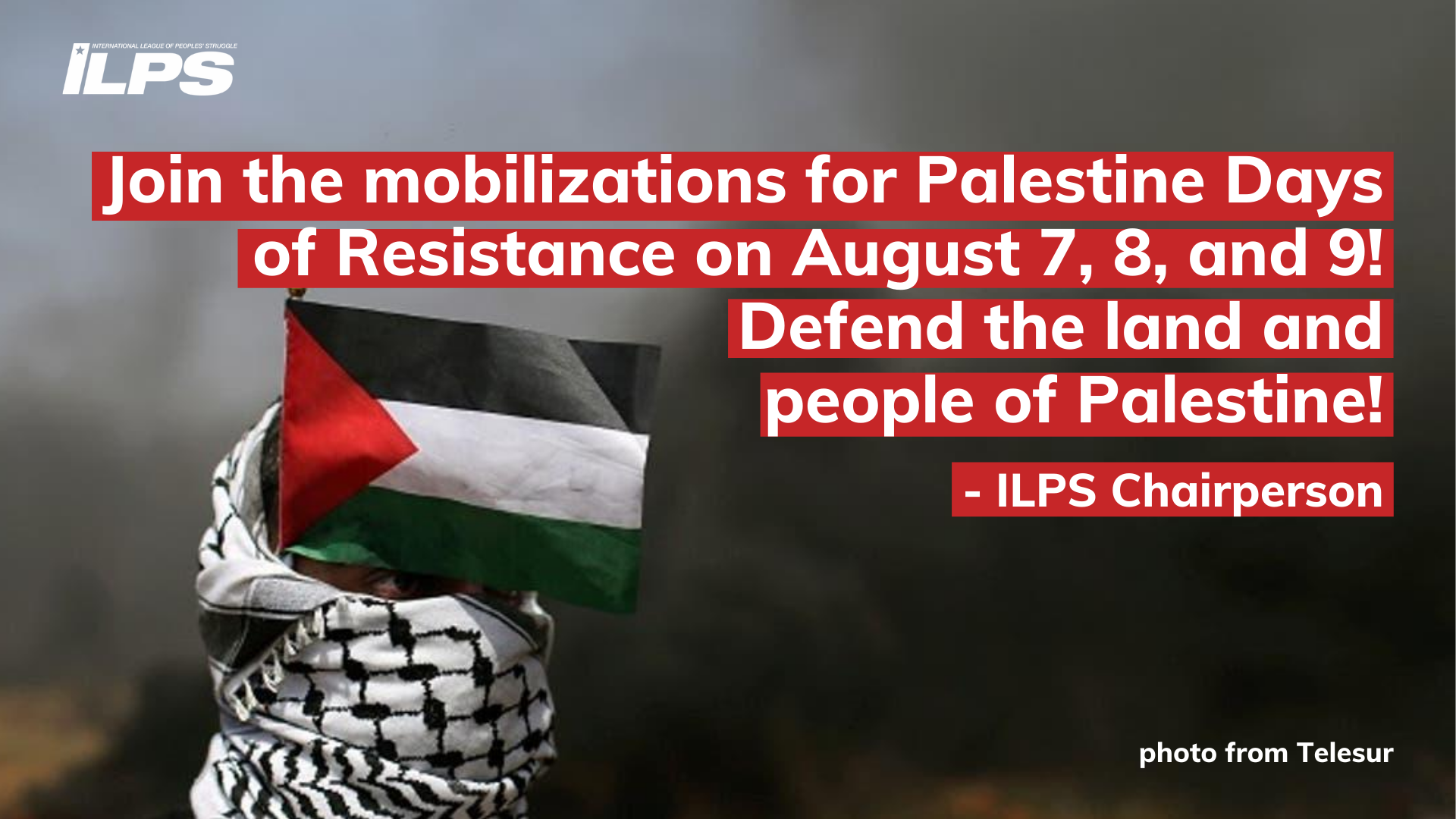 Samidoun Palestinian Prisoner Solidarity Network welcomes the call from the International League of People’s Struggle to join the Days of Resistance on August 7-9! The Days of Resistance have already been endorsed by over 100 organizations around the world. Samidoun is a member organization of ILPS and we look forward to coordinating together to build these days of struggle around the world!

Get involved in the Days of Resistance:

JOIN THE MOBILIZATIONS FOR PALESTINE DAYS OF RESISTANCE ON AUGUST 7, 8, and 9! DEFEND THE LAND AND PEOPLE OF PALESTINE!

The International League of Peoples’ Struggle stands in steadfast and militant solidarity with the Palestinian people in their fight against various forms of imperialist-Zionist aggression in their lands. Drawing strength from the July 1 Day of Rage which has forged a wide unity among global mass organizations, peace advocates, and activists, the ILPS pledges its continued unity to defend the land and people of Palestine in the Days of Resistance on August 7, 8, and 9.

Today, the Imperialist-Zionist Annexation plan continues to threaten the Palestinian people in the West Bank, including the most fertile agricultural land of Jordan Valley, which is still slated for Israel’s latest land grab. Hatched by Israeli Prime Minister Netenhayu, “Alternate Prime Minister” Gantz, and backed by US President Donald Trump, this plan is nothing but an attempt to legitimize and continue the over 72 years of colonization, apartheid, genocide, land theft, and ethnic cleansing of Palestine. US-backed Israel terrorists have exercised de facto control over the the annex parts of West Banks and Jordan Valley through settlements, checkpoints, segregated roads, occupation army, and even ‘security control’ over the Palestinian Authority.

Despite the massive condemnation and successful demonstrations held on July 1, activists in solidarity with Palestinians have been arrested and criminalized such as our dear comrades from the Collectif Palestine Vaincra who have organized their own protests in Toulouse, France. These attempts to ban demonstrations for Palestine took place after the European Court of Human Rights condemned France for its violations of freedom of expression and right to demonstrate. It must also be noted that until today, the government of France has also continues to imprison Georges Ibrahim Abdallah, a Lebanese Arab activist for Palestine who has been jailed for 35 years.

The ILPS, since its inception, has been firm and consistent in the struggle against US-led imperialism that manifests through the decades-long Zionist project, occupation and war crimes in Palestine.

In this light, the ILPS calls on all its member organizations and allied networks to be one with the call of the Palestinian people to stand for justice, land, and life in the Days of Resistance on August 7, 8, and 9, 2020. Let us organize mobilizations, political, cultural and media activities around the world. On these days, we also commemorate the historical contributions of Palestinian revolutionaries and martyrs who have offered their lives fighting for the liberation of Palestine. Let us highlight their struggles along with those of the Palestinian prisoners, in exile and diaspora, and those in refugee camps.

The people in this decades-long occupied nation have remained resolute in fighting for their homeland. The ILPS stands with the people of Palestine in their struggle for self-determination and genuine liberation.

From the river to the sea, Palestine will be free! Long live international solidarity!