Home News Open letter to progressives: The ADL is not an ally 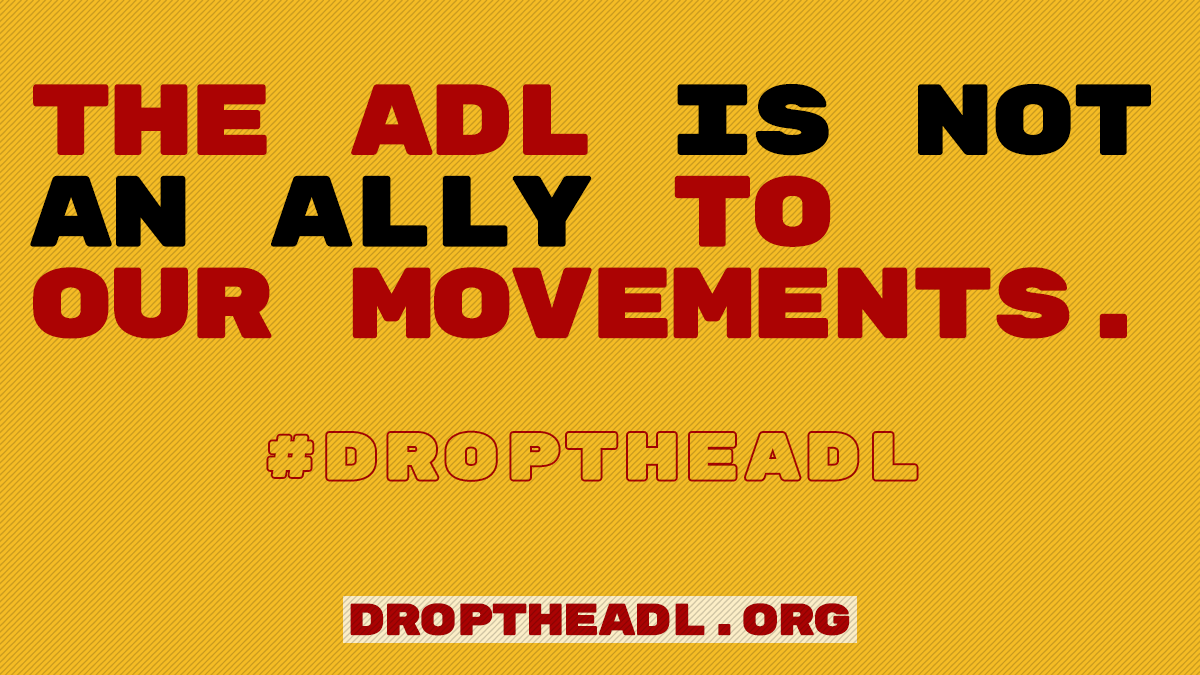 Samidoun Palestinian Prisoner Solidarity Network is one of the signatories of this call to progressive organizations and social justice movements, especially in the United States, to Drop the ADL. 100+ racial, economic, and social justice organizations and coalitions have issued an open letter with an accompanying primer encouraging community institutions and organizations to rethink their relationships to the Anti-Defamation League (ADL). The letter comes in response to the ADL’s history of targeting and co-opting movements for justice—particularly those led by communities of color—and advancing Islamophobia, policing, and global militarism while projecting a false badge of progressivism:

We are writing to ask you to reconsider the Anti-Defamation League (ADL) as a partner in social justice work.

Many organizations in our communities find themselves in spaces with the ADL, using its anti-bias education materials, or counting on the ADL to support our political goals. In light of a growing understanding of the ADL’s harmful practices, many progressive groups are rethinking those relationships.

Even though the ADL is integrated into community work on a range of issues, it has a history and ongoing pattern of attacking social justice movements led by communities of color, queer people, immigrants, Muslims, Arabs, and other marginalized groups, while aligning itself with police, right-wing leaders, and perpetrators of state violence. More disturbing, it has often conducted those attacks under the banner of “civil rights.” This largely unpublicized history has come increasingly to light as activists work to make sense of the ADL’s role in condemning the Movement for Black Lives, Palestinian rights organizing, and Congressional Representative Ilhan Omar, among others.

We are deeply concerned that the ADL’s credibility in some social justice movements and communities is precisely what allows it to undermine the rights of marginalized communities, shielding it from criticism and accountability while boosting its legitimacy and resources. Even when it may seem that our work is benefiting from access to some resources or participation from the ADL, given the destructive role that it too often plays in undermining struggles for justice, we believe that we cannot collaborate with the ADL without betraying our movements.

This primer lays out some of the ADL’s practices. We hope this can open conversations about this important issue.