Home News No to normalization, escalate the boycott: Confronting the US-Israel-UAE agreement 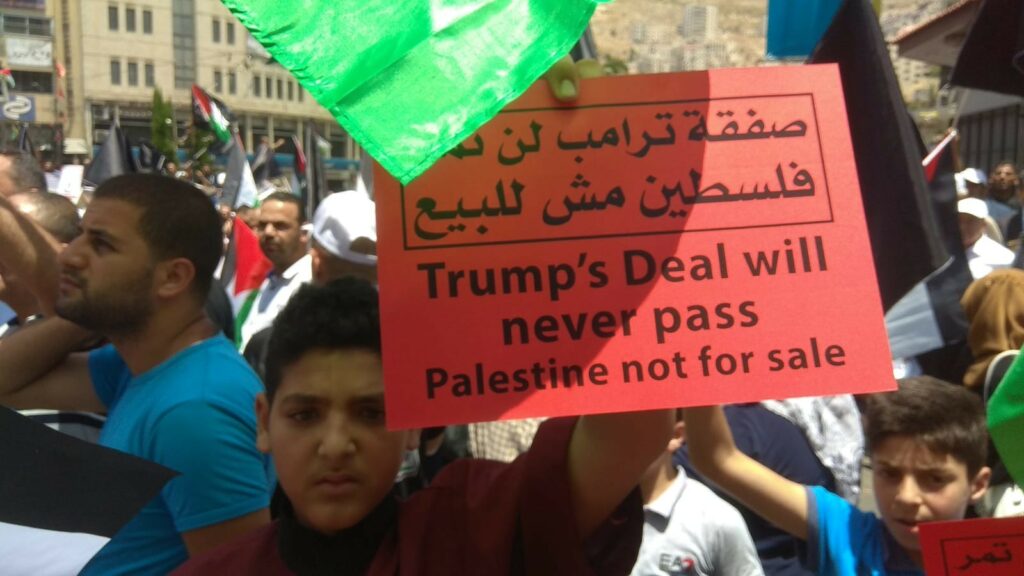 Samidoun Palestinian Prisoner Solidarity Network expresses its clear rejection of yet another sham of injustice, repression and capitalist exploitation, the so-called “diplomatic breakthrough” between the United States, Israel and the United Arab Emirates. In reality, this provides no peace and no justice, just a plan for continued collaboration between the forces of imperialism, Israel, Zionism and Arab reaction, along with escalated war on the Palestinian people and all people of the Arab region.

We stand firmly together with the Palestinian people and all progressive and anti-imperialist forces in the region against every form of normalization with Israel, including those of the Palestinian Authority.

The camp of aggression – imperialism, Israel, Zionism and Arab reaction – has dismantled the unity of peoples in the region and opened its people and resources for exploitation by local and global capitalist forces, to the benefit of the Zionist project and imperialism globally. The statement from the UAE, the U.S. and Israel is perhaps the clearest expression of the forces confronting the Palestinian people and all forces seeking justice and liberation throughout the region.

The triangle of normalization: An assault on the Palestinian people

This is only another part of triangle of normalization, represented by Camp David, Wadi Araba and Oslo, the so-called “peace” agreements brokered by the U.S. with Egypt, Jordan and the P.A., at the expense of the Palestinian people, the Arab people and the people of the region and the world. It is not only this latest agreement with the UAE that must be brought down, but this entire mechanism of injustice that falsely gives the name “peace agreement” to alliances for further colonization, war and apartheid. The UAE’s clear complicity in ongoing crimes against the Palestinian people is only made clearer through Trump’s announcement.

All of the reactionary Arab regimes that engage in these normalization projects – now including the UAE, as well as the P.A. – claim to pursue them for the benefit of the Palestinian people. In reality, the Palestinian people share a broad consensus in rejection of all of these normalization projects that come only at their expense. This agreement does not even pretend to stop the ongoing annexation and Zionist colonization of Palestinian land, merely to “suspend” it, attempting to provide Arab legitimacy to an illegitimate settler-colonial entity in Palestine.

On one hand, this announcement reflects the petty interests of the Trump administration in boosting a sagging re-election campaign. But it also reflects the long-term commitment of U.S. imperialism to divide, repress and exploit the people of the region and their resources, with the Israeli settler-colonial project forming the sharp edge of imperial domination while local agents, particularly monarchies, reaped personal wealth from their deals with imperialism.

The UAE has long been engaged in overt and covert normalization with Zionism, just as it has played a reactionary role throughout the region. The UAE remains directly involved in the so-called coalition waging war on the people of Yemen in an attempt to maintain imperial domination in line with the interests of fellow reactionary regimes, such as that of Saudi Arabia.

The UAE has played a dominant role in the manipulation of Egyptian politics, propping up the Sisi Camp David regime, which imprisons thousands of political prisoners in Egyptian jails while hailing the latest move toward normalization. This is not to mention the enrichment of the UAE ruling class at the behest of imperialism while engaging in the most brutal practices of super-exploitation of international migrant laborers and attempting to silence all criticism, let alone organizing efforts.

While the public announcement reflects a new step toward official normalization, the relationship between the U.S., UAE and Israeli state is nothing new. UAE and Israeli officials met in 2016 to undermine the Iran nuclear agreement and reimpose sanctions, building on previous alliances for the sale of advanced U.S. military technology to the UAE with the full support of the Israeli state. As noted in The Electronic Intifada, “These secret relations have included military and intelligence cooperation and even joint military exercises. The ground for Thursday’s announcement was laid in recent years with athletic competitions and business cooperation. Just weeks ago, an Emirati firm struck a deal with two Israeli arms giants…”

Such normalization projects represent only the narrow interests of the reactionary ruling class of these regimes, not the people of the Gulf. It is the responsibility of all forces that stand with the resistance to make clear that the masses of the people stand firmly against colonization and imperialism, and to escalate all forms of boycott and isolation of the Israeli regime and its partners in colonization.

Further, we note that as the U.S. announces this latest attack on the Palestinian people alongside the UAE and the Israeli state, we see that it is also ramping up its sanctions on Syria through the “Caesar Act” while threatening even more sanctions on Lebanon, only one week after the devastating Beirut explosion, in an attempt to enforce total compliance with Zionist colonialism and imperial domination throughout the region.

The U.S. and its partners also continue to escalate their war threats and brutal sanctions against Iran, a project in which both the Israeli state and the UAE are fully engaged. This represents not only a threat to Iran but to all forces in the region and internationally that chart any course independent of imperialism. One of the most important responses to this latest attack on the peoples of the region at the hands of Israel, Zionism, imperialism and Arab reaction is to fight to end all sanctions on Lebanon, stop new sanctions from being imposed, end the sanctions on Syria and end the war drive and sanctions on Iran. All of these unilateral coercive measures are part of an illegal imperial war of aggression being carried out through economic means as well as direct military attacks.

Confronting the Attack, Escalating the Boycott

This announcement further makes clear our responsibility to take action and intensify the boycott campaign against Israeli products, cultural institutions, academic institutions and complicit corporations. Normalization of colonialism must be met – and can be defeated – with popular anti-normalization, boycott and confrontation, and the international isolation of Israel. By building the boycott campaign on a popular level, as well as the official one, we can elevate solidarity with the Palestinian people and undermine these destructive normalization projects.

There is a powerful international example – the Plurinational State of Bolivia, under legitimate President Evo Morales, cutting ties with Israel, expelling its ambassador, and formally declaring the settler-colonial entity “a terrorist regime.” A key part of the strong support for Palestine and its national movement shares by progressive governments and popular movements across Latin America, this clear declaration of sovereignty and rejection of colonialism was almost undoubtedly a factor in the U.S. support for the coup regime that targeted the Morales government in November 2019, alongside the Bolivian government’s commitment to sovereign resource development and rejection of U.S. domination. Indeed, only weeks after the coup, its self-proclaimed officials announced their renewed ties with the Israeli regime.

The people of Bolivia have not given up and continue to struggle to bring down the coup regime. Standing in solidarity with the Bolivian people’s fight against the coup and against imperialism in Latin America is part and parcel of building a meaningful boycott movement for the international isolation of Israel.

Further, we urge all supporters of Palestine around the world to organize demonstrations and actions outside U.S., Israeli and Emirati embassies to hold them accountable for their ongoing crimes against the Palestinian people and denounce their active participation in the violation of Palestinian rights, including the detention of thousands of political prisoners, the demolition of homes, extrajudicial executions, the siege on Gaza, the confiscation of land, the construction of settlements, the apartheid regime ruling over Palestinians in ’48 and the denial of the right to return of millions of Palestinian refugees.

The boycott of the masses is stronger than the normalization projects of Israel, Zionism, imperialism and Arab reaction. This agreement must only strengthen our resolve to mobilize, organize and act to defend Palestine, confront imperialism and uphold the resistance.

Samidoun: Palestinian Prisoner Solidarity Network is an international network of organizers and activists working to build solidarity with Palestinian prisoners in their struggle for freedom, and for the liberation of Palestine from the river to the sea. Samidoun’s chapters and affiliates in Palestine, the United States, France, Canada, Germany, Belgium, the Netherlands, Sweden, Greece and elsewhere work together to build this movement. We invite you to contact us at samidoun@samidoun.net to share your actions, responses, or get involved with Samidoun.