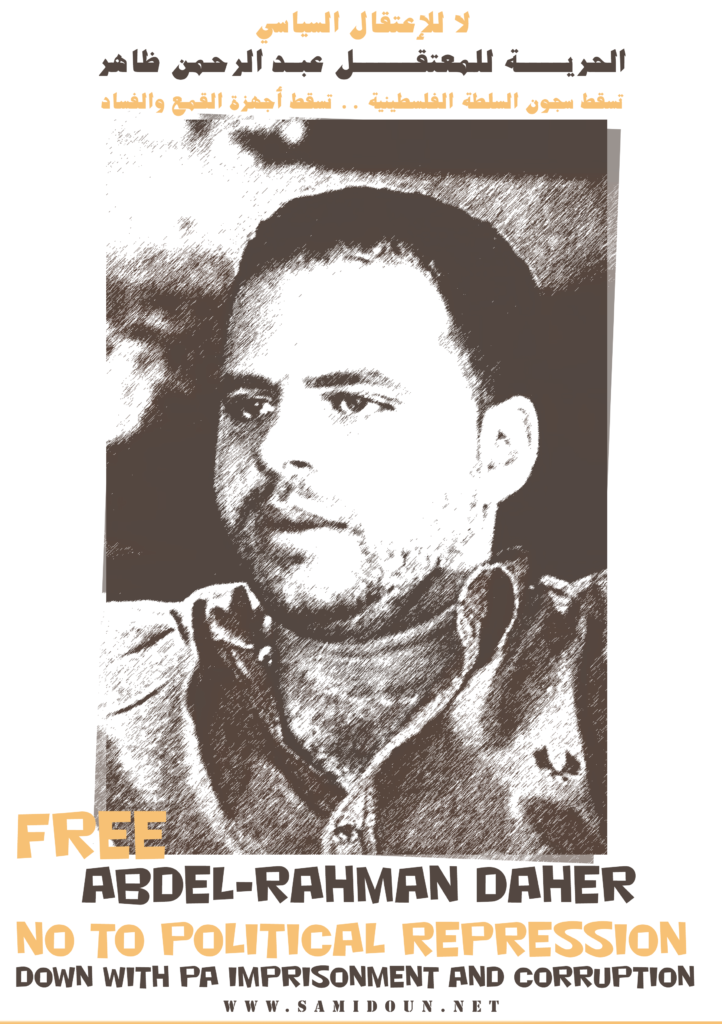 Samidoun Palestinian Prisoner Solidarity Network joins the call for the immediate release of Abdel-Rahman Daher by the Palestinian Authority security services, reiterating the demand for an end to political persecution and imprisonment by the PA and security coordination with the Israeli occupation colonial regime.

Abdel-Rahman Daher, 38, has been held since 19 August by the PA’s Preventive Security; he was seized as he left Al-Najah University in Nablus, where he works in the media department. His wife, Rasha Daher, and their two children, were unable to learn where he was being held or who had taken him until the day after he was seized. His family home was invaded by PA security forces, who confiscated notes and other material related to his journalistic and artistic work.

On 25 August, his detention was extended yet again and he was accused of “defaming the Palestinian Authority” for publishing material critical of the PA, including posts on Facebook criticizing Prime Minister Mohammed Shtayyeh as well as art he had produced while living outside Palestine.

Lawyers for Justice called for his immediate release, noting that his detention violates the PA’s own Basic Law, which guarantees freedom of opinion and expression, noting that even the allegations against Daher reflect “the natural exercise of opinion and expression….his arrest is arbitrary.” Daher has been active in the media field for many years, having produced multiple documentaries and TV programs. He worked as executive producer of TV programs for the Ruya satellite channel and Director of Artistic and Media Production for Wattan TV.

Mohannad Karajah, a lawyer with Lawyers for Justice, said that Daher was repeatedly interrogated about satirical TV programs produced years ago while living abroad that highlighted corruption and bureaucracy in the PA, as reported in Quds News.

When he was brought into the Nablus court on 25 August, he was only allowed to speak with his lawyer for a few minutes and was entirely blocked from speaking to his wife.

This is only the latest example of activists against corruption and defending Palestinian rights have been arrested by PA security services. On Wednesday, 26 August, anti-corruption activist Nizar Banat was released by the PA’s Dura court on bail of 2000 Jordanian Dinars ($2,800 USD), based on his criticism of Palestinian Authority corruption and security coordination with Israel. He has been frequently detained in by PA security forces in order to suppress this criticism.

The Popular Front for the Liberation of Palestine condemned the detention of Daher and Banat in a statement on 25 August, demanding their immediate release and an end to political repression targeting activists challenging corruption, noting that the matter “requires serious investigation into the corruption cases in question, not a cover-up by the Authority.”

It must be noted that political repression by the Palestinian Authority, including arrests and persecution of activists for posts on Facebook, demonstrations and media activities, come hand in hand with the continuing policy of PA security coordination and normalization with the Israeli occupation. Despite repeated verbal pledges to end security coordination, it continues on a daily basis – and the Palestinian people continue to face repression on all sides as a result.

Samidoun Palestinian Prisoner Solidarity Network urges the immediate release of Abdel-Rahman Daher and all political detainees in PA prison and an end to PA security coordination with Israel. Samidoun sent the following letter (below) to PA Prime Minister Mohammed Shtayyeh on 26 August, urging an end to the injustice. 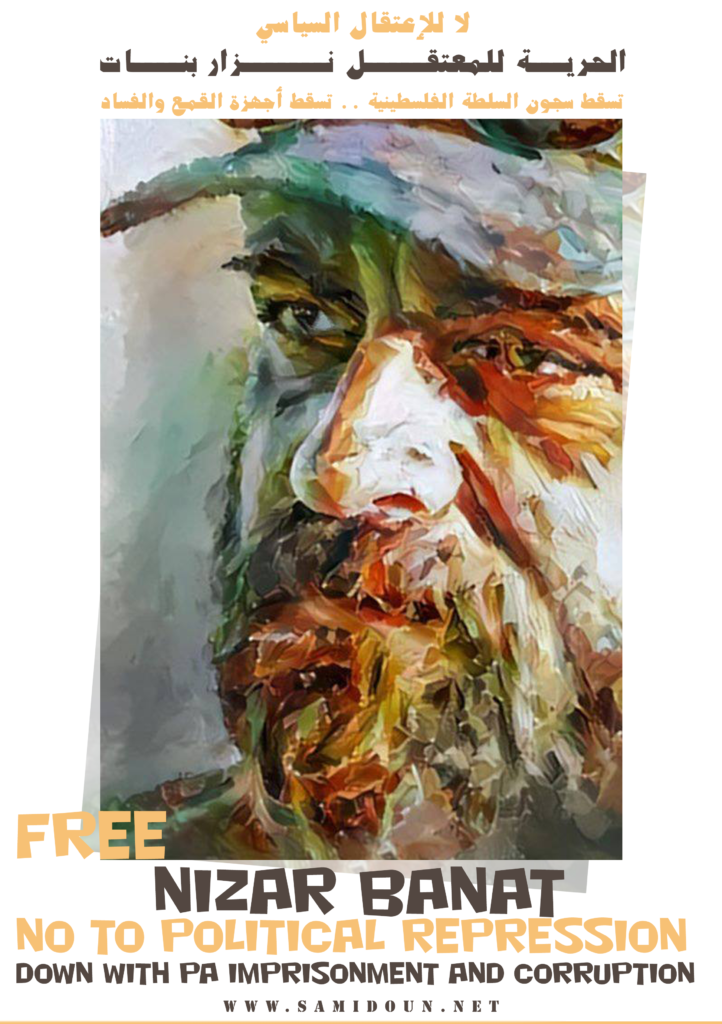