On Saturday, 3 October, the International League of Peoples’ Struggle launched its October 2020 Month of Solidarity with Palestine with an online program featuring Palestinian resistance icon Leila Khaled of the Popular Front for the Liberation of Palestine as the keynote speaker. The ILPS is a global alliance of mass organizations and people’s movements confronting imperialism, and Samidoun Palestinian Prisoner Solidarity Network is a member of the ILPS.

Watch the video of the event:

The event, watched by thousands live on Facebook and a full webinar room on Zoom, was particularly remarkable, coming as it did 10 days after the censorship of Leila Khaled and her fellow presenters, former political prisoners Sekou Odinga, Laura Whitehorn, Ronnie Kasrils and Rula Abu Duhou, as part of an Open Classroom organized by Dr. Rabab Abdulhadi and Dr. Tomomi Kinukawa  at San Francisco State University on 23 September. Zoom, YouTube and Facebook were all involved in the suppression of the Open Classroom. Following on that occasion, today’s ILPS event demonstrated that Zionist attack campaigns would not be successful in silencing Palestinian resistance or the voices of the Palestinian people, on any and all platforms, despite the complicity of big tech corporations acting in accordance with U.S.-Israeli priorities.

Leila Khaled was joined at this event by several other speakers, including Heba al-Labadi, the former political prisoner and hunger striker; Len Cooper, the President of ILPS and a labor leader from Australia; and Jamal Juma’ of the Stop the Wall campaign in Palestine.

The event kicks off a month of planned activities, including a Palestine 101 program, cultural events and several days of action, including a call for online and offline activities on 27 October under the slogan, “Colors of Resistance.”

This month-long campaign will deal with issues such as the recently announced Imperialist/Zionist annexation plan, the history of Israeli colonialism and apartheid, the rejection of agreements of humiliation and “normalization” between Zionism and some Arab countries, the global campaign to return to Palestine, support for the Intifada, the liberation of the Palestinian people, the unified capital of Palestine, the illegal Israeli occupation of Palestine and other key points. . 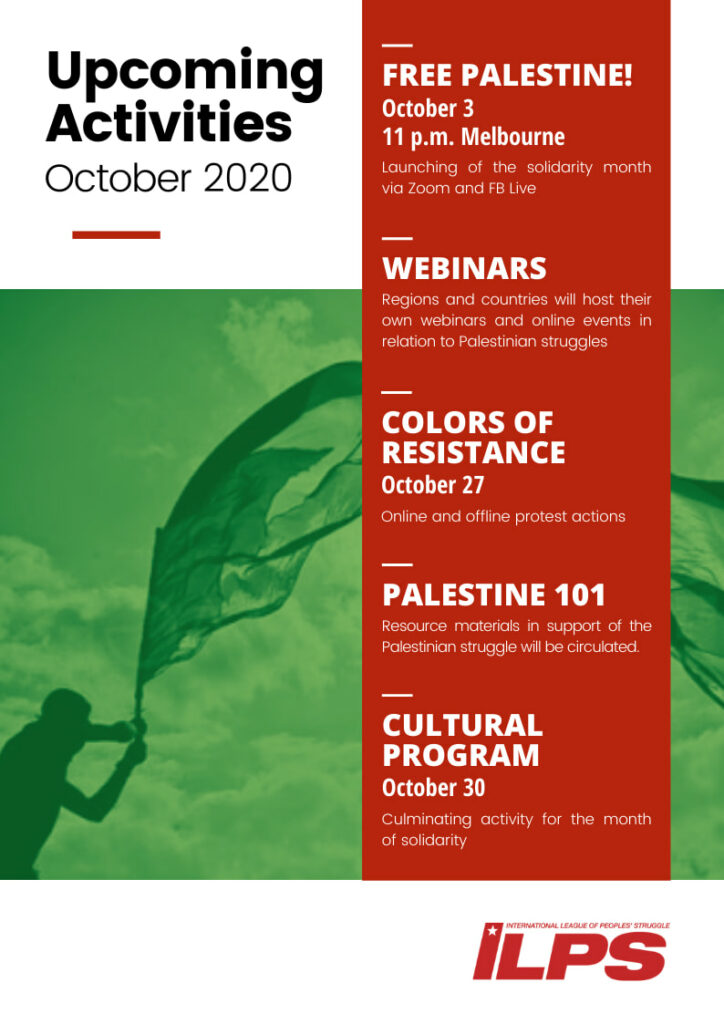