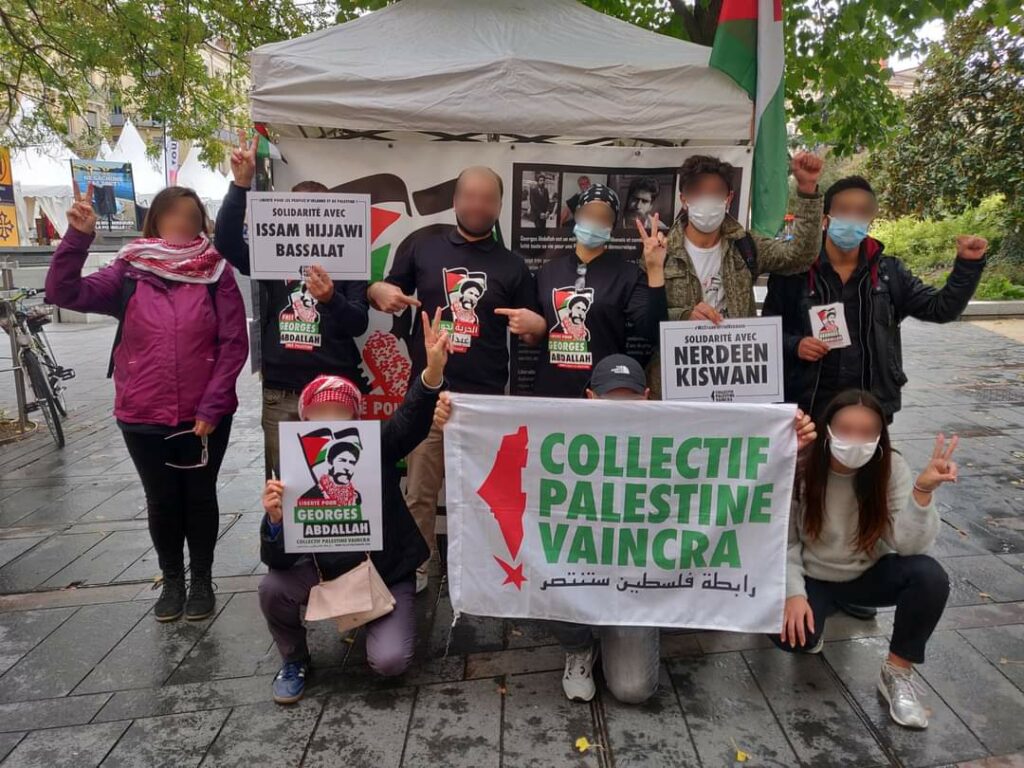 Over 20 organizations in Toulouse, France, have joined together to mobilize for the 24 October mass demonstration in Lannemezan, where Lebanese Arab Communist and struggler for Palestine, Georges Ibrahim Abdallah, has been imprisoned by the French state for nearly 36 years. The Toulouse organizations are joining with Collectif Palestine Vaincra to organize a bus to the demonstration to demand his freedom, which will depart at 11:30 am at the Basso Cambo metro station in Toulouse. 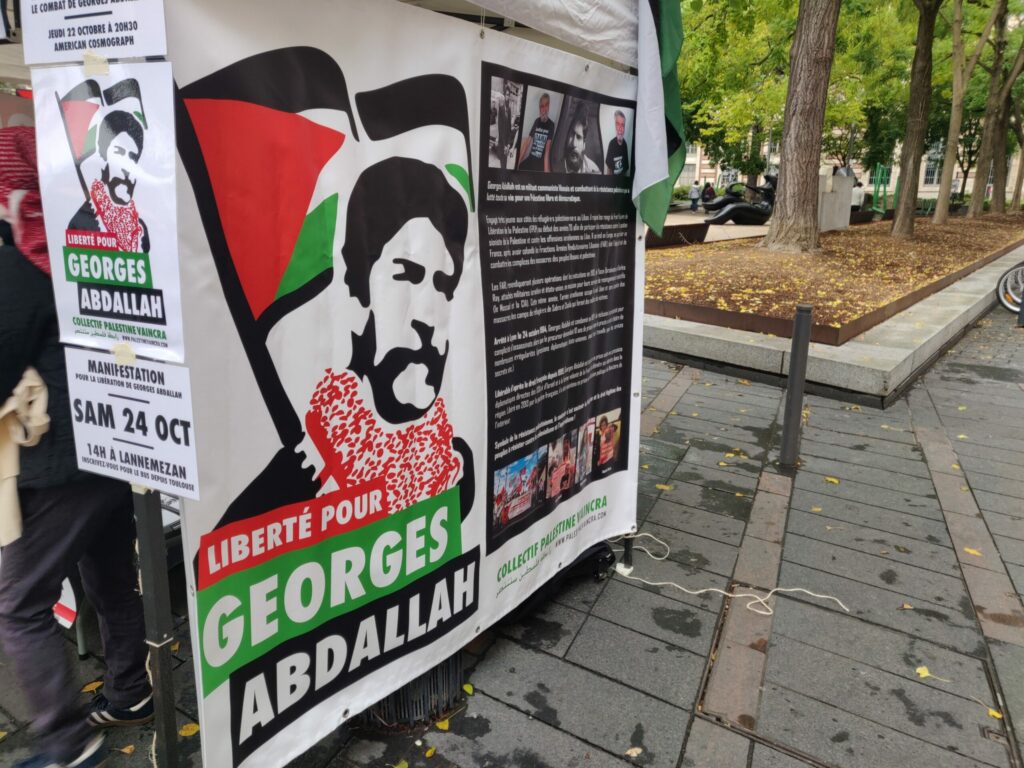 Tickets for the bus are free, but you must register to reserve your place at collectifpalestinevaincra@gmail.com. Every year, hundreds of people march from the train station to the prison gates in Lannemezan to call for the immediate liberation of Georges Abdallah and to send a clear message: “Georges Abdallah, tes camarades sont là !” (Georges Abdallah, your comrades are here!) 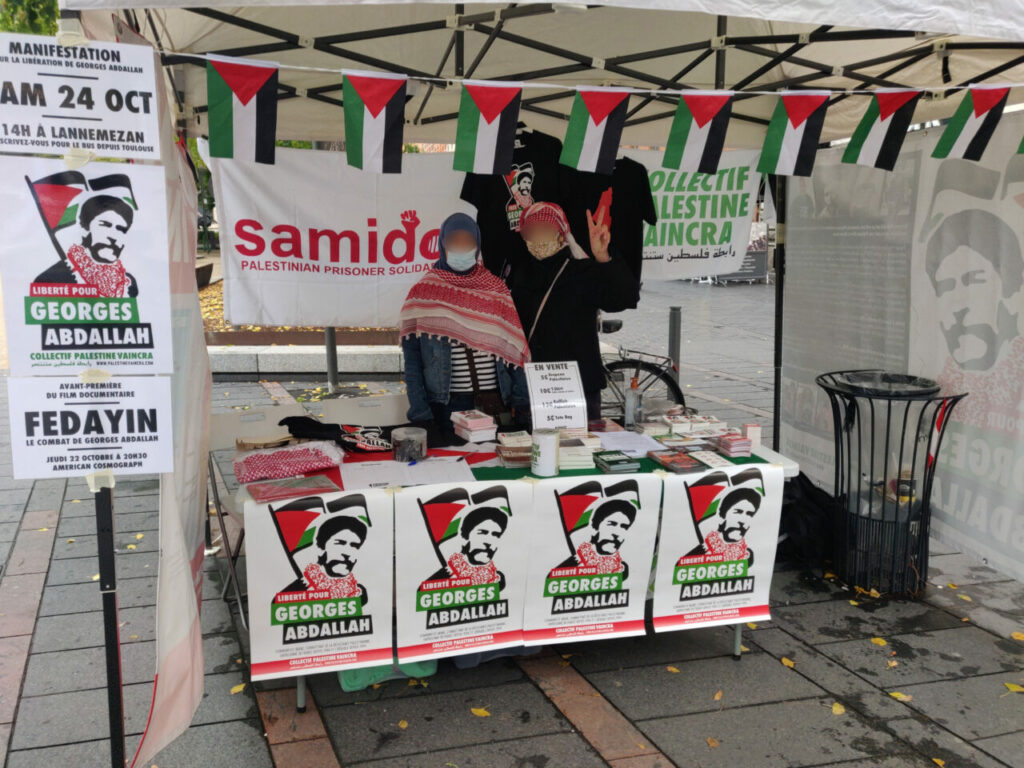 The statement of the groups (below) follows another successful Palestine stand organized by Collectif Palestine Vaincra, a member organization of the Samidoun Network, on Saturday, 26 September. The stand came as part of the preparation for the annual march and the month of action for Georges Abdallah, as well as the Days of Action to Return to Palestine and Confront Normalization. 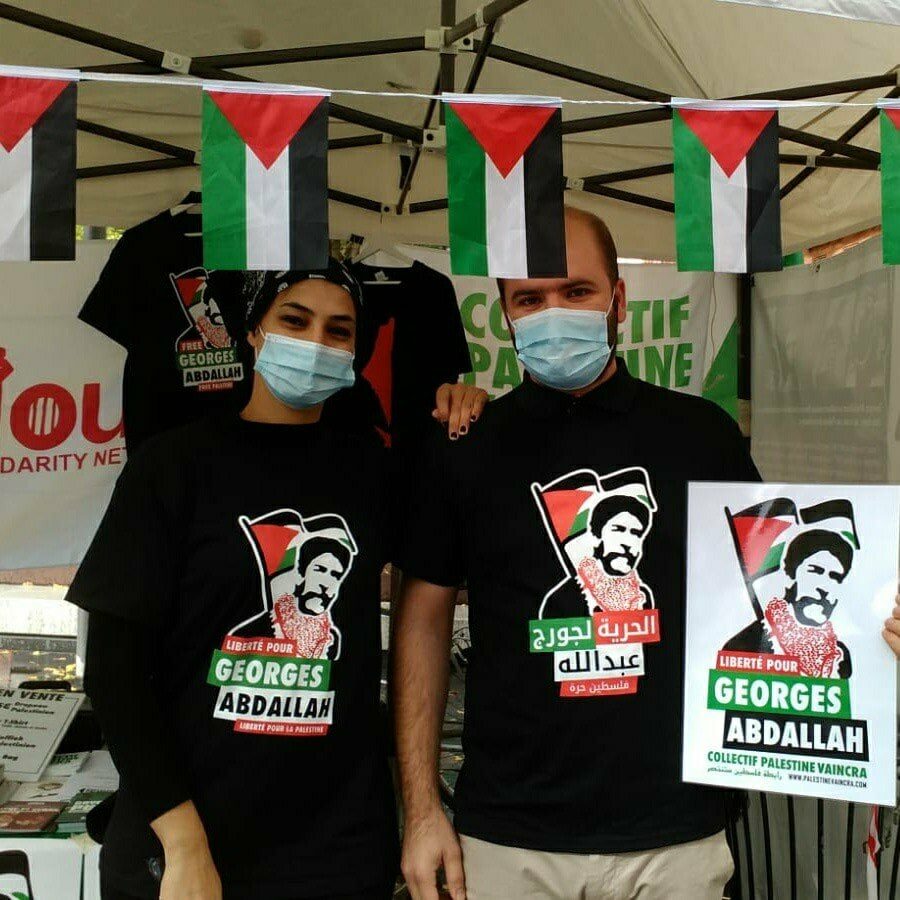 Around a dozen activists and supporters of the Collectif Palestine Vaincra distributed information and materials for over two hours, despite the rainy weather. Organizers with Attac Toulouse and the Friends of Palestine Against Imperialism and Zionism also joined in the activities of the stand. 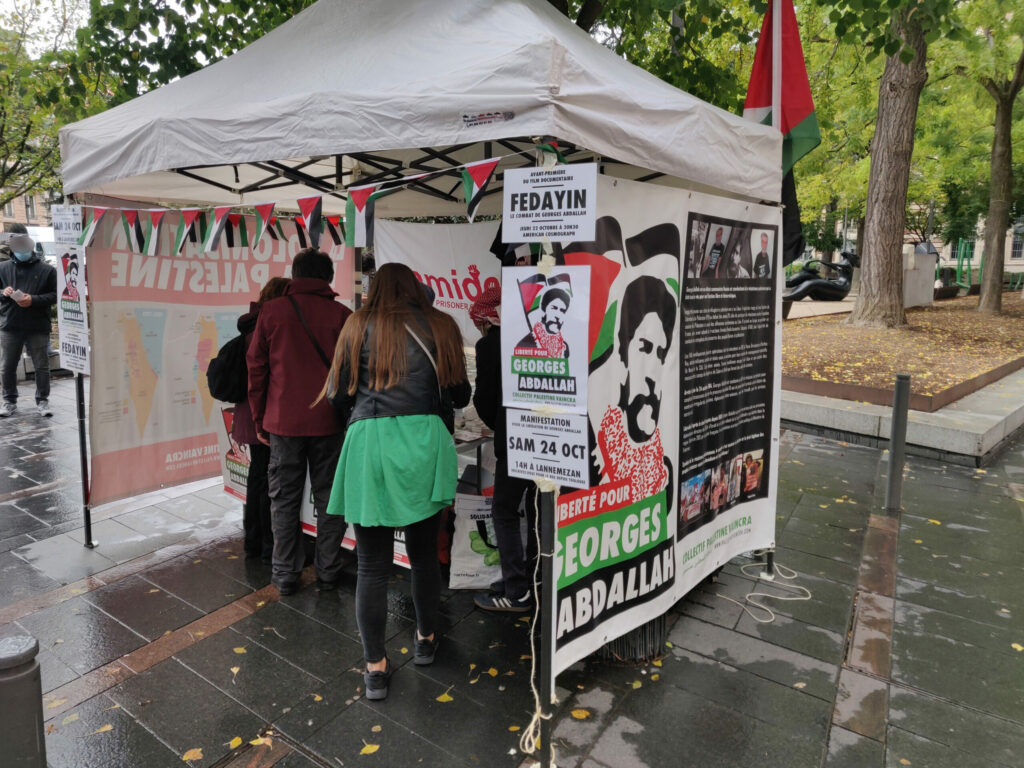 Thousands of flyers were distributed and activists spoke directly with hundreds of people about the continued imprisonment of one of the longest-held political prisoners in Europe, now nearing 36 years behind French bars. A number of people purchased the new t-shirts to support Georges Abdallah (available in French, English and Arabic, with international delivery), made small donations or signed up for the Toulouse bus to Lannemezan.

Many participants and passers-by took photos with signs to show their solidarity with Georges Abdallah and demand his freedom. The stand concluded with solidarity photos in support of Nerdeen Kiswani, the Palestinian activist and law student, chair of Within Our Lifetime – United For Palestine, who has faced a severe Zionist/far-right campaign attempting to attack her education; and Issam Hijjawi Bassalat, the Palestinian political prisoner jailed with his Irish comrades by the British state in the north of Ireland.

Below is the full statement of Toulouse organizations in support of Georges Abdallah:

On October 24, 2020, Georges Abdallah will have spent 36 years in French prisons. A Lebanese communist and struggler for Palestinian cause, this detention makes him one of the longest-held political prisoners in Europe. The story of Georges Abdallah is closely linked to that of the Palestinian resistance. Involved at a very young age alongside Palestinian refugees in Lebanon, he joined the ranks of the Popular Front for the Liberation of Palestine in the early 1970s in order to participate in the resistance to Israel’s incessant attacks and invasions in southern Lebanon as well as to confront colonization in Palestine. He later travelled to Europe, in particular to France, after having co-founded the Lebanese Revolutionary Armed Fractions (FARL), whose objective was to combat those who were complicit in the massacres of the Lebanese and Palestinian peoples. The FARL claimed responsibility for several operations, including the 1982 assassinations of Yacov Barsimentov and Charles Ray, Israeli and US military attachés, on mission for their respective intelligence services (the Mossad and the CIA). That same year, the Israeli army occupied southern Lebanon and was involved in the massacres in the refugee camps of Sabra and Shatila. Arrested in Lyon on October 24, 1984, Georges Abdallah was sentenced in 1987 to life imprisonment for complicity in murder, even while the prosecutor asked for 10 years and the trial was the scene of numerous irregularities (US diplomatic pressure, George’s lawyer secretly on the payroll of French intelligence…).

Eligible for release since 1999, Georges Abdallah has made several unsuccessful attempts to gain his freedom. The most recent (2013), was accepted by the sentencing court, conditional on his deportation to Lebanon. However, it was then blocked by Manuel Valls, Minister of the Interior at the time. For almost 36 years, he has remained condemned for refusing to deny his principles and for continuing to defend them against colonization, racism, fascism and in support of numerous mobilizations for equality and human emancipation.

In Toulouse, we call for participation in a month of mobilization for his release as well as in the national demonstration Saturday, October 24, 2020 from 2 p.m. from the Lannemezan train station to the prison of Lannemezan (65) where he is being held.