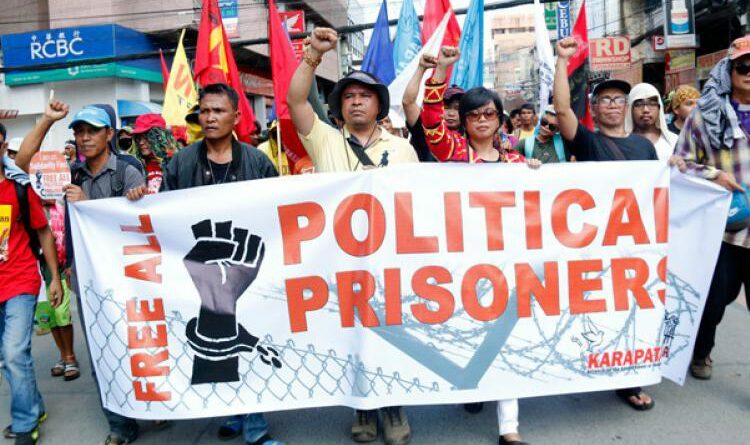 Samidoun Palestinian Prisoner Solidarity Network is a member of the International League of Peoples’ Struggle, a global mass anti-imperialist alliance. The following statement was issued today, 3 December, as part of the International Day of Solidarity with Political Prisoners and Prisoners of War by the ILPS Commission 3. Samidoun is also participating with ILPS in #SetThemFree, an online event in support of political prisoners around the world:

On December 3, 2020, the International Day of Solidarity with Political Prisoners and Prisoners of War, the International League of Peoples Struggles (ILPS) Commission 3 e salutes all political prisoners in Colombia, Guatemala, Indonesia, Iran, Kurdistan, Palestine, Philippines, Peru, Turkey, United States and elsewhere in the world who ardently defend the rights of peoples against imperialism and fascism. We demand their freedom!

Political prisoners are activists, freedom fighters, human rights defenders, and people who have been deprived of their liberty and remain in detention as a result of their political beliefs, aspirations and struggles.

Dr. Abimael Guzman Reinoso, 86 years old, is a Peruvian revolutionary who isincarcerated since 1992. Guzman’s lawyers claim that his rights are violated in jail. They demand that Guzman be treated as a political prisoner, as they assert that “any prisoner who has engaged in a political struggle, in a revolutionary struggle, in a civil war, is still must be treated in ways that follow international law no matter who they are. ” Guzman is currently held in absolute and perpetual isolation despite his fragile state of health and without medical attention at the Torture Center of the Military Prison of the El Callao Navy Base in Peru. We at ILPS Commission 3 demand respect for his life, his physical integrity and his health as stated by Peruvian and international laws.

Georges Ibrahim Abdullah, 69 years old, activist and resistance hero of the Palestinian resistance against Zionism, continues to be imprisoned in Lannemezan, France since 1984, making him the longest held political prisoner in the world.

Abdullah Ocalan, 71 years old, Kurdish nationalist political theoretician and one of the founding members of the Kurdistan Workers’ Party is imprisoned since 1999. He is currently held in prison in Imrali, a small Turkish prison island in the south of the Sea of Marmara.

Mumia Abu-Jamal, 66 years old, political activist and journalist, imprisoned since 1982, is currently detained at the State Correctional Institution – Mahanoy in Schuylkill County, Pennsylvania, USA. He continued writing while in prison about the criminal justice system in the United States. He sued the prison system for refusing to treat him of his ailment, Hepatitis C, asserting that this violated his 8th Amendment protection from cruel and inhumane treatment as a prisoner and he won a court order that required the prison system to treat his disease.

Rey Claro Casambre, 68, Filipino social activist, former university teacher, physicist, and executive director of the Philippine Peace Center when  arrested on fabricated criminal charges two years ago.  As a long-time peace mobilizer and expert sought by academicians, churches, civil society institutions and cause-oriented advocates, he also served as one of the peace consultants of the National Democratic Front in peace negotiations with the Philippine government. He is incarcerated along with over 40 other political prisoners at Metro Manila District Jail 4 of the Bureau of Jail Management and Penology in Camp Bagong Diwa, Taguig City.

We at ILPS Commission 3 demand the speedy release of these political prisoners!

Thousands more political prisoners are languishing in various jails in the different countries of the world, all for waging their fight for their right to self-determination and people’s rights.

Palestinian political prisoners estimated to be around 5,000 including 180 children are held in various Israeli occupation prisons.

In Guatemala the political prisoner Bernardo Caal, leader of the community Maya Qeqchi, supports a struggle against the company Retrieval, properties of Florentino Perez, president of the team of soccer Real Madrid of Spain, who as a whole with the hydroelectric ones Is reborn and  Oxec S.A, realized ravages in the destruction of the river Cahobon, for its own benefit. The damage caused in the destruction of the river by these companies, could be a visible today with the step of the thunderstorms ETA AND IOTA causing death in the population. The partner Bernando takes 1,026 days of prison torture for the alone fact of denouncing and of defending this outrage against the nature.

In the Philippines, there are currently 652 political prisoners languishing in prisons across the country, more than 400 of whom were detained under the fascist Duterte regime.

Thousands of political prisoners in Turkey were arrested and imprisoned under the brutal Erdogan government.

In the light of the continuing onslaught of the COVID 19 pandemic, we echo the call of UN rights chief, Michelle Bachelet  to governments to “reduce overcrowding in prisons to prevent catastrophic rates of COVID 19 infection” citing specific-at risk groups such as pregnant women, people with disabilities, elderly prisoners, and to those with underlying health conditions, minor and low risk offenders, people nearing the end of their sentences, and  “every person detained without sufficient legal basis, including political prisoners and those detained for critical, dissenting views.

We denounce governments’ inaction to release political prisoners, in line with the UN call. This is the case for the Philippines, Indonesia, Iran, Turkey, Afghanistan and even the United States.

For repressive governments and imperialist nations, political prisoners are enemies, but for the peoples of the world they are an inspiration. These comrades who express the real situation of their country and defend their people against the imperialist wars of aggression are among those who also promote the resistance of the peoples to change a world system that knows only war and profit. Their fight and ideals will raze the prison walls. Indeed, the imperialists and the repressive governments may have put behind bars their  bodies, but never their minds and their will to fight.

In waves of vehement voices, we continue to call for the release of all political prisoners! We stand with the peoples of the Colombia, Guatemala, Indonesia, Iran, Kurdistan, Palestine, Philippines, Peru, Turkey, United States and other countries in their fight for freedom. As thousands of activists and freedom fighters are imprisoned, tortured, killed or disappeared around the world, we continue to march to advance and intensify resistance against state repression, within our own borders, and against the predatory wars of US imperialism.

ILPS Commission 3 stands in solidarity with all political prisoners and unequivocally demands their immediate and unconditional release!