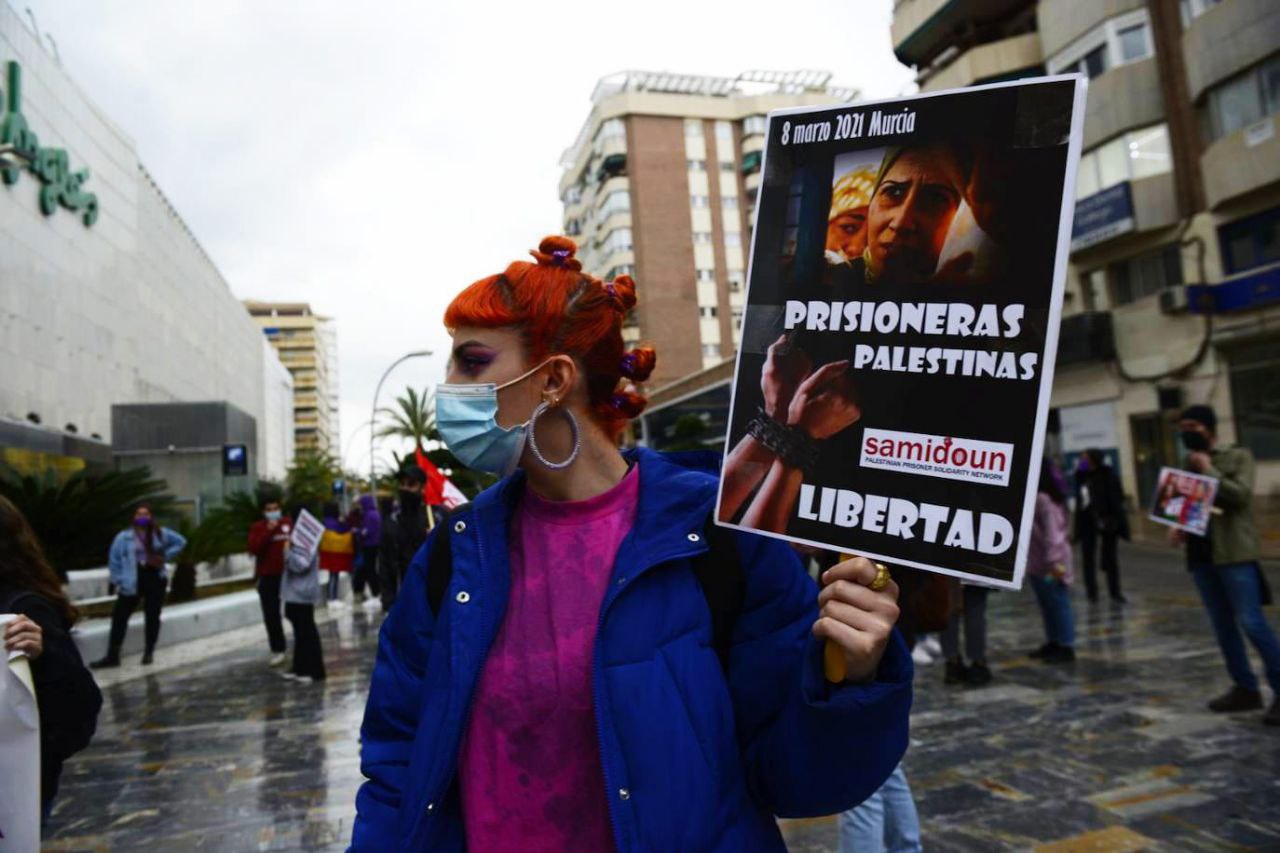 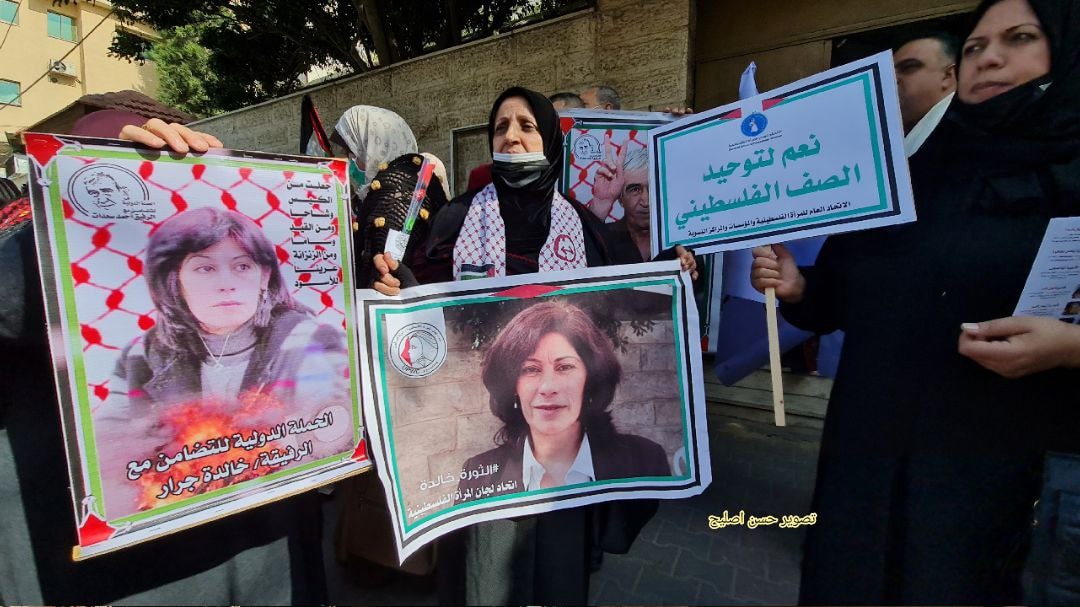 Dozens of Palestinians gathered in Gaza on 8 March carrying signs and banners calling for the release of Palestinian women prisoners outside the International Committee of the Red Cross, many focusing on the case of Khalida Jarrar, Palestinian parliamentarian, feminist and advocate for Palestinian political prisoners. She was sentenced to two years in Israeli prison for her public political activity on 1 March 2021.

In Toulouse, France, the Collectif Palestine Vaincra joined a march of thousands organized by Tous en Grève 31 and a coalition of trade union, political and social organizations. They carried signs and posters highlighting the liberation struggle of Palestinian women, including signs calling for freedom for imprisoned Palestinian women students and Khitam Saafin, the president of the Union of Palestinian Women’s Committees, jailed without charge or trial in administrative detention. 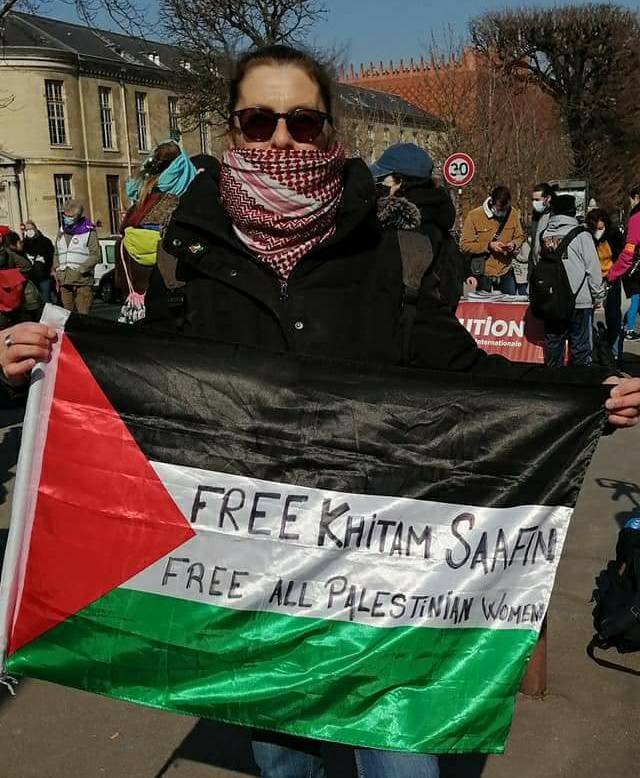 In Paris, France, activists from CAPJPO-EuroPalestine joined the demonstration for International Women’s Day, where they carried Palestinian flags and banners urging freedom for Khitam Saafin, Khalida Jarrar, and all Palestinian women prisoners. 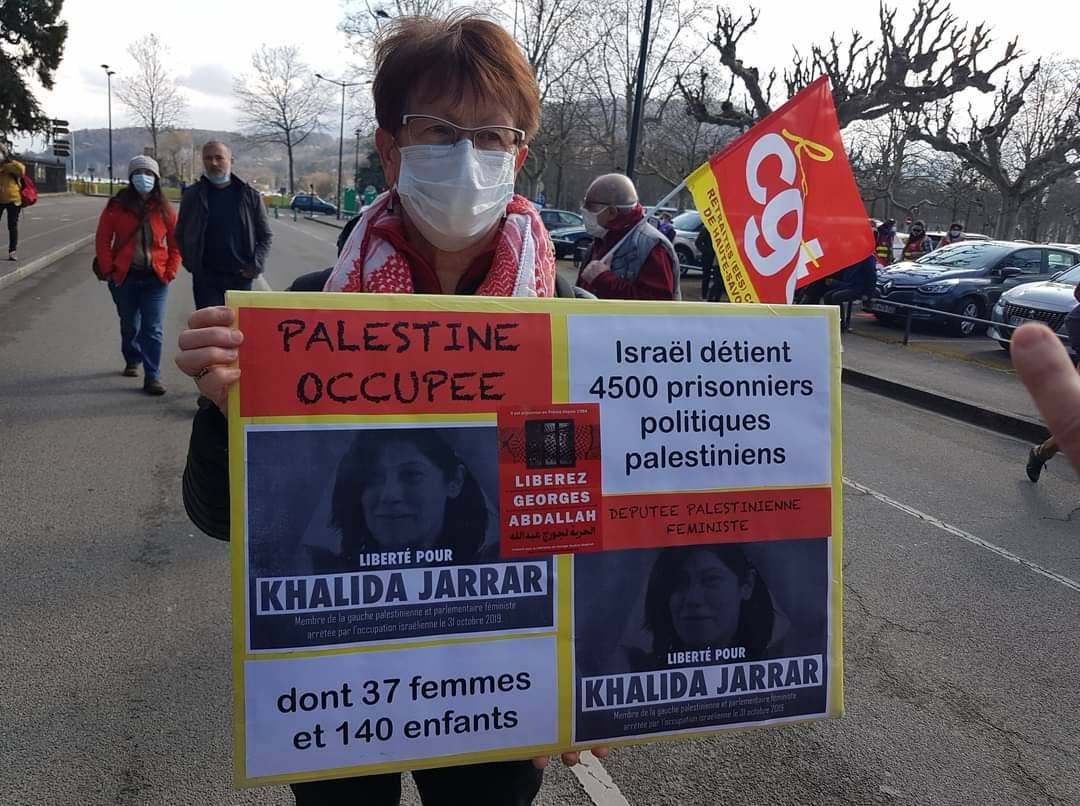 In Annecy, France, activists from the Association France-Palestine Solidarite joined the 8 March demonstration carrying signs highlighting the case of Khalida Jarrar and calling for freedom for all Palestinian prisoners.

In Charleroi, Belgium, the Plate-forme Charleroi-Palestine and Vie Féminine joined together to highlight Palestinian women prisoners on 8 March. They organized a photo shoot to show solidarity with Palestinian women, especially Khitam Saafin and Khalida Jarrar. 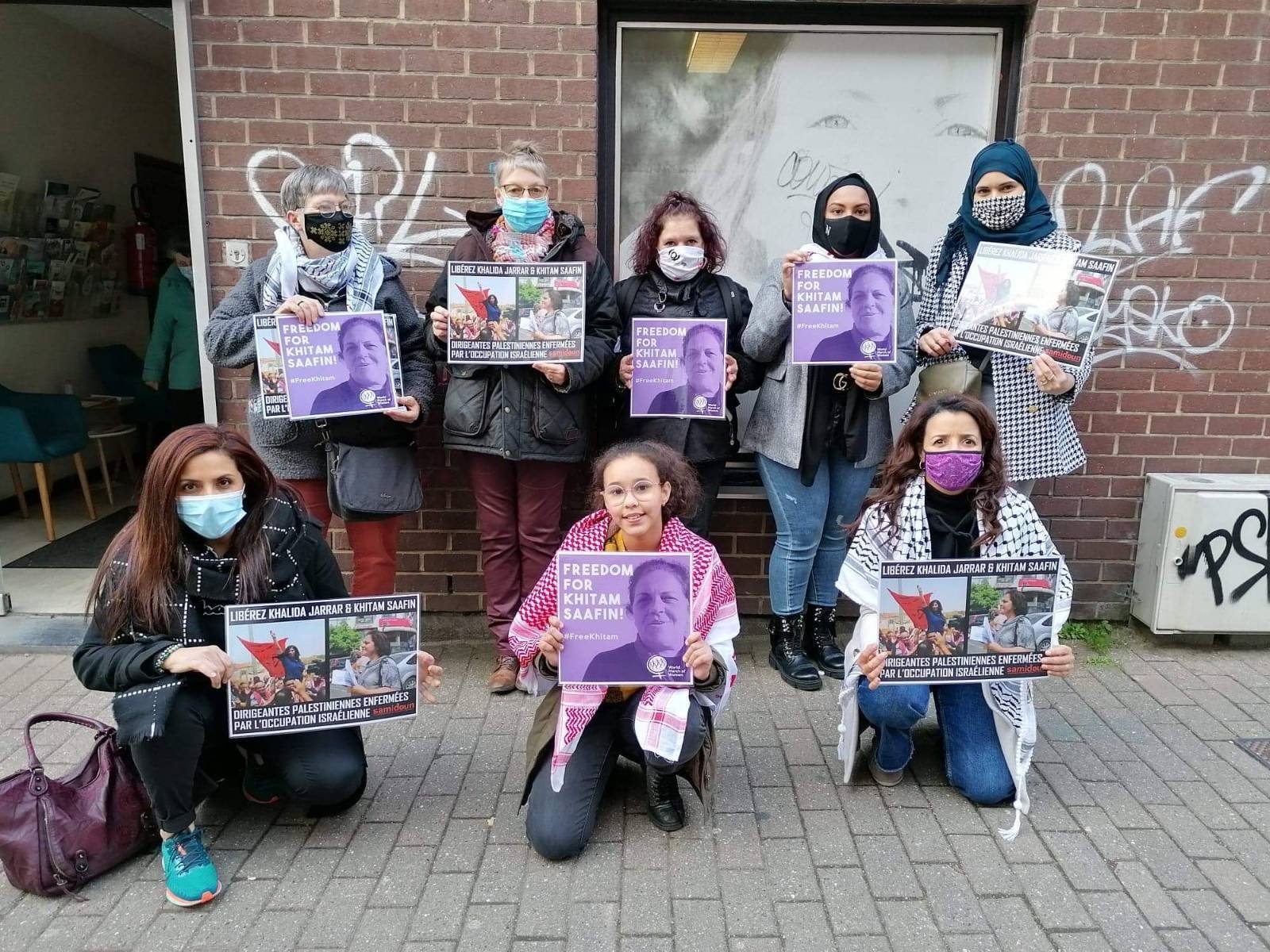 Also in Belgium, Vroni Lemaire of the FGTB-Brussels Women’s Commission, the women’s organization of a large trade union syndicate, appealed on Facebook: ” On November 2, our comrade Khitam Saafin was arrested in administrative detention by the Israeli occupation forces. She was due to be released this week, but they extended her detention for another four months. Khitam is the director of the Union of Palestinian Women’s Committees (UPWC) and a member of the World March of Women in Palestine. Administrative detention is an arbitrary procedure that Israel uses to incarcerate Palestinians without any specific charge or trial. Today, 37 Palestinian women are detained in Damon prison, including 3 administrative detainees without charge or trial. We call on all our sisters of the World March of Women to denounce this arbitrary detention and to show our solidarity on March 4 by sending messages and photos with #FreeKhitam signs, by tagging the #MarcheMondialedesFemmes #worldmarchofwomen on social networks. We will march until all women are free!”

In Naples, Italy, the Centro Cultural Handala Ali organized an International Working women’s Day action where they held banners in support of Palestinian women prisoners, flew kites bearing the images of Palestinian women heroes and detainees, including Khalida Jarrar and Leila Khaled, and raised the Palestinian flag. The display by the sea attracted wide attention and support from people passing by.

In Stockholm, Sweden, members of Samidoun Stockholm dropped a banner reading “Class Struggle – Women’s Struggle” and delivered a statement in support of health care workers’ struggle for 8 March: “Last week, it was noted that in the Stockholm Region there has been a surplus of close to six billion kronor, while Södersjukhusetets Kvinnoklinik has been commissioned to implement extensive cuts, including by not bedding properly, reducing the range of selected drugs and saving money on food, drink and coffee.

This situation is not isolated to Swedish conditions. In occupied Palestine, the Arab population is systematically denied access to health care, medicines and vaccines. At the same time as Israel is at the top of the world of vaccination, it refuses to vaccinate the Palestinians in the occupied territories.

In occupied Palestine, feminist organizing can be a crime. Palestinian feminist Khitam Saafin has been detained without evidence for several months, and two weeks ago her detention was extended for another four months . Exactly one week ago, feminist parliamentarian Khalida Jarrar was sentenced to two years in prison for her political activism. Israeli occupation prisons have been criticized year after year by the UN and human rights activists for their lack of access to food and medicine, as well as for systematic torture of political prisoners.

Our position is the same in Sweden as in Palestine: the nurses and the feminist prisoners show the way forward. The women’s struggle, like the class struggle, is at its height as a result of a pandemic and economic crisis, and it is only through unity that we can win our freedom. We say:

Stop applauding and raise nurses’ salaries!
Freedom for Khitam Saafin, Khalida Jarrar and all other Palestinian female prisoners!
All support for the #TaHemmetTacka campaign!”

In Madrid, Samidoun España members participated on 6 March in a feminist demonstration to close detention centers for migrants, emphasizing the importance of internationalist, anti-imperialist and class solidarity. They carried signs calling for freedom for imprisoned Palestinian women, including Khalida Jarrar and Khitam Saafin, and highlighted the case of Georges Ibrahim Abdallah, the longest-held political prisoner in Europe, imprisoned in France for over 36 years.

In Murcia, Samidoun España joined in the 8 March demonstration, highlighting the struggle of Palestinian women prisoners, especially Khitam Saafin and Khalida Jarrar. They marched together with Sahrawi women in support of justice in Palestine and Western Sahara, and issued a call: “The struggle of women is and has been important to keep the resistance alive in every place in the world and Palestine is no exception, The Palestinian woman is and has long been a figure of resistance and tenacity, of rebellion and love, of strength and freedom, of struggle and, without hesitation, of life, this is why from any area we recognize, remember and support them in demanding justice until #Palestine is free, we are a creative force, we are sisterhood, we are sisters.”

Samidoun Deutschland joined with Free Palestine FFM for several 8 March events, in Darmstadt, Frankfurt, and elsewhere in Hessen, Germany. They declared: “We say: None of us is free until we are all free! Freedom for all political prisoners, freedom for Palestine! Consistent solidarity must be internationalist and combative! The emancipation of all sexes can only be possible if there is also emancipation from imperialism, occupation, apartheid regimes and settler colonialism – from the river to the sea!”

Samidoun’s international coordinator Charlotte Kates participated in the 8 March event organized by Gabriela BC in Vancouver. The online event highlighted the struggles of women locally and around the world in confronting imperialism and capitalism, and the Samidoun solidarity statement focused on Palestinian women prisoners, including the student prisoners, Khalida Jarrar, Khitam Saafin and Bushra al-Tawil. The event highlighted the struggle of Filipina women, especially political prisoners like Reina Mae Nasino and Amanda Echanis. “There is power in the struggle for liberation for workers, women and all oppressed peoples living in the Philippines. Together, we envision a world where we exist, live and thrive in equality and peace!” Gabriela activists affirmed. 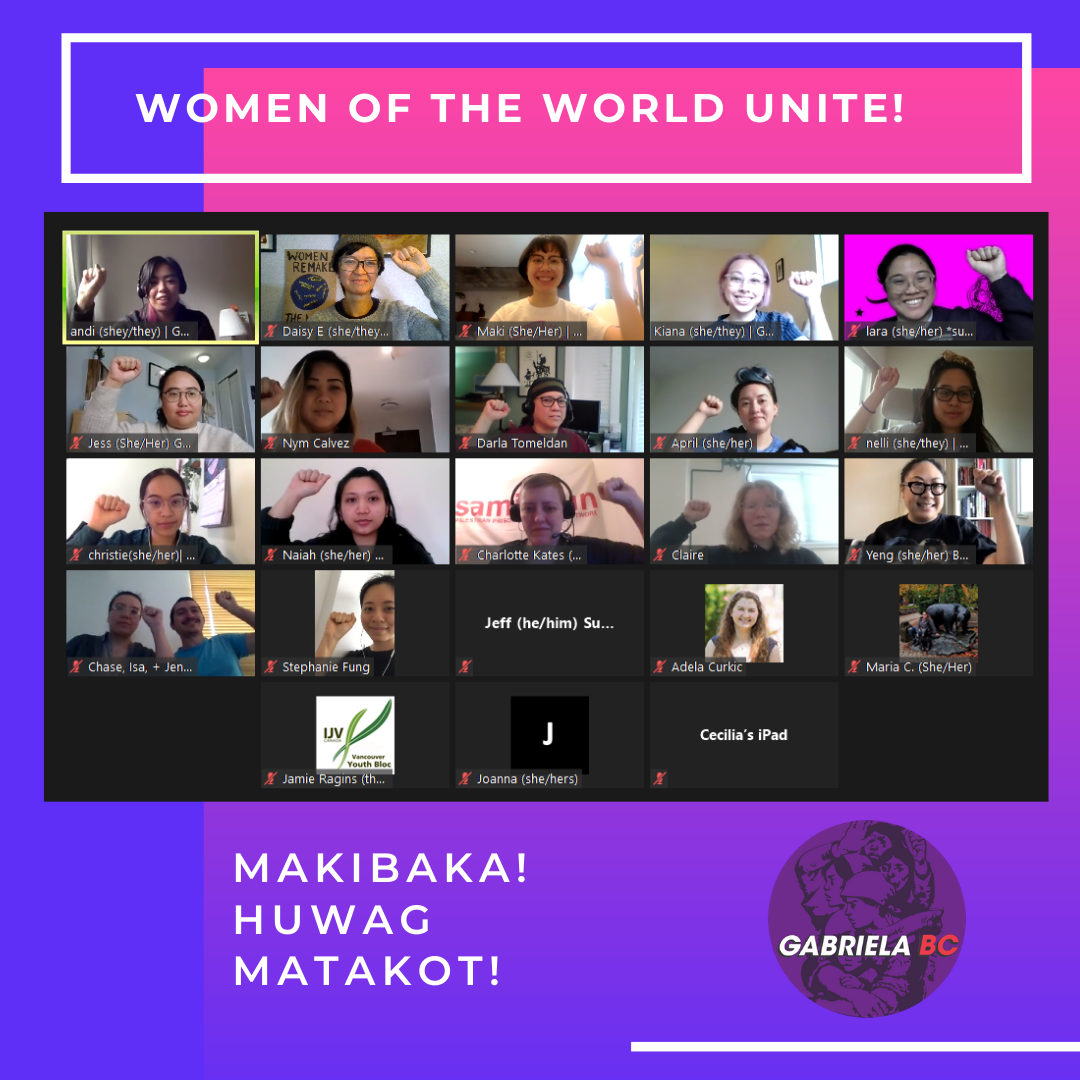 Samidoun in occupied Palestine issued three posters highlighting Palestinian women’s struggle historically and at present, including their role in the Palestinian revolution and the struggle of the prisoners and detaiinees for liberation.

Hadeel Shatara, coordinator of Samidoun in occupied Palestine, spoke at an event organized by Attac Morocco, focusing on women’s struggle amid the crisis of capitalism and patriarchy, alongside women throughout the Arab region, on 7 March:

Despite all attempts of the Zionist regime to isolate them from the global movement for the liberation of women and humanity through imprisonment and repression, Palestinian women continue to organize and struggle from behind bars, in the streets and fields of occupied Palestine, and everywhere in exile in diaspora, seeking return and liberation. On International Women’s Day 2021, Samidoun Palestinian Prisoner Solidarity Network salutes the movement of Palestinian women and their leadership in the ongoing and daily struggle for national and social liberation.

We urge women’s organizations, student organizations and people of conscience everywhere to raise their voices and act in solidarity with Palestinian women, and Palestinian women prisoners, targeted by the Israeli occupation – including by building the movement for the boycott of Israel, its institutions and complicit corporations like HP, Puma, Teva Pharmaceuticals and G4S. The Israeli occupation wants to continue its colonization of Palestine unchecked by isolating and detaining the leaders of the Palestinian people’s movement. Now is the time to act and urge their immediate release and the liberation of all Palestinian prisoners, and of Palestine, from the river to the sea.