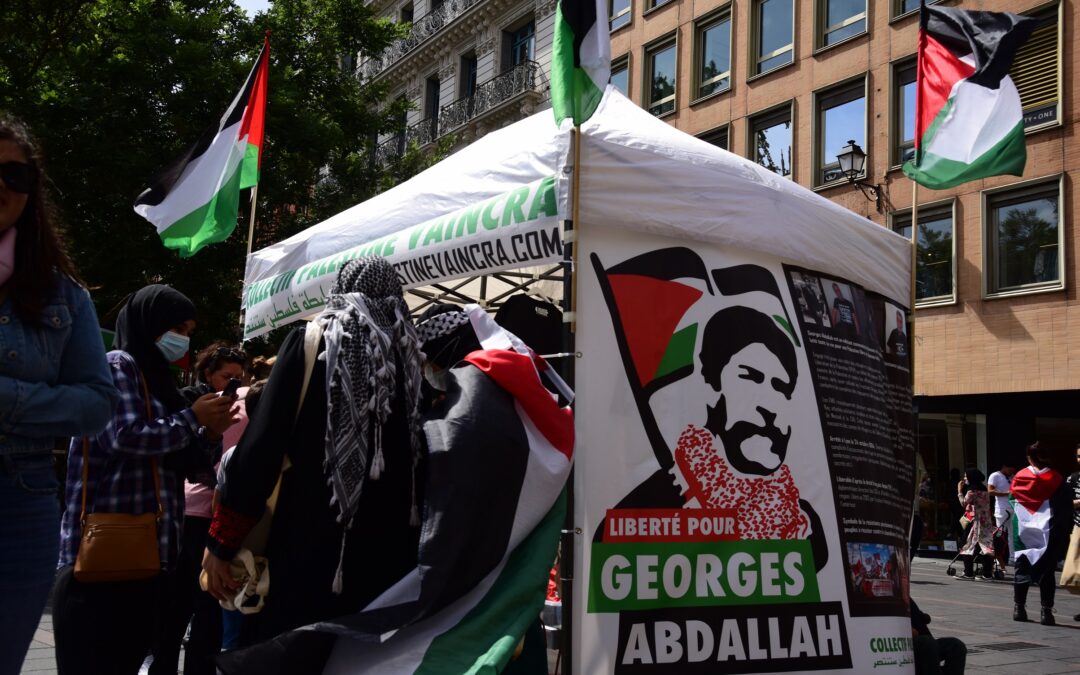 Georges Abdallah, the Lebanese Communist revolutionary and struggler for Palestine who has been imprisoned in France since 1984, delivered the following statement for the International Week of Action for the Liberation of Georges Abdallah, marked at demonstrations and events around the world between 12 and 19 June. Georges Abdallah is now the longest-held political prisoner in Europe.

His story is chronicled in the new film, Fedayin: The Struggle of Georges Abdallah, screened in cities across France, Switzerland, Italy and Tunisia as part of the Week of Action.

Fedayin is available in French, English, Arabic, Spanish, Italian, and German (with subtitles). The film is available for screening — to organize a screening, please contact Vacarmes Films at vacarmesfilms@gmail.com. Please also feel free to reach out to Samidoun at samidoun@samidoun.net if you are interested in organizing a screening of Fedayin.

Georges Abdallah’s statement was originally issued in French; the English translation is below:

Less than one month ago, we commemorated the Nakba in a very special atmosphere. Reactionaries of all stripes swore by the “deal of the century,” trumpeting from the rooftops the so-called beneficial effects on regional peace provided by normalization between the Zionist entity and reactionary Arab regimes. They repeatedly proclaimed the end of the Palestinian cause. 28 years after the Oslo accords, the Zionist entity came to believe that it had truly subjugated the Palestinian people forever. The Zionist leadership has always believed that, in time, “the old will die and the young will forget”…. This is how these officials made the mistake of believing that they could take advantage of this general confusion and end it once and for all, with their attack on Al-Quds.

73 years after the Nakba, the attack on Al-Quds led necessarily to a general explosion. The Palestinian popular masses do not care about the confusion and indeterminacy of their official leadership in such a situation. And so it is that from Sheikh Jarrah to Gaza to all the towns and cities of the West Bank and occupied Palestine ’48, Palestinians of all ages have rediscovered themselves, an entire, unified people in full mobilization. Palestine, the land and people, are united more than ever. The tremors of this volcano are far from limited to Palestine alone; the Palestinian masses in the refugee camps in the Arab countries surrounding Palestine stand in unison with the Arab masses, together with Palestine, the embodiment of dignity and the source of hope. The tremors of this popular volcano have shaken and pulverized not only the “deal of the century,” but above all, the Oslo accords. It was only to stem this popular uprising and to attempt to prevent its regional repercussions that the imperialist powers and reactionaries of the region hastened, after 11 days of criminal bombardment, to establish a ceasefire…

Naturally, this popular intifada of a particular type will not stop there. This is the time to shift the framework and not allow the Oslo leadership to return as if nothing has happened. It is clear, comrades, that since this ceasefire, not a single day has passed in the West Bank without new martyrs, young and old. Let us examine the situation in Beita, in the south near Nablus, or in Jenin in the north, not to mention all the ongoing provocations, attacks and repression in Al Quds, in occupied Palestine ’48 and the ongoing raids and bombing attacks on Gaza.

Comrades and friends, the Resistance in all its forms always benefits the people. It is only the Resistance that puts the Palestinian cause back in its rightful place on the regional and world stage. Fateh strugglers, like strugglers from all organizations in the West Bank, chanted the names of the resistance fighters in Gaza, committing themselves to defend the ongoing popular intifada, to end all forms of capitulation and treachery, and to get rid of the occupier once and for all. Certainly, it was the Resistance that enabled the Palestinian popular masses to transform the 73rd commemoration of the Nakba into a Nakba for the Zionist regime. Despite the enormous cost in blood and destruction, the joy of the final victory will be even greater, as a commander of the Abu Ali Mustafa Brigades affirmed…

Comrades and friends, from behind the abominable prison walls, Ahmad Sa’adat and the thousands of comrades imprisoned in Zionist jails, send their revolutionary greetings and draw your attention to what is happening in occupied Palestine ’48. Certainly, they can rely on you more than ever not to ignore or underestimate the scope of the violent racist gang attacks organized by the fascist and supremacist groups in Ramleh, Lydda, Haifa and Umm al-Fahm, openly supported by the Israeli police .

That said, comrades, the Palestinian popular masses engaged in this ongoing intifada can rely, and must be able to rely, upon your mobilization confronting all of the shameless propaganda of the imperialist bourgeoisie, in your countries in particular….The conditions of detention in Zionist jails worsen daily. And as you know, comrades, international solidarity is an essential weapon of struggle. Quite naturally, the Palestinian popular masses and their revolutionary vanguards can always rely on your mobilization and your active solidarity.

May a thousand solidarity initiatives blossom in support of Palestine and its promising Resistance!

May a thousand solidarity initiatives flourish in support of Palestinian flowers and lion cubs (Palestinian girls and boys)!

Solidarity, all solidarity with resistance fighters in Zionist jails and in all isolation cells elsewhere around the world!

Solidarity, all solidarity with young proletarians from working-class neighborhoods!

Honor to the Martyrs and to the struggling popular masses!

Down with imperialism and its Zionist and Arab reactionary watchdogs!

Capitalism is nothing more than barbarism, salutes to all those who oppose it in the diversity of their expressions!

Together, Comrades, and it is only together that we will win!

To all of you, Comrades and Friends, my revolutionary greetings.