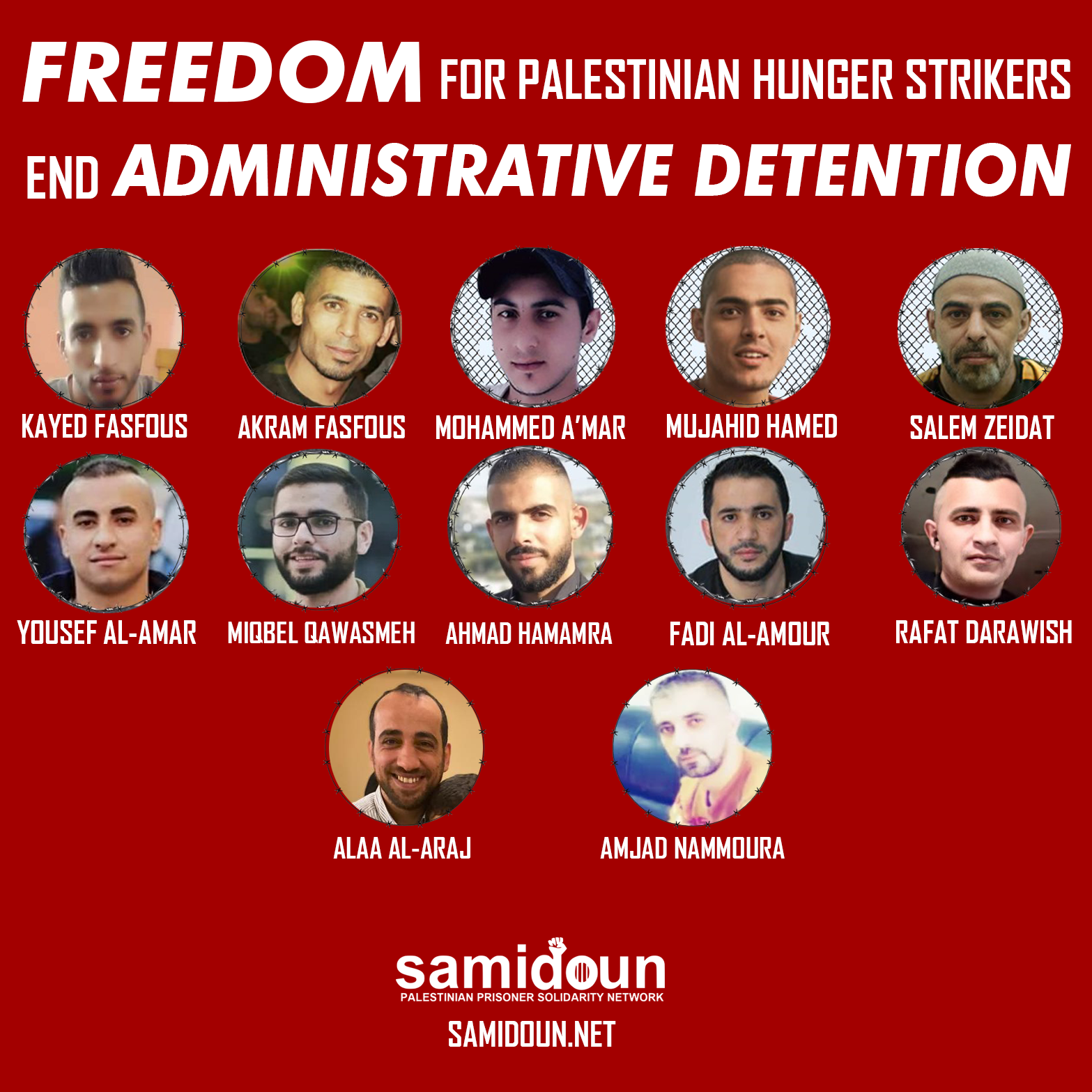 Twelve Palestinian political prisoners are continuing their hunger strikes to bring an end to administrative detention, Israeli imprisonment without charge or trial. Salem Zeidat, the longest-striking Palestinian prisoner, has now gone without food for one month to demand an end to his arbitrary imprisonment, and despite his severe weakness after a month of hunger strike, he was attacked by Israeli occupation prison guards on Tuesday, 10 August inside the Negev desert prison.

Repressive units invaded section 2 of the Negev prison after the detainees held there protested Israeli jailers’ assault on Zeidat, especially in his weakened physical state. These Israeli forces ransacked and destroyed Palestinian prisoners’ belongings during the attack, after which the detainees closed their sections and returned their meals.

Alaa al-Araj, 34, joined the hunger strike against his administrative detention on Sunday, 8 August. He is held in Megiddo prison and has been jailed without charge or trial since June. He has now been thrown into the isolation cells in Megiddo in an attempt to pressure him into ending his strike. In addition to the assault on Salem Zeidat, striking detainees have been blocked from meeting their lawyers and repeatedly transferred from prison to prison, putting further pressure on their bodies.

Four of the hunger strikers, including Ahmad Nazzal, Mohammed Abu Sal and Ahmed Abu Sal, suspended their strikes after reaching agreements to end the administrative detention orders against them or not to renew the orders. Mohammed Nuwwara also suspended his hunger strike against his solitary confinement.

What Is Administrative Detention?

Administrative detention was first used in Palestine by the British colonial mandate and then adopted by the Zionist regime; it is now used routinely to target Palestinians, especially community leaders, activists, and influential people in their towns, camps and villages.

On Wednesday, 11 August, Palestinians in Gaza protested outside the UN High Commission for Human Rights’ office in Gaza in support of the hunger strikers, demanding that international institutions carry out their responsibilities to protect Palestinian detainees and hold Israeli officials accountable in international courts.

Who Are the Hunger Strikers?

1. Salem Zeidat: from Bani Neim – Hebron, started the strike 31 days ago. Salem Zeidat is 40 years old and has been jailed without charge or trial since 22 February 2020; he is married andd the father of 5 children, held in the Negev Prison.

2. Mujahed Hamed: from Silwad – Ramallah, started the strike 29 days ago. He has been detained since 22 September 2020 and married with a son, who was only one month old when he was seized from his home; he is held in the Negev prison.

3. Mohammed A’mar: from Tulkarem, started the strike 29 days ago. Mohammed A’mar is 26 years old and has been jailed without charge or trial since October 2020, held in the Negev prison.

4. Kayed Fasfous: from Dura – Hebron, started the strike 29 days ago. He is 32 years old, detained without charge or trial since October 2020, and held in Ramon prison.

5. Rafat Darawish: from Dura – Hebron, started the strike 28 days ago. He is 28 years old, detained since October 2020 without charge or trial. He is married with one child and suffers from health problems; he is jailed in Ramon prison.

6. Fadi al-Amour: from Hebron, started 22 days ago. Al-Amour, 31, was seized by the occupation on 20 May 2021 after being released in 2020 after serving six years in Israeli prisons. His brother, Mohammed, is also jailed without charge or trial under administrative detention; he is held in the Negev prison.

7. Miqdad Qawasmeh: from Hebron, started 21 days ago. Miqdad Qawasmeh is a Palestinian university student, 24 years old. He has been jailed without charge or trial since January 2021 and is held in Ofer prison.

8. Yousef al-Amer: Jenin, started 14 days ago. Yousef al-Amer is 28 years old, and previously launched a hunger strke against his administrative detention. He has been jailed since June 2020 and was sentenced to one year in Israeli prison; after his sentence ended, he was transferred to administrative detention in May 2021 rather than being released.

9. Ahmad Hamamra: from Beit Sahour, started the strike 12 days ago. He has been imprisoned without charge or trial since 17 August 2020 and previously participated in the 2017 collective hunger strike while detained.

10. Amjad Nammoura: from Dura, al-Khalil (Hebron), launched his strike 7 days ago. In the past, he spent over 5 years in Israeli prison, much of that in administrative detention. He is 38 years old, married, and the father of three children; he has been imprisoned since October 2020.

11. Akram Fasfous: from Dura, al-Khalil (Hebron), launched his strike 7 days ago. He is the brother of Kayed Fasfous, on hunger strike for 28 days, and of Mahmoud Fasfous, who was previously on strike before suspending due to severe heatlh deterioration. He has been jailed without charge or trial under administrative detention since October 2020. He is 38 years old, married and the father of four children.

12. Alaa al-Araj: from Tulkarem, launched his strike 4 days ago. He has been jailed since 30 June without charge or trial under administrative detention and is held in Megiddo prison. He is 34 years old.

Samidoun Palestinian Prisoner Solidarity Network urges all supporters of Palestine to take action to support these Palestinian hunger strikers and all Palestinian prisoners struggling for freedom, for their own lives and for the Palestinian people. They are confronting the system of Israeli oppression on the front lines, with their bodies and their lives, to bring the system of administrative detention to an end. Take these actions below to stand with the hunger strikers and the struggle for liberation of Palestine, from the river to the sea!

Independent grassroots international activists have launched a petition in support of the hunger strikers and to end administrative detention. Show your support by signing on – in addition to taking action in person! Sign here: change.org/NoChargeNoTrialNoJail

Take to the streets and join the actions on our full list of events, which is constantly being updated as new actions are announced! Organize your own if there is none in your area, and send us your events at samidoun@samidoun.net.