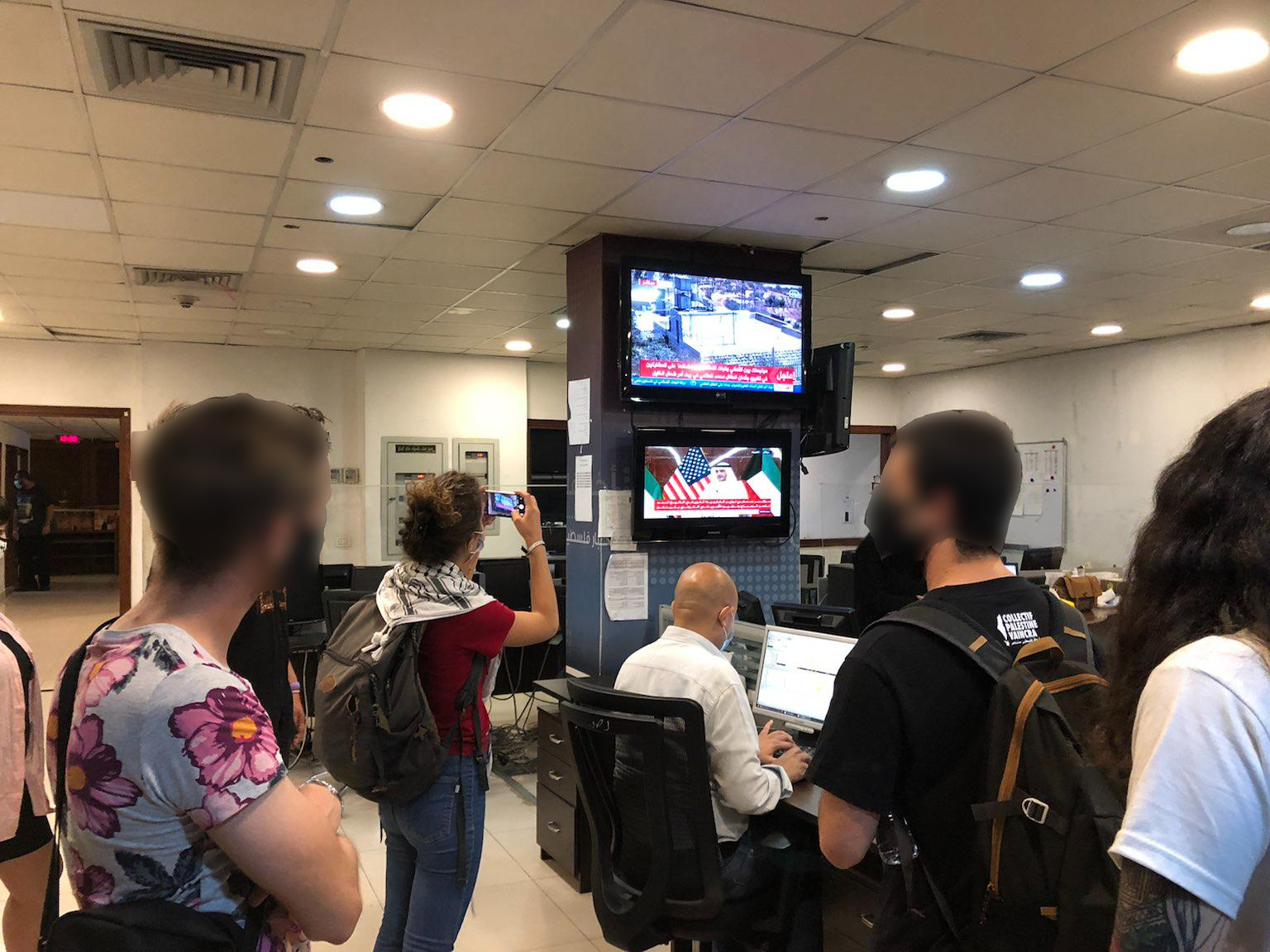 On the morning of Friday 30 August, the Ghassan Kanafani Brigade, the Samidoun delegation to Lebanon, visited the recording studio of the “Palestine Today” TV-channel. We were given a tour of the whole studio, showing us the production and recording rooms, and the studio. The delegation also had the opportunity to meet with Saif Mau’ed, director of Palestine Today, and Mohamad Uthman, who before being the coordinator of correspondents was himself a correspondent in the Great Return March in Gaza, where he was shot by the Zionist military forces. 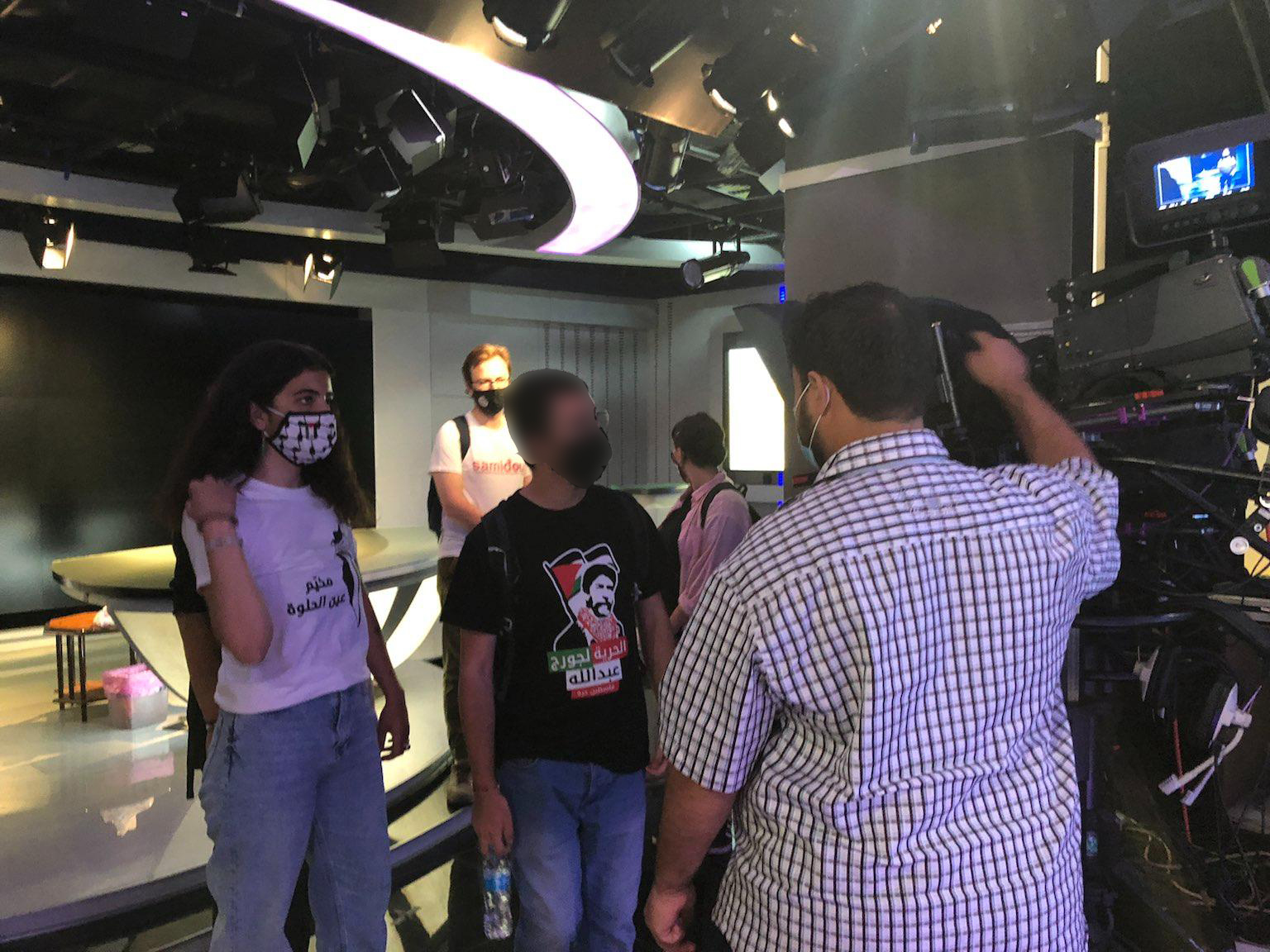 In the meeting Mau’ed and Uthman explained the goals of the channel, as well as highlighting the enormous effort they are making to maintain a counter-hegemonic line of media against Zionist and Palestinian Authority media. During the last heavy offensive on Gaza, the workers stayed overnight at the station in order to be able to broadcast 24 hours a day. 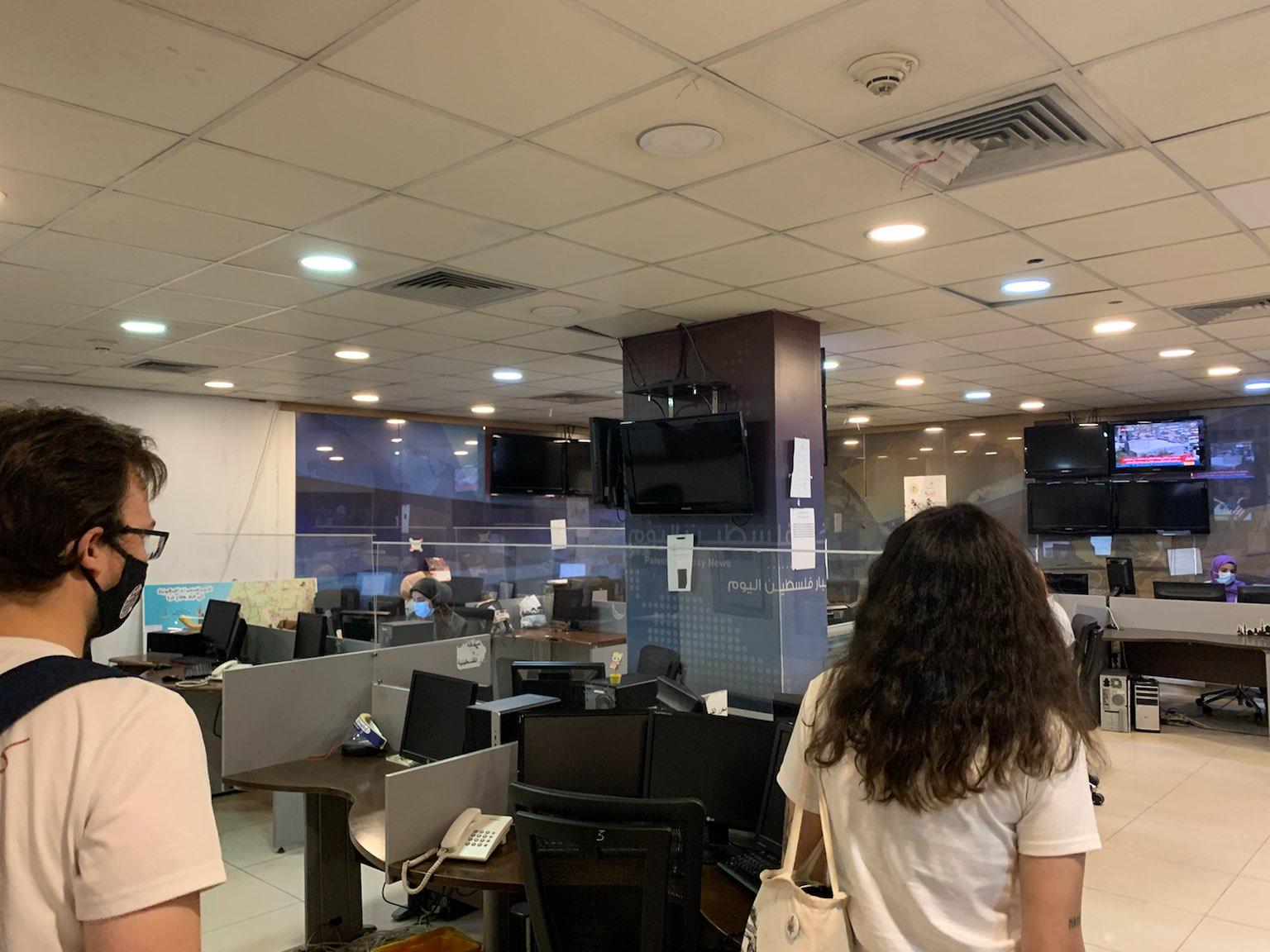 After the delegation presented Samidoun’s political position and activities, both the station and the network agreed to strengthen our cooperation. Finally, Palestine Today proposed a live interview the following day to present Samidoun and the Alternative Path Conference (Masar Badil).

After, the delegation met with the Global Campaign to Return to Palestine, which originally started as a project that unified different pro-Palestinian initiatives and movements in order to bring forces together, protect and advance the right of return to Palestine, and achieve greater capacity to mount substantial pressure for justice in Palestine. Today, organizations from 82 different countries work together in the campaign. 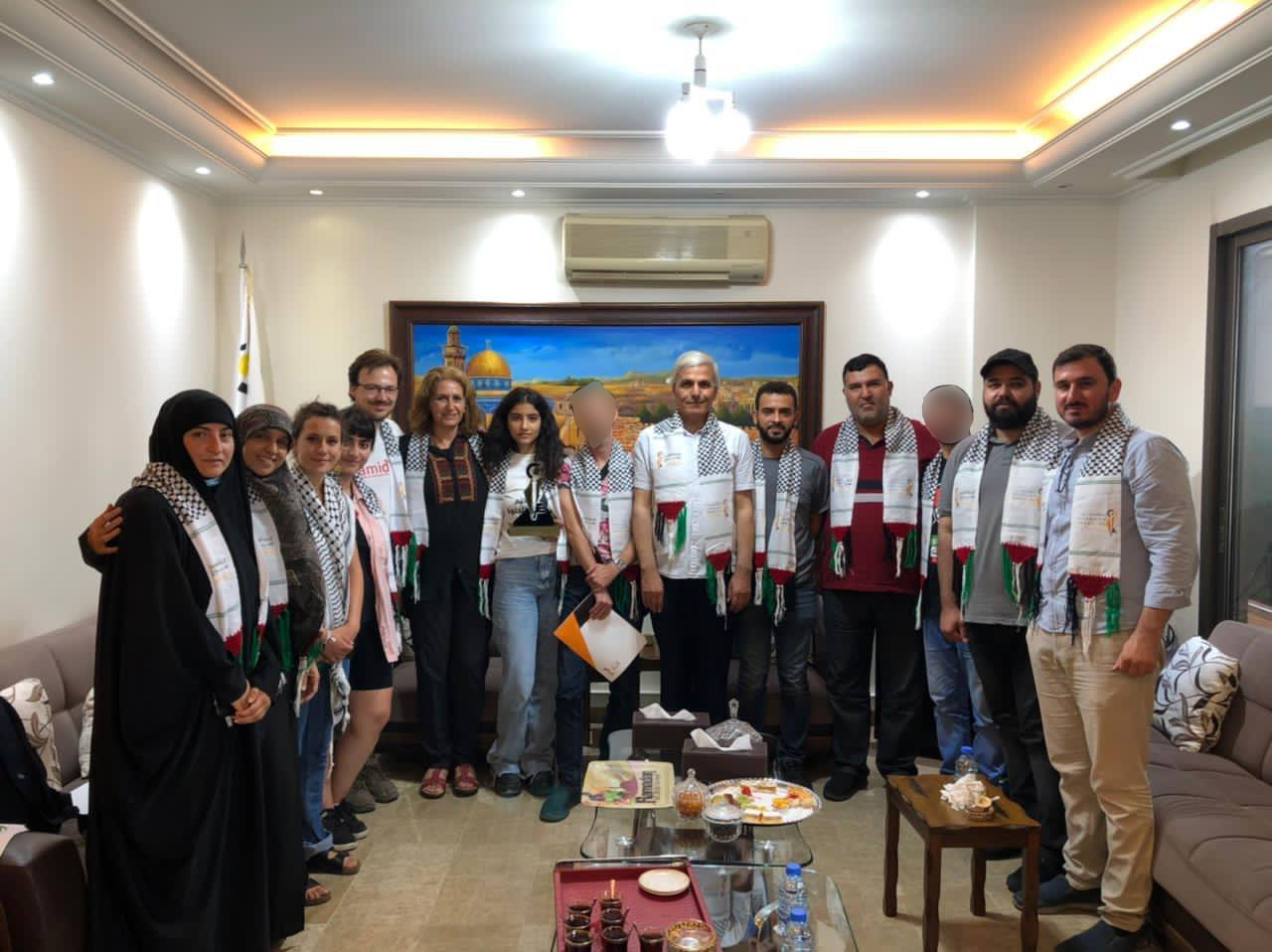 The campaign was launched after more than 50,000 Palestinians from the Palestinian refugee camps in Lebanon and Syria demonstrated in 2011 for their right to return to Palestine. On the day of the big march, Palestinian youth could not be contained by the Lebanese army in their desire to cross the border to Palestine. Eight of them were martyred by the Zionist occupation. 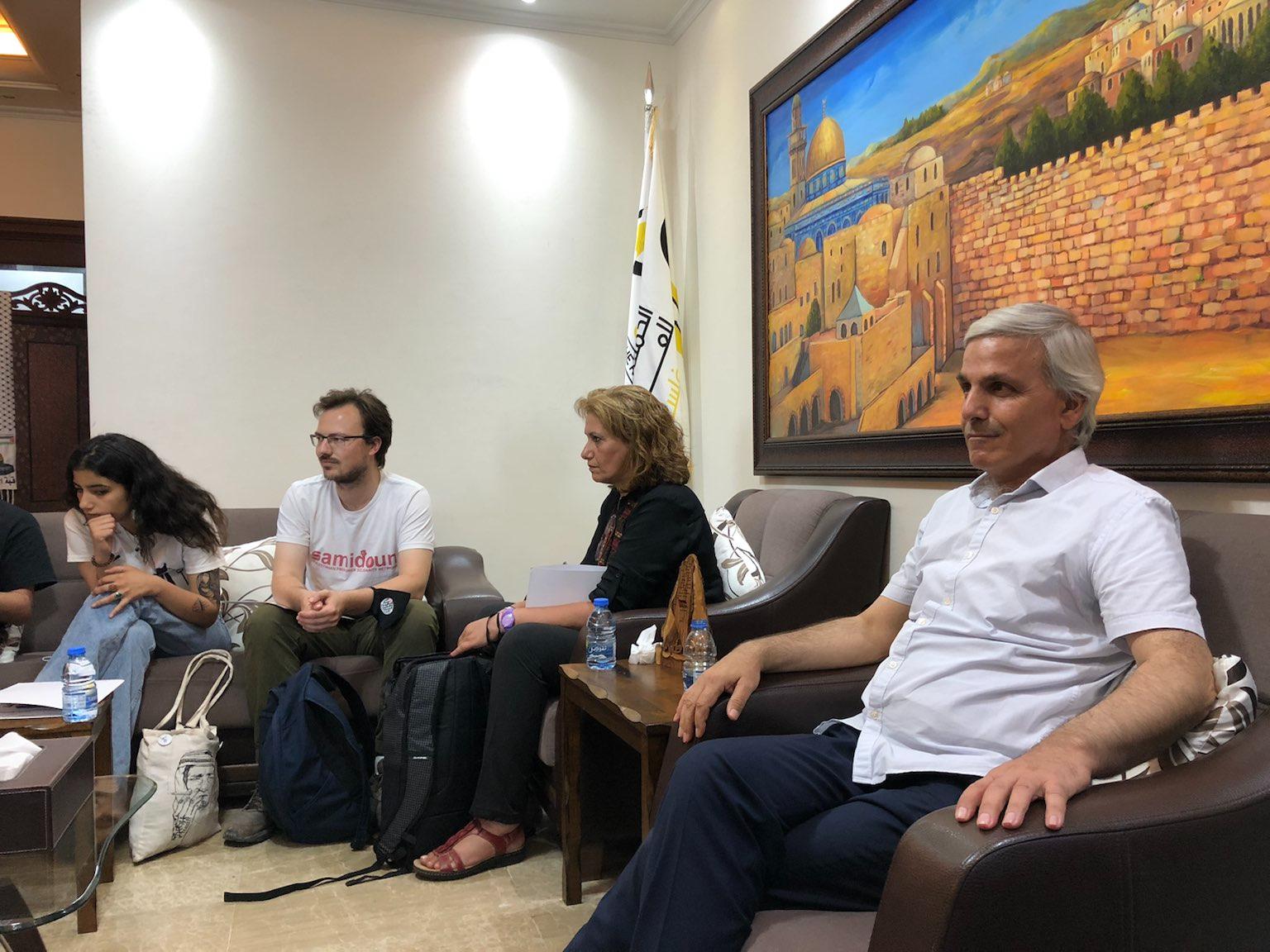 As for the scope of the campaign’s work, they focus primarily on work outside Palestine and Lebanon, mainly because it is in the West that the Zionist narrative has the most strength and the least counterweight. Therefore, they intend that through a clear exposition of the facts, people who were considered neutral will take an active position of solidarity with Palestine. 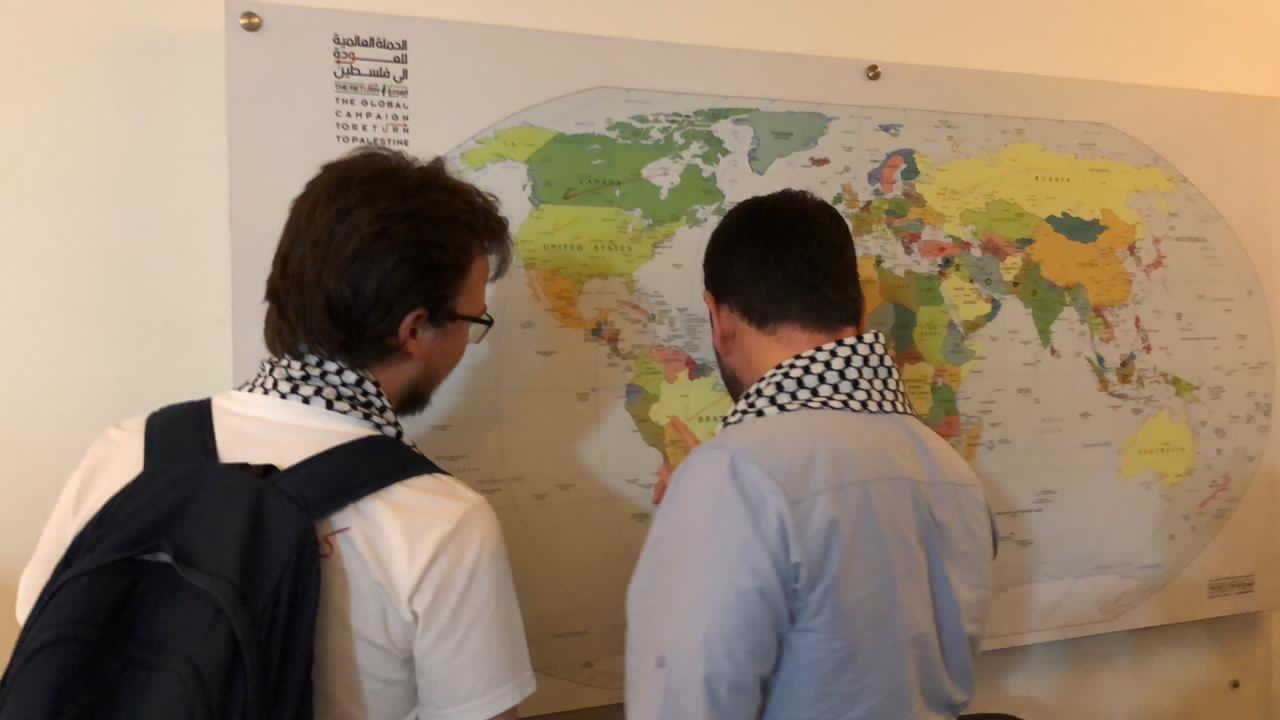 In addition, Mohammed al Abed, co-founder of the campaign, explained some of the programs the Campaign is

The first of these is a program called “Rebuild Gaza,” an initiative started in 2003 by the APN (Arab Group for the Protection of Nature) with which they intend to rebuild the agricultural sector in Gaza after subsequent Israeli attacks. 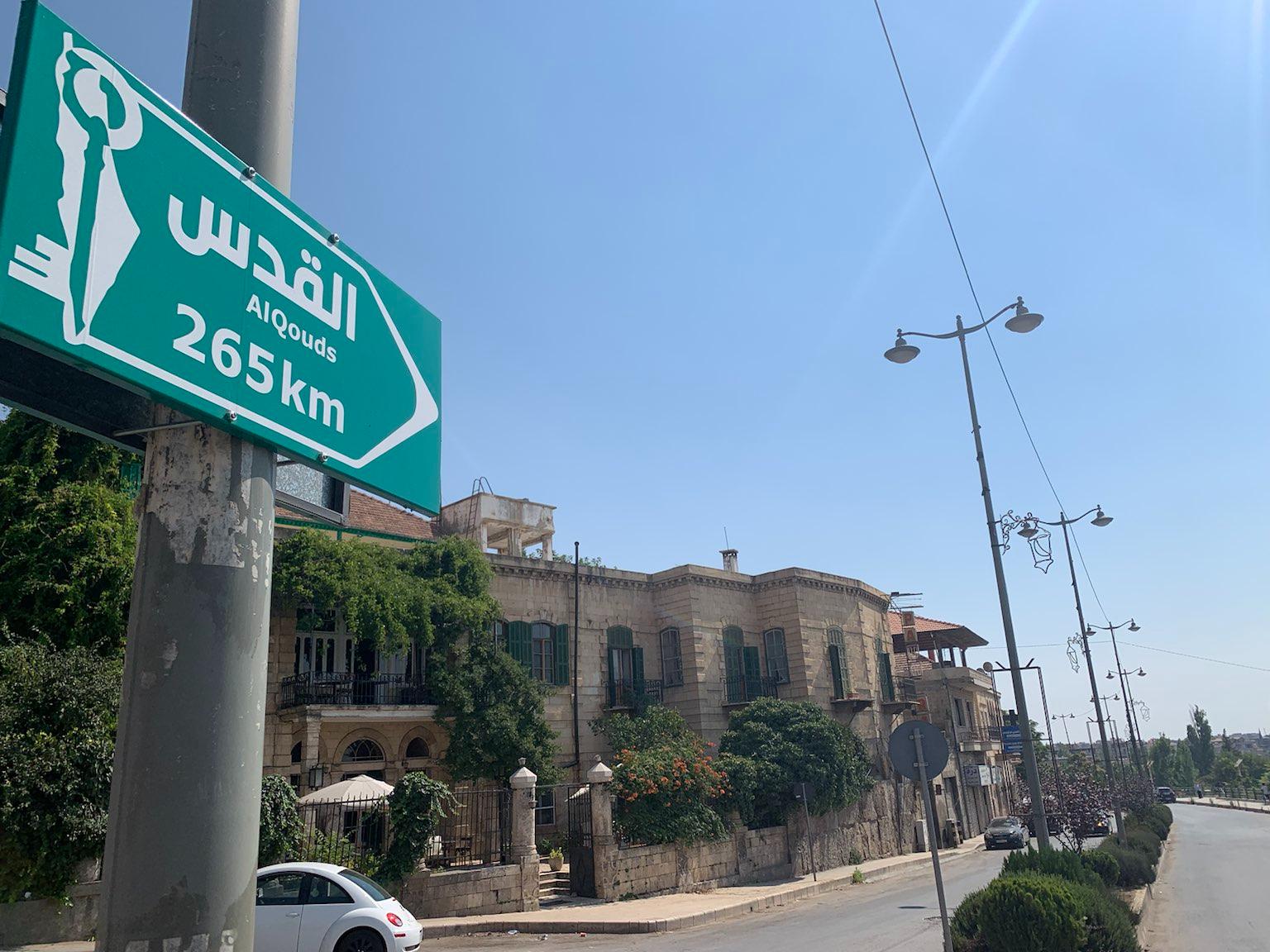 The second: “Street sign project”, is focused mainly on creating awareness and visibility of the Palestinian cause by putting up street signs around the world displaying the distance to Jerusalem.

And the third is the Intifada Week planned for September.

Once these programs were discussed, Samidoun and the Global Campaign to Return to Palstine agreed to elevate their existing cooperation and work collectively to achieve return and liberation of Palestine from the river to the sea.

The Campaign praised the delegation’s work, gifting the delegates a small statue depicting the map of Palestine crossed by the key of return. 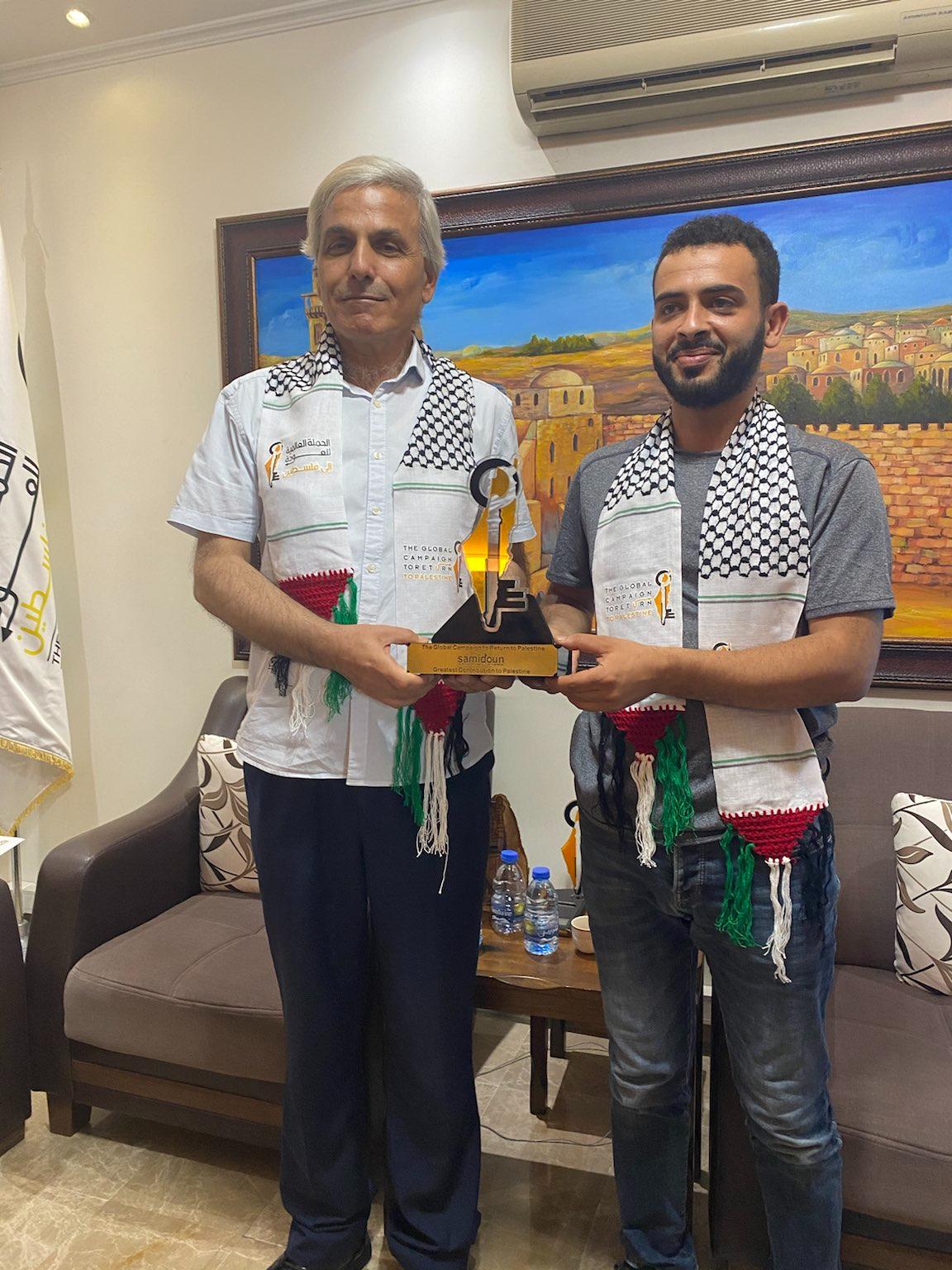 Subsequently, the brigade met with the Lebanese citizens movement party (Citizens in a State) constituted in 2016 as a progressive, democratic and secular force that seeks a reconstruction of the Lebanese political system and explicitly includes in its political program the issue of refugees and the Palestinian community in Lebanon, as well as the discrimination and institutionalized racism of which they are victims.

In the meeting, some points in common between the party and the Samidoun network were made explicit, mainly those addressing the common enemy, Zionism, and envisioning the political future of Palestine as well as Lebanon, looking toward frameworks of justice, equality and democracy. Both platforms had a long discussion in which they shared different political and strategic perspectives on how to approach the decolonization of Palestine, reaching a mutual understanding and willingness to collaborate together. 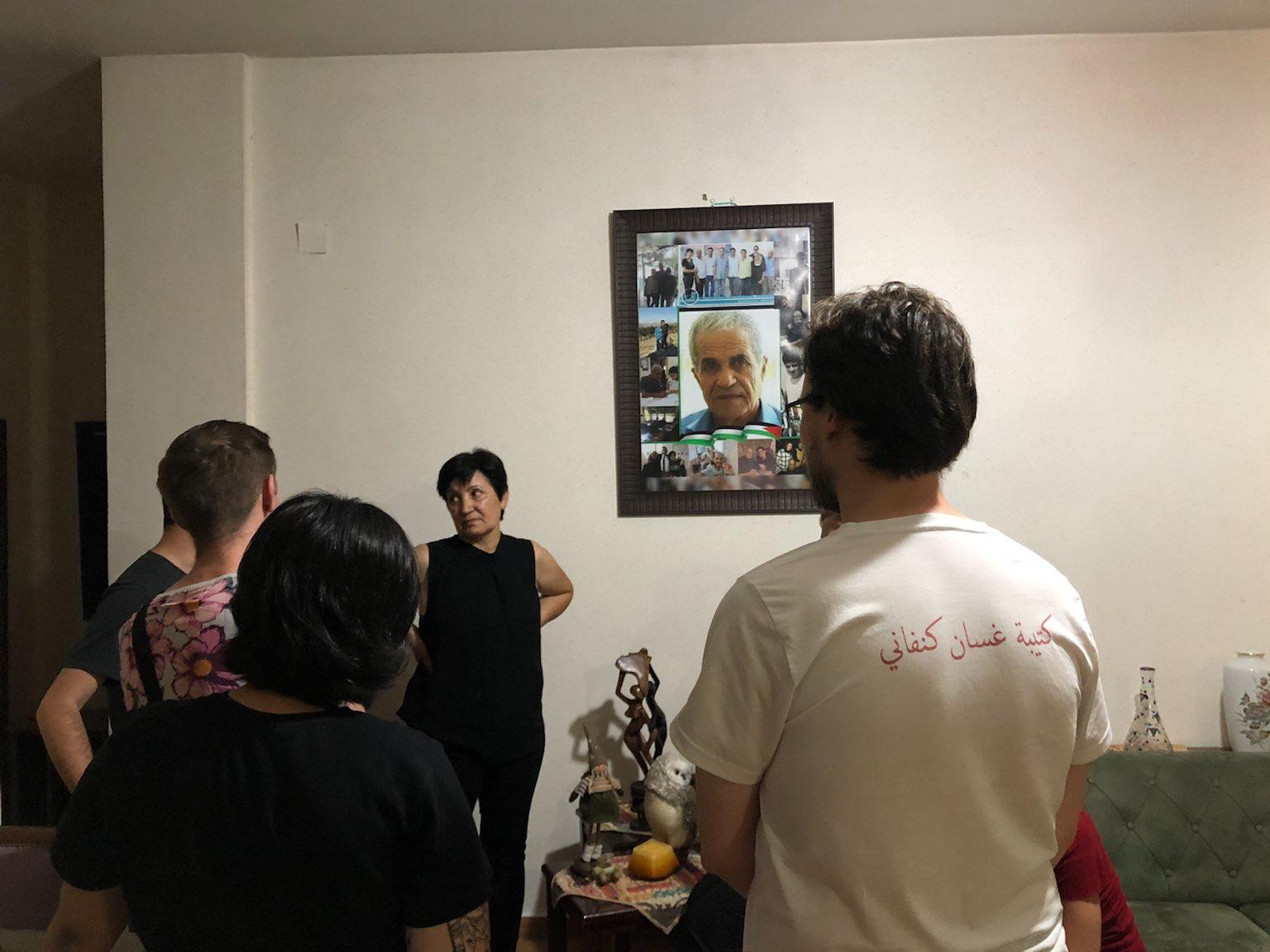 The delegation then headed to northern Lebanon, to Hermel on the Syrian border, to visit Lebanese activist and politician Zaynab Chams, widow of comrade and Palestinian leader, Maher Al Yamani, co-founder of the PFLP. Maher al-Yamani dedicated his entire life to fighting for the Palestinian cause, and Chams is an active member of the Arab nationalist party, with which she ran in the municipal elections of her city. She is also an activist for social rights and a feminist. 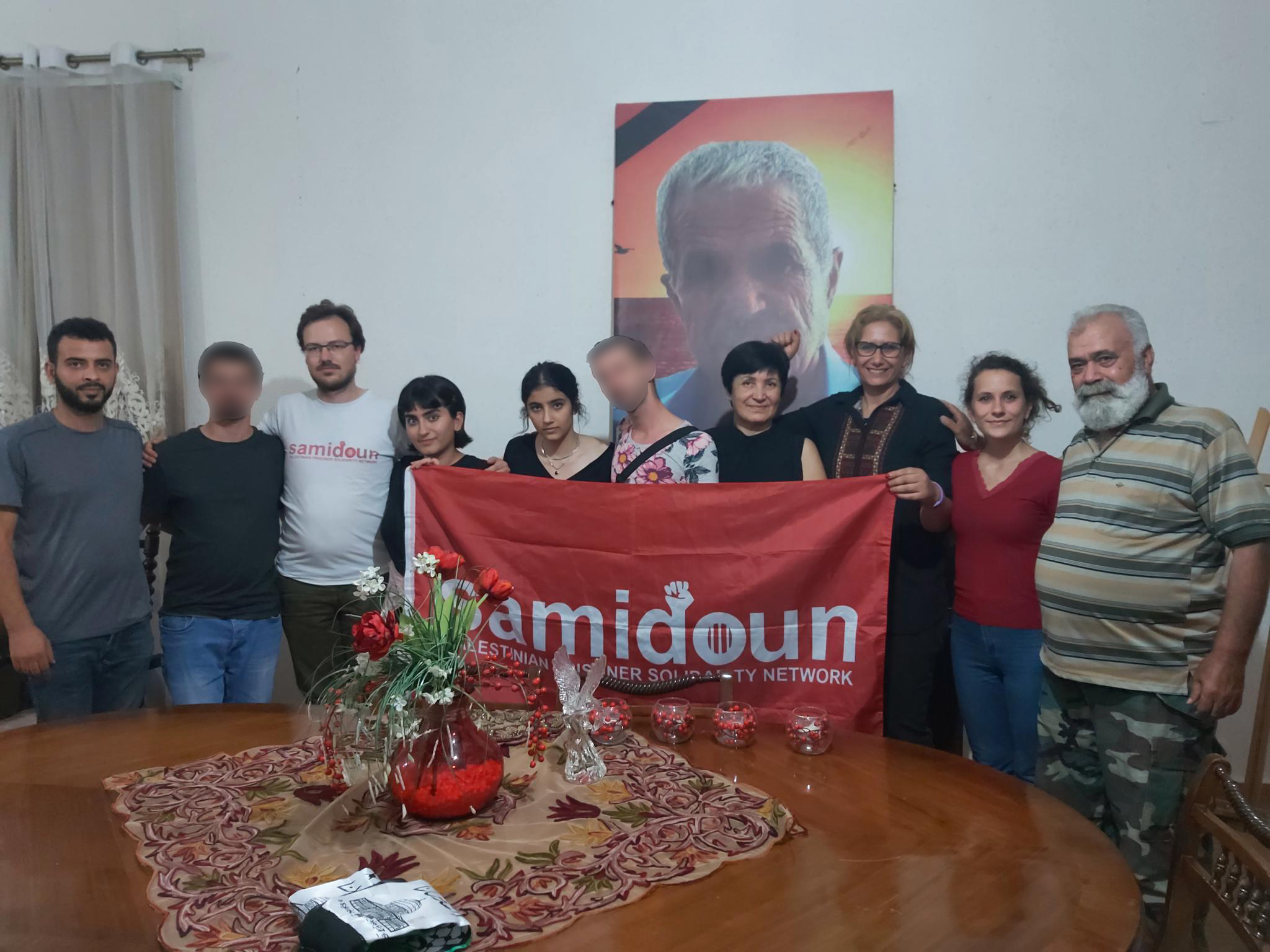 On Saturday 31, the Samidoun delegation in Lebanon visited the Palestinian refugee camp of Jalil in the Bekaa Valley, very close to the historic city of Baalbek. This refugee camp faces particularly harsh conditions, partly because it is located far away from the urban centers of Lebanon. 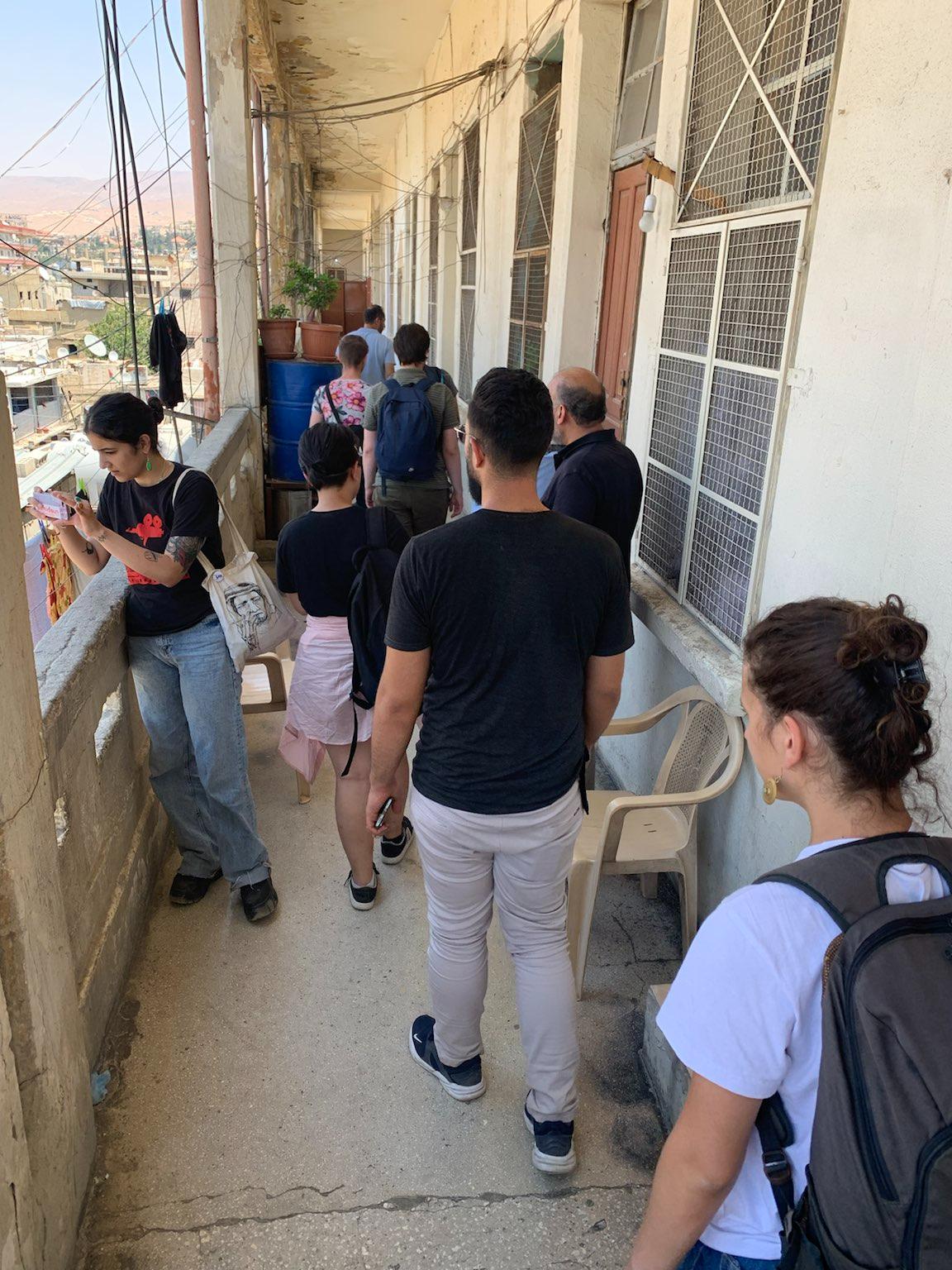 The camp is also known by the name of Wavel, especially by European international organizations. In particular the United Nations. Archibald Percival Wavel was a British marshal who, acting on behalf of the British colonial mandate, was assigned to Palestine in 1937 to suppress the Palestinian revolution against the British occupation. The camp was originally a French army barracks.

Formally established and recognized by UNRWA in 1952, the refugee population of Jalil has reached 10.000, with some thousands more since the war in Syria, in addition to Palestinian registered refugees, most of whom come from the village of Jalil in northern Palestine. 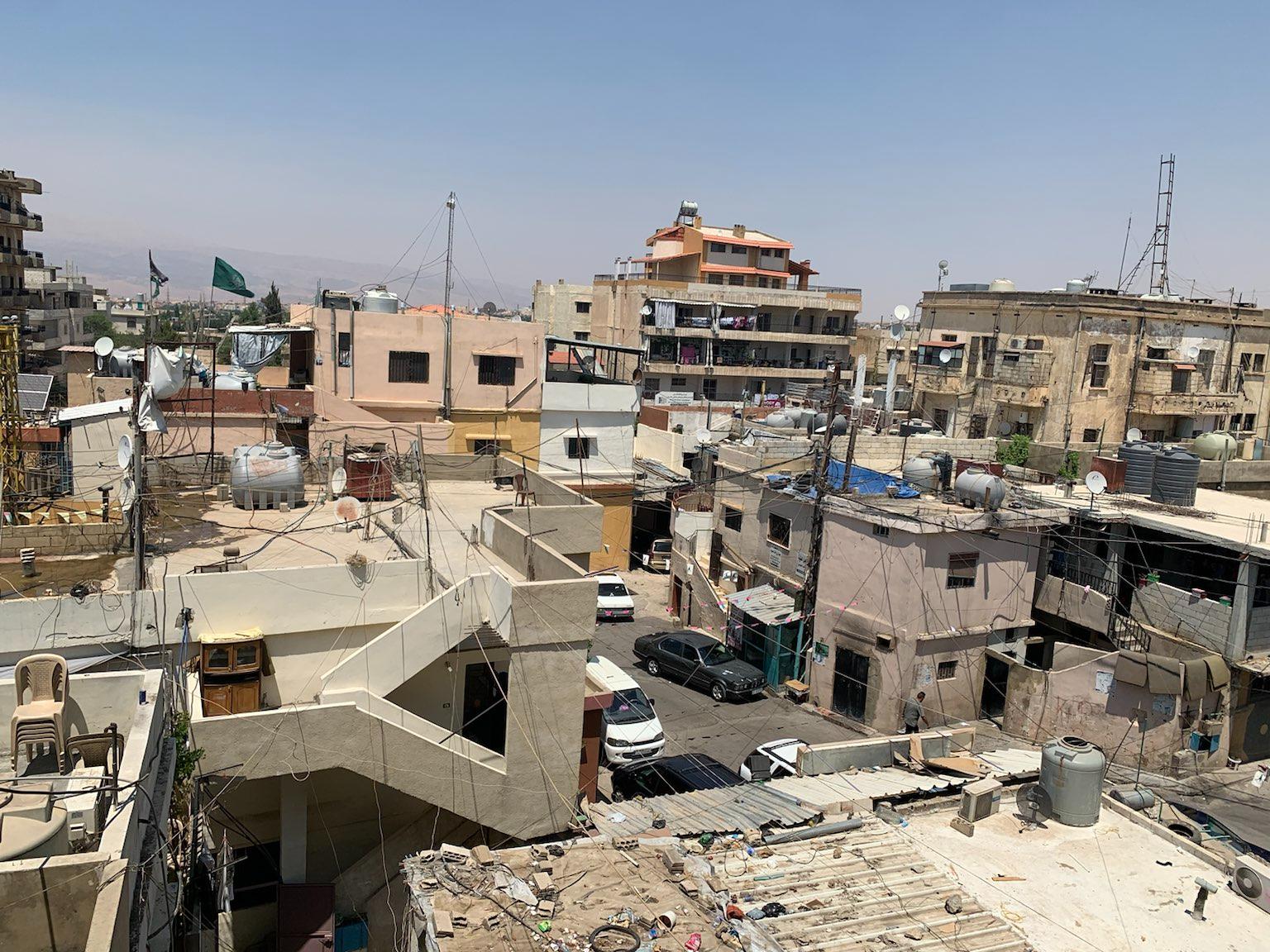 Conditions inside the camp are deplorable. Overcrowding and lack of space has reached such an extent that there are thirty people located in the cemetery surrounding the camp. Makeshift dwellings have been set up where entire families are living, literally among graves. The children are afraid at night because of the dark atmosphere in the cemetery.

Among the graves, there was the small room of an old Palestinian man born in 1934 who had spent a lifetime as a refugee, forcibly expelled in 1948 from his land in Palestine, then in 1967 from the Golan, and after living for decades in Yarmouk refugee camp in Syria, he had to flee to al Jalil camp. He was just one example of the reality of so many Palestinians who have spent a lifetime being displaced by colonialism and imperialism. 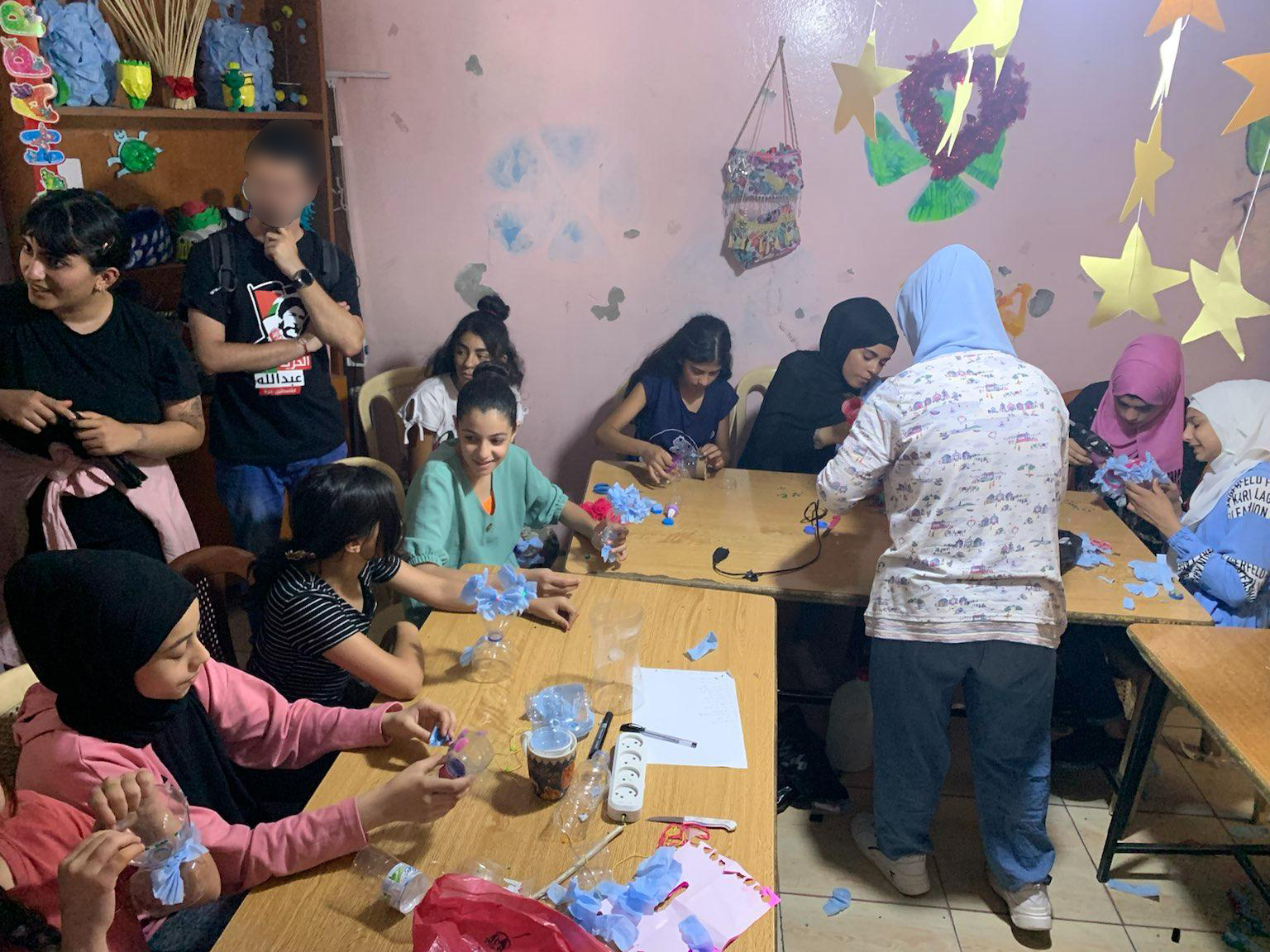 During the evening, we met with members of the local committee of Masar Badil, where we discussed the situation in Lebanon.

Reflecting briefly on this delegation, we deem the mission of the Ghassan Kanafani Brigade successful, as we achieved our objectives of gaining a deeper understanding of the situation in Lebanon, especially that of the Palestinian people. Furthermore, we initiated and strengthened relations with Palestinian and Lebanese organizations that are fighting for liberation and return.

The delegation is self-funded by Samidoun Network and the participants taking part in the delegation and its meetings. However, the delegation also aims to support organizing and build resources in the Palestinian refugee camps and throughout Lebanon, which is currently experiencing an extreme financial crisis, the greatest burden of which is falling on the most marginalized.

Your contribution can help the delegation to support the work of grassroots organizers in the Palestinian refugee camps to sustain and build their work as well as launching new centers for organizing for liberation and return for Palestine. Make your donation below to support this important initiative.

Over 1,000 people march in Lannemezan to demand the immediate release of Georges Abdallah