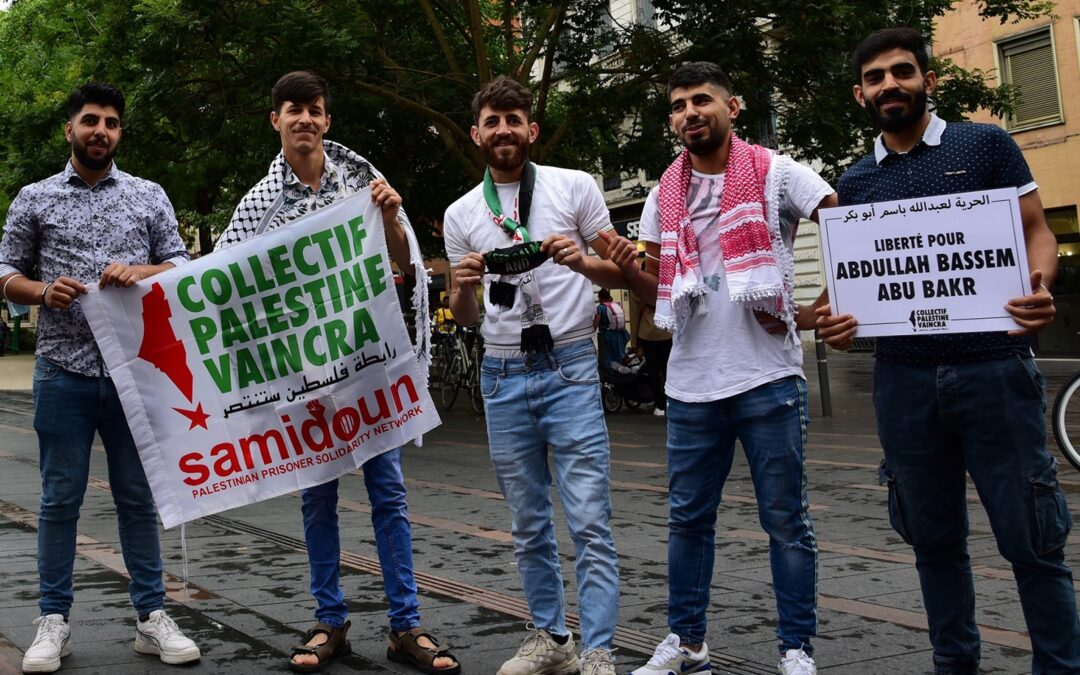 On Saturday, 7 August, the Collectif Palestine Vaincra organized a Palestine Stand in central Toulouse, France, outside the exit of the Capitole metro station. Collectif Palestine Vaincra is a member organization of the Samidoun Network internationally. The stand came as part of the international mobilization to support Palestinian prisoners on hunger strike, demanding their immediate release and the end of Israeli administrative detention. Administrative detention is imprisonment without charge or trial, indefinitely renewable every six months, under which Palestinians are routinely jailed for years at a time.

Despite the rainy weather, participants distributed almost 1,000 leaflets on the situation of Palestinian prisoners, engaging in hundreds of conversations with passers-by. Many people on the streets of Toulouse were outraged by the violations of the Israeli occupation. The stand distributed many flyers and stickers about the history of Zionist colonialism in Palestine and the campaign to boycott Israel, as well as the campaign to free Georges Abdallah. Georges Abdallah is a Lebanese Arab Communist resistance struggler for Palestine, imprisoned in France since 1984.

The stand was adorned with large banners calling for freedom for all Palestinian prisoners and highlighting the cases of Georges Abdallah and Ahmad Sa’adat, imprisoned general secretary of the Popular Front for the Liberation of Palestine.

Dozens of people participated in the stand by writing letters in Arabic, English and French to Palestinian prisoners and signing petition cards to free Georges Abdallah.

The stand also drew attention to the case of Palestinian child prisoner Abdullah Bassem Abu Bakr. Abdullah, 17 years old, was seized from his home in Yabad in the occupied West Bank of Palestine on 25 July and was severely injured by Israeli occupation soldiers. His family has been denied visits with him despite him being held and shackled in the hospital. Dozens of people took photos to demand Abdullah’s freedom, while many more wrote cards to send to his family to express solidarity with their struggle to free their beloved son.

The Collectif Palestine Vaincra organizes actions and initiatives in Toulouse every month to support the Palestinian people and their resistance for the liberation of Palestine from the river to the sea. Contact the Collectif to get involved, or reach out to Samidoun Network to get involved in your local area.