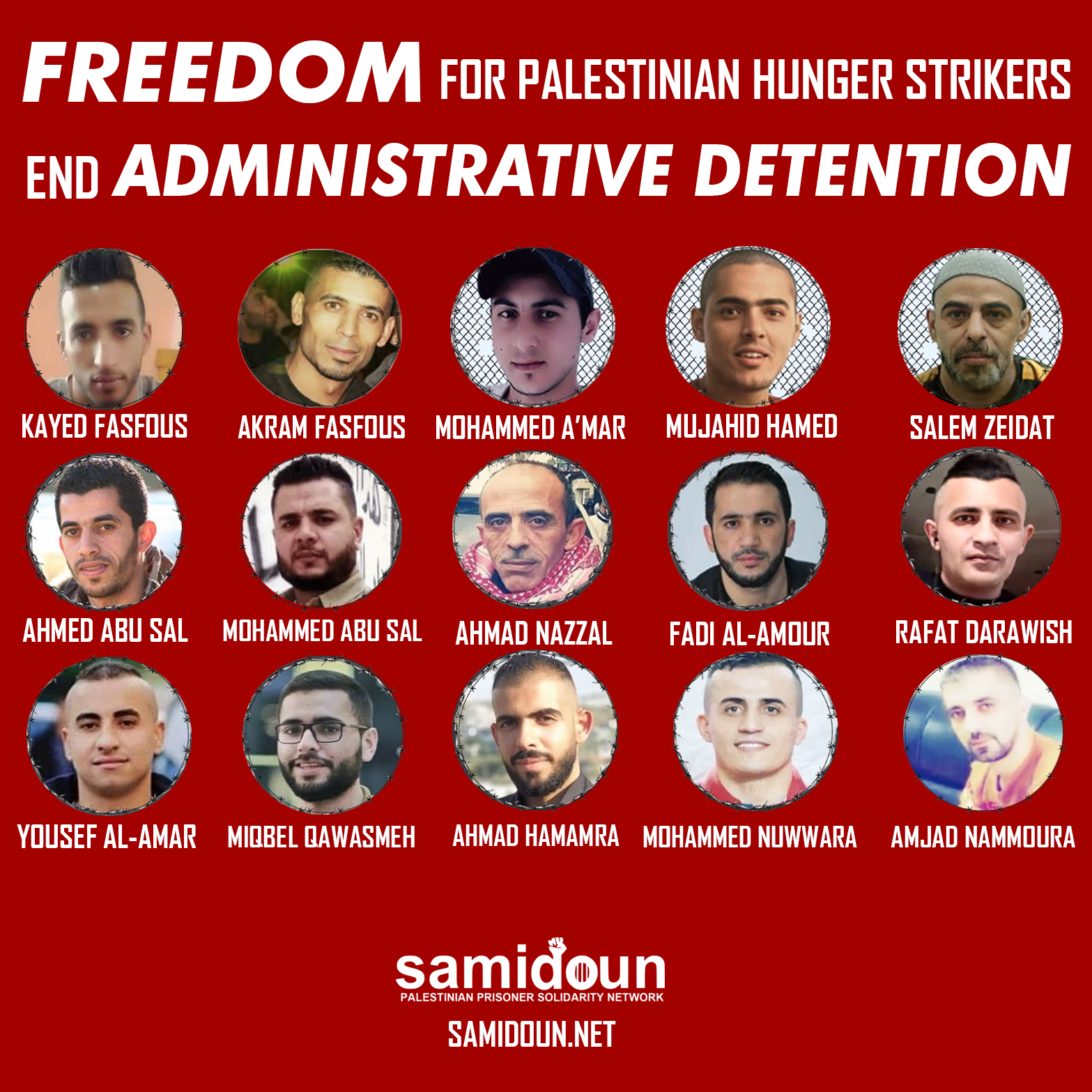 As of 5 August 2021, 15 Palestinians continued their hunger strikes in Israeli occupation, 14 of them protesting their administrative detention — imprisonment without charge or trial — and one, Mohammed Nuwarra, protesting his ongoing solitary confinement. On 5 August, two detainees joined the hunger strike: Akram al-Fasfous, joining his brother, Kayed al-Fasfous, who has been on hunger strike for 22 days.

Their other brother, Mahmoud al-Fasfous, also jailed without charge or trial, suspended his hunger strike earlier on Thursday after a severe deterioration of his health. Amjad Nammoura, of Dura near al-Khalil, also joined the hunger strike on Thursday in protest of his administrative detention.

Earlier, three Palestinian prisoners suspended their hunger strikes: Alaa el-Din Ali and Maher Dalaysheh, both Palestinian refugees from Jalazone camp near Ramallah, and Guevara Nammoura, the Palestinian professional football player who has competed on the Palestinian national team. Ali and Dalaysheh suspended their strikes after an agreement to set an end date for their administrative detention. Nammoura also suspended his strike after an agreement to conclude his administrative detention before the Israeli military court on 5 August.

While the occupation military court confirmed his detention on 5 August, reducing it to three months instead of four, it did not verify that this was a final order, which leaves open the possibility that the detention order could be renewed.

Administrative detention orders are issued for up to six months at a time and are indefinitely renewable. As a result, Palestinians routinely spend years at a time jailed without charge or trial in Israeli occupation prisons on the basis of so-called “secret evidence” denied to both the detainee and their lawyer. Administrative detention was first introduced to occupied Palestine by the British colonial mandate and then adopted by the Zionist occupation in order to suppress Palestinian resistance.

Fellow Palestinian prisoners have joined protests inside Israeli occupation prisons in support of the detainees on hunger strike. A series of rolling solidarity strikes have been announced, with the first participants including Bara’a Issa from Anata in Jerusalem, Taha al-Tarwa from Taffouh in al-Khalil, Malik al-Sa’ada from Halhoul and Qasim Masalmeh from Beit Awwa, all held in Ramon prison.

Israeli occupation forces have escalated their repression targeting the hunger strikers, including throwing them into isolation, storming and ransacking their cells, and repeatedly transferring them from one prison to another, a physically and mentally exhausting and taxing process, especially as the detainees begin to experience severe health effects. The Israeli prison system has also delayed in issuing permits to lawyers to visit the hunger-striking detainees, attempting to deprive them of communication and representation.

Samidoun Palestinian Prisoner Solidarity Network urges all supporters of Palestine to take action to support these Palestinian hunger strikers and all Palestinian prisoners struggling for freedom, for their own lives and for the Palestinian people. They are confronting the system of Israeli oppression on the front lines, with their bodies and their lives, to bring the system of administrative detention to an end. Take these actions below to stand with the hunger strikers and the struggle for liberation of Palestine, from the river to the sea!

Independent grassroots international activists have launched a petition in support of the hunger strikers and to end administrative detention. Show your support by signing on – in addition to taking action in person! Sign here: change.org/NoChargeNoTrialNoJail

Take to the streets and join the actions on our full list of events, which is constantly being updated as new actions are announced! Organize your own if there is none in your area, and send us your events at samidoun@samidoun.net.