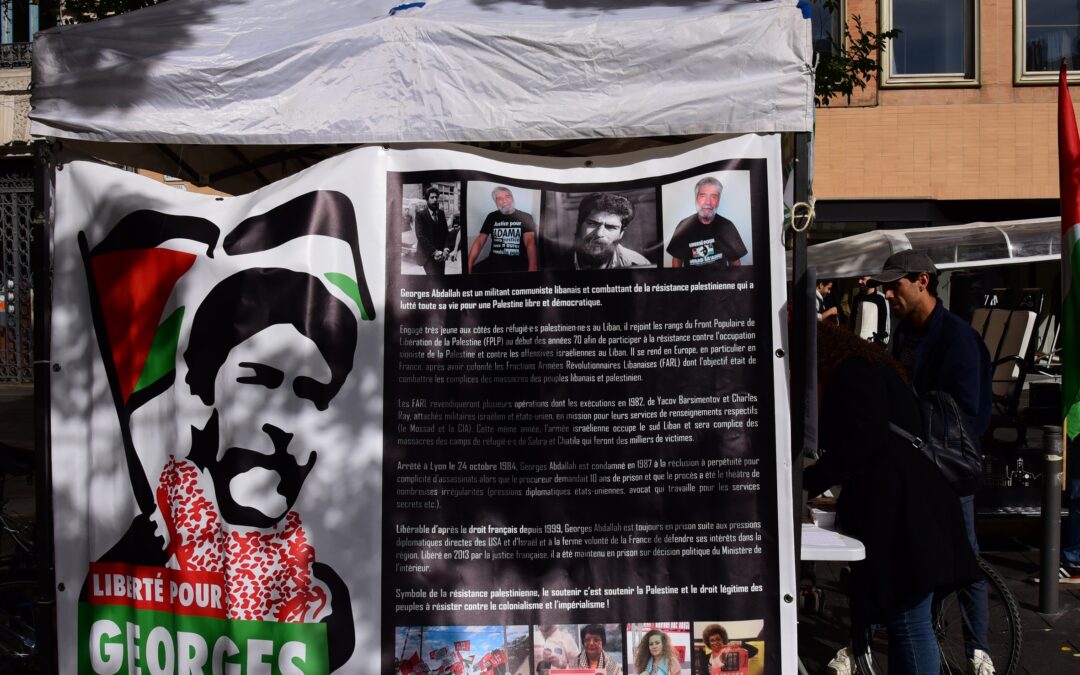 The following report is mostly translated from the French at Collectif Palestine Vaincra:

On Saturday, 2 October, the Collectif Palestine Vaincra — a member organization of the Samidoun Network — organized a Palestine Stand from 11 am to 1 pm outside the Capitole metro station in Toulouse, France. The stand was organized as part of the ongoing month of action for the release of Georges Ibrahim Abdallah, the Lebanese Communist and freedom fighter for Palestine imprisoned in French jails since 1984, despite being eligible for release since 1999. 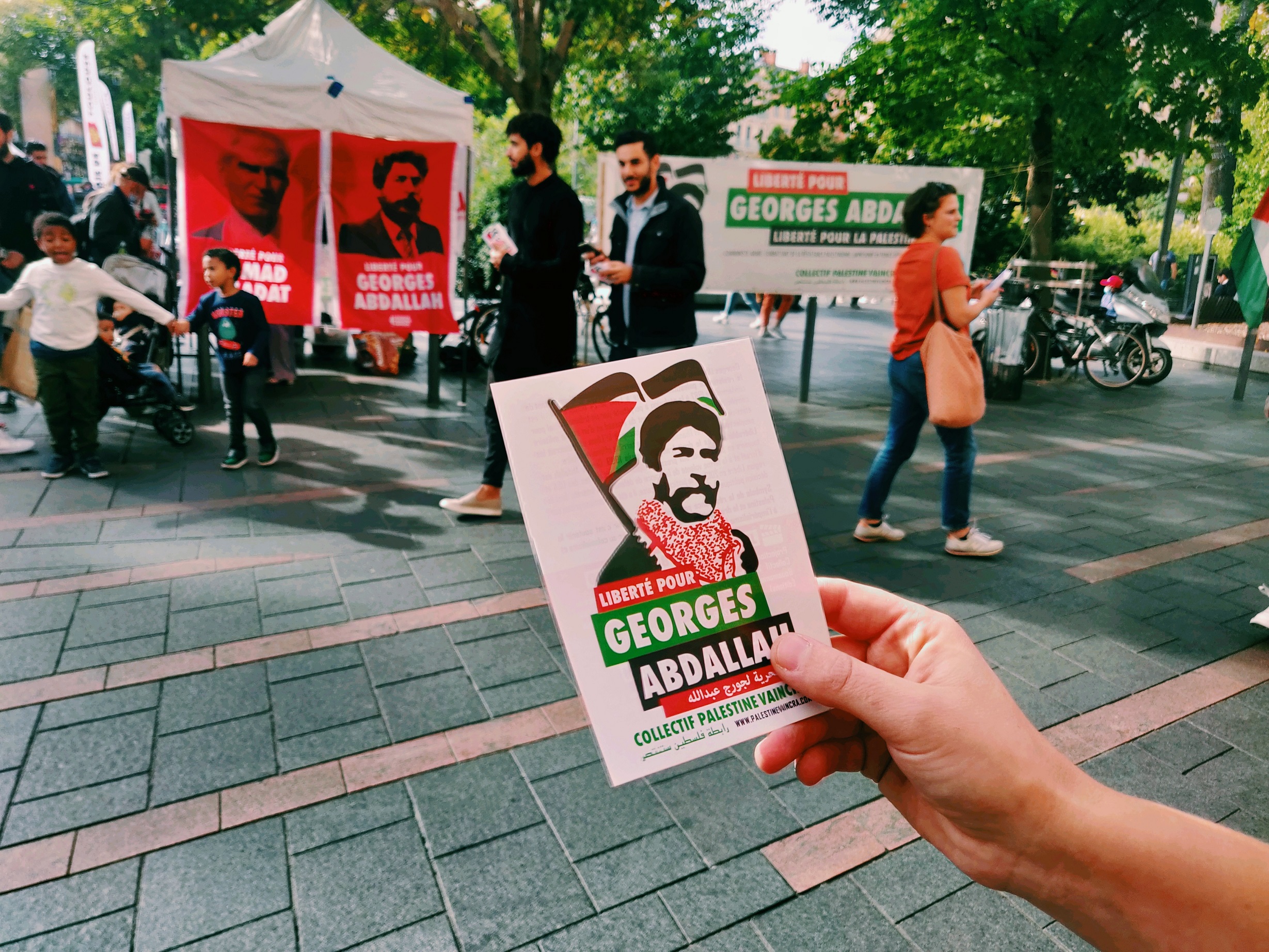 Amid a sunny day, the Collectif installed several large banners calling for the freedom of Georges Abdallah and Ahmad Sa’adat, the imprisoned general secretary of the Popular Front for the Liberation of Palestine. The stand was surrounded by Palestinian flags, and activists offered free stickers, flyers and leaflets to passers-by. The stand also offered books, including the new book by Said Bouamama, The Georges Abdallah Affair. Many people were attracted by a large explanatory banner presenting the history of Georges Abdallah’s case and struggle. 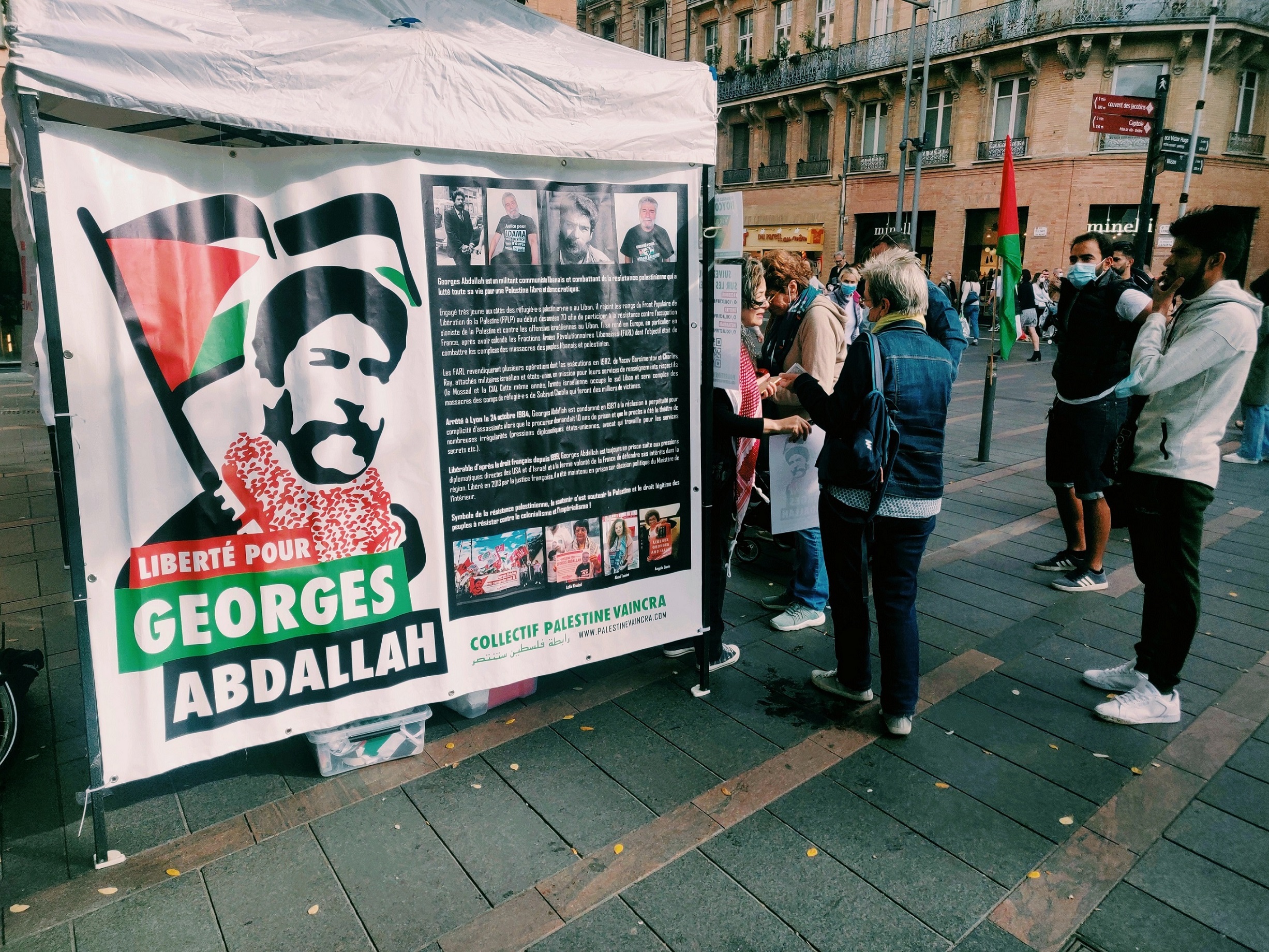 For over 2 hours, participants distributed hundreds of flyers and held dozens of discussions with passers-by. Speakers delivered calls to action over the sound system, explaining the history and political commitment of Georges Abdallah as well as the ways he is targeted for political and judicial state revenge. The stand also played music in support of Georges Abdallah and the Palestinian cause, such as “Entre leurs murs” by the rapper VII. 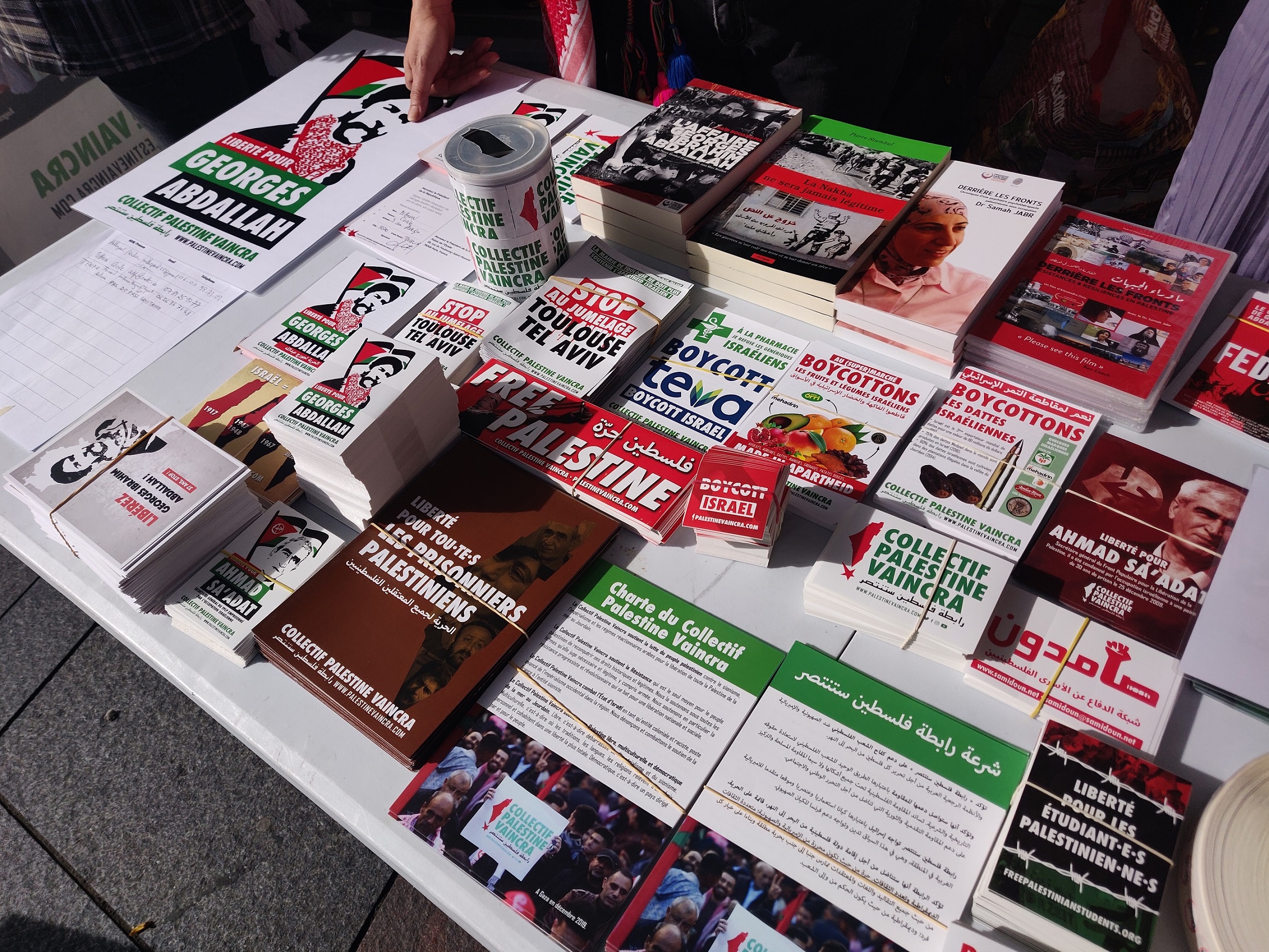 At the same time, many people took solidarity photos in support of the international campaign to liberate Georges Abdallah. Across generations, there is growing support for the release of Europe’s longest-held political prisoner.

The stand builds atop multiple actions being organized in Toulouse by the Collectif to support Georges Abdallah. He has remained imprisoned largely because he refuses to renounce his revolutionary commitment and the legitimacy of his cause: the struggle of the peoples against imperialism, racism and colonialism. 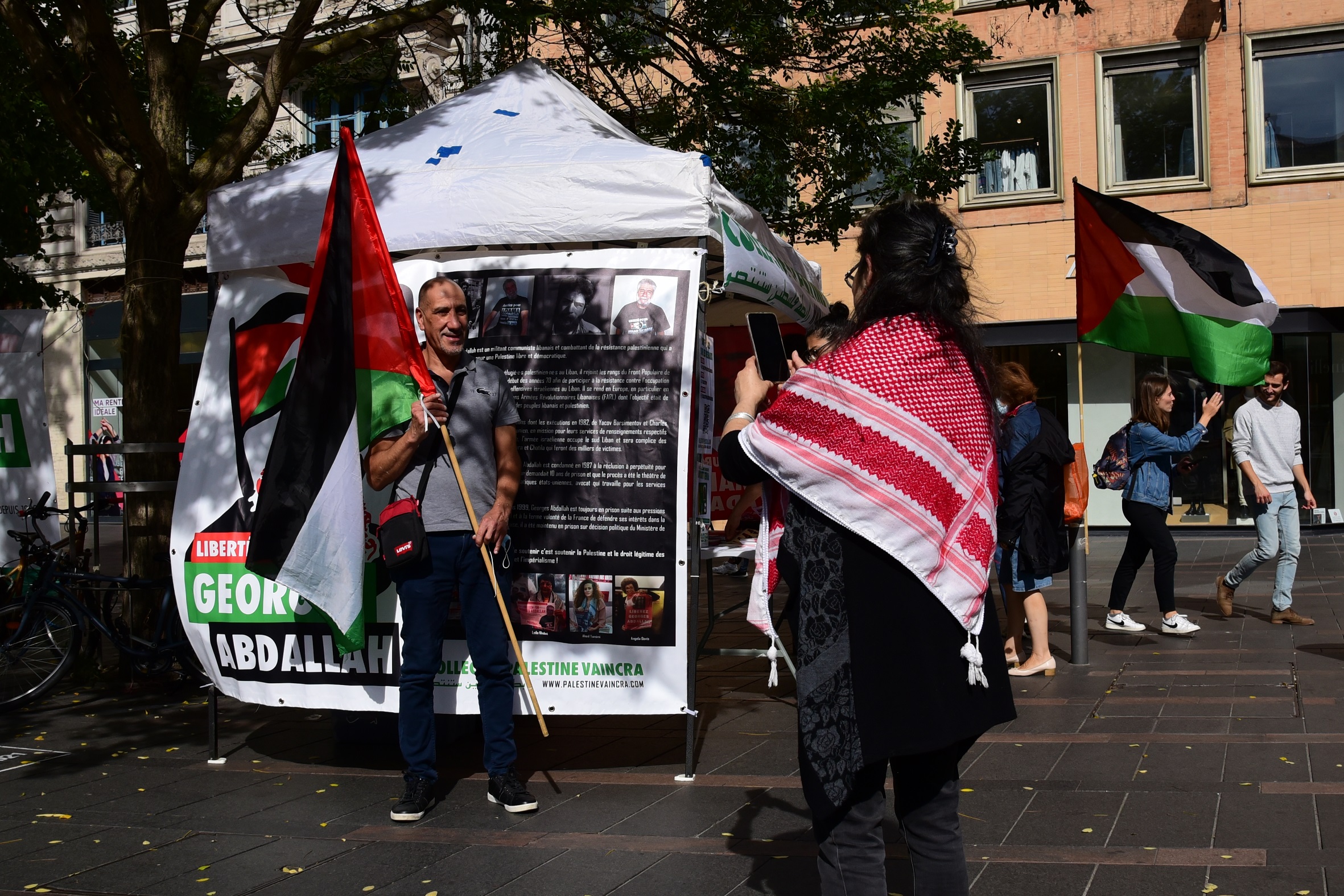 The month of action was launched on 24 September with a Palestine stand at the Bagatelle market, preceded by a twitterstorm on the occasion of the meeting between Emmanuel Macron and the new Lebanese prime minister Najib Mikati, which reached over 540,000 people. 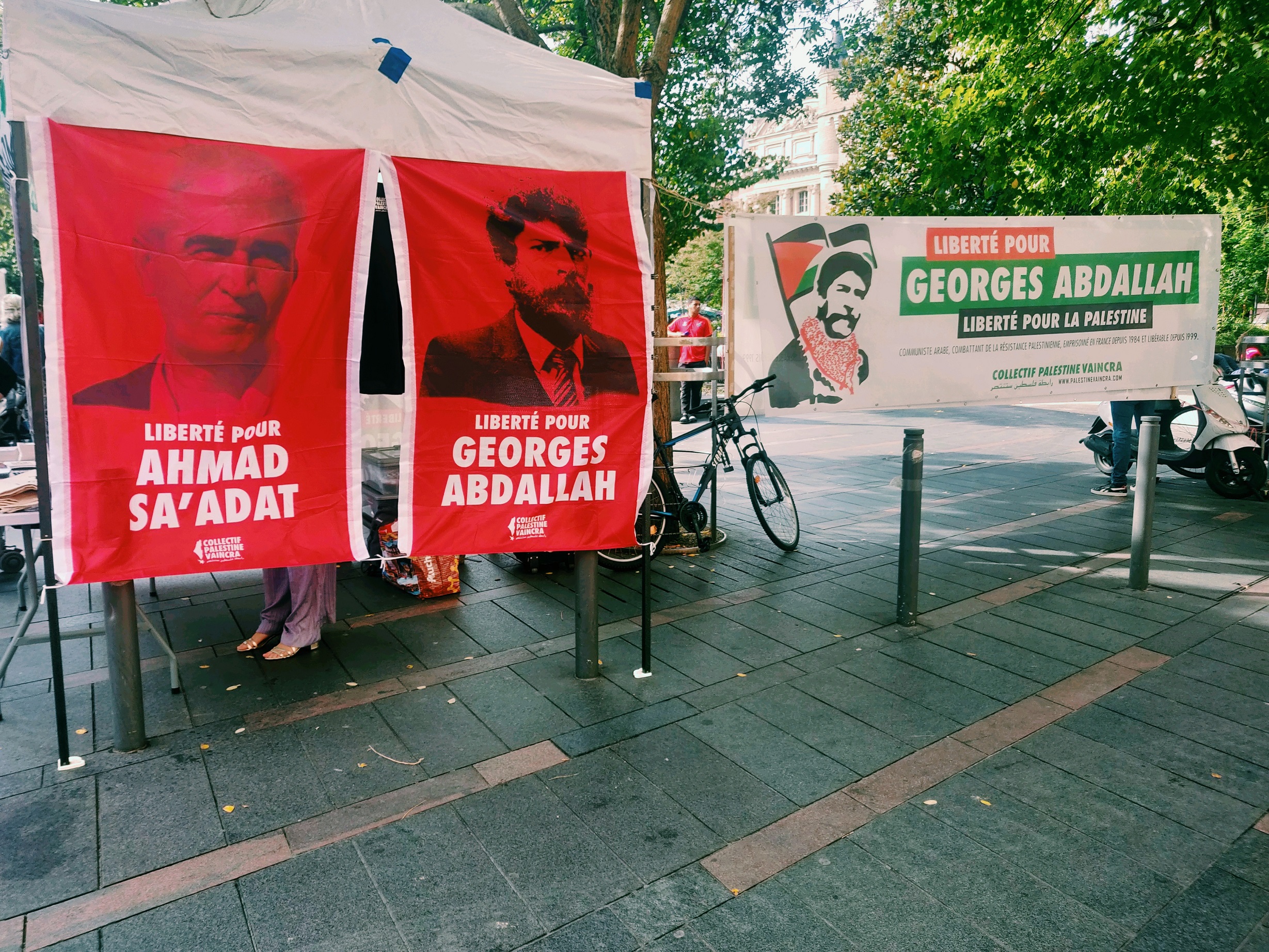 On Sunday, 26 September, the Collectif organized a Palestine picnic for social gathering and exploring Palestinian and Arab cuisine, while discussing the mobilization for Georges Abdallah and upcoming initiatives. A few days later, many posters demanding his release appeared in bus stops throughout the city, including in the Mirail and Bagatelle districts.

This was followed on 28 September by a stand at the University of Mirail, which received a warm welcome from many students in support of the Palestinian cause. Over 50 cards calling for Georges’ release were signed by students outraged by the ongoing imprisonment of this Lebanese Communist.

On several occasions, people distributed flyers in the city center of Toulouse, sparking dozens of discussions about Georges Abdallah and the urgent need for his release.

The mobilization for Georges’ release continues throughout October and will conclude with two important events:

The Collectif Palestine Vaincra organizes actions and initiatives in Toulouse to support the Palestinian people and their resistance for the liberation of Palestine from the river to the sea. Contact the Collectif to get involved, or reach out to Samidoun Network to get involved in your local area outside of France.