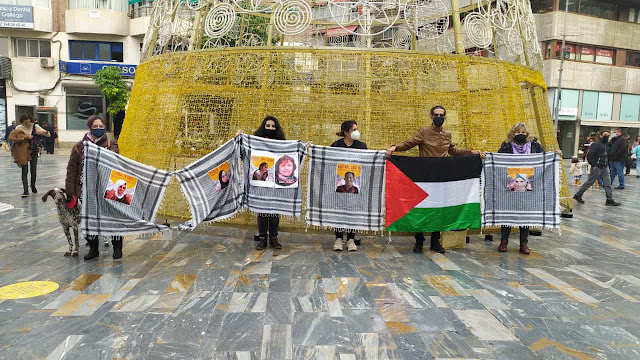 Palestina Libre Murcia — an affiliate of the Samidoun Network — organized a protest action in Murcia, Spain, on 24 December 2021 in support of Palestinian women prisoners struggling to defend their rights in Israeli occupation prisons.

At the demonstration, activists held the images of Palestinian women prisoners and issued a joint statement on behalf of Samidoun and Palestina Libre. The statement is below:

On Wednesday December 22,  Marah Bakir and Shorouq Dwayyat  were released from solitary confinement and returned to their cells in the Palestinian women’s section of Damon Prison.

Bakir and Dwayyat, elected representatives of the detained women, had been transferred out of Damon Prison and held in solitary confinement by the Israeli occupation forces in retaliation for their defense of the rights of Palestinian prisoners. This is a success for the resistance of Palestinian women and the Palestinian prisoner movement, achieved through struggle and action.

Of course, the fight is not over. Palestinian women remain deprived of family visits and other basic needs.

Bakir and Dwayyat, as well as their fellow prisoners, have been repeatedly attacked by repressive units that invaded their sections. Palestinian women political prisoners have been deprived of family visits for more than three months, subjected to security cameras in prison corridors and courtyards, and unsanitary and humid conditions in winter, without heating and with insufficient blankets. Prisoners, including  Israa Jaabis, who suffers from serious health problems and injuries, are denied adequate medical care. The repressive forces invaded the cells of the women and attacked them, cutting off the electricity.

The assault on the prisoners and the isolation of Bakir, Dwayyat and Qaadan provoked an outraged reaction from the Palestinian people, their resistance organizations and the prisoner movement. The prisoners closed their sections and returned their meals, while three prisoners –  Nurhan Awad, Maysoon Musa al-Jabali and Shatila Abu Ayada  – began a hunger strike that began on December 21 to demand the return of their female companions.

In all Israeli occupation prisons, Palestinian prisoners returned their meals Wednesday morning to demand that Bakir and Dwayyat be released from solitary confinement, and that Hisham Abu Hawash , who has been on a hunger strike for 128 days, be released from incarceration without charge or trial, and that attacks by repressive units against Palestinian prisoners in Nafha prison end. Palestinian resistance organizations have also declared their full support and willingness to mobilize to defend the prisoners.

Samidoun Palestinian Prisoner Solidarity Network and Palestina Libre stand in solidarity with Palestinian female prisoners and the Palestinian prisoner movement as a whole, as well as their continued resistance and leadership.

The return of Dwayyat and Bakir to their sections and the restoration of the prisoners’ membership is a material success that shows that the resistance of the prisoners wins. However, the fight is not over yet: we must obtain the demands of the prisoners and their release. We call on all international supporters of Palestine to act to support imprisoned Palestinian women in their fight for justice, until the liberation of Palestine from the river to the sea.