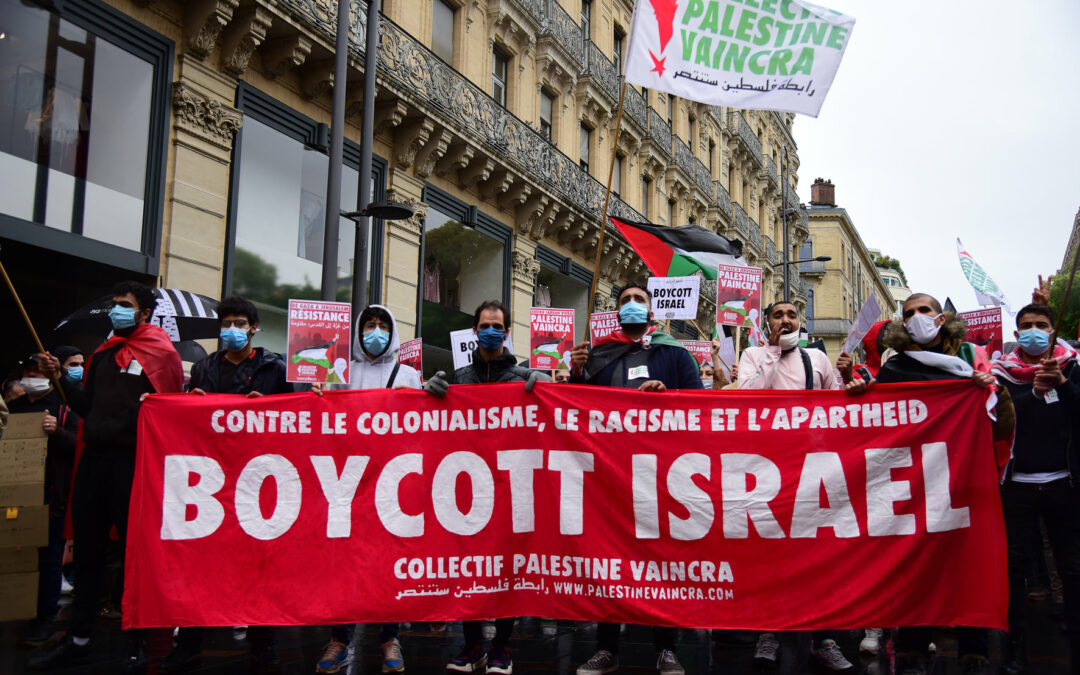 Samidoun Palestinian Prisoner Solidarity Network fully supports the following statement from the Collectif Palestine Vaincra, a member organization of the Samidoun Network. (Read the original in French). We are committed to confronting repression and attempted intimidation of the movement for justice and liberation in Palestine:

For several months, officials of B’nai B’rith and NGO Monitor (organizations close to the Israeli far right) have been waging a campaign on social networks in an attempt to intimidate the Collectif Palestine Vaincra. In recent days, these attacks have focused on the presence of a “boycott Israel” sticker on a sign advertising Israeli produce in an Auchan supermarket in Toulouse and a collage of posters at the University of Toulouse Jean Jaurès. 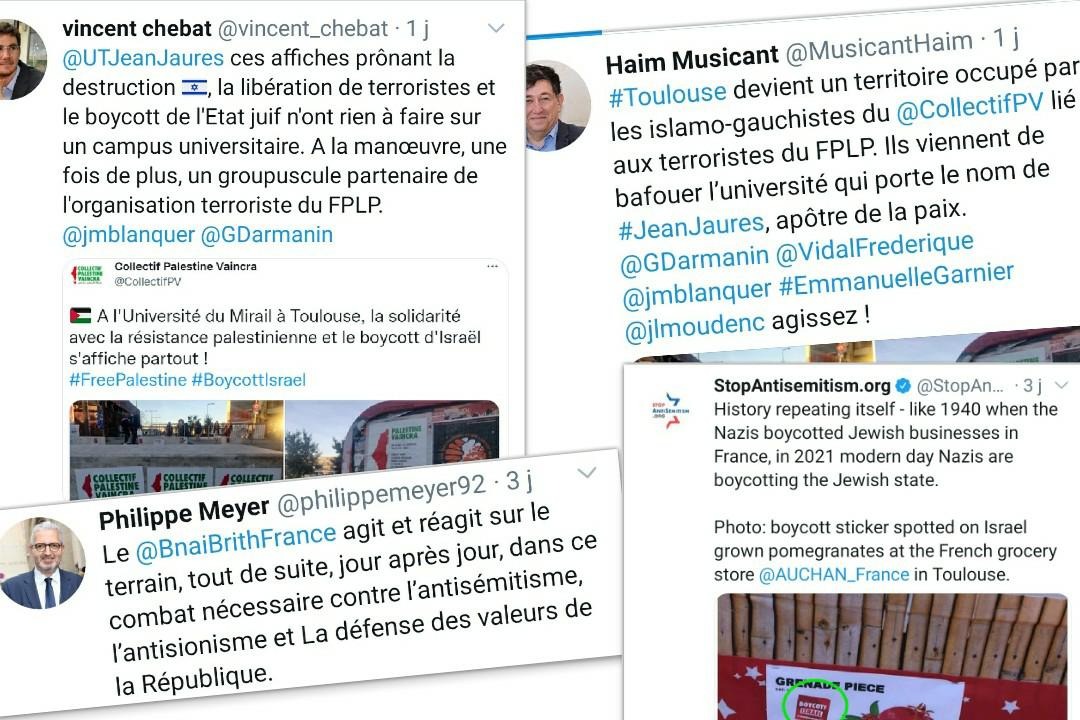 This ridiculous propaganda campaign has gained a platform since the Israeli channel I24news devoted no less than two debates on this subject in its program “Les Grandes Gueules du Moyen-Orient” (“The Big Mouths of the Middle East”) presented by Benjamin Pretover. Faithful to our anti-racist principles of boycotting Israel, its products and its institutions, the Collectif Palestine Vaincra declined for the second time an invitation to participate in this program on a television channel with an openly reactionary editorial line.

Giving credence to this trumped-up campaign, the Toulouse town hall sent Maxime Boyer, deputy mayor and vice-president of Toulouse Métropole, to participate in this media circus on the “Grandes Gueules du Moyen Orient” on I24news, with these words: “We condemn this collective and the many actions they have been carrying out for several months throughout the city, in the public domain, but also sometimes within universities or in other structures. » And Boyer continues by making a shameful comparison, associating the Collectif Palestine Vaincra with the attacks of Mohammed Merah. He continues with this announcement :“We are mobilizing, in connection in particular with the CRIF, the services of the State. We approached the Prefect and the Public Prosecutor so that everyone can assume their responsibilities. And that then there can be judicial processes which are implemented in order to restore the law”. He concluded by saying: “We call for the dissolution of all the structures which contravene the republican pact” .

In an attempt to discredit and stigmatize the movement for justice in Palestine, they lie shamelessly. For example, they claim that boycotting Israel is illegal in France. False! The European Court of Human Rights also condemned France in June 2020 for “hindering freedom of expression” following its convictions of activists from Mulhouse who had called for a boycott of Israeli products. Let us recall that the Collectif Palestine Vaincra organizes monthly information stands in Toulouse, in particular on the boycott of Israel.

In addition, the “Grandes Gueules du Moyen Orient” ranted about the support of the Collectif Palestine Vaincra for the Palestinian resistance in all its forms. Once again, this is an anti-colonialist principle recognized by the UN in its resolution 37/43 adopted in 1982, which affirms, among other things, “the legitimacy of the struggle of peoples for independence, territorial integrity, national unity and liberation from colonial domination, by all available means, including armed struggle.” Affirming our support for the resistance is therefore upholding a legitimate right, recognized even in international bodies.

The Collectif Palestine Vaincra denounces this new campaign of intimidation on the part of the supporters of Israeli apartheid, zealously relayed by the city hall of Toulouse which is infamous for its positions of defense of Israel and the shameful twinning with its capital Tel Aviv. It is unacceptable that the town hall of Toulouse is relaying and supporting a campaign which aims to silence an anti-colonialist voice. Beyond these attacks on the Collectif Palestine Vaincra, it is all collectives, associations, unions and anti-racist organizations that are targeted. We will not be intimidated. We will continue our activities and defend our right to freedom of demonstration and expression to defend the vision of a free and democratic Palestine for all, from the river to the sea.