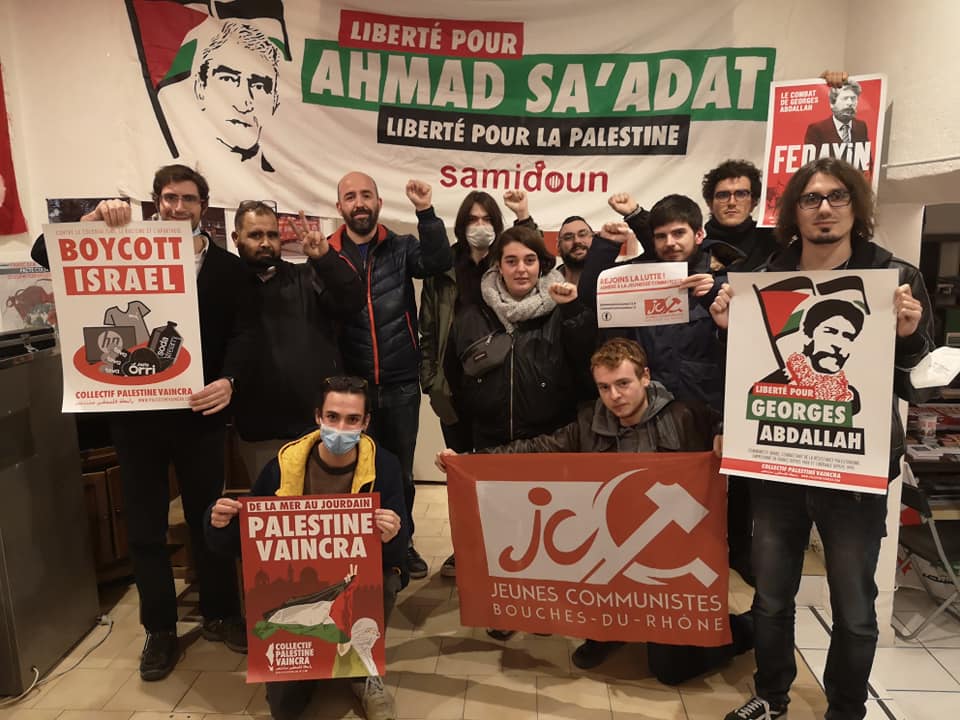 On Saturday, 22 January, the Jeunes Communistes 13 (Young Communists of Bouches-du-Rhone, France, with the central city of Marseille) organized a screening of “Fedayin: Georges Abdallah’s Fight” with a presentation by a member of the Collectif Palestine Vaincra, a member organization of the Samidoun Network that plays a leading role in organizing for the liberation of Georges Abdallah. This initiative took place within the framework of the International Week of Action to free Ahmad Sa’adat and all Palestinian prisoners. On this occasion, several dozen people took part in this event, held in the  premises of the Jeunes Communistes in the heart of downtown Marseille.

After the screening, the evening with discussion solidarity with Palestine and the anti-imperialist dimension of the Palestinian cause. Several trade unionists from the CGT underlined the importance of challenging and boycotting the Zionist trade union federation, the Histadrut, and calling on the trade union structures to take a stand on this matter. A representative of the CRI (Coordination Against Racism and Islamophobia), an anti-racist organization recently dissolved by an order of the government, stressed the importance of waging a common struggle against the repression targeting the Palestine solidarity movement. This initiative ended with a photo of solidarity by the JC organizing team and people in solidarity displaying posters calling for the release of Georges Abdallah, for the liberation of Palestine from the river to the sea, for the boycott of Israel, all under a banner by Samidoun calling for freedom for Ahmad Sa’adat, the imprisoned Palestinian leftist leader and General Secretary of the Popular Front for the Liberation of Palestine.

On Saturday, 29 January the JC 13 organized their annual event marking their commitment to a year of struggle and resistance in 2022. In a convivial gathering, different organizations participated in this collective sharing of experiences, including Ligne Rouge, the JC Alpes-Maritimes, the CGT and the Struggle Committee of the University of Aix en Provence. International organizations were also invited to share messages of solidarity, underlining the resolutely internationalist and anti-imperialist commitment of the JC.

Charlotte Kates, the international coordinator of Samidoun, sent a video message highlighting: “Today, Palestinian prisoners are not only on the front lines confronting Zionism, occupation and colonialism throughout occupied Palestine, they are also on the front lines confronting imperialism. We can see this in the case of Georges Abdallah as well as in that of Ahmad Sa’adat. Imperialist powers such as the United States, France and the United Kingdom participated in the imprisonment of Ahmad Sa’adat in a Palestinian Authority prison, then in his abduction to an Israeli occupation prison, just as France continues to imprison Georges Abdallah today with the full complicity of the United States and Israel. So when we fight for the freedom of Palestinian prisoners, we also fight together against imperialism, the main enemy facing the peoples of the world today.”

This ceremony ended with the reaffirmation of the commitment of the JC 13 in support of the Palestinian people by affirming: “The fight for a free Palestine from the river to the sea is a revolutionary, anti-imperialist fight. It is the legitimate struggle of a people deprived of its basic rights and its sovereignty over its own soil by colonialism and imperialism for more than a century.”

Samidoun salutes this necessary and important work by the JC 13. Let us continue to organize to ensure that our common, collective efforts will continue to strengthen solidarity with Palestine in France and internationally!