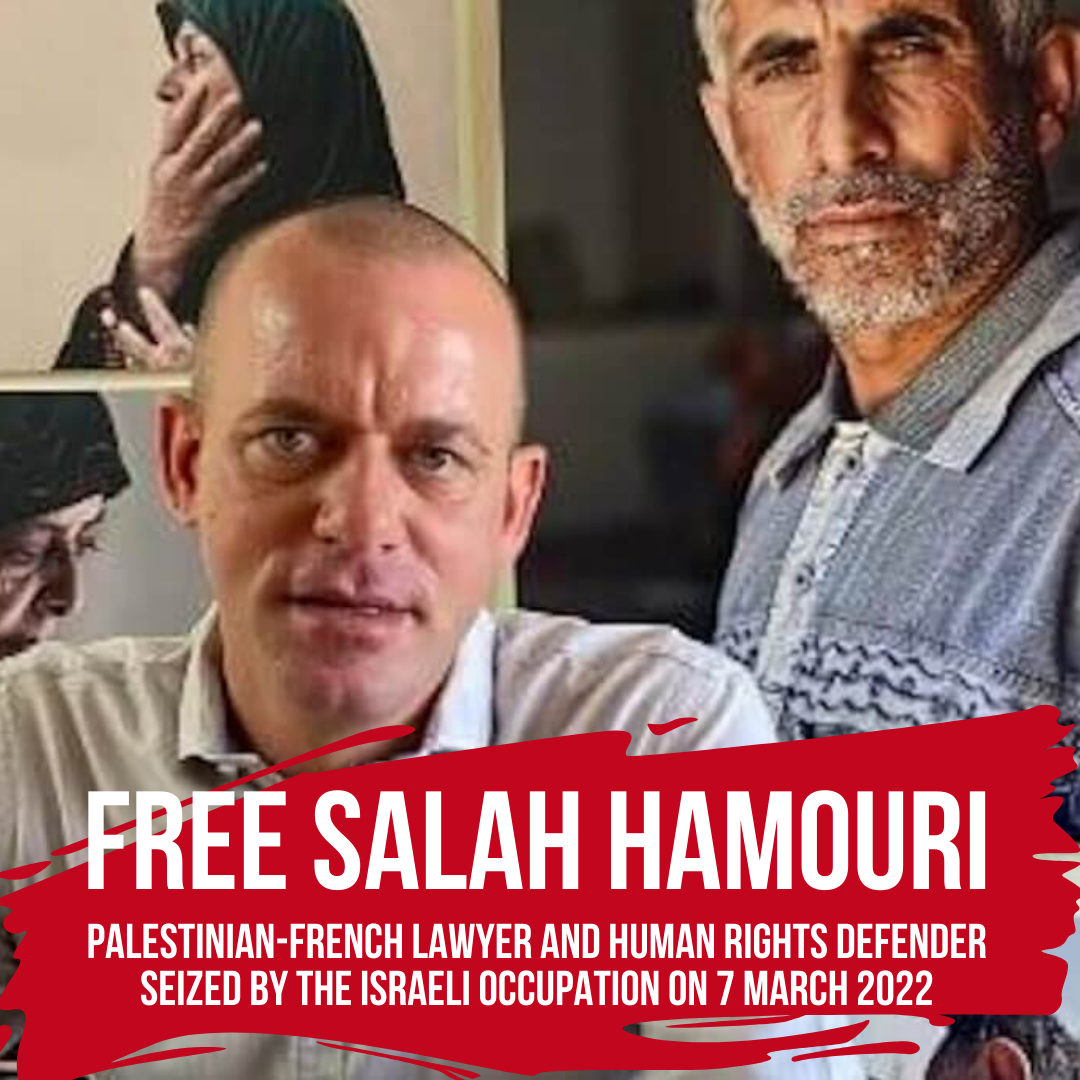 In the early morning hours of 7 March 2022, Israeli occupation forces stormed the Jerusalem home of French-Palestinian lawyer, human rights defender and former political prisoner Salah Hamouri, abducting him once again. Hamouri, who had published an article in English on his case in Jacobin magazine only one day before, is currently fighting against the attempt of the Israeli occupation to forcibly expel him from his home city of Jerusalem.

Over the years, Salah has been relentlessly targeted by Israeli occupation authorities, subjected to arbitrary arrests, administrative detention without charge or trial, exorbitant fines, travel bans against him and his family, the deportation of his wife and French national Elsa Lefort, and, most recently, the illegal revocation of his permanent residency and forced deportation from Jerusalem on 18 October 2021. Moreover, on 8 November 2021, a Front Line Defenders investigation conducted in collaboration with Citizen Lab and Amnesty International’s Security Lab found that Salah Hammouri had been one of six Palestinian HRDs hacked by Israeli NSO Group’s notorious Pegasus spyware.

Salah Hamouri is a French-Palestinian lawyer and a former Palestinian political prisoner whose case was widely known throughout France as a symbol of injustice and false allegations until his release in 2011 in the Wafa al-Ahrar prisoner exchange, only a few months before his sentence was to end. He has spoken throughout France and internationally at events like the World Social Forum on Palestinian prisoners and the struggle for freedom.

The Israeli occupation uses the forced revocation of residency for Palestinians from East Jerusalem as a means to displace Palestinians and forcibly create a “Jewish majority” in the occupied city as well as a means to silence Palestinian activists and organizers. As noted by Al-Haq, “Revocation of permanent residency status is the most direct tool used to forcibly transfer Palestinians from East Jerusalem. This policy which has been used by Israel more than 14,500 times between 1967 and 2015, and is illegal under international law.”

In Hamouri’s Jacobin article, he speaks about his current case resisting expulsion from Jerusalem:

Everything Israel’s apartheid regime has done is aimed at silencing me and encouraging me to give up and leave the country, as they do with any Palestinian who refuses to bow their head and submit to ethnic cleansing. Israeli authorities are creating a bespoke plan of harassment for each politically active person, arresting and harassing them, and where this doesn’t work, stripping them of their IDs or health insurance and targeting their family and businesses. They target those that speak out in order to weaken our collective resistance and to more easily expel us.

My own story demonstrates that the Israeli regime is absolutely ruthless, operating with a calculated cruelty that knows no limits. Our family’s enforced separation is intended to inflict suffering, to deny my children a father and the experiences and joys of growing up in their homeland with the love of my extended family. Interactions with my children are limited to stolen moments over video call, attempts to forge and maintain a connection despite the distance.

This isn’t what I want for my children. But it is better they know that I fought for justice rather than passively accepting ethnic cleansing, better that I do all I can to remain steadfast in our land than acquiesce to Israel’s harassment. I am continuing with my struggle because I want all Palestinians to live with freedom and dignity, and I know this will not come without a fight, without sacrifice on the part of those willing to take a stand.

Last year, Palestinians rose in the thousands to defend Jerusalem, sparking an uprising that spread throughout all Palestinians communities in rejection of Israeli colonization. A new generation repeated its commitment to carry forward the struggle for justice, for liberation and for the rights of Palestinian refugees living for decades in exile. As our people have not given up, neither can I, and neither can the millions around the world who support Palestine, and whose commitment to our cause is more important now than ever before.

During his previous imprisonment, Hamouri’s case won wide support among French popular movements and even elected officials, with over 1,000 signing a call for his release. Nevertheless, French official diplomacy continued to drag its feet rather than defend its citizen, inaugurating the “France-Israel season” while Israel imprisoned a French citizen without charge or trial.

Now, France continues to imprison Georges Abdallah for over 37 years; French prime minister Jean Castex recently declared Jerusalem “the eternal capital of the Jewish people” despite the government’s claimed commitment to support Salah Hamouri’s right to Jerusalem; and, urgently, the government has announced it plans to dissolve and ban two organizations advocating for justice in Palestine, including the Collectif Palestine Vaincra.

The French state will not act to defend their citizen Salah Hamouri without significant public pressure. We are relaying the action call of the Committee to support Salah Hamouri:

If you are in France or a French citizen, contact the Ministry of Foreign Affairs and your Members of Parliament to demand action.

If you are outside France and an international supporter, contact the addresses above or the French consulate or embassy in your area. https://www.embassypages.com/france

The following letter is suggested:

Dear President of the Republic of France,
or Dear Minister of Foreign Affairs,
or Dear Consul,

On March 7, 2022, our compatriot [or, French citizen, for non-French writers], the Franco-Palestinian lawyer, human rights defender, Salah Hamouri, was arrested at dawn, at his home in East Jerusalem by the Israeli occupation army.

The military authorities gave no reason for this arrest.

I ask you to work on behalf of France for the immediate release of Salah Hamouri.