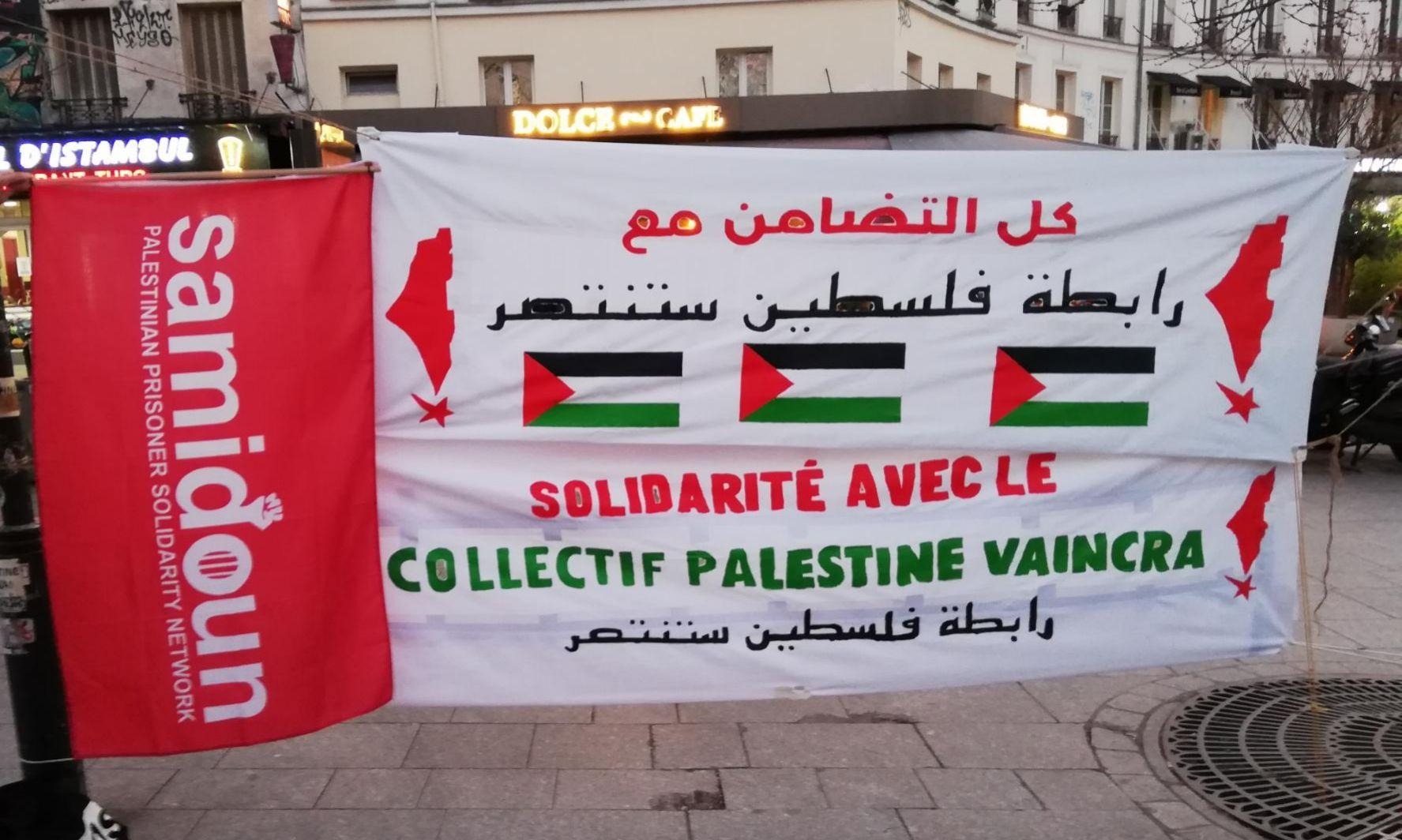 French president Emmanuel Macron, only weeks after ordering the dissolution — effectively, the ban — of two Palestine solidarity organizations, the Collectif Palestine Vaincra and Comite Action Palestine — met with Isaac Herzog, president of the Israeli apartheid regime on Sunday, 20 March. Despite the fact that French-Palestinian citizen, lawyer and human rights defender Salah Hamouri is currently imprisoned by Israel under a three-month “adminnistrative detention” order — that is, imprisonment without charge or trial — Macron chose instead to attack anti-Zionist activists and boast about his censorship of pro-Palestinian, anti-racist voices in France.

Speaking in Toulouse alongside Herzog, Macron declared that “anti-Semitism and anti-Zionism are enemies of the Republic,” once again equating racism with anti-racism, and Palestinian liberation with European fascism. Further, he specifically boasted of the dissolution of the Collectif Palestine Vaincra:

“So, I want to thank you Mr. President, dear Isaac for having responded to my invitation, for being here today with your wife by our side…We are here … to remind together that France and Israel, Israel and France are together determined to defeat terrorism in all its forms and on all fronts, and together we are determined to annihilate anti-Semitism, including that which hides under the mask of anti-Zionism. This is why at the end of 2019, the French Parliament has adopted the definition of anti-Semitism of the International Holocaust Remembrance Alliance (IHRA). This is why, on March 9, the Council of Ministers pronounced the dissolution of two anti-Semitic collectives, including the Toulouse-based Collectif “Palestine Vaincra.”…. anti-Semitism and anti-Zionism are the enemies of our Republic.”

Macron’s language repeatedly equates Jewish people in France with the state of Israel, while disparaging advocates for justice in Palestine whose work has constantly been characterized and motivated by anti-colonialism and anti-racism. Indeed, the French state’s own allegations against the Collectif never even accuse the Collectif or its members of saying anything defamatory or racist against Jews; instead, the French state “accuses” the Collectif of supporting the boycott of Israel, defending Palestinian resistance, and opposing Zionism.

Meanwhile, Salah Hamouri is locked behind Israeli bars with no charge and no trial against him, while he is fighting for the very right to live in his home city, Jerusalem. Like other Jerusalemites, he is being targeted in the systematic ethnic cleansing of Jerusalem; the Israeli regime has announced that it plans to strip him of his residency. While French officials have declared that Hamouri has the right to live in Jerusalem, Macron took the opportunity not to advocate for a French-Palestinian citizen illegally detained and under threat of expulsion but to instead boast of silencing Palestine solidarity organizing in France.

In addition, two days prior, the French state announced its intention to continue the wave of dissolution orders targeting free expression, not only for Palestine organizing, but for anti-racist/anti-Islamophobia organizations and also for anti-fascist groups — those who are willing to confront actually anti-Semitic Nazi and fascist groups. The Antifascist Group of Lyon and Surroundings was informed on 17 March that a procedure to dissolve their work had begun, after originally being threatened with dissolution in December 2021.

In Toulouse, many marchers participating in the rally against racism on 19 March spoke out against the dissolutions as part and parcel of France’s state racist and colonial policies.

Speakers discussed the formation of a broad committee to combat the dissolution of the Collectif Palestine Vaincra, involving trade unionists, anti-fascist organizers, student groups, Palestine solidarity activists, community activists, anti-racist organizers and progressive and leftist parties, that will soon announce an international week of solidarity (read the text of the intervention below announcing this committee in Toulouse.)

In Auxerre, AFPS 89 spoke at the rally against apartheid and for peace, denouncing the dissolution of the Collectif Palestine Vaincra and the Comite Action Palestine.

As Macron and the French state escalate their attacks on popular movements for liberation and the Palestinian people, actions in defense of the targeted movements and in support of Palestine continue to spread. Actions in New York, Geneva, Frankfurt, Berlin, Charleroi, Belgium, Stockholm, Naples and many other cities have highlighted the dissolutions to demand an end to French state repression in just the past several days.

Robert Abdallah, the brother of Georges Abdallah, spoke out denouncing Macron’s imperial arrogance in dissolving the Collectif Palestine Vaincra, which has worked tirelessly to free his imprisoned brother, a Lebanese Arab Communist struggler for Palestine imprisoned in France for over 37 years.

Speech on the formation of the committee to defend the Collectif Palestine Vaincra from dissolution:

On March 9, the government decided on the final administrative dissolution of the Collectif Palestine Vaincra and another pro-Palestinian organization. The reasons given are purely political.

Today, this Toulouse anti-racist collective, fighting for equal rights and against the colonization of Palestine, has been officially silenced by the French authorities.
For three years, the Collectif Palestine Vaincra has developed anti-racist and anti-colonialist work in support of the Palestinian people.

This dissolution is a new step in the authoritarian, anti-freedom actions of the French government.

Previously, several Muslim and anti-racist associations were dissolved. Today it is the movement of solidarity with Palestine which is attacked, but also the trade union Sud Éducation 93 and the Anti-Fascist Group of Lyon and Surroundings (GALE) which are targeted by dissolution procedures and threats.