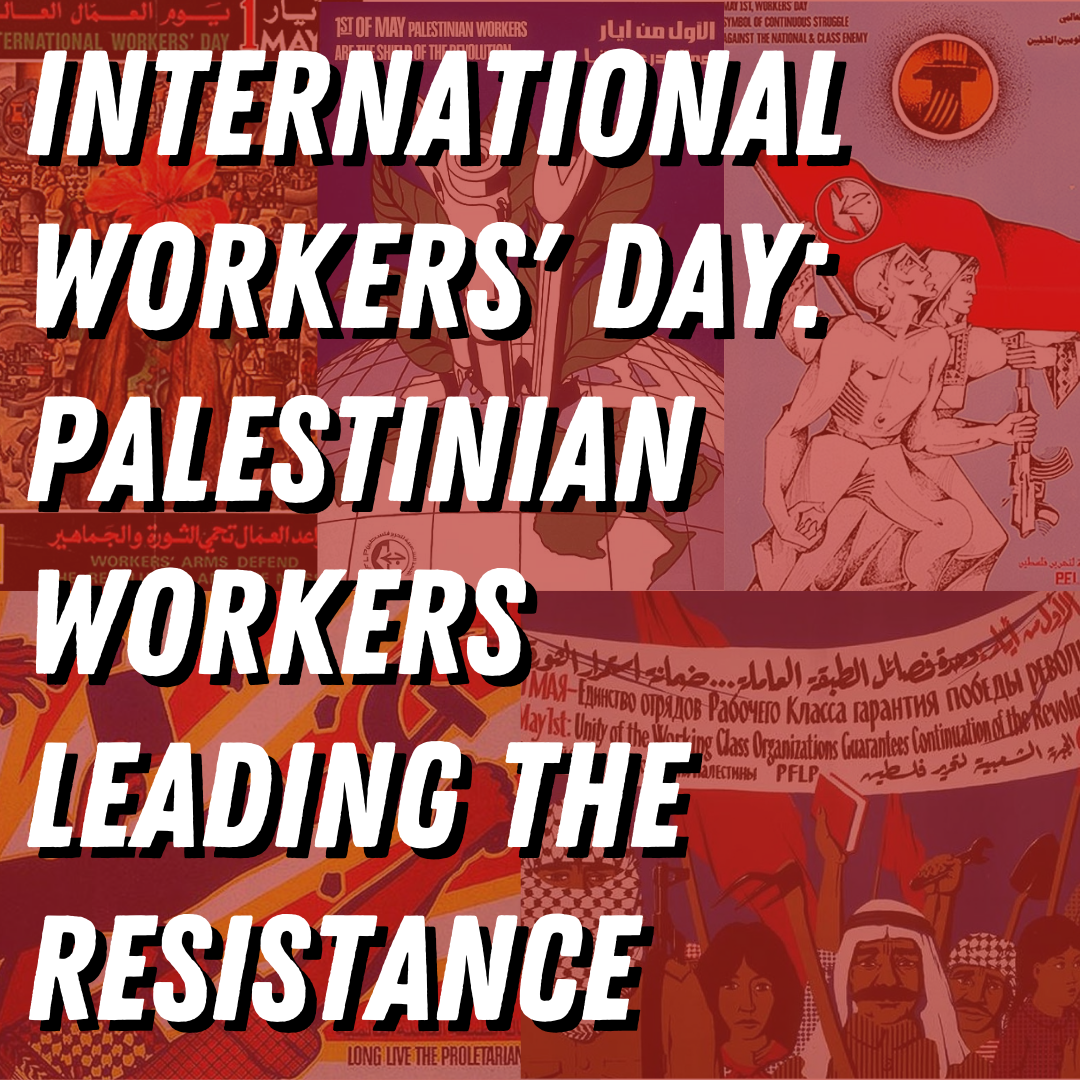 “The imperialist-Zionist-[reactionary Arab regime] alliance safeguards not only the imperialist interests, but the Zionist interests and the interests of the ruling reactionary bourgeois class in the area as well. We must build the alliance of the workers and peasants, Palestinian, Lebanese, Syrian, Arab, Middle Eastern, and internationally, that destroys this alliance. We are one hundred percent capable of that, and the movement of history points in this direction….Let us struggle to increase the role of the working class and the real proletarian leadership, not the vanguard that, once in leadership, tails the bourgeoisie and forgets its masses. We want the leadership that remains among the workers and the peasants and lives as they live and raises their voices, carrying their pains!” – George Habash, Palestinian revolutionary and founder of the Popular Front for the Liberation of Palestine, May 1980

On International Workers’ Day 2022, Samidoun Palestinian Prisoner Solidarity Network reiterates our solidarity with the working class and popular masses of Palestine and the world. 1 May is an international day of struggle for liberation from capitalism, exploitation, racism, imperialism and Zionism. Everywhere our chapters and affiliates are located, we are taking to the streets with our comrades to advance our collective struggles for liberation.

(We have revised and updated the following text for International Workers’ Day 2022. All images are classic posters of the Palestinian revolution via the Palestine Poster Project.)

Palestinian workers and the popular classes have always played the key, leading role as the force of the Palestinian liberation movement, inside and outside Palestine. The prisoners’ movement is no exception; indeed, the vast majority of Palestinian prisoners come from the working and popular classes, the refugee camps and the villages, and it is these workers who put their bodies and lives on the line for freedom. 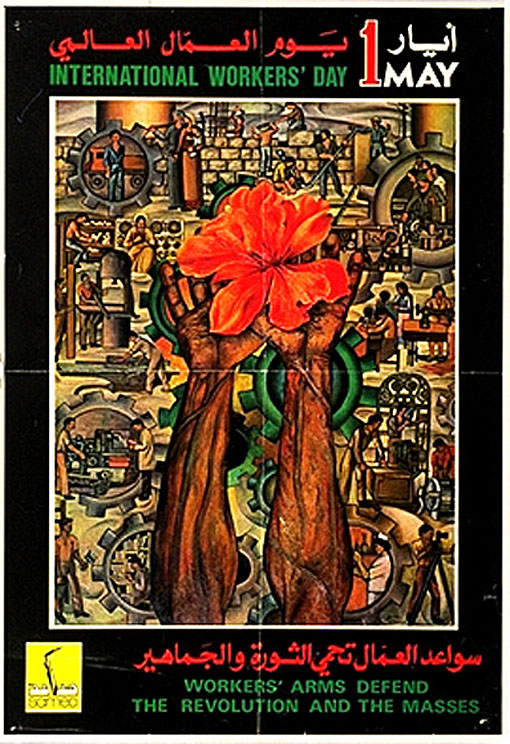 Palestinian workers: A history of leadership in struggle

Palestinians have engaged in labor organizing from the early days of the 20th century, organizing unions, defending their work against Zionist attempts to exclude Palestinian labor from Palestinian land, and taking action to defend their rights as workers and as indigenous Palestinians.

In the 1950s, Palestinian labor organizers in occupied Palestine ’48 were jailed as they attempted to keep their organizations intact under martial law. At least seven Palestinian trade union leaders were deported from the West Bank between 1969 and 1979. These attacks happened as Palestinians inside Israeli jails fought to end forced labor, a victory that was achieved only through great sacrifice. Omar Shalabi, a Syrian prisoner, was killed under torture in October 1973 during the protests against Israeli forced labor. 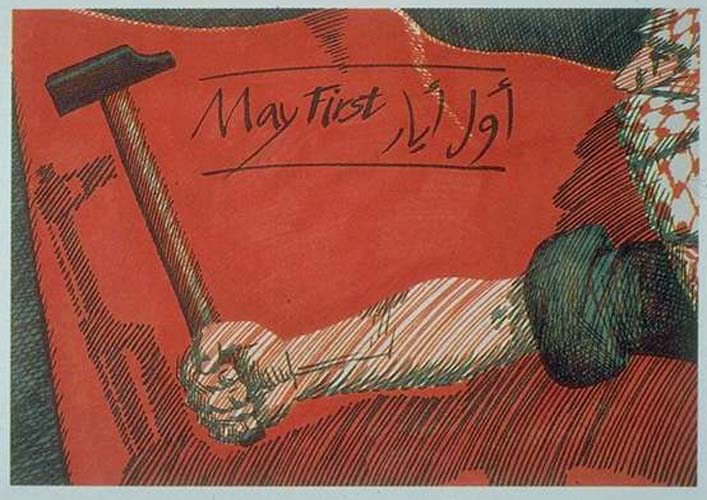 Targeting and imprisonment of Palestinian workers

Palestinian workers are regularly subject to colonial forms of imprisonment, from the political targeting of workers’ organizations to the mass criminalization of Palestinians seeking employment inside occupied Palestine ’48. Palestinian workers are frequently arrested for “entering Israel without a permit,” despite the fact that many of these same workers are Palestinian refugees denied their right to return to their original homes and lands for the past 74 years. The systematic siege and subjugation of the Palestinian economy, from the texts of the Paris Protocols to the latest normalization agreements promoted by U.S. imperialism through their sponsorship of reactionary Arab regimes, has forced thousands of Palestinians to seek work with or without permits as day laborers, often in construction.

At any given time, there are approximately 1000 Palestinians arrested, detained or fined for seeking to work in their own homeland; they are not classified in the Israeli colonial system as “security” prisoners and are thus missing from the statistics related to Palestinian political prisoners in Israeli jails. However, it is clear that everything about these workers’ situation is deeply political – they are imprisoned for their Palestinian existence on Palestinian land, specifically as Palestinian workers.

Palestinian workers are subjected to ongoing abuse at checkpoints, systemic discrimination on the job from the river to the sea, and economic isolation, starvation and siege meant to compel workers into becoming construction workers and servants in illegal settlements. The siege on Gaza is yet another attack on Palestinian workers. There are officially 372,000 people unemployed in Palestine, and the Gaza Strip has the highest levels of unemployment in Palestine due to the deliberate targeting of the Palestinian economy and its productive basis, including workers, fishers and farmers.

There are currently over 4,500 Palestinian political prisoners jailed by the Zionist regime, including over 600 jailed without charge or trial under administrative detention. The administrative detainees are currently engaged in a complete boycott of the occupation military courts, since 1 January 2022, and two — Khalil Awawdeh and Raed Rayan — are on hunger strike, their lives on the line for freedom. The Palestinian prisoners are on the front lines of Palestinian resistance on a daily basis. They are leaders in the Palestinian, Arab and international camp of resistance — and like the freedom fighters and martyrs of Palestine, they represent the workers and popular classes of Palestine, those who face multiple forms of exploitation and oppression at the hands of the Zionist regime. Freedom for Palestinian prisoners is essential to the liberation of the Palestinian working class and popular masses — the central feature of the liberation of Palestine from imperialism and Zionism, from the river to the sea. 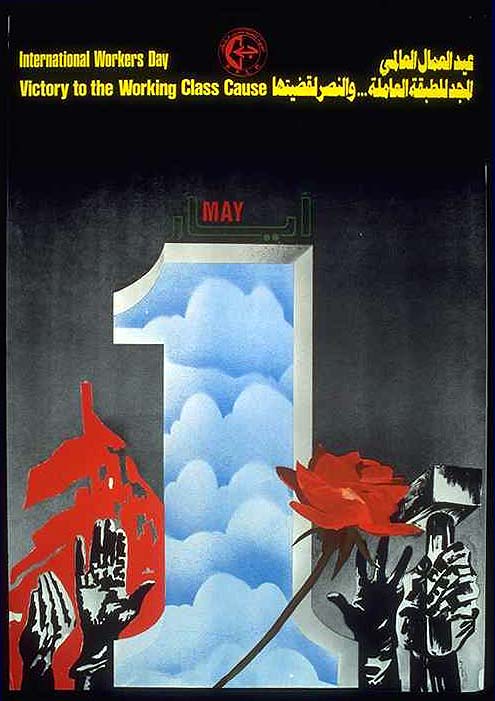 The Histadrut: A colonialist entity that must be boycotted

The drive to exclude Palestinian workers has always been part of the Zionist colonial project. This has been reflected in the founding principles and continued operation of the Israeli Histadrut, a trade union federation founded with the explicit purpose of promoting Zionist colonization of Palestinian land and excluding Palestinian labor. Despite having a fraternal relationship with the AFL-CIO and other major labor unions worldwide, it actually exploits Palestinian workers inside Israel by deducting fees from their salaries while denying them benefits. Its role predates the Nakba and continues to reflect this colonial relationship, which is why Palestinian workers and labor union solidarity activists have urged a boycott of the Histadrut by international labor federations. 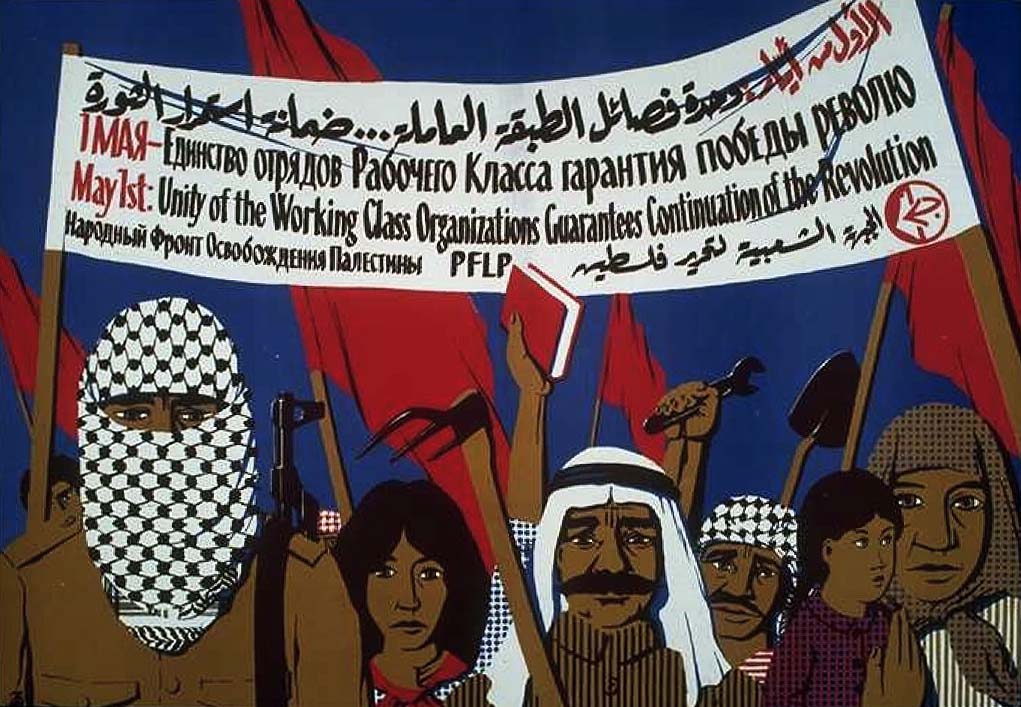 Palestinian workers in exile and diaspora fight back

Palestinian workers in exile also continue to struggle against exploitation and oppression. In Lebanon, amid the economic crisis and the targeting of Lebanon by imperialist powers and financial exploiters, Palestinian refugees continue to be denied access to numerous professions, leading to massive unemployment and frequent despair among the working class. Palestinian refugees forced to flee to Europe, North America and elsewhere from Lebanon, Syria and occupied Palestine confront racist, repressive policies that inhibit their right to work and threaten them with deportation, detention and exclusion.

They confront the racism of “Fortress Europe” and criminalization of refugee workers alongside fellow migrants and workers seeking safety and refuge from the military, social, environmental and economic disasters forced upon their home countries by the very imperialist states that then deny their rights. They face severe exploitation in black market labor. Still, these workers continue to struggle despite all odds not only to confront racism and exclusion in the imperialist countries but also to organize to confront imperialism and win their liberation. Palestinian workers are marching in, leading and organizing the demonstrations that took massively to the streets of the world during the 2021 Unity Uprising and the battle of Seif al-Quds, and are the first to be targeted for these actions by police and state repression. Inside and outside Palestine, the workers and popular masses are protecting Palestine and pushing the struggle forward, without compromise. 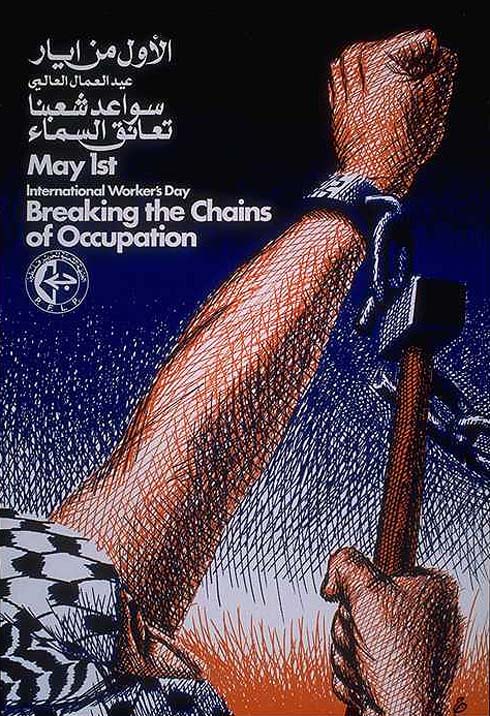 Israeli occupation and oppression reflects the sharpest edge of capitalist exploitation for the Palestinian working class, backed up fully by the most powerful and dangerous imperialist powers, especially the United States. However, they also face Arab reactionary regimes that are complicit with the exploitation and marginalization of Palestinian workers even as they pursue normalization with the Israeli state. Palestinian workers are exploited by the ruling class of these states directly in exile and diaspora as well as through their direct engagement with and promotion of the colonial economy of Zionism.

Imperialism is on the attack around the world, using its military might and its weapons of siege and sanctions against peoples around the world. As always, it is workers and the impoverished classes who bear the heaviest brunt of these assaults. Fighting back against imperialism, including U.S., Canadian and EU sanctions on Venezuela, Cuba, Iran, Syria and indeed, nearly one-third of the world, in addition to its military interventions, warmongering and ongoing violent attacks on all forms of resistance to imperial domination, is essential to building the movement for Palestine. 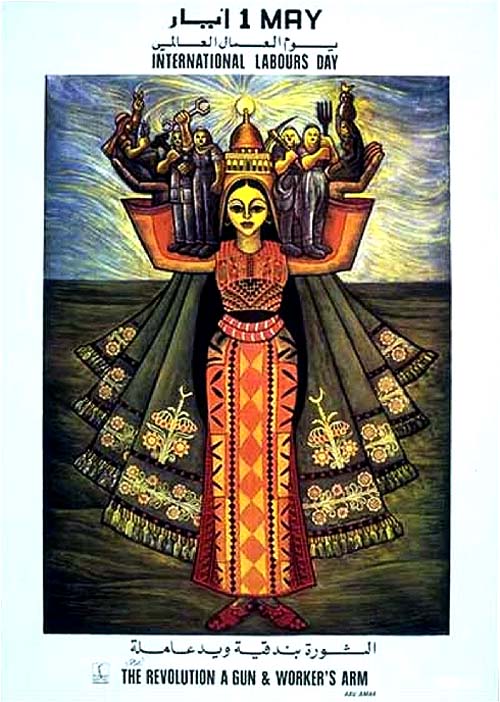 A call to the workers’ movements of the world

On International Workers’ Day, we once again amplify the words of Kamil Abu Hanish, speaking from Israeli prison, urging the escalation of the boycott of Israel: “Today, we call upon you, the fighters for freedom and justice in the world, the workers’ movements, the strugglers for socialism, the movements of revolution, to escalate your support for our struggle, for the Palestinian people and for the Palestinian prisoners. We urge you to act to isolate the occupation state, to hold it accountable for 70 years of crimes against the Palestinian people…The workers’ movements, the movements of the popular classes, the movements of the oppressed, can and must take part in this battle around the world, as part and parcel of the struggle against racism, imperialism and capitalism.”

Labor unions continue to escalate their support for justice in Palestine and the boycott of the occupation, including the  Canadian Union of Postal Workers, the Congress of South African Trade Unions, the National Union of Teachers, Public Services International, the Norwegian Confederation of Trade Unions (LO), the Quebec Confédération des syndicats nationaux, the United Electrical Workers union, the Scottish Trade Union Congress and more labor organizations in Ireland, the Philippines, India, France, Sweden, Belgium, Basque Country, Spain, Galicia, Brazil and more. International workers’ solidarity with Palestine has a long and proud history, including the leading role of Black and Arab autoworkers who struck in 1973 in Detroit against their union’s purchase of Israel Bonds to today’s Block the Boat campaigns, stopping ZIM ships from docking at ports globally.

We urge workers’ organizations around the world to continue to build and grow this solidarity with Palestinian workers, the leaders of the Palestinian liberation struggle, including immediately implementing the boycott and isolation of the Histadrut and a boycott of Israeli bonds and all investments in the colonial apartheid regime. Campaigns like Block the Boat illustrate the power of organized workers, the Palestinian community and people of conscience in dealing a material blow to the economy of colonialism and exploitation, and can and must be expanded.

We also express our solidarity with the struggling workers of the world, including the imprisoned labor union and workers’ movement leaders who are held behind bars or face death threats and repression for their role in defending oppressed workers. From India to the Philippines to France, from Colombia to Egypt to Turkey and Morocco, we stand with these labor movements targeted for repression. The liberation of Palestine is fundamentally linked to the liberation of all from imperialism, exploitation and capitalism.

On International Workers’ Day, these struggles must become an occasion to escalate our work to support Palestinian workers, free the prisoners, and liberate Palestine, from the river to the sea. 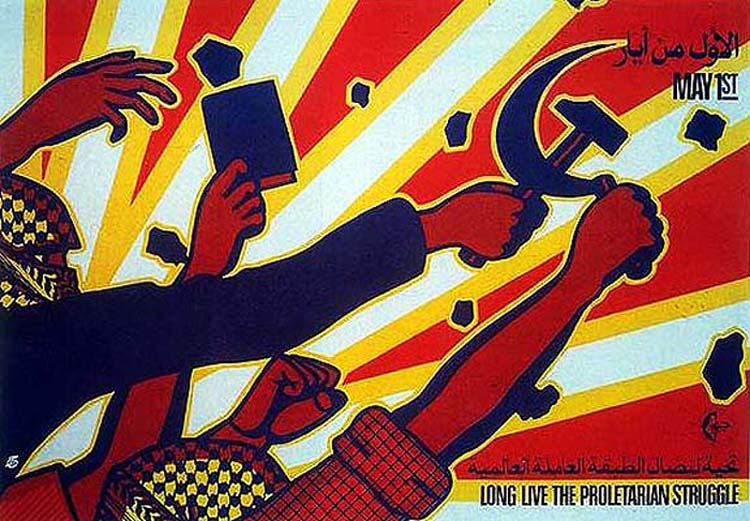