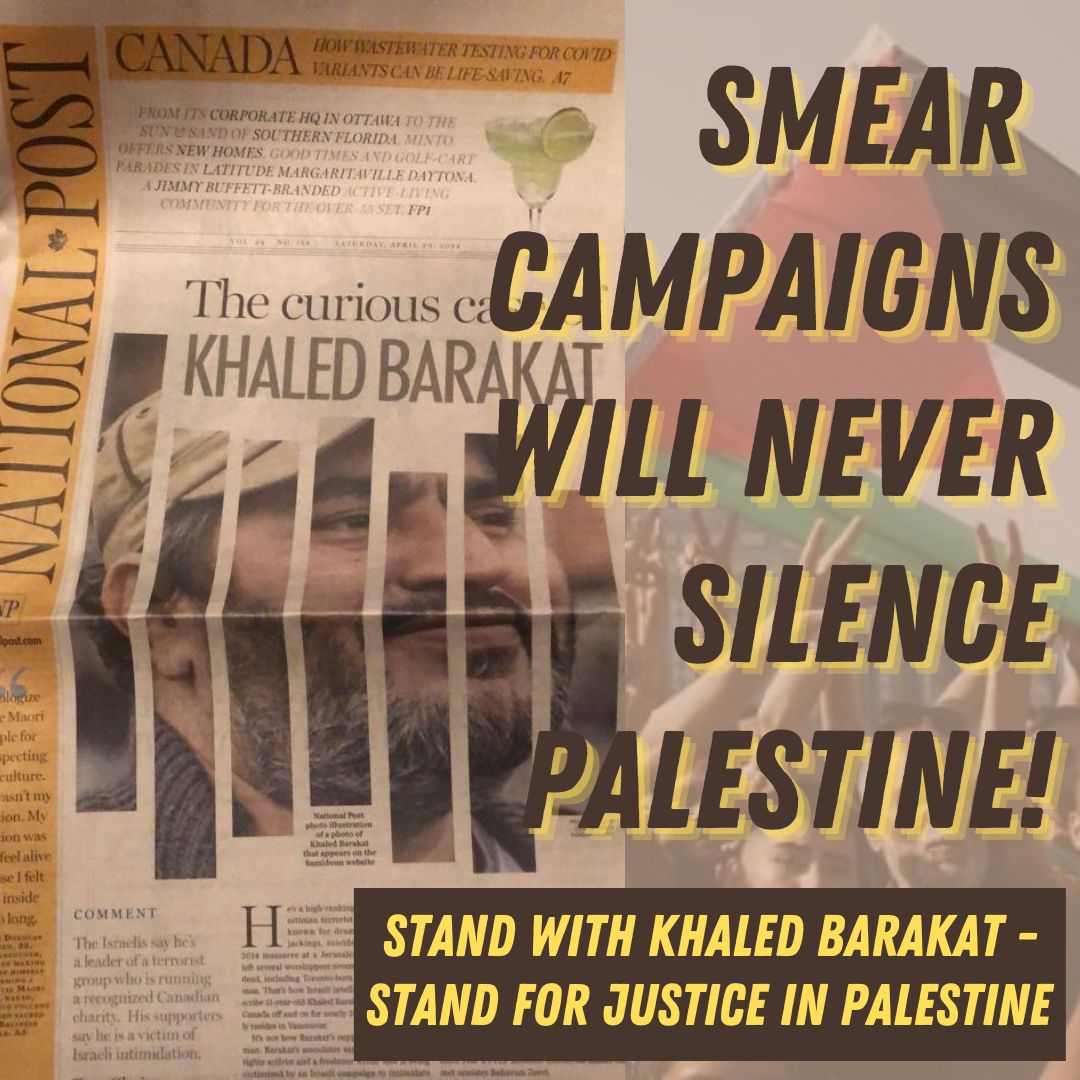 Samidoun Palestinian Prisoner Solidarity Network condemns in the strongest terms the smear campaign targeting Palestinian Canadian leftist writer and community organizer Khaled Barakat as well as the work of Samidoun, by the right-wing National Post, intentionally forwarding the agenda of pro-Israel lobby organizations in Canada. It is clear that this is not a random attack; the content, far from its packaging, is in reality warmed-over retreads of various attacks from the Israeli occupation regime and Zionist publications over the years, with an added attempt to sensationally criminalize and stigmatize Palestinian organizing and activism in Canada.

Let us be clear. We will not be deterred by Israeli’s designations or by smear campaigns such as this. We stand with Khaled Barakat. We stand with the Palestinian people, their resistance, and their 4,500 Palestinian prisoners, leaders of the resistance and of the movement for justice and liberation in Palestine, from the river to the sea.

The front-page placement of the article coincided with multiple Israeli-government-backed campaigns internationally targeting Palestinian community and Palestine solidarity organizing. It is clear that this reflects these forces’ growing anguish and concern about the reality that the majority of people around the world, and even inside countries like Canada and the U.S., where governments provide the Israeli occupation with significant military, diplomatic and political support, stand with the Palestinian people and their efforts to throw off colonialism, occupation and apartheid.

Why did the National Post publish this article? Of course, the National Post has never hesitated to engage in right-wing, pro-imperialist and anti-Palestinian argumentation and attacks. Most recently, in the past two months, four major Canadian university student bodies and/or student governments have passed new resolutions and policies in support of Palestinian rights and implementing boycott, divestment and sanctions policies against the Israeli occupation: at McGill, Concordia, University of British Columbia and Simon Fraser University. This comes in addition to multiple resolutions that have been adopted over the years by Canadian labour unions, student unions and student bodies, and even the limited resolutions adopted by the federal New Democratic Party (NDP).

In May 2021, during the Unity Uprising in Palestine, tens of thousands of people took to the streets in cities and small towns across Canada, as they did around the world. At the same time that the Palestinian people’s resistance on the ground in Palestine was making clear that the occupation would not be able to freely commit its ongoing war crimes and crimes against humanity, people here were taking action to demand a change in Canadian policy and an end to complicity in these crimes — along with accountability and real justice for Indigenous peoples of this land.

It’s quite clear: Israeli colonization, occupation and apartheid are losing ground. Major human rights and legal institutions have spoken out, from Human Rights Watch to Amnesty International to the Harvard University Law School legal clinic to the United Nations’ ESCWA. Millions of people are taking to the streets for justice in Palestine. The Palestinian resistance is perhaps stronger than ever before, amid a growing resistance camp in the region and internationally.

The response of the occupation has been to escalate their use of the “terrorist” label to the extent that international advocacy groups like Samidoun, Palestinian community organizations in Europe, and six major Palestinian NGOs like Addameer, Defense for Children International and Al-Haq, are currently being labeled as “terrorist” by the Israeli occupation regime. Israeli president Isaac Herzog has even labeled an ice cream brand not selling in illegal settlements “a new form of terrorism.”

This has been combined with efforts pushed by various official entities, including Israeli intelligence, the “Ministry of Strategic Affairs,” the Ministry of Foreign Affairs, etc, with the marketing of “dossiers” so thinly evidenced that even Western governments have found them lacking (yet appear to be relied upon in the National Post report). The attempt to silence advocacy for Palestine by using the “terror” label is failing. In fact, Samidoun has grown more since our designation in one year than in any single year prior.

In France, where exactly these same types of smears were used to push for the French government to ban the Collectif Palestine Vaincra and other pro-Palestine associations, the French government has already lost the first legal challenge — not only is the Collectif once again actively marching for Palestine, but the government was required to pay 4500 EUR for the violation of its rights. A German court found in March of this year that it was illegal for Berlin’s interior minister to ban Khaled Barakat’s speech on U.S. foreign policy, Palestine and the Arab countries. Nevertheless, we see the National Post, working hand in hand with expressly Zionist organizations, in an attempt to push the Canadian government down a similar failed path of criminalization through an astroturfed campaign of smears and attacks.

As Samidoun, we know first and foremost that attacks on us are primarily aimed at the Palestinian prisoners, seeking to isolate them from international solidarity and support. As we write today, there are 4,500 Palestinians jailed in occupation prisons. Of those, over 500 are jailed without charge or trial under administrative detention. They have been engaged in a boycott of the military courts since the 1st of January 2022. Two are currently on hunger strike to end their arbitrary detention, Khalil Awawdeh and Raed Rayan. They are joined by hundreds of Palestinian children locked behind bars. Every one of those Palestinian prisoners deserves front-page coverage in Canadian mainstream media — not a smear campaign, but a real look at their suffering and steadfastness and the injustice against them, which is enabled by the complicity of governments like Canada’s. While the National Post can find plenty of column inches and front-page space to smear Palestinians in diaspora, Canadian journalists face silencing and have apologized for so much as mentioning the word “Palestine.”

Further, this is clearly an attack on Palestinians organizing in exile and diaspora. The Israeli colonial regime has already forced Palestinians from their homes and lands for over 74 years of Nakba, denying their inalienable right to return, and yet, is unable to throw these Palestinians in Canada, the U.S., Europe, Latin America and elsewhere in administrative detention or invade their homes in midnight raids. Its inability to do so is apparently frustrating, especially as new generations of Palestinians come forward to lead the struggle inside and outside Palestine; this type of smear campaign is a transparent attempt to silence the voice of the Palestinian people in exile and specifically the Palestinian-Canadian community.

We also see these campaigns as an attempt to undermine our collective solidarity through the targeting of individuals and specific organizations and to police the movement, as well as to instrumentalize and deploy anti-Palestinian racism and incite state and individual violence against Khaled Barakat and other Palestinian activists. These attacks underline more than ever the importance of a collective defense of all of us against the perpetrators and promoters of colonialism, imperialism and racism. This is not a lone example; far from it — it reflects the attacks on Prof. Rabab Abdulhadi in the United States, hundreds of mostly Palestinian and Arab Canadian and American students profiled on smear websites like Canary Mission, educators like Javier Davila and Nadia Shoufani, or restaurants like Foodbenders in Toronto.

Similarly, we note that this front-page National Post smear campaign comes one day before the ADL in the United States announced an escalation in its decades-long campaigns attacking organizations advocating for justice in Palestine. It comes days after B’nai Brith Canada released a spurious “audit of antisemitism” that highlighted the slogan: “Israel and Canada: Partners in Apartheid, Partners in Colonialism”, indicating that their real target is the anti-racist movement that stands with Palestine. This report was nonetheless given favourable and unchallenging coverage in Canadian media.

It also happened at the same time that the occupation (with the apparent complicity of the U.S.) was denying travel to two Palestinian human rights defenders — part of the “designated six organizations” — to attend the World Social Forum in Mexico. All of this is an attempt to silence the voices of the Palestinian people — but if 74 years of Nakba, state violence, colonialism and mass imprisonment have not done so, escalating smear campaigns are certainly bound for failure.

We urge all people in Canada to take to the streets on May 15 and the Week of Palestinian Struggle, remembering 74 years of ongoing Nakba and celebrating the ongoing struggle for liberation. (See the events in Vancouver and Montreal here — more to come!) We further urge everyone to join us on June 1-4 in Ottawa for the International League of People’s Struggle Assembly. Khaled Barakat will be speaking on behalf of the Masar Badil, the Alternative Palestinian Revolutionary Path, and we’ll also hear from Charlotte Kates of Samidoun, Hanna Kawas of the Canada Palestine Association, and many more strugglers for justice — and discuss how we can build and strengthen our anti-imperialist movement.

We also want to invite supporters of justice and liberation in Palestine to get involved with Samidoun. We’re organizing in Vancouver, Toronto, Ottawa and elsewhere, and we can be even more effective and stronger as we grow and build. We want to work together with your organizations and groups, develop new chapters and welcome new members, and we invite you to join us in struggle. Contact us at samidoun@samidoun.net to learn more about how you can get involved, or click here to donate to support our work.

From the river to the sea, Palestine will be free!