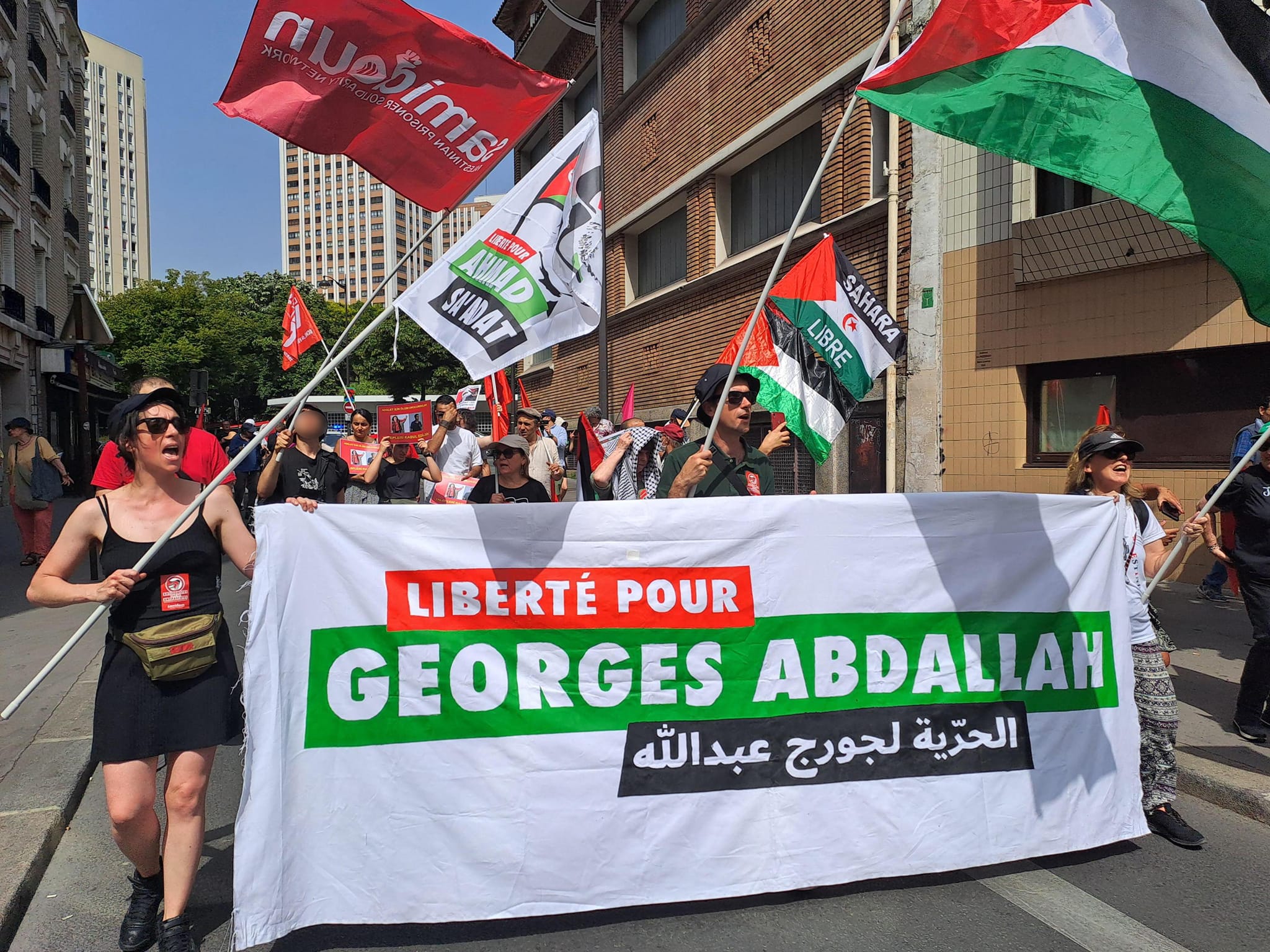 Saturday, 18 June marked an intense day of mobilization to free Georges Abdallah, the Lebanese Arab Communist struggler for Palestine imprisoned in France for the past 38 years, in Paris, France’s capital. The morning began with a Palestine stand at Aubervilliers market organized by Samidoun Région Parisienne, distributing information and material about the case of Georges Abdallah and the Palestinian cause.

Residents of Aubervilliers visiting the market greeted the stand warmly through several hours of information distribution and outreach. Many people were eager to express solidarity with Palestine and Georges Abdallah. Organizers noted that his name is very well known to passers-by, and that despite the attempts of successive French governments to suppress news of his case, he continues to be recognized and supported.

Contrary to the assertion that working-class communities are politically silent, the people of Aubervilliers express consistent support for Palestine, the Palestinian cause and the resistance. Dozens of people wrote postcards and letters to Palestinian women unjustly imprisoned in Damon prison.

A few hours later, the national march to free Georges Abdallah organized to mark the Day of Revolutionary Prisoners began at the Place des Fêtes in the XXᵉ arrondissement, heading toward the Place de la République. The demonstration was called by  the Unitary Campaign for the Liberation of Georges Ibrahim Abdallah and supported by more than 70 organizations. 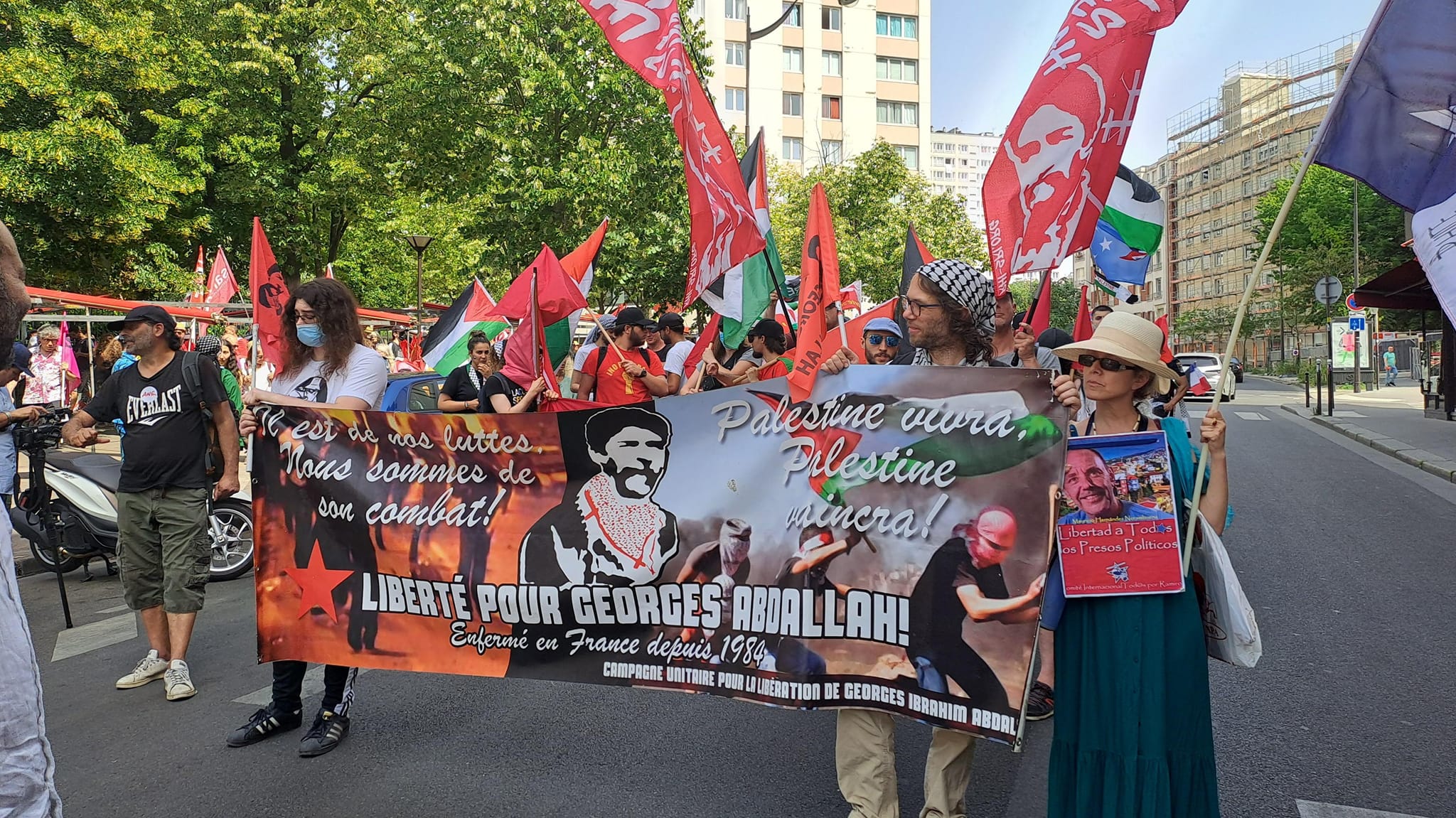 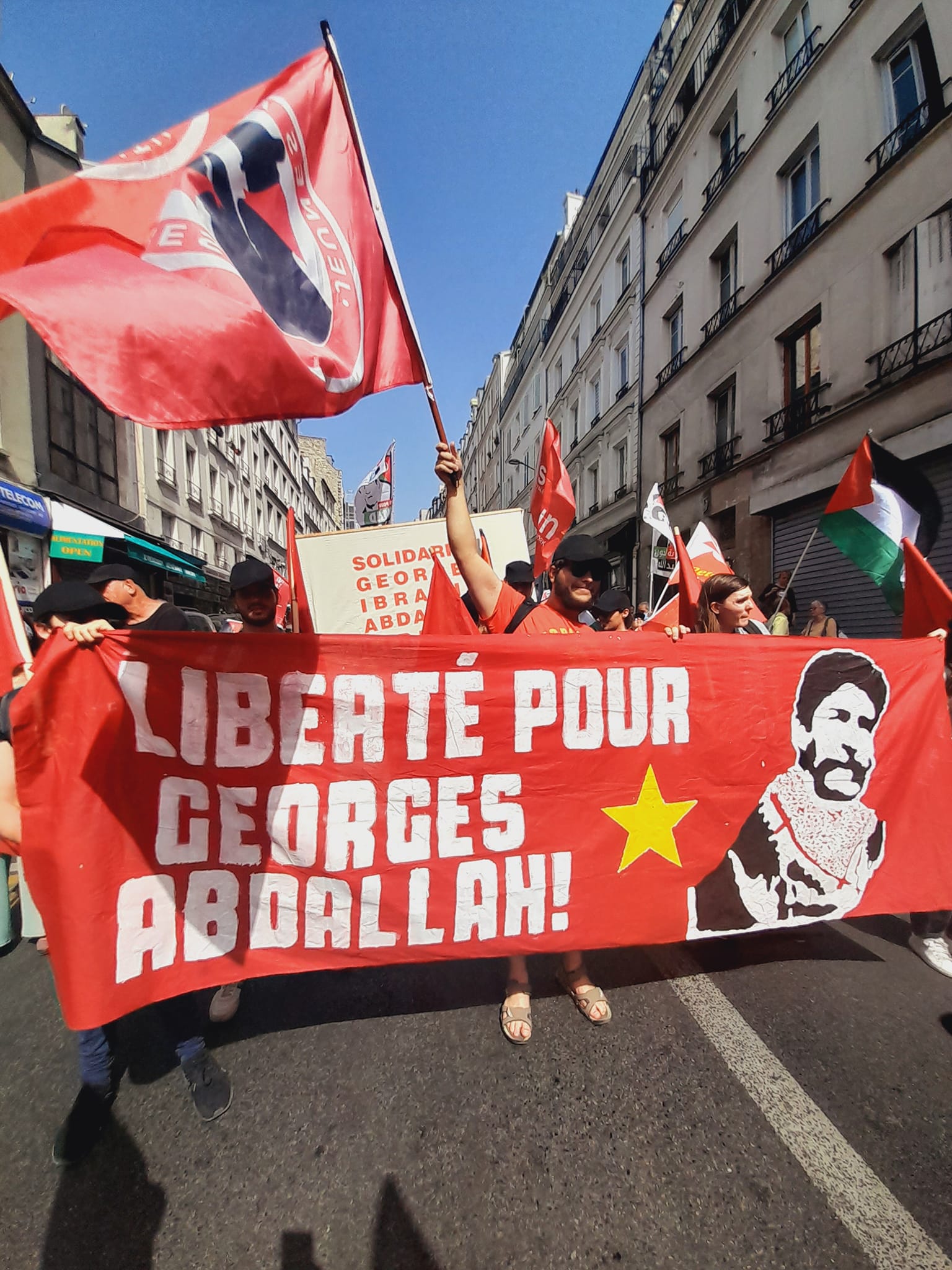 The demonstration began with a declaration by Georges Abdallah and the call of the Unitary Campaign. The statement from Georges Abdallah from Lannemezan prison affirmed: “Let us remember, Comrades, that on several occasions in the not so distant past, the vanguards of the Palestinian revolutionary struggle took on this task with great courage and self-sacrifice, forcing the enemy to release thousands of captive comrades. Certainly the release of revolutionary prisoners has always been a moment of great popular enthusiasm and has always nourished and consolidated the bonds of solidarity on an international scale and thereby participated, in the most significant way, in the influence of the Palestinian revolution. and to the enrichment of the anti-imperialist/anti-capitalist struggle, both at the national and regional level and therefore at the international level.” 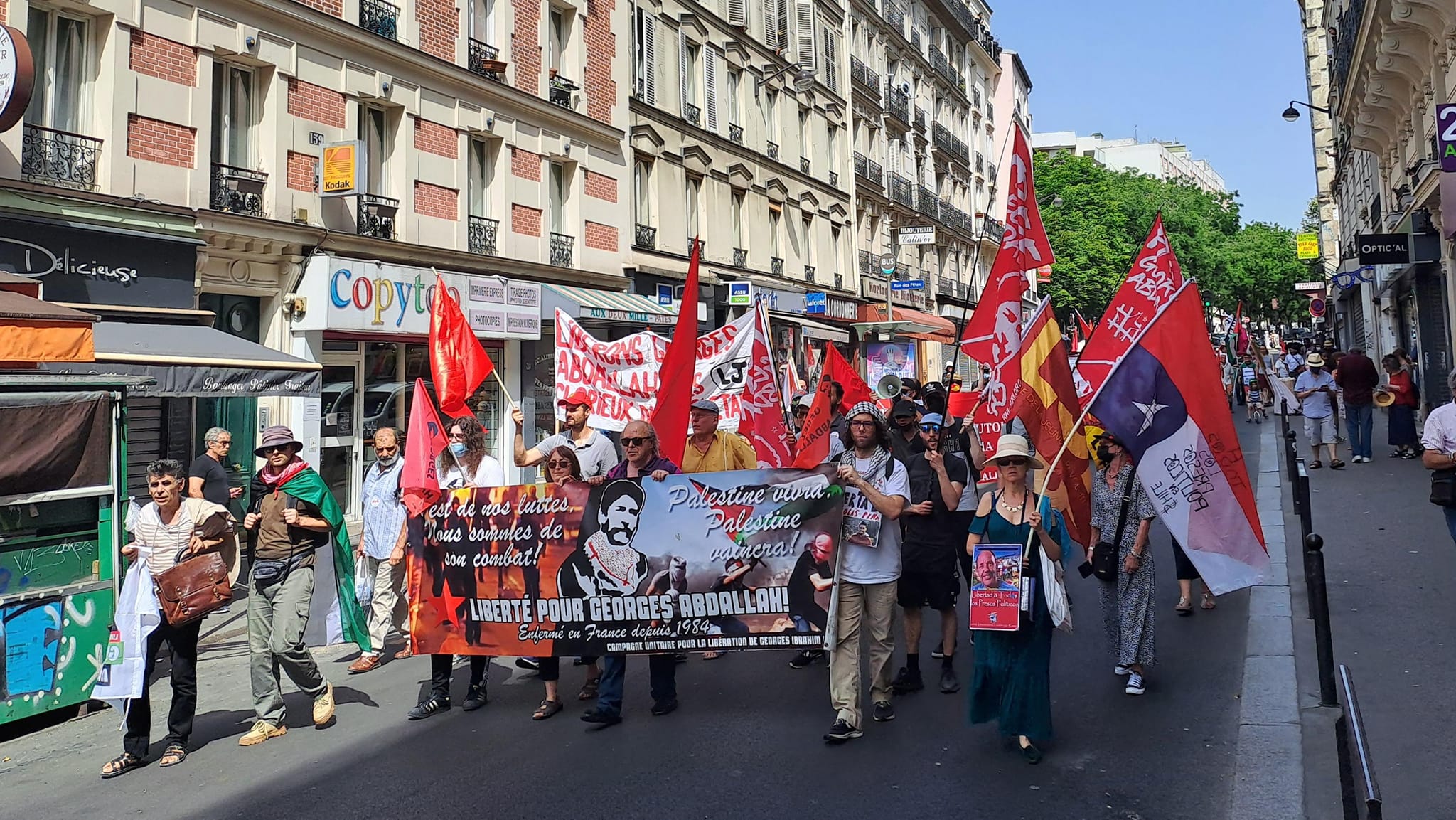 The demonstration also included a tribute to comrades who had recently passed away and who spent many years in struggle to free Georges Abdallah. 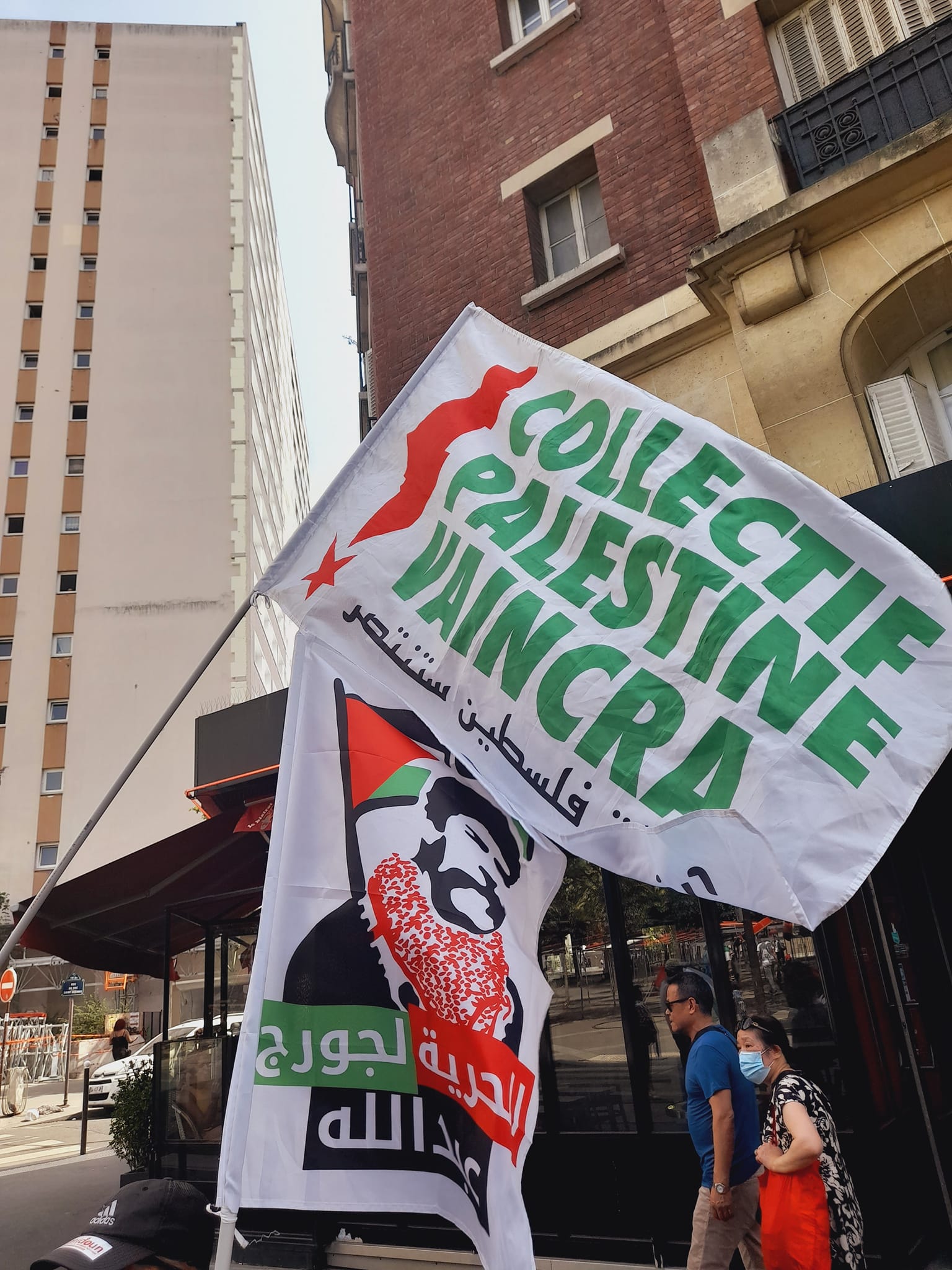 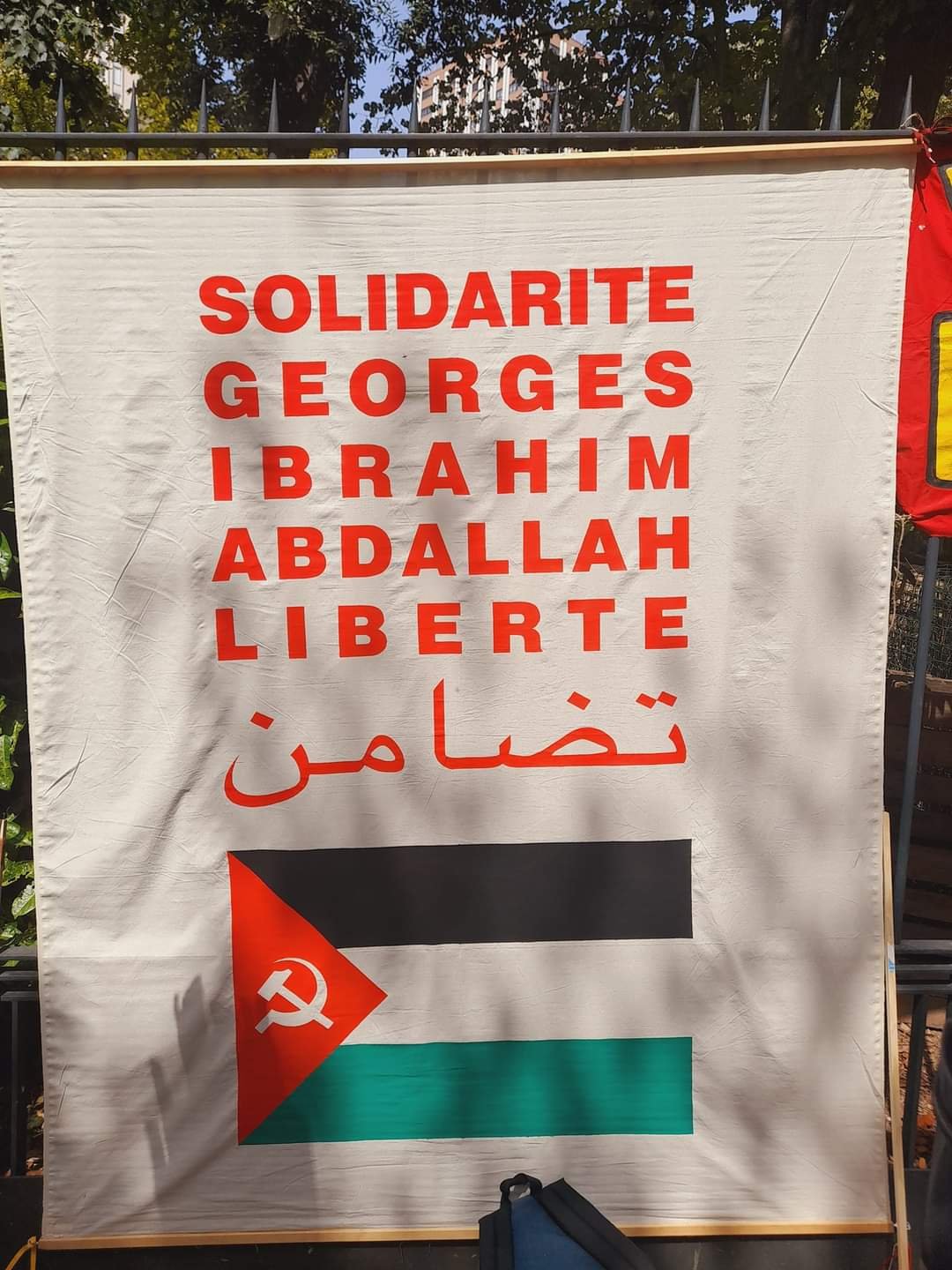 The evening ended with a collective meal at the CNT followed by a Grup Yorum concert.

On the following day, Sunday, 19 June, the  FUIQP Paris Banlieue (United Front of Immigrants and Popular Neighbourhoods) organized a Decolonial Walk in support of the Palestinian Resistance. These Decolonial Walks honor the struggles of colonized peoples and challenge the colonial production of memory and the symbols and figures of colonialism displayed prominently in the streets and cities. This year, the Decolonial Walk honoured the Palestinian resistance and key figures and symbols through the symbolic renaming of streets and squares in Paris’ 18th and 19th arrondissements in their honour. 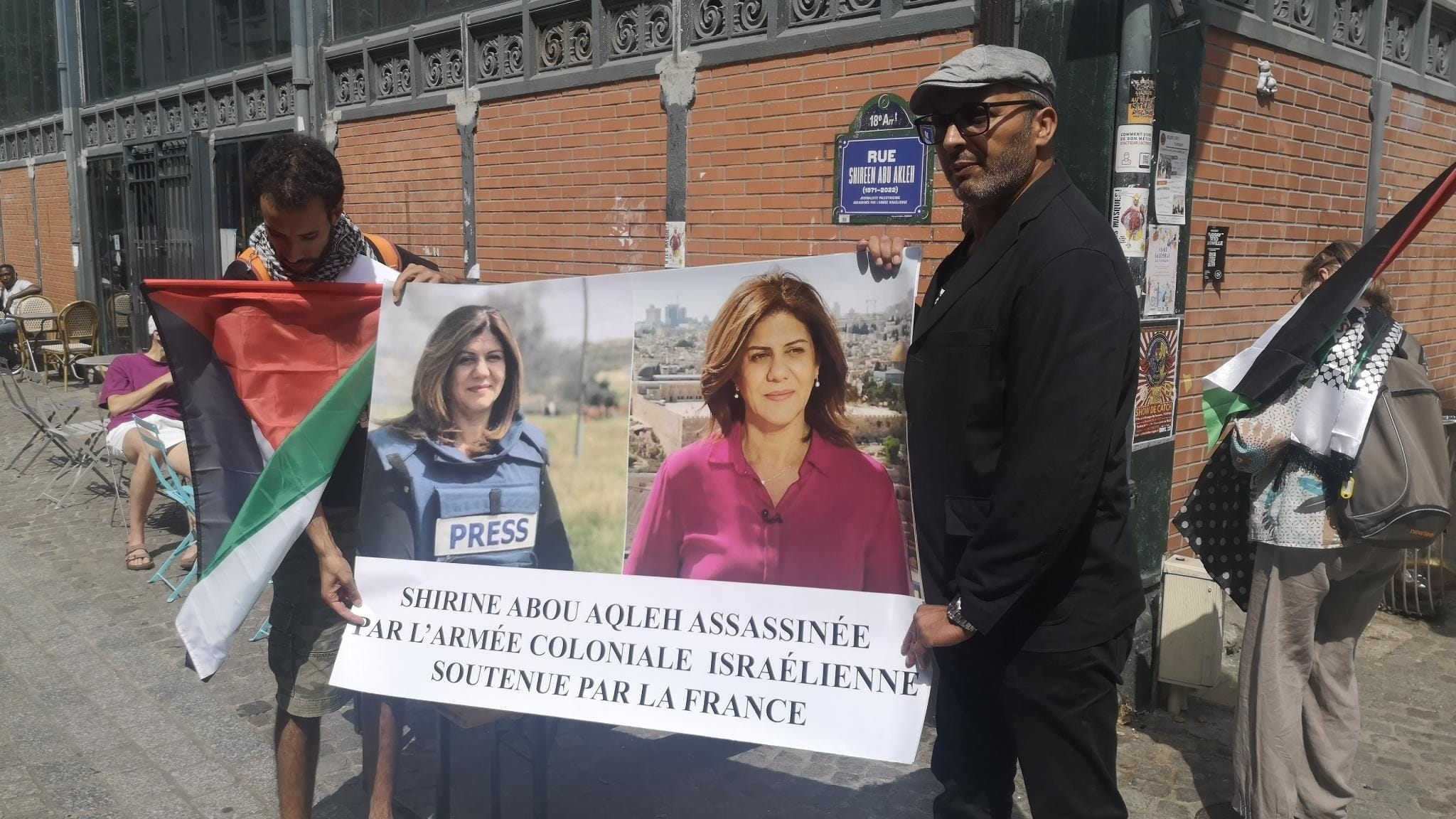 – the “Joinville” square to the “Georges Ibrahim Abdallah” square, where the Unitary Campaign for the Liberation of Georges Abdallah took the floor

Below is the translated version of the speech delivered by Samidoun RP in the Decolonial Walk: 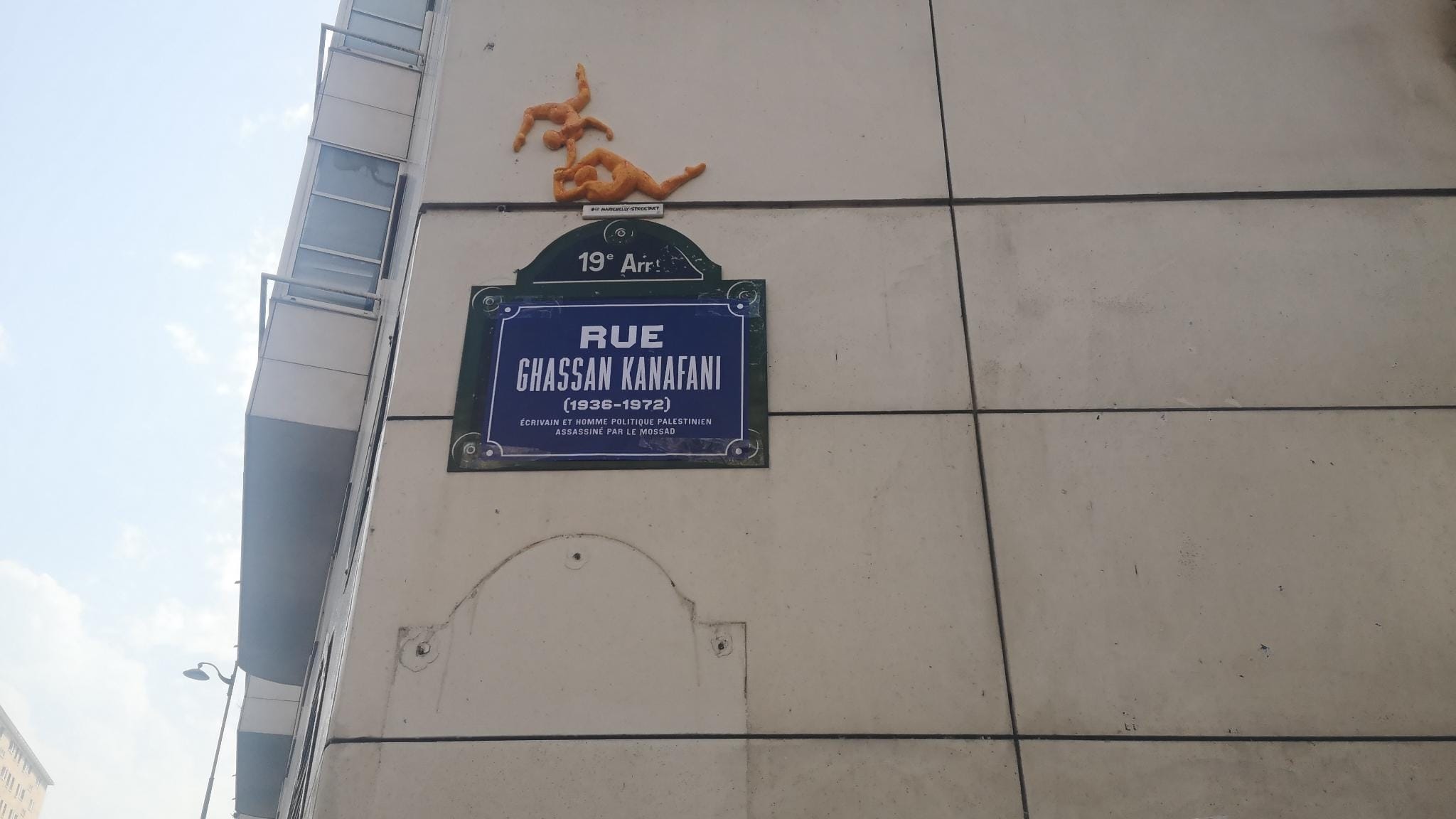 July 8, 2022 will mark the 50th anniversary of the assassination of Ghassan Kanafani, a political and cultural icon of the Palestinian resistance and the Palestinian people. On July 8, 1972, the revolutionary writer was assassinated by a car bomb placed by the Mossad in front of his home in Beirut, along with his niece Lamees Najm.

To honour Kanafani today is to celebrate Palestinian revolutionary arts inside and outside Palestine. It is also to rejoice in the inherent connections between anti-colonial uprisings and the creative spirit, which Kanafani perfectly embodied throughout his life and thought. Fighting for freedom, refusing to succumb to the enslavement of colonialism is a deeply creative process that requires the denial and dismantling of the existing oppressive order, and the audacious lucidity to imagine what awaits us next. He said: “To make the revolution, it is not enough to hate and believe in the past. Hate and faith in the past are only good stimulants for the phase of revolt. If we wish to carry out the revolution, we must love and look to the future”.

Ghassan Kanafani was born on April 9, 1936 in Akka, Palestine. Forcibly exiled with his family during the Nakba in 48, first in Lebanon then in Syria, he studied at the University of Damascus before being expelled for political reasons. He then worked as a teacher in Kuwait before returning to Beirut to devote himself to journalism and cultural and political work within the framework of the Arab Nationalist Movement, founded by George Habash. With him and other comrades, he then co-founded the Popular Front for the Liberation of Palestine, the PFLP, and became one of its international spokespersons. Along with his political involvement, Kanafani worked to collectivize the Palestinian narrative through his literary writings. In his books translated into more than 20 languages, he expressed the reality of the Palestinian people,

Ghassan Kanafani was also a committed internationalist. He considered the struggle against imperialism, including within the imperialist countries, to be at the heart of the struggle for Palestinian and Arab liberation. He said, “Imperialism has spread its body over the world, its head in East Asia, its heart in the Middle East, its arteries reaching Africa and Latin America. Wherever you strike it, you damage it, and you serve the world revolution.”

The assassination of Kanafani on July 8, 1972 is a failed attempt to kill the resistance by killing the writer and revolutionary leader who reflected the liberation struggle of the Palestinian people. He was the voice of the fedayeen in the armed struggle. This Zionist policy aimed at liquidating the resistance of the Palestinian people by targeting its leaders has remained a failure. The words, ideas, analysis and legacy of Ghassan Kanafani are more relevant than ever, 50 years after he was stolen from us at the age of 36.

Today, in the prisons of the occupation, the Palestinian prisoners collectively read the works of Kanafani and transform the dungeons of the occupier into schools of the revolution! His cultural and political writings continue to educate and inspire generations of Palestinians, Arabs and internationalists. Thus we make our own the words of Kanafani: “The Palestinian cause is not a cause for the Palestinians only, but a cause for every revolutionary, wherever he is, as a cause of the exploited and oppressed masses in our time.”

Samidoun Région Parisienne would like to warmly thank the people and organizations we were able to meet and with whom we were able to parade over the past two days. Do not hesitate to contact us on our social networks (Instagram , Facebook , Twitter) or by email at samidoun.rp@gmail.com if you wish to participate in our initiatives, such as our stands in Aubervilliers or the sending of letters of support to Palestinian prisoners. Building here and now an anti-imperialist solidarity with Palestine contributes to supporting the Palestinian resistance which continues to fight for liberation and return. Despite more than 74 years of occupation and dispossession, the Palestinian people continue more than ever their fight against imperialism, Zionism and the reactionary Arab regimes. It is up to us to answer his call!