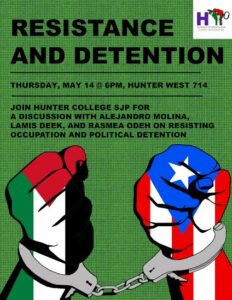 FROM PALESTINE TO PUERTO RICO: FREE ALL POLITICAL PRISONERS!

Join Students for Justice in Palestine at Hunter College for our last event of the year – a panel discussion on political prisoners. With an emphasis on Palestinian and Puerto Rican political prisoners, we will be joined by speakers with experience and knowledge about struggles for liberation from prison.

– Lamis Deek, Palestinian-American human rights attorney and organizer based in New York City. She is co-founder of al-Awda, the National Right to Return Coalition. In addition, Lamis Deek has defended the right to protest, religious and civil freedoms, numerous student activists, while fighting surveillance and predatory prosecutions. She continues to expose injustices at home and abroad.

– Alejandro Molina, representative from the campaign to free Oscar López. Oscar López, a Puerto Rican-independence freedom fighter, was sentenced in the 1980s to 70 years in prison. He is currently incarcerated. López was offered conditional clemency by U.S. President Bill Clinton in 1999, but rejected the offer. His sister, Zenaida López, said he refused the offer because on parole, he would be in “prison outside prison.” López refused to negotiate terms of his release because of the unfair nature of the legal system.

– Representative from the campaign to free Rasmea Odeh. Rasmea Odeh, a well known Chicago-based feminist, anti-war, immigrant, and Palestine solidarity activist and organizer, was convicted of immigration fraud in November 2014 and sentenced in March 2015 to 18 months imprisonment, with deportation to follow her release. She is currently free on bail while seeking an appeal.

Due to legal restrictions, Rasmea Odeh cannot presently travel, but she is expected to call in or record a message.

Refreshments will be served. Room to be announced.