Palestinian hunger strikers Muhammad Allan and Uday Isteiti have now entered the critical sixth week of complete hunger strike, to protest Israel’s illegal practice of Administrative detention –  of caging Palestinians indefinitely without charge or trial. It is medically understood that at six weeks the gruelling symptoms of a hunger strike become life-threatening with great risk of death from heart failure. Please join us on Friday 31st July, day 46 of their hunger strike, for an emergency protest outside the world headquarters of the BBC, to demand freedom for Muhammad Allan and Uday Isteiti, and to demand the BBC lift its reporting blackout of the hunger strikers. As with previous hunger strikes the BBC have remained silent over the plight of Palestinian hunger strikers, similarly during Khader Adnan’s recent hunger strike the BBC never once reported on it until he had achieved victory and Israel agreed to release him.

The latest information we have on the health of the hunger strikers is that Muhammed Allan is suffering from substantial weight loss,  uncontrollable constant vomiting, shortness of breath and severe headaches. Uday Isteiti is suffering from extreme pain in his joints and can hardly move, but the prison is refusing to provide him with a wheelchair. He is also now suffering pain in his kidneys and blue spots have began to appear on his body. When the body runs out of vitamins and minerals, the cells don’t have the energy to perform basic functions and basic systems begin to break down. Their lives are in critical condition and we must act now to save them. 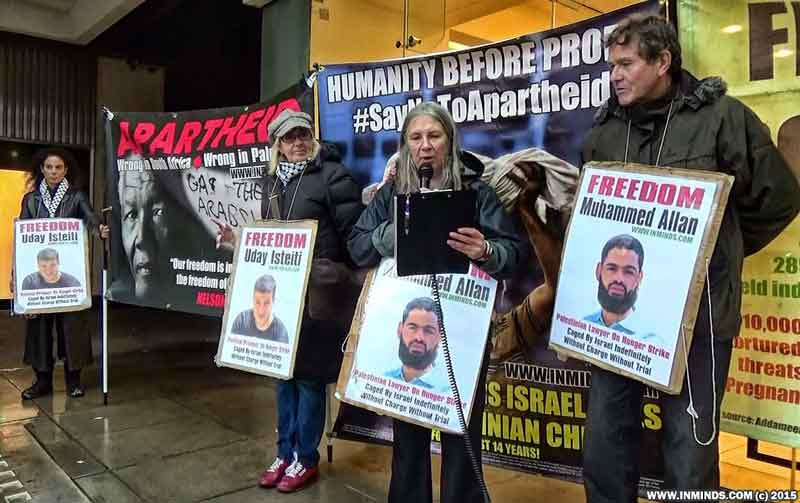 This protest is being organised in co-ordination with our friends at the ‘Prisoner’s Center for Studies’ in Gaza  as part of a joint protest with one they are holding this week in Gaza outside the International Red Cross to show global united solidarity with the hunger strikers. We thank them for the help they have provided in vital information that has helped us mount this protest. 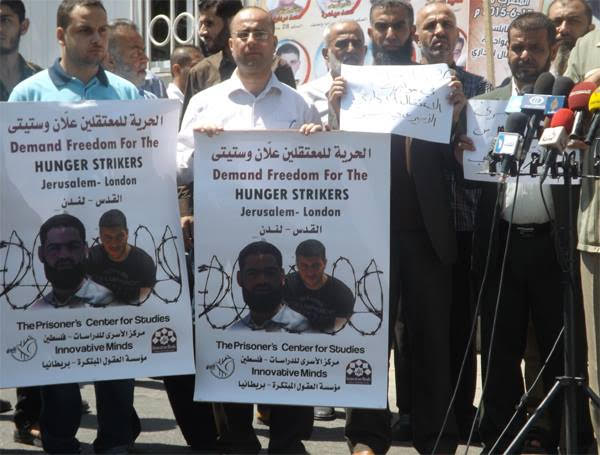 At the protest we will also be condemning today’s (28th July 2015)  violent attacks on Palestinian political prisoners in Nafha and Ramon prison by Israeli Special Forces which left 30 Palestinian prisoners including Palestinian MP Ahmad Sa’adat injured. In the early hours of the morning more than a thousand Special Forces soldiers of the Dror and Metzada brigades carried out the attack by breaking into the prisoners cells, and savagely beating the defenceless detainees. They ransacked the rooms, smashing and stealing the detainees belonging.

Uday Isteiti is from Jenin refugee camp. He has been caged by the occupation since 17th November 2014 without charge or trial, under administrative detention, at Israel’s G4S secured Ketziot prison in the Negev. G4S provides and maintains the entire security system that keeps this hell hole operational. Isteiti went on hunger strike after the occupation again renewed his administrative detention. As punishment for refusing food he has been transferred to Eshel prison and locked up in solidarity confinement with severe measures being imposed on him. He is not permitted to bathe for more than two weeks now and is being refused a change in cloths. Vindictively the Israeli jailers have also taken away his Holy Qur’an during the month of Ramadan.

Both Allan and Isteiti started their hunger strike on 15th June 2015, and by friday 31st July they will have been without food or nutrients for 46 days.  Their hunger strike follows the manner of Khader Adnan’s hunger strike in that they are refusing everything apart from water so their bodies cannot survive long.

Administrative detention is a practice used by Israel to imprison Palestinians indefinitely without charge or trial.

Prisoners are given rolling detention orders which can be anything from 1-6 months, renewable indefinitely. This is against international law. For example administrative detainee Mazen Natsheh has been locked up cumulatively for nearly 10 years without ever being charged with anything.

Detention orders are based on so called “secret information” which never needs to be produced, either to the detainee nor their lawyer.

Administrative detention is often used to arbitrarily jail Palestinians where there is no evidence for a trial, or for punishment as in the case of 8 Palestinian MPs.

Israel has on average issued over 2000 detention orders every year (2007-2011). Today there are around 450 administrative detainees. Most of them, like hunger strikers Allan and Isteiti, having been transferred from the West Bank into Israel in contravention of Article 76 of the Fourth Geneva Convention.

We will, inshAllah, be tweeting live from the protest with live photos being uploaded to our twitter and facebook page. So if you can’t join us on the day, please help us by sharing the photos as they get uploaded.

If you support this activity please share this alert widely, thank you.