Palestinian prisoner Nahil Abu Aisha, 34, from Al-Khalil, was transferred to Soroka Hospital yesterday from the Israeli Hasharon military prison where she has been imprisoned for over two years. She has experienced a severe decline in her health and her family is urging action by the International Committee of the Red Cross, Palestinian officials and supporters of Palestine to protect her life and health.

She is shackled in the hospital under the pretext of being a threat to security. She was also injured several months ago when she was beaten by a guard in the prison.

Her family notes that she has been targeted for repression, being denied family visits and woken in the middle of the night for frequent raids and inspections. She is serving a 33 month sentence (and was also fined 2000 shekels) for her activity to defend homes in her village threatened by settler violence and confiscation. She works in Qabatiya School in Tal Rumeida area near Ibrahimi Mosque and has been arrested on multiple occasions for her activism to protect the Old City and Ibrahimi Mosque from settler attacks. 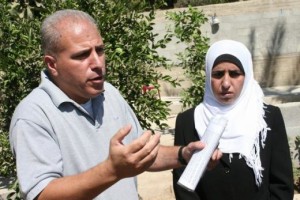 Fellow Palestinian prisoner Ihsan Dababseh’s military trial was postponed for the eighth time in a row, to be resumed on 24 November 2015. Dababseh, 30, a former prisoner from Nuba village near Al-Khalil, has been imprisoned since 13 October 2014. Her trial has been postponed repeatedly during that time, and she has been subject to sanctions and mistreatment in Hasharon prison.

She has been denied family visits repeatedly and was isolated for a week with four other prisoners after raising the Palestinian flag on the anniversary of the Nakba.

Amal Taqatqa, 21, a Palestinian prisoner from Beit Fajar in Bethlehem, is urgently demanding access to an orthopedic specialist as her bones are still damaged by the fragments of bullets in her hand from being shot by Israeli soldiers when she was violently arrested on 1 December 2014 at Etzion checkpoint near Bethlehem. She still has shrapnel in her hand.

Her family are urging that a specialist doctor be allowed to enter the prison to treat her, a request that has been denied by the Israeli prison administration. In the meantime, she is receiving no treatment for her continuing injuries from the clinic in Hasharon. Her military trial has also been postponed repeatedly and her next hearing is on 20 September.