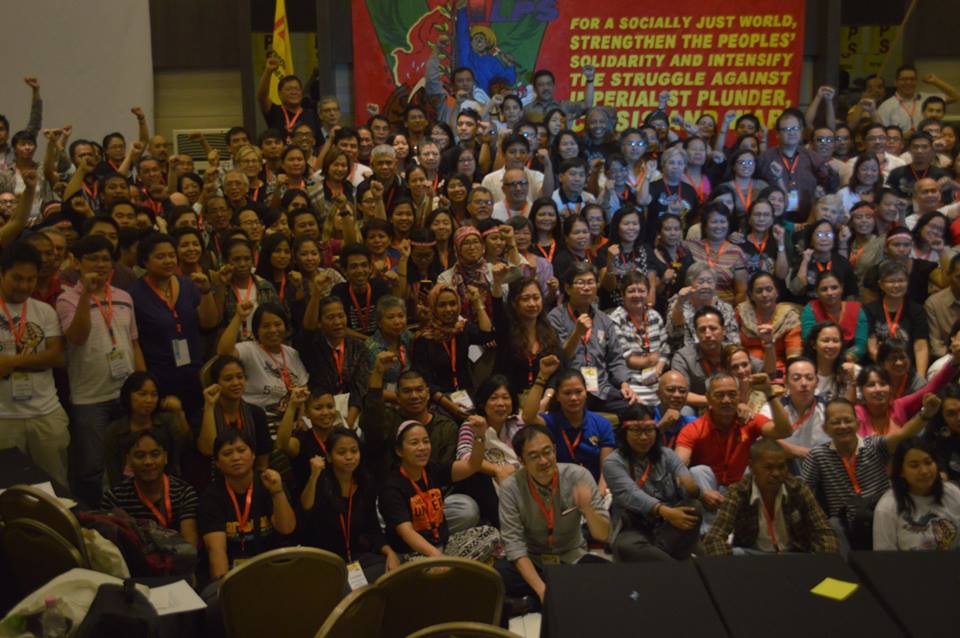 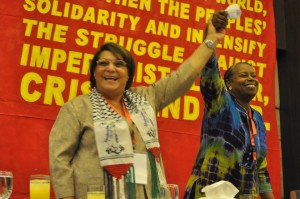 Mohammed Khatib of Samidoun was part of the Palestinian delegation to the ILPS Assembly, and was elected as a member of the new International Coordinating Committee (ICC) of ILPS, representing Samidoun. Aiyanas Ormond of Samidoun, who is also the chair of ILPS Canada, also participated in the Assembly and was elected as an alternate member of the ICC.

The Palestinian delegation at the ILPS assembly also included Palestinian resistance icon and leftist political leader Leila Khaled, of the Popular Front for the Liberation of Palestine, who was a keynote speaker at the Assembly, as well as members of the Palestinian Youth Movement. Khaled and Cynthia McKinney were the two headlining speakers of the Assembly. 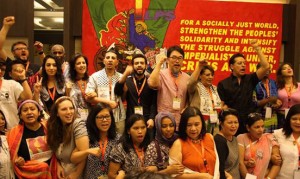 Khaled also participated – joined by Samidoun representatives – in the mass demonstrations against APEC, the Asia-Pacific Economic Cooperation, in Manila, which brought thousands to the streets to demand an end to imperialist and capitalist exploitation and plunder of the peoples of the region. She also spoke at the International Women’s Assembly, to BAYAN, the alliance of mass organizations in the Philippines, and gave numerous media interviews.

Samidoun also held a meeting with Karapatan, a Philippine organization dedicated to freeing political prisoners of the movement in the Philippines, and planned future joint actions and projects.

The ILPS Assembly adopted a statement on Palestine calling for international actions on November 29 (see full text here) and issued the following report of its activities (see below).

Samidoun Palestinian Prisoner Solidarity Network looks forward to continuing to work with popular and mass movements in the Philippines and around the world through ILPS, in the struggle against imperialism and oppression and for justice and liberation.

The International League of Peoples’ Struggle (ILPS) successfully held its Fifth International Assembly (5th IA) from November 14 to 16, 2015 in Manila, Philippines with the theme, “For a Socially Just World, Strengthen the Peoples’ Solidarity and Intensify the Struggle Against Imperialist Plunder, Crisis and War!”

The gathering confirms the League’s status as the largest and most consolidated global formation of militant, anti-imperialist and democratic organizations in the world today.

Before a packed audience at Sequoia Hotel, Len Cooper, Vice Chairperson of the ILPS, opened the 5th International Assembly by welcoming the delegates from all the global regions.  He noted that the timing of this conference was chosen to coincide with the leaders meeting of the Asia-Pacific Economic Conference (APEC) in Manila.  He put forward the people’s demand that APEC and its imperialist agenda be scrapped.

Cynthia McKinney, former member of the US Congress, delivered the first keynote speech.  She recounted the numerous ways that US President Obama has betrayed and thwarted the aspirations of the peoples in Asia.  She concluded by warning the audience, “Beware President Obama’s Pivot to Asia!  Don’t get tricked and don’t be fooled!”

Also keynoting the Assembly was Leila Khaled, the celebrated Palestinian freedom fighter. She spoke of the intifada emerging in Palestine today, “an intifada that like its predecessors is based among those who are most marginalized, most oppressed and most determined to seek their freedom.”  She called on the international movement of the peoples of the world to support the Palestinian people in materially changing the balance of power and escalating the cost of occupation – through escalating the boycott of Israel economically, militarily, politically, academically and culturally.

After the open forum with the keynote speakers, the Assembly approved the Agenda and the Rules of Participation including the Rules for Nominations and Elections to guide the conduct of the whole proceedings.

ILPS Chairperson Jose Ma. Sison then gave his report on the work of the ILPS through a recorded video.

Sison said that the Assembly is deliberately timed to oppose the APEC summit and the neoliberal economic policy of imperialist globalization which continues to brutally exploit the working people and plunge the world further in an ever worsening economic and social crisis.  He discussed the major aspects and trends regarding the current global crisis of the capitalist system, the intensifying exploitation and oppression of the people by imperialism and reaction, and the growing resistance of the people.

He then summarized the accomplishments of ILPS over the last 14 years covering the 17 concerns of the alliance.  He concluded by outlining the important tasks of the ILPS in terms of information campaigns and political education; mobilization around burning issues; cooperation with other organizations, institutions and international alliances; and expanding the membership of ILPS.

Malcolm Guy, General Secretary of the ILPS, delivered the report of the work of the general secretariat.  He made a rundown of the speeches and statements made by the Chairperson; the major actions and meetings organized by ILPS members or attended by ICC members; and changes in the website.  He noted the challenges faced by the League as it develops more as a multilingual, multinational anti-imperialist united front.  He concluded by pointing out the major tasks for the ILPS in terms of political education, organization, mass mobilization and establishment of ILPS Chapters.

Lyn Meza, Auditor of ILPS, shared the report prepared by ILPS Treasurer, Theo Droog, on the financial situation of the League.  She noted the increase in the “reserve funds” of the League due to membership and assembly fees collected during the last 4th IA. Nevertheless, she noted the ongoing weakness in terms of the irregular collection of membership dues. For a while, the Treasurer lacked knowledge of tax obligations but the secretariat was able to consult tax experts knowledgeable about tax laws and private foundations.

Workshops on the different concerns of the League were successfully held, combining theoretical discussions and sharing of practical experience in peoples’ struggles. They passed important resolutions and approved major campaigns on their respective areas of concern. In the tradition of ILPS assemblies, the results of the workshops were presented in the plenary through creative and militant presentations by the respective commissions.  These were all enthusiastically received and approved by acclamation.

The 5IA was also a fighting assembly with delegates joining mass actions after or in-between sessions.  ILPS delegates joined the “kampuhan” (people’s camp) of the Manilakbayan from Mindanao at the Baclaran Church to express solidarity with the struggle of the Lumad against intensifying militarization, killings and imperialist plunder of their lands.

ILPS delegates also held a candle-lighting ceremony at the Boy Scouts Memorial Rotunda for the victims of the recent bombings in Beirut and Paris. Speakers condemned the Daesh (or ISIS) for targeting and killing civilians but also blamed the US and its NATO allies for waging imperialist wars on the peoples of Southwest Asia and North Africa and beyond while arming and training terrorist groups like ISIS in order to help bring down independent regimes and destroy societies that do not fit in their imperialist schema.

International delegates also joined Hacienda Luisita farmers and supporters to mark the 11th year of the Hacienda Luisita massacre with a protest at the Ninoy Aquino Memorial Shrine on November 16. On the same day, ILPS delegates joined workers at the Boy Scouts Rotunda for the International Day of Action against trade union repression. Briefings were also held for the Peoples Caravan Against Imperialist Globalization and the big march against APEC to be held two days after the Assembly.  All these actions were well covered by the media.

On the last day, the Assembly discussed and approved the General Declaration of the 5th IA by acclamation. It reflects the Assembly’s analysis of the major contradictions in the world capitalist system today, the increasing brutality of imperialist powers led by the US, and the rising tide of people’s resistance in all corners of the globe.

The Declaration also took note of the recent spate of bombings in Beirut and Paris.  The Assembly warns that US imperialism and its NATO allies will be using or taking advantage of these criminal terrorist attacks against the people as a pretext for further aggression and intervention and to justify intensifying fascism and state terror, as they did with the 9/11 attacks. The ILPS resolved to thoroughly expose this duplicity and be prepared to confront more imperialist attacks.

And the following as alternate members:

Two books were launched on the last evening of the Assembly – “More Than a Red Warrior: Arnold Borja Jaramillo, Beloved Son of Abra”, a tribute to a Red fighter captured, tortured and summarily executed by the Philippine military last year; and the book of proceedings of the International Peoples’ Tribunal recently held in Washington, DC.  This Tribunal concluded that the governments of the Philippines and the US were guilty of systematically violating the rights of the Filipino people, including such crimes as the extra-judicial killings and massacres of critics of these governments.

The 5th International Assembly was concluded and a Solidarity Cultural Night was held to celebrate the achievements of the League with the participants expressing their continuing commitment to the struggle.  Delegates and guests from all participating countries and from various mass organizations in the Philippines sang, rapped, delivered poems, performed music, danced and celebrated international solidarity and the spirit of resistance. Highlights included a duo between and rapper from the US and a young Lumad singer along with a performance remembering the Ayotzinapa 43 in Mexico. Participants thanked the hosts of the 5IA – the ILPS Philippine chapter supported by Hong Kong and Macau – for the well-organized Assembly and warm hospitality and collected and presented a donation to the hotel staff who looked after the needs of the delegates and guests.

Inspired and revitalized by the resounding success of the 5th International Assembly, the delegates reaffirmed their commitment to raise higher their political will and capabilities in facing up to the challenges and in effectively advancing the work of the League in every arena of the anti-imperialist and democratic struggle of the world’s peoples.