Home Events 10 December, Washington DC: Protest to free ICE Detainees on Hunger Strike
Samidoun Palestinian Prisoner Solidarity Network stands in solidarity with hunger striking asylum seekers in US detention! We call for their immediate release and an end to deportations.  We note that, like Palestinian prisoners, detainees at Guantanamo and in California prisons, the strikers are being threatened with the life-threatening torture of force feeding. We urge all to participate in actions to support the detainees, including the protest before. To learn more details of the strike, visit: www.notonemoredeportation.com/free-the-hunger-striking-detainees/
What: Protest to Free Detainees on International Human Rights Day, what will be Day 14 of Hunger Strike
Where: Immigration and Customs Enforcement Headquarters, 500 12th St. SW, Washington, DC
When: 11:30am, Thursday, December, 10th, 2015
Who: #Freedomgiving Hunger Strike Support Committee 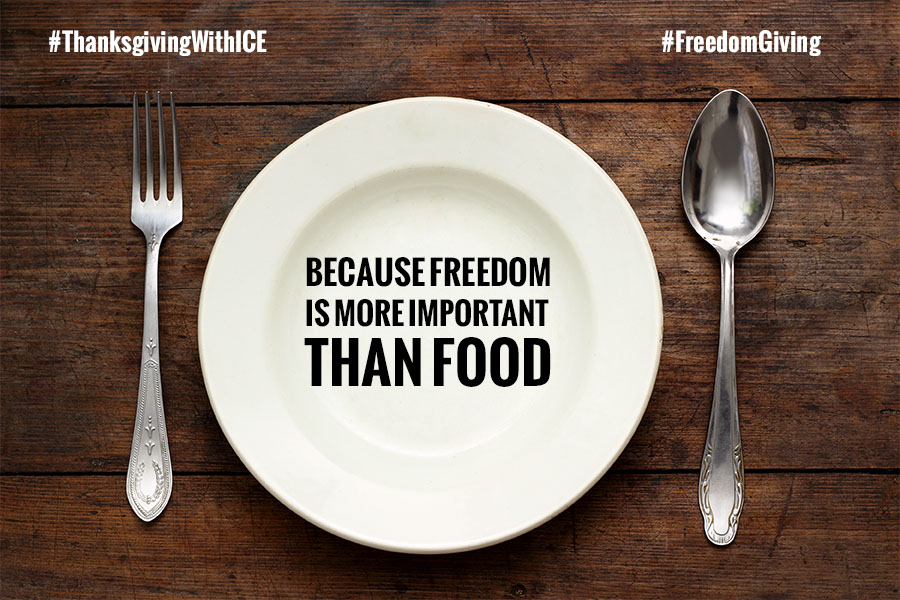 The situation surrounding the #freedomgiving hunger strike that was started by more than 100 asylum-seekers in several detention centers reached grave proportions as an Alabama judge authorized forced feeding of at least one of the men and invasive medical procedures of others held at Etowah according to documents obtained by supporters.  Nearing two weeks without food, at least seven hunger strikers have been taken to the medical unit while strikers report authorities torturing them with sleep depriving cell visits every fifteen minutes for the past two days.
A protest outside the Clinton Campaign headquarters in New York prompted Sanders and O’Malley to express support for the strikers, one of whom met with Sanders during a live telecast yesterday where the Senator committed to inquiring at ICE on the strikers’ behalf and was asked to visit the strikers to investigate their situation.
While ICE reached a release agreement with strikers at the Theo Lacy center, it has taken the opposite approach in other facilities; attempting to deport men who participated in an October hunger strike, enacting sleep deprivation tactics, placing participants in solitary confinement, and cutting off lines of communication to outside support.
“The men who are being tortured by ICE are experiencing at the hands of the US government the very treatment they sought asylum from,” explained with alarm, Fahd Ahmed, director of DRUM – Desis Rising Up and Moving.  “The detainees can’t be kept safe in detention, let alone prepare their case for asylum in those conditions. They must be released immediately.The world is watching what immigration authorities are doing to these people seeking safety on international human rights day and it is outrageous. The current administration and the candidates, all elected officials have an urgent responsibility to put a stop to ICE’s abuse.”
On Thursday, supporters of the strikers will rally at the ICE headquarters to demand the agency release the detainees, halt the torture tactics, and cancel deportation proceedings against participants.
Strikes are continuing at multiple facilities including Aurora, Etowah, S. Texas, and Krome.
The series of releases and details of the strike are available at: www.notonemoredeportation.com/free-the-hunger-striking-detainees/

Being a revolutionary is not a crime: Communists from Turkey persecuted in Germany