Home Events 22 December, US: Holiday Call-In Day to the White House: Peace for... 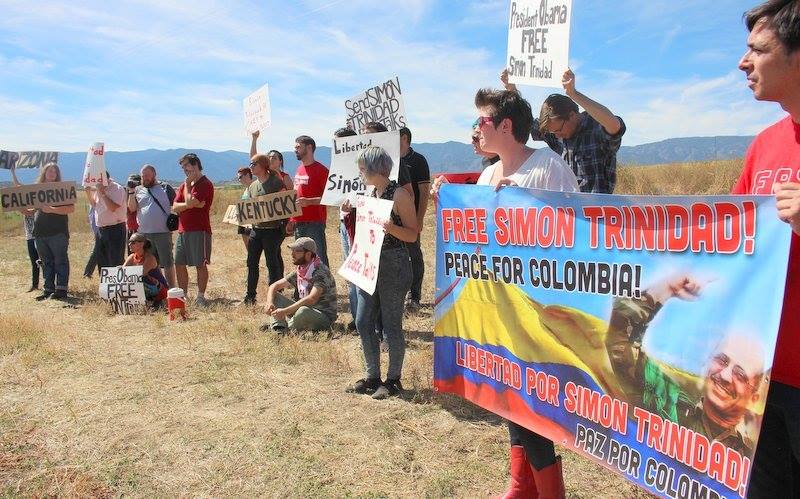 Say: “I want Peace for Colombia and to ask President Obama to free Simon Trinidad for the holidays! Trinidad belongs at the peace talks, not in solitary confinement at the Florence Colorado Supermax prison. Peace on Earth and goodwill to all!”

Big step forward for the Colombian Peace Process! Now is the time to Free Simon Trinidad!

Breaking news:
The FARC-EP and the Colombian government just signed an agreement pertaining to the victims of the 51-year civil war. FARC-EP representative Marco Leon called the agreement ‘nearly irreversible.’ This places high importance on the immediate release of Simon Trinidad so that he may fulfill his role in the coming months of negotiations.

No Turning Back! Free Simon Now! Peace for Colombia!

The peace process between the Revolutionary Armed Forces of Colombia (FARC) and the Colombian government is moving forward in Havana, Cuba. Freeing Simon Trinidad to take part in peace talks would be a concrete action the Obama White House could take to show it supports the Colombian peace process. The holidays are a perfect time to make it happen.
We support peace with justice in Colombia as six points are being negotiated—land reform, drug crop eradication, transitional justice, political participation, end of armed conflict, and implementation. The outcome of these peace negotiations will determine the future of Colombia. It is important at this crucial time of peace talks to support the people’s movements in Colombia and demand the right-wing death squads stop killing leaders and activists.

Plan Colombia, the U.S. war of the past 15 years, brought poverty, misery and death to the Colombian people. It cost over $9 billion. With its fumigation of poor peasants crops and death squads targeting trade unionists, teachers, and activists, it is a massive failure.

Today the White House is supporting the peace talks, realizing Plan Colombia is a failure and that it cannot defeat the FARC. The Pentagon says the war will go past 2050 at current levels of fighting. Wall Street wants a peace process in Colombia because oil, mining, and mineral corporations want access to large no-go areas under the leadership of FARC or ELN.

Free Simon Trinidad for the holidays!

Simon Trinidad, also known as Ricardo Palmera, is a FARC negotiator and political prisoner of the U.S. government. Trinidad is being tortured in solitary confinement in the Florence, Colorado Supermax prison. A few months ago, on Sept. 21, thirty-five protesters marched and rallied in the mountains of Colorado chanting “Peace for Colombia, Free Simon Trinidad!” Now it is time to spread that message across the country and deliver it to the White House.

As the Colombian peace negotiations continue, the FARC says Simon Trinidad is needed in Havana. Trinidad played an important role in past negotiations and he represents the people’s movement history. For a lasting peace with justice in Colombia, ask President Obama to free Simon Trinidad now!