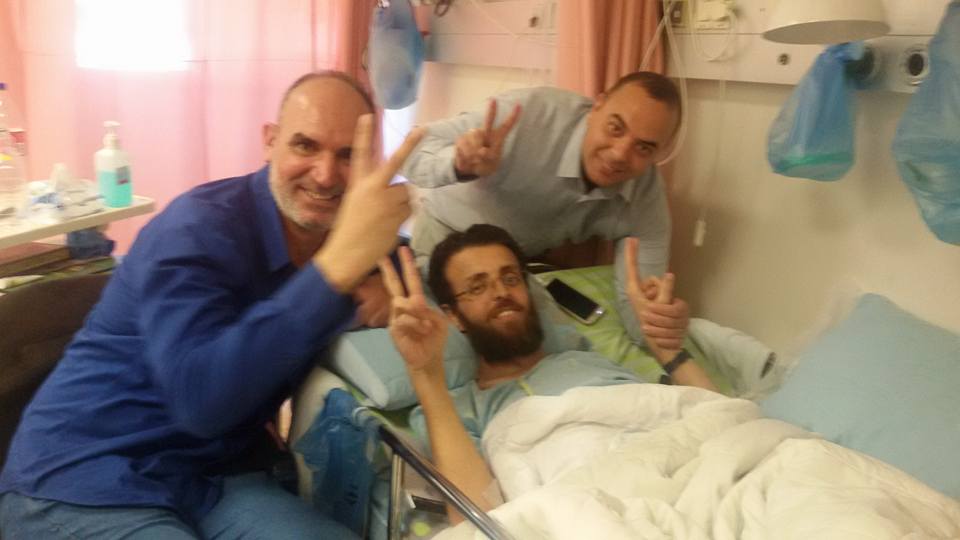 On Friday, 26 February, after completing 94 days of hunger strike, Palestinian journalist Mohammed al-Qeeq suspended his strike in an agreement announced by the Palestinian Prisoners’ Society. He was joined in his hospital room by Palestinian members of Knesset, other Palestinians from ’48 who have been by his bedside for weeks and legal representatives for the announcement.

According to the terms of the agreement, al-Qeeq’s administrative detention will end on 21 May 2016. He will be treated in Israeli hospitals before that time, and he will receive family visits that have been denied up to this point.

Al-Qeeq, 33, a Palestinian journalist for al-Majd TV, was arrested by Israeli occupation forces on 21 November 2015 in a violent raid on his home. On 25 November, he announced the start of his hunger strike after 15-hour periods of being shackled to a chair in stress positions and threats of sexual violence and assault. He continued his hunger strike for 94 days, demanding an end to administrative detention without charge or trial, as despite an Israeli Supreme Court “suspension” of his detention, he continued to be denied family visits, including from his wife Fayha and two small children, as well as treatment at a Palestinian hospital. Fayha called the agreement a “very big victory” in a media statement. He is now receiving medical treatment and examinations.

Samidoun Palestinian Prisoner Network salutes the steadfastness of Mohammed al-Qeeq, a true example of the resistance of Palestinian prisoners struggling constantly for freedom and liberation, for themselves and the entire Palestinian people.

We note that while this agreement has been reached, it has not yet been implemented, and that it is critical that the eyes of the world remain on the Israeli state to ensure the protection of the life and health of Mohammed al-Qeeq and that he is freed as agreed upon.

Further, it is appalling that in order to achieve even the vaguest kind of justice, a Palestinian must be on his deathbed and nearly starving to death at 94 days of hunger strike. It is also appalling that a Palestinian needs to be on hunger strike for 60 days – longer than many people are able to live at all without food – in order to begin to garner international attention or any kind of media coverage.

Photo by Mohammed Kana’aneh, Palestinian leader from ’48, taken at al-Qeeq’s hospital bed following the announcement of the agreement and the end of his strike.