Home Campaigns Administrative Detention Samidoun speaks, calls for action at the European Parliament on the case... 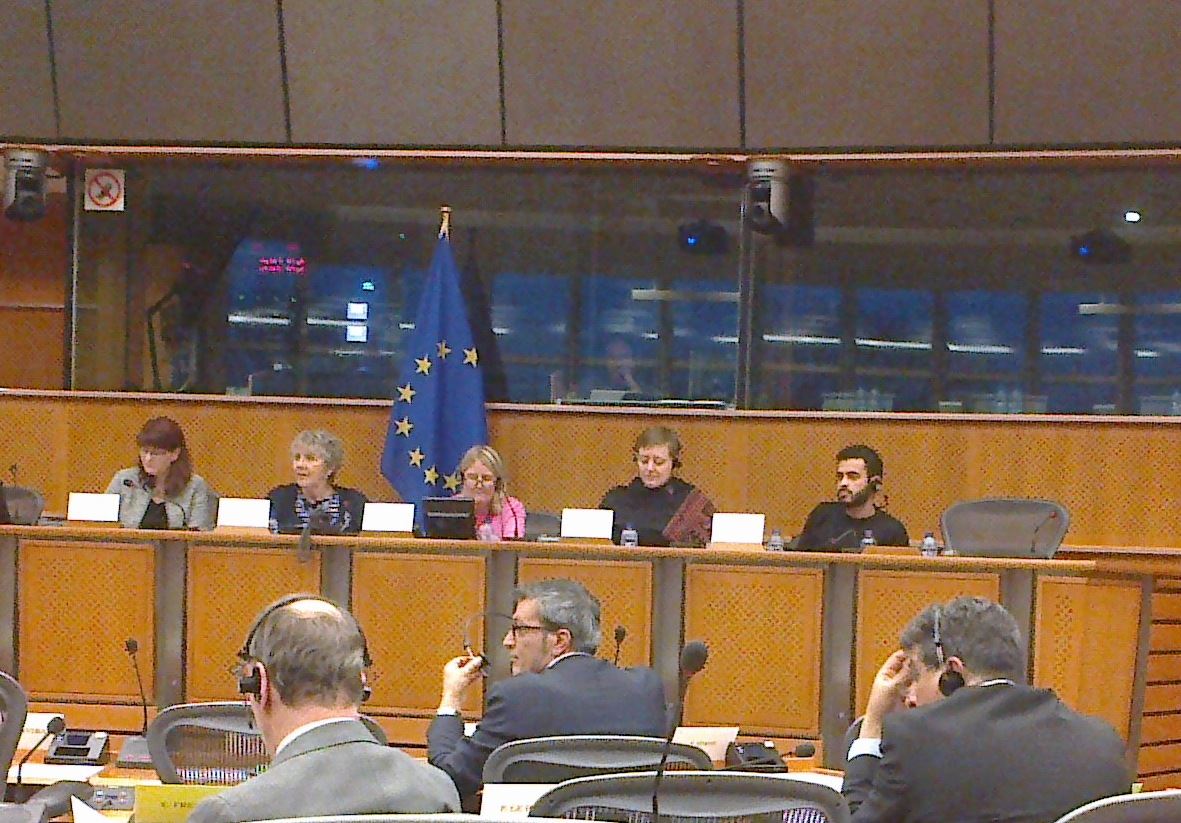 Samidoun representatives Charlotte Kates and Mohammed Khatib spoke at an emergency session of the European Parliament’s Delegation for Relations with Palestine on Monday, 22 February 2016. The session was called to address the case of imprisoned Palestinian journalist Mohammed al-Qeeq on his 90th day of hunger strike.

The session was chaired by MEP Margrete Auken of Denmark; the chair of the delegation is MEP Martina Anderson of Ireland. The delegation traveled to Palestine on 8-12 February; the detention of Palestinian prisoners was one of the key issues explored in meetings with human rights organizations and officials.

Kates addressed the current situation of al-Qeeq, detailing the progress of his case, his experience of torture under interrogation, and his current state of detention in HaEmek hospital, denied family visits and transfer to a Palestinian hospital even as the Israeli high court labels his detention “suspended.” She discussed the systematic nature of Israeli administrative detention against hundreds of Palestinians – at present, approximately 690 Palestinians are held without charge or trial, as well as the role of Israeli military courts in the mass imprisonment of Palestinians. She discussed why “charge or release” is not a solution for Palestinians held in administrative detention, as there is no more justice to be found in occupation military courts that convict over 99% of the Palestinians who appear before them. 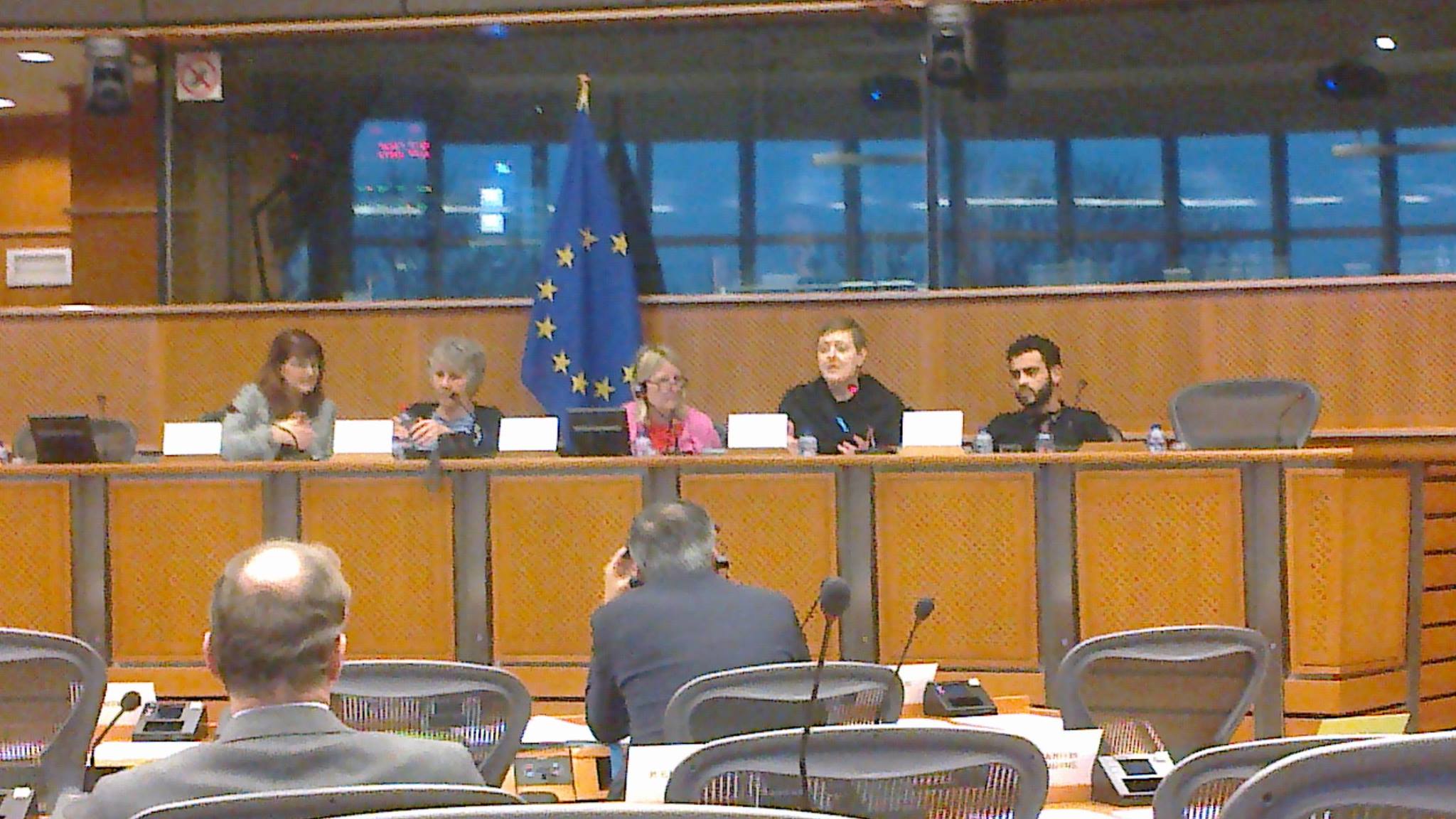 Khatib addressed the origins of administrative detention in Palestine, noting that it was imposed by the British mandate over Palestine and then incorporated into Israeli occupation law as an ongoing colonial practice. In addition, he discussed al-Qeeq’s role in the Palestinian prisoners’ movement and the Palestinian national movement, emphasizing that despite all concerns and discussions about Palestinian unity, all Palestinian political forces are unified around the call to free al-Qeeq and his fellow Palestinian political prisoners, and bring an end to administrative detention. Khatib also discussed the case of Omar Nayef Zayed, former Palestinian prisoner currently threatened with extradition from Bulgaria, as an urgent case of a Palestinian facing imprisonment with the full involvement of an EU member state.

Several members of Parliament emphasized the importance of taking urgent action on the case of al-Qeeq as his life is threatened at any time, including calling upon the European Commission to take substantive action. MEP Neoklis Sylikiotis of Cyprus emphasized the call to freeze the EU-Israel Association Agreement, and noted that his own parliamentary question to the European Commission on this matter had not been addressed; while MEP Edouard Martin of France also urged strong action from the EU, noting also the case of imprisoned Palestinian legislator Khalida Jarrar.

Kates and Khatib urged immediate action on the case of al-Qeeq and justice for Palestine more broadly, noting that the EU-Israel Association Agreement makes the European Union a partner in Israeli violations of Palestinian rights and Israeli occupation, calling for the agreement to be ended and suspended at a minimum; they emphasized the broad Palestinian call for boycott, divestment and sanctions and the need to answer that call with action, not repress the BDS movement as organizers are currently facing in France and elsewhere. Kates also noted that while the European Parliament ended its contract with G4S in a real victory for the call to boycott the corporation – that provides security equipment to Israeli checkpoints, prisons and police centers – other European institutions, including the Commission, continue to employ G4S, calling for those contracts to be cancelled.