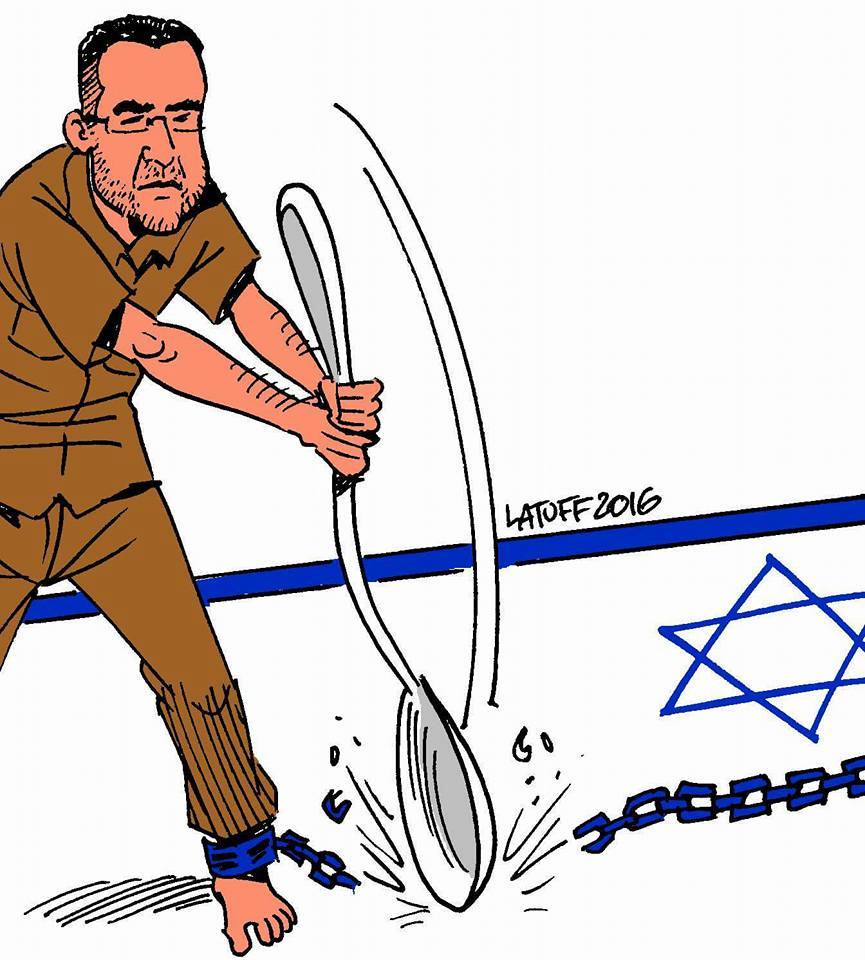 Hunger-striking Palestinian journalist Mohammed al-Qeeq is facing a severe risk of stroke, warned his lawyer Ashraf Abu Sneineh on 2 February. He has lost a massive amount of weight, and there is evidence of damage to internal organs of his body, Abu Sneineh said.

Al-Qeeq, 33, is a Palestinian journalist, a correspondent for Al-Majd channel, who is held without charge or trial in Israeli administrative detention. He launched his hunger strike on 25 November while being subjected to torture under interrogation; he has continued his strike since then in protest of his imprisonment without charge or trial. Held in HaEmek hospital in Afula, he is demanding his immediate release and is in critical condition.

Amnesty International, Reporters without Borders, and the European Union have all expressed serious concern for his case; on 2 February, Robert Piper, United Nations Coordinator for Humanitarian Assistance and Development Aid, said in a statement: “I am deeply concerned about the continued practice of administrative detention in Israeli jails and detention centers.”

“In particular, I am alarmed by the rapidly deteriorating health of Palestinian administrative detainee, Mohammed Al-Qiq, who is on hunger strike in protest against the arbitrary nature of his detention and ill-treatment,” Piper said.

Al-Qeeq’s case will be brought once again before the Israeli Supreme Court on Thursday, 4 February. The court previously declined to take any action on the case, instead asking for ongoing health reports from the hospital where he is held. Al-Qeeq has lost the ability to speak and 60% of his hearing.

Also on Thursday, Al-Qeeq will reportedly receive a visit from Dr. Mahmud Mahamid of Physicians for Human Rights – Israel. It was previously reported that this visit would take place two weeks ago, but on the day of the scheduled visit, the hospital denied Dr. Mahamid access to Al-Qeeq.

In a press conference on Thursday, 3 February, Fayha Shalash, Al-Qeeq’s wife and a fellow Palestinian journalist, highlighted the urgency of his situation as well as Al-Qeeq’s determination to continue. She noted that she has not been able to see her husband, nor has she been permitted to introduce photos of their children or books, including a Qur’an, for her husband in the hospital.

Palestinians in Gaza are participating in a six-day hunger strike in solidarity with Al-Qeeq in Gaza City, including former hunger striker Ayman Sharawneh and Palestinian journalists. They “called on Arab and European parliaments as well as human rights and journalism organizations to help free Qeeq from Israeli custody.”

A twitter campaign is planned for today, 3 February, to demand Qeeq’s release: http://samidoun.ca/?p=9409

3. Protest at an Israeli consulate or embassy (or federal building, G4S office or public square) and demand freedom for Mohammed al-Qeeq. Raise the issue of this case publicly and distribute information – this flyer is available for you to distribute at protests in your community. Find your closest Israeli consulate: http://embassy.goabroad.com/embassies-of/israel.  Please email us atsamidoun@samidoun.net to inform us of your action – we will publicize and share news with the prisoners.

4. Boycott, Divest and Sanction. Palestinians have urged an international boycott of Israeli goods and institutions – and corporations that profit from occupation , like G4S, the world’s largest private security company, that sells security equipment to Israeli prisons, checkpoints and police training centers – directly profiting from the occupation that destroys Palestinian lives. At the same time G4S profits from occupation, institutions like the United Nations continue to do business with it. Go to addameer.org/UNdropG4S to take action!