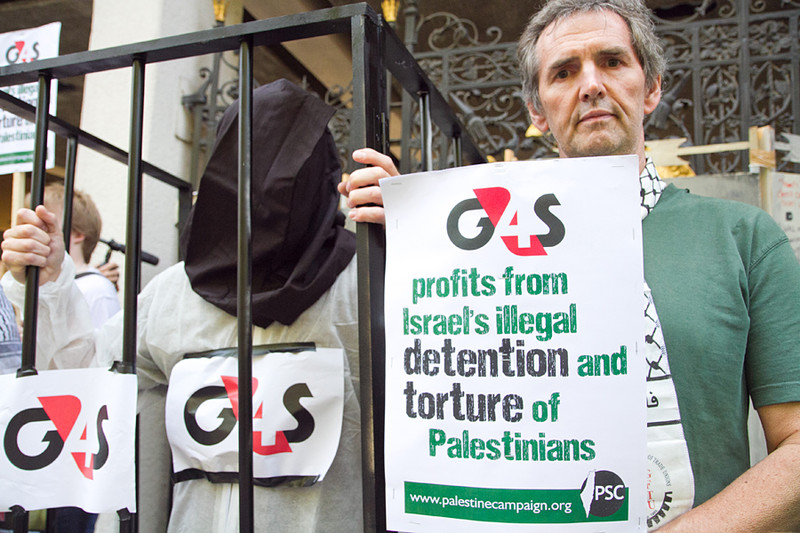 G4S, the British-Danish security conglomerate, announced on Thursday morning that it will sell its Israeli subsidiary, responsible for providing security equipment, control rooms, and surveillance devices for Israeli prisons, checkpoints, police training centers and military compounds that play a critical role in the imprisonment, oppression and colonization of Palestine and Palestinians. The announcement is a clear recognition of the growing strength and power of the international BDS (boycott, divestment, sanctions) movement targeting G4S in response to calls from Palestinian prisoners and civil society organizations.

This announcement comes following the loss of millions of dollars through boycotts – including contracts in Colombia and Jordan in recent weeks alone – and divestments, including that of the Gates Foundation’s $170 million stake in the company, after sustained international BDS campaigns highlighting G4S’ role in the incarceration, torture and oppression of Palestinians.

G4S reported a 40% fall in its pre-tax profits for a number of reasons, including a loss of contracts internationally. Its Israeli subsidiary employs 8,000 people and does $142 million in business annually.

In 2014, G4S announced that it would not renew its contract with the Israel Prison Service when it expires in 2017, following the loss of millions of dollars in business after a sustained international BDS campaign. That pledge came following previous pledges to “not renew” contracts at military checkpoints and West Bank Israeli occupation police stations.

But despite these pledges, G4S refused to pull out of the contracts and did not make formal written statements about ending its ties with Israel’s agencies of repression. In response, the international boycott movement targeting of G4S for its ongoing and active complicity with Israeli crimes has only escalated.

Today’s announcement is a clear victory for thousands around the world demanding G4S get out of occupied Palestine, for the Palestinian prisoners who urged a global boycott, and for the Palestinian people. It is a demonstration once again of the growing power of the BDS movement.

At the same time, just as with past G4S announcements, its complicity and responsibility for the imprisonment of Palestinians – including children – their torture in interrogation centers, the siege on Gaza, and the system of checkpoints that creates the matrix of colonial control continues.

Furthermore, G4S continues to be involved in human rights abuses not only in Palestine, but internationally. In the US, G4S is involved in detention and deportation at the US/Mexico border, as well as running privatized juvenile detention centers. Its privatized juvenile detention facilities in the UK, which it has also pledged to sell, have been exposed for abuse and neglect. G4S runs migrant detention centers in Canada, and provides security to the destructive Canadian tar sands and mining industries that are undermining communities and the environment on indigenous land, in North America and around the world.

In order to make sure that G4S’ pledges become reality, now is the time to escalate the global campaign to stop G4S: to demand the United Nations, European Commission, Canadian Air Transport Security Authority and other public agencies cancel their G4S contracts and build boycotts and divestments against this corporation profiteering from Palestinian misery.