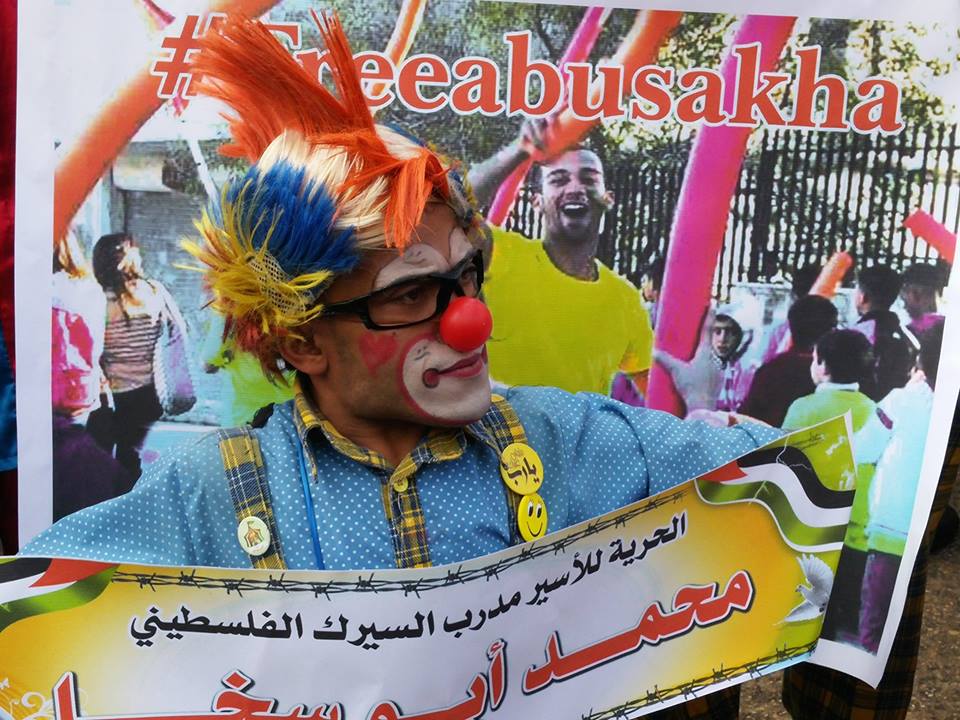 Mohammed Abu Sakha, imprisoned Palestinian circus performer and trainer, will appeal his administrative detention order on 21 March in an Israeli military court hearing on his imprisonment without charge or trial under secret evidence. Abu Sakha, 24, is a trainer and performer with the Palestinian Circus School who specializes in working with children with disabilities; he was arrested in December 2015 at a checkpoint by Israeli occupation soldiers as he traveled from his home in Jenin to the school in Bir Zeit.

There is an international campaign to free Abu Sakha; the Circus School he works with has partnerships with circuses and artists around the world. Amnesty International has called for his release in an urgent action; the European Union has expressed concern about his case. Protests in Toulouse, Brussels, Madrid, London, Heidelberg and elsewhere – often combined with creative performances – have called for his release, while circus and arts groups have petitioned on his behalf, among over 7,000 who have signed the online petition in support of Abu Sakha.

Abu Sakha had his first visit from his mother in prison last week, who issued the following statement following his visit (reported by the Palestinian Circus School):

Good evening to all! Yesterday I visited Mohammad for the very first time. I had mixed feelings between being proud and pained by the distance. At the same time I was very happy to share and feel with other parents whose children are held in prison for years. I experienced how parents get tired and insulted by the soldiers whose ages barely exceed 20 years old, shouting at older respectful people. Because we care about seeing our children, we force ourselves to put up with all the humiliation for the sake of a 40 minute visit that passes in a glimpse of an eye.. I told Mohammad about all the solidarity campaigns that you are all organizing, at first he was contemplated then he asked me to thank you all on his behalf. Mohammad told me he feels pained for all the children, only 12 and 13 years old, and the disabled people who are imprisoned. He says that they are the ones who deserve solidarity campaigns and manifestations. Human rights organizations should work for them. Even though he’s imprisoned, Mohammad still cares about fulfilling his mission to ease people, he turned the prison into a small circus, making shows and entertaining prisoners. He told me we force ourselves to believe that we are in a summer camp, not a prison so that days pass by quickly. I hope God grants them all freedom and he sends his greetings to all.

3. Organize a protest performance – or a simple leaflet distribution – in your community. Hand out the “Free Abu Sakha” leaflets  and help support freedom for an imprisoned Palestinian artist. Share it withSamidounand the Free Abu Sakha facebook.