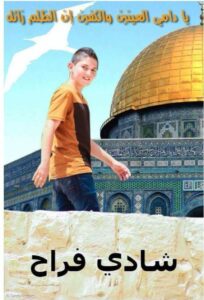 The family of 12-year-old Shadi Farrah, imprisoned in a detention center in Tamra, called for international attention and support from human rights organizations for the case of their son.

Farrah has been imprisoned, along with another Palestinian Jerusalemite child, Ahmad Zaatari, 13, since 30 December 2015. They were arrested by Israeli occupation forces and accused of being in possession of a knife and attempted murder based on possessing the knife.

Amjad Abu Asab, head of an East Jerusalem committee for prisoners’ families, said that both children were interrogated repeatedly without the presence of their parents or lawyers, in violation of law. Farrah’s parents noted that their son was in the seventh grade and an avid participant in dabkeh traditional dance. This comes amid the news of Ramzi Abu Ajamia, also 12 years old, a Palestinian refugee living in Dheisheh refugee camp near Bethlehem, currently in hiding from Israeli occupation forces. “I can’t explain why they want me, other than it’s my turn. Tomorrow it will be another kid’s [turn],” said Ramzi, in an interview with Middle East Eye. “Why should I give myself to someone who is going to hurt me. I know what they did to my brother and I won’t offer myself up for that,” he said. “I didn’t do anything, I don’t know what they want from me, and that means they will hurt me because I have nothing to tell them.” 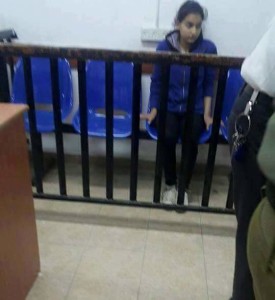 “Peace, mercy and blessings of God to you.
My beloved Mom, My dear Dad and brothers.
I miss you all. I want you to know that you are always with me. Do not worry about me, mother, I’m happy and don’t need anything except the knowledge that you are in good health.
Everybody here is taking care of me and helping me, I’m playing and studying, and the only thing I need from you is to know that you are OK.
I know that the prison gates can’t be closed forever
Mom — heart sticker — Dima
Say hello to Dad and my brothers, friends & relatives”

There are over 400 Palestinian children imprisoned in Israeli jails; Defence for Children International Palestine report that over 75% of them suffer mistreatment, torture and abuse under interrogation and imprisonment. The majority of Palestinian children are arrested in violent, late-night military raids that traumatize the targeted children and their entire families.