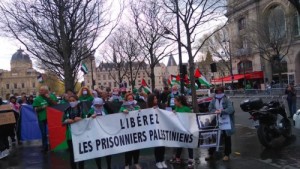 Organizers and activists in Paris commemorated Palestinian Prisoners’ Day with two events on 16 and 17 April saluting the struggle of Palestinian prisoners, urging their immediate release, and highlighting the case of Georges Ibrahim Abdallah, Lebanese Arab struggler for Palestine, in French prisons for 32 years.

On Saturday, 16 April, hundreds of people participated in a demonstration calling for freedom for Palestinians, organized by CAPJPO-EuroPalestine with other organizations, including Droits Devant, Children of Palestine, Palestine Nanterre, Saint-Ouen Palestine, Friends of Nablus, Collective for the Liberation of Georges Ibrahim Abdallah. 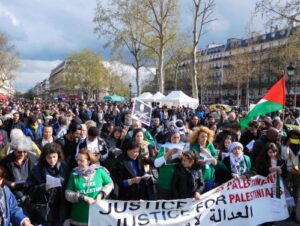 They marched from Place du Chatelet to Place de la Republique, where they where they found wide support among large numbers of young people, students and others participating in the ongoing “Nuit Debout” gathering. The event included street theater; marches and chants for the boycott of Israel, justice for Palestine, and freedom for Palestinian prisoners and for Palestine; and speeches on the Palestinian struggle. Organizers also set up exhibitions with information on Palestinian prisoners, as well as on Israeli opposition figures. 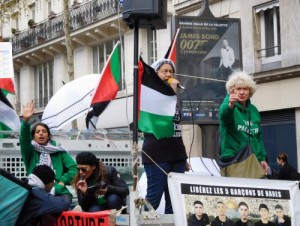 On Sunday, 17 April, the Academy of Arts and Culture of Kurdistan hosted a day of solidarity with Palestinian prisoners, organized by the Campaign for the Liberation of Georges Ibrahim Abdallah with other organizations, including the organizers of the previous day’s protest.

Mohammed Khatib of Samidoun spoke on the panel, highlighting the role of the Palestinian prisoners’ movement in the Palestinian national movement, and the leadership from behind the prison walls. He discussed recent attacks and arrests of Palestinian students and 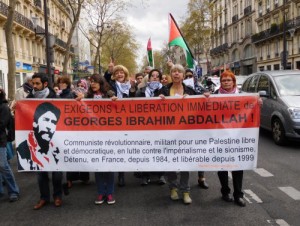 youth intended to crush the growing intifada on the streets of Palestine. He emphasized that the struggle to free Georges Ibrahim Abdallah is one struggle with that to free Palestinian prisoners, and the necessity to build a broader movement for Palestine and its imprisoned strugglers for freedom.

He was joined on the panel by Jean-Louis Chalanset, lawyer for Georges Ibrahim Abdallah, and a representative of the BDS France campaign, struggling against criminalization in France and for justice in Palestine. The event also included the screening of a film by Anna Riche, “Prison, visages de Palestine.”