The following article is reproduced in full from Free Haifa, highlighting the case of Palestinian poet from occupied Palestine ’48, Dareen Tatour, facing imprisonment and persecution for poetry and public political writing. On 13 April, the Israeli court in Nazareth set the next hearing in Tatour’s case for 8 May, following lengthy discussion of her Arabic poetry, awkwardly translated into Hebrew. Arrested on 10 October 2015 and accused of “incitement” for posting on Facebook amid the rising Intifada and the shooting of Palestinian woman Israa Abed by Israeli police, Tatour has been confined in a Tel Aviv apartment under house arrest since 13 January after three months of imprisonment. 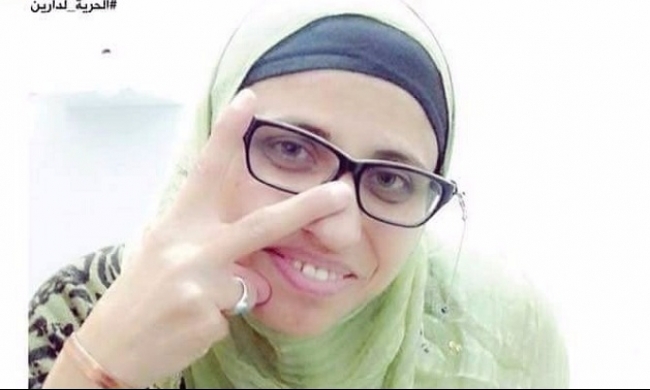 At 3:00am before dawn, on October 10, 2015, patrol cars from Nazareth police, escorted by a unit of Israel’s notorious “Border Guards”, surrounded a quite house in the nearby village of Al-Reineh. They broke in and waked up the terrified family. Their target was Dareen Tatour, 33, a Palestinian poet, photographer and activist. They didn’t have a search order, neither an arrest warrant, but they carried the astonished Dareen with them anyway.

Who is a martyr?

October 2015 saw a wave of mass struggle by the Palestinians, centered in Al-Quds as response to Israeli provocations in Al-Aqsa, but spreading throughout Gaza, the West Bank and the 48 occupied territories. But Dareen didn’t expect to be arrested. She didn’t take part in the demonstrations this time. She used to go to demonstrations before and as a photographer was targeted by the police. She was wounded in 2008, as settlers and police attacked the March of Return in Saffuriya. But why now?

Apparently the immediate reason for Dareen’s detention was a status that she published on Facebook. On October 9 a Palestinian woman from Nazareth, Israa Abed, a mother of 3 and a post-graduate student of genetic engineering, was shot by Israel soldiers in the central bus station in ‘Afula, on her way home from her studies. The films of her cold-blooded shooting by several Israel soldiers were published everywhere. The Arab public was shocked. According to the Israeli police Dareen posted Israa’s picture and wrote “I will be the next martyr”.

For the Israeli racist regime, media and public every Palestinian that is shot by the Israelis is immediately defined as “Mekhabel” – a special term invented in Hebrew to de-humanize Arab resistance fighters, not even describing them as regular “terrorists”. While every single Arab that looked at the film saw clearly that Israa didn’t attack anyone, and concluded that any Arab now can be shot for no reason, the Israeli media hysterically interpreted the same incident as a proof that any Arab can be “Mekhabel”. (Luckily Israa didn’t die from her wounds and Israel later dropped any “security” accusations against her.)

For the Israelis any Palestinian “martyr” (Shahid) is a suicide bomber. For the Palestinians not only freedom fighters but every innocent victim of the occupation is a Shahid. In this bloody period Dareen was identified as an enemy and can be regarded lucky to be arrested and not shoot at and actually becoming Shahida, like so many others.

The case against Dareen

Having Dareen in their custody, with her computer and smartphone, the best brains of the Israeli police in Nazareth worked hard to prove that she is a real security threat and stitch a file against her. On Monday, November 2, Dareen was indicted on charges of incitement to violence and supporting a terrorist organization. (I didn’t see the official indictment, but here are media reports about it in Arabic and Hebrew.)

The main clause of the indictment is based on a poem that she (or somebody else using her name – the case is still in the court) published in “youtube” under the title: “Qawem ya sha’abi, qawemhum” – “resist my people, resist them”. There is nothing illegal in this poem, not even according to Israel’s anti-democratic laws. But the poem is read against a background of Palestinian youth clashing with the occupation forces. The Israeli prosecution and media now relate to such iconic images as “Palestinians engaged in terrorist activity”!

Another main clause in the indictment relates to an item from the news, cited in a post on Dareen’s Facebook page, according to which “The Islamic Jihad movement calls for continuing the Intifada all over the (West) Bank…” The same post calls for “comprehensive intifada”. You can argue what this call for intifada means, but there is no support for Islamic Jihad there. The same report could appear, using exactly the same language, in an Israeli media… But Palestinians are always suspected of not really loving their oppressors.

The harshest part of Dareen’s saga started after the indictment. In some similar cases, only involving some mild posts on Facebook, the accused were transferred to house arrest as the trial went on.

The prosecution in Nazareth fought a trench war to extend Dareen’s detention as long as possible. They wouldn’t agree to house detention in her parent’s home and demanded that she will be deported far away from the district altogether. This doesn’t make any sense, as all the charges against Dareen related only to publications on the net, where geography is not relevant. But at this stage they already inflated the case against Dareen as their main crusade to guard “the security of the region”. And in Israeli courts the word “security” transforms almost any judge to an obedient stamp carrier at the service of the prosecution.

The prosecution went on to demand that Dareen will be held in a house that is isolated from the internet, under the supervision of volunteer guards that should be with her for 24 hours a day and pay a high penalty in case of any infringement. They objected to any specific proposal that met these harsh conditions and appealed to the district court over any decision of the low court that seemed a bit lenient toward Dareen.

As a result Dareen spent more than 3 months in different prisons, suffering harsh conditions and attending endless court hearings. Finally she was transferred (on January 14, 2016) to detention in a house that her brother rented especially in a remote suburb of Tel Aviv. She is not allowed to exit the small apartment at any time. An electronic device attached to her ankle is supervising her movements, in addition to the hapless “guards”.

The first hearing of the trial

On Wednesday, April 13, I went to Nazareth to attend the first hearing of Dareen’s trial. The small supporting crowd included some of Dareen’s relatives as well as Muhammad Barakeh, the head of the Arab High Follow-up Committee (the official united leadership of the 48 occupied Palestinians) and Knesset member Haneen Zoabi.

The prosecution started to rest their case by bringing the policemen that translated the “Qawem” poem to Hebrew. The scene was completely surrealistic. Poems, by their very nature, are contradictory to the concept of “proven beyond reasonable doubt” that stands at the heart of the criminal law. The (policeman) witness was struggling with the ambiguities of the poem’s words, supplying his intuitive interpretation to the phrases. We were torn between the urge to laugh loudly and bewilderment at the knowledge that the freedom of our dear Dareen depends on this nonsense.

The fact that the prosecution and the judge continued to discuss seriously the supposed incitement in the poem is only another demonstration of the way the Israeli oppressive apparatus is blinded by its own hatred and lies. But the lack of any semblance of justice and the zero value that they give to the basic Human Rights of the Palestinians is even more blatantly proved by their careless decision to use as translator a policeman with no special competence at translation. He testified breezily that his competence was based on studying literature at high school and his love for the Arab language. They are confident they can rob Dareen of her freedom according to an interpretation of her poem without even caring to bring a proper translator!

(If you read Hebrew you can read a detailed report about this amazing literary experience.)

The case of Dareen Tatour is just another small example of Israeli oppression against the Palestinians. Till now I don’t know of any specific solidarity actions with her, nor inside Palestine, neither abroad. This is understandable, taking into account that Palestinians of all ages are shot and killed every day, there are thousands of Palestinian prisoners (many of them children) and many hundreds are held in prison for years without any trial.

Yet I think that the case of Dareen deserves special attention.

She is a woman and a poet. The main accusation against her is her poem. This is a good opportunity for poets and writers to make a stand against the occupation and its practice of criminalizing any Palestinian expression of the desire for freedom and dignity.

Also, Dareen’s lawyer, Abed Fahoum, raised in court the principled issue of discriminatory enforcement of the law against incitement. Israeli social and official media is boiling with calls to kill Arabs, some by prominent politicians and rabbis. The racist attitude of the prosecution, going exclusively against the freedom of expression of the Arab population while turning a blind eye to Zionist incitement, should be exposed. Pursuing this line of defense is a major interest of the Palestinian Arab public in general. Dareen and her lawyer will need all the help they can get during the next few weeks in the court and out of it to make this point heard.