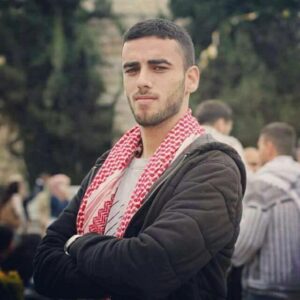 Quzmar, a leftist student and active organizer at Bir Zeit University with the Progressive Democratic Student Pole, was detained by Palestinian Authority security forces as he returned home from university on 12 May. His detention was then extended for an additional 15 days for interrogation and investigation regarding social media postings.

Quzmar was previously attacked by PA security forces for protesting against Palestinian Authority officials’ meetings and negotiations with Israeli leaders and officials, and had been summoned on multiple occasions for interrogation by PA intelligence.

The Palestinian Authority security forces engage in “security coordination” with the Israeli occupation forces, sharing intelligence and information with Israeli officials. PA President Mahmoud Abbas has boasted of the effectiveness of security coordination in undermining the intifada, while the Israeli occupation forces have praised PA officials for arresting Palestinians allegedly involved in resistance.

The Popular Front for the Liberation of Palestine, the Palestinian leftist political party, demanded Quzmar’s “immediate and unconditional release as well as that of all political detainees and prisoners of security coordination in PA jails.” The PFLP further denounced “the policy of the attacks on students by PA security services which have escalated in recent weeks amid campus elections. This method of police repression against Palestinian students not only widens Palestinian internal division but also endangers the lives of students and political detainees in light of the actions of the occupation in arresting former PA detainees in the context of shared intelligence and security coordination.”

Students from various political and student groups, including leftists like Quzmar and members of the Islamic Bloc at Palestinian universities, are among the PA political detainees. Also among their number are five young Palestinians detained by the Palestinian Authority following reports of their torture under interrogation. As Samidoun noted at the time, “the context of these arrests is that of ongoing PA security coordination with the Israeli occupation. These young men are not a threat to Palestinian security; they are well-known, beloved members of their community and trusted strugglers for the freedom of the Palestinian people.”

UPDATED: Facebook friends of Kifah Quzmar have highlighted the post below as the reason for his arrest. The English translation of the text below is “Do you know why the mukhabarat (intelligence service) is a rotten agency? Because the entire PA is rotten. Seif al-Idrissi is under arrest! #Freedom for Seif (hashtag)” Seif al-Idrissi is a friend of Quzmar, also detained by the PA, in the photo with Quzmar below: 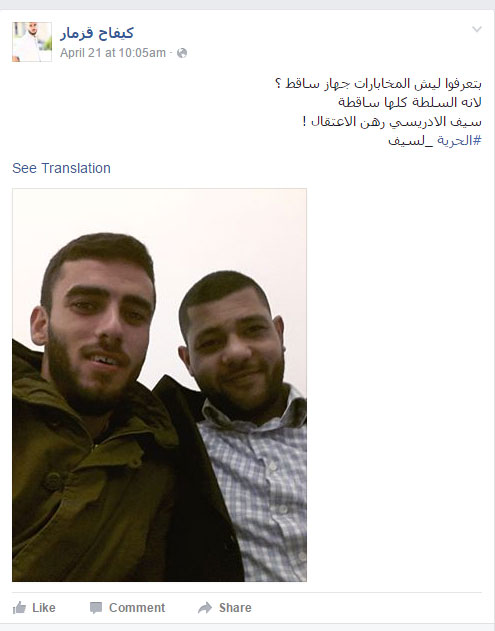