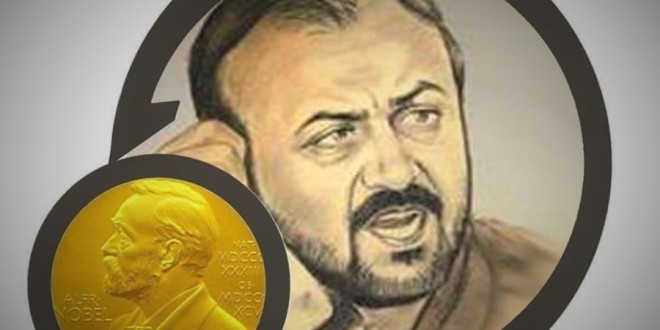 Archbishop Desmond Tutu joined the campaign to nominate imprisoned Palestinian leader Marwan Barghouthi for a Nobel Peace Prize, writing to the Nobel Committee on 6 June in support of Barghouthi’s nomination.

Barghouthi, a leader in Fateh who, along with Popular Front for the Liberation of Palestine General Secretary Ahmad Sa’adat, is one of the most prominent Palestinians in Israeli jails, was first nominated by Nobel laureate Adolfo Perez Esquivel, Argentine human rights activist who was awarded the Nobel Peace Prize in 1980.

The Tunisian Quartet, who were awarded the Prize in 2015, chose to dedicate their prize to Barghouthi at an event in Tunisia marking Palestinian Land Day.

Tutu – the 1984 Nobel Peace Prize laureate – is world-renowned for his struggle against apartheid in South Africa. Tutu has been a consistent supporter of Palestinian rights and justice for Palestine, supporting the campaign for boycott, divestment and sanctions against Israel.

Along with other prominent South African leaders like Ahmad Kathrada, Tutu has been a longtime supporter of the campaign to free Marwan Barghouthi and the 7,000 other Palestinian prisoners.

I hereby nominate the imprisoned Palestinian leader, Marwan Barghouthi, for the Nobel Peace Prize. Marwan Barghouthi was first imprisoned when he was 15 years old, and has spent over two decades of his life in Israeli jails. He was the first Palestinian parliamentarian to be abducted in 2002. Many of his colleagues would follow with nearly half of the members of the Palestinian Legislative Council being arrested in the last decade. These arrests against elected representatives constitute a blatant attack against the Palestinian nation, democracy and rights.

Israel has arrested since 1967 over 850,000 Palestinians in the most striking example of mass arbitrary arrest in contemporary history. It has arrested leaders, militants, academics, journalists, children, women, the elderly and human rights defenders in an attempt to break the will of an entire people striving for freedom and independence. The 7,000 Palestinian prisoners in Israeli jails today are a reflection of the imprisonment of a nation and the negation of its rights, through occupation, oppression and siege. The freedom of the Palestinian prisoners is a pre-requisite for the freedom of the Palestinian people.

The nomination of Marwan Barghouthi, a symbol of the Palestinian people’s struggle for freedom, constitutes a clear signal of support for the realisation of the Palestinian people’s inalienable rights, including to self-determination. There is an international consensus around these rights but there is a need to support them through symbolic and practical steps that would precipitate the end of the occupation as an indispensable step to achieve peace. Marwan Barghouthi has fought for freedom and peace and has formulated the correlation between these two struggles by stating that the last day of this Israeli occupation will be the first day of peace. He has drafted from behind bars the prisoners’ document signed by Palestinian leaders from across the political spectrum, which constitutes till today a basis for the efforts towards national reconciliation enjoying wide national consensus, as well as a political programme to achieve unity, freedom and peace. Marwan is also an active advocate and defender of democracy and human rights, including women rights, and of pluralism, both religious and political, in a region and a world that desperately needs such advocates.

Palestine will soon be commemorating 70 years since the Nakba, which lead to the dispossession and displacement of the Palestinian people, as well as the negation of their rights. Palestine remains today a symbol of the international community’s failure to assume its obligations to respect, and ensure respect for, international law and to achieve international peace and security. I call on the members of the Norwegian Nobel Committee to seize this occasion to bring attention back to the question of Palestine and to the calls for a just and lasting peace, a prospect Marwan Barghouthi continues advocating and acting for, despite years of imprisonment and isolation.

In 2013, an International Campaign for the freedom of Marwan Barghouthi and all Palestinian prisoners was launched by one of the icons of our struggle against apartheid, Ahmed Kathrada, from the cell of the universal symbol of freedom, Nelson Mandela, on Robben Island. I decided to support this Campaign alongside 7 other Nobel Peace Prize laureates as a reflection of our belief that freedom was the only path to peace. This Campaign was also endorsed by 115 governments around the world, over 15 former heads of states and governments, parliamentarians, artists and intellectuals, academics and human rights organisations, as well as thousands of citizens across the globe. This wide international support will gain new momentum if Marwan is granted the Nobel Peace Prize.

I hope the Nobel Committee will take a bold decision bringing us closer to the day this holy land, charged with unique symbolic value, can stop being a living testimony of injustice and impunity, occupation and apartheid, and can finally be a beacon of freedom, hope and peace. God Bless You.