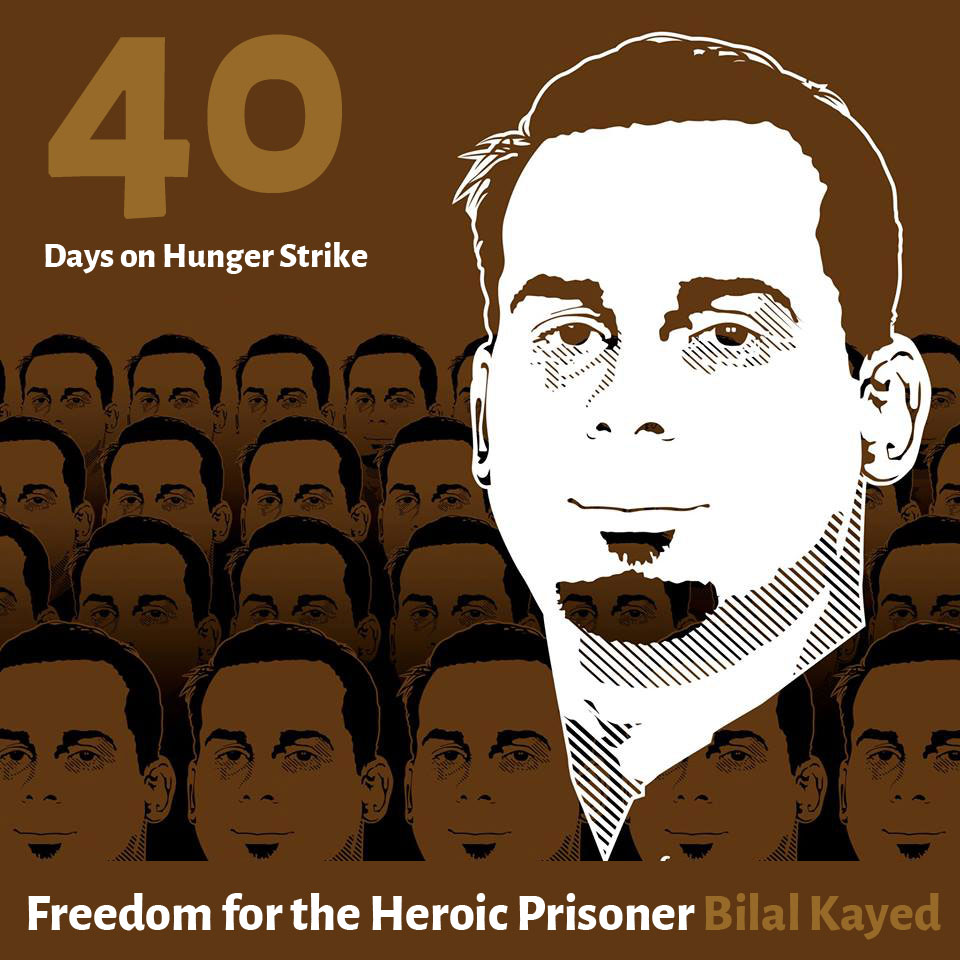 Palestinian prisoner Bilal Kayed has now been on hunger strike for 40 days. Shackled hand and foot to his hospital bed in Barzilai Hospital, Kayed has consumed only water for the duration of his strike; he rejects all supplements, salts, and medical examinations. His lawyer, Farah Bayadsi of Addameer Prisoner Support and Human Rights Association, reports that he suffers from pain in his eyes, extreme fatigue and exhaustion, and a further deterioration of his health condition. At the same time, he continues his strike with firm determination “as if he is beginning his strike for the first day.”

Dozens of fellow Palestinian prisoners have joined his open hunger strike in rejection of his imprisonment without charge or trial under administrative detention after completing his 14.5 year sentence in Israeli prisons. In 2001, he was arrested for membership in the Popular Front for the Liberation of Palestine and involvement in the Palestinian resistance in the second Intifada. 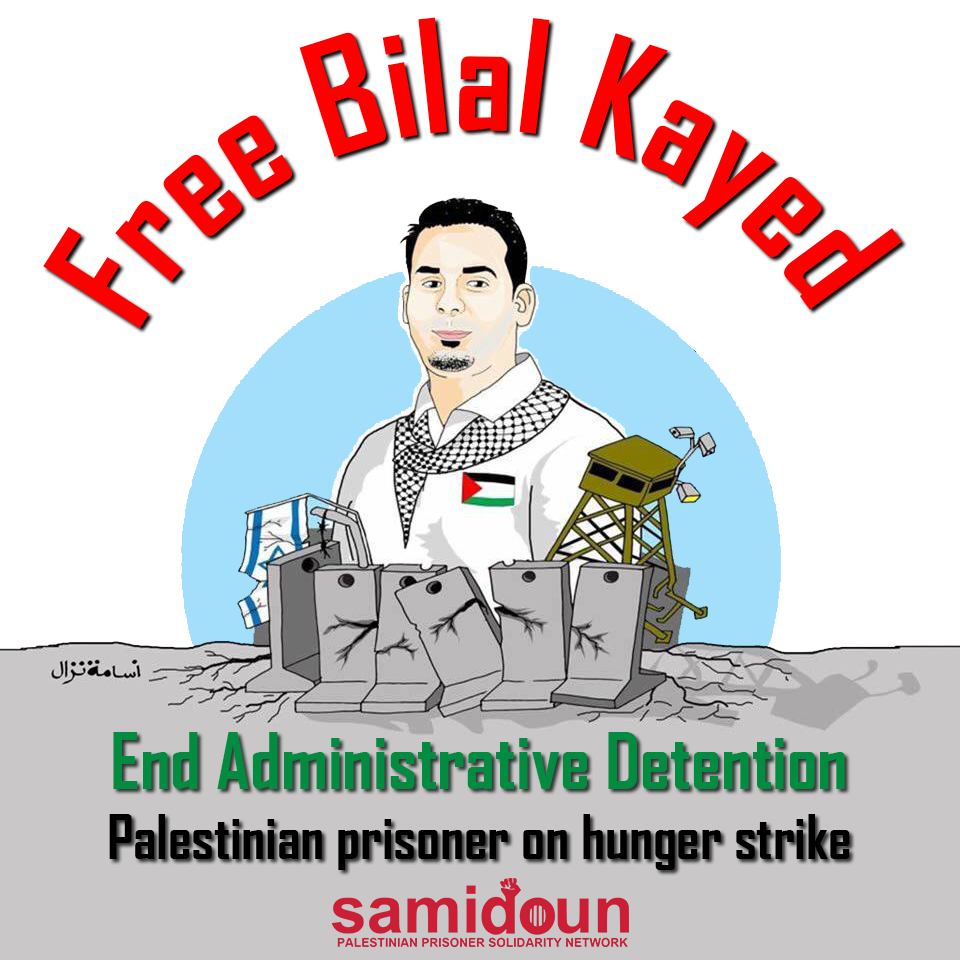 On 13 June 2016, rather than being released as scheduled, Kayed was instead ordered to six months imprisonment without charge or trial under administrative detention. His case is seen as threatening a dangerous precedent for all Palestinian prisoners of imprisonment without charge or trial, indefinitely renewable, after the expiration of lengthy sentences.

Kayed was born on 30 November 1981 in Syria to Palestinian parents from the West Bank of occupied Palestine; his father was part of the Palestinian resistance in Lebanon. When his family returned to Palestine in the mid-1990s, he studied at the Qalandiya Technical Institute and became a refrigeration technician.  As the second intifada began, he joined the Palestinian security forces, where he guarded Palestinians under threat of Israeli assassination, including Mahmoud Abu Hanoud, who was later killed by an Israeli air force missile attack. Imprisoned on 14 December 2001, he became a leader inside prison who participated and worked with other political parties to coordinate hunger strikes and protests within the prison. He was heavily involved in the 2012 collective Karameh hunger strike and other actions of the prisoners’ movement. The arbitrary detention of Kayed also appears to be a form of retaliation for his leadership and activity inside the prisons.

The Palestinian Prisoners’ Movement, consisting of all Palestinian political parties and factions in Israeli prisons, has pledged its full support for Kayed’s strike and its participation in escalating protests inside the prisons. Dozens of prisoners are on open hunger strike while hundreds more have returned their meals on a partial basis; many more have answered morning roll call with “Bilal Kayed” rather than their own name or number. Outside prison, former hunger strikers and prominent leaders like Khader Adnan, Mohammed al-Qeeq, Muhammad Allan, and Bilal Diab, have played a prominent role in leading and participating in protests for Kayed’s release. 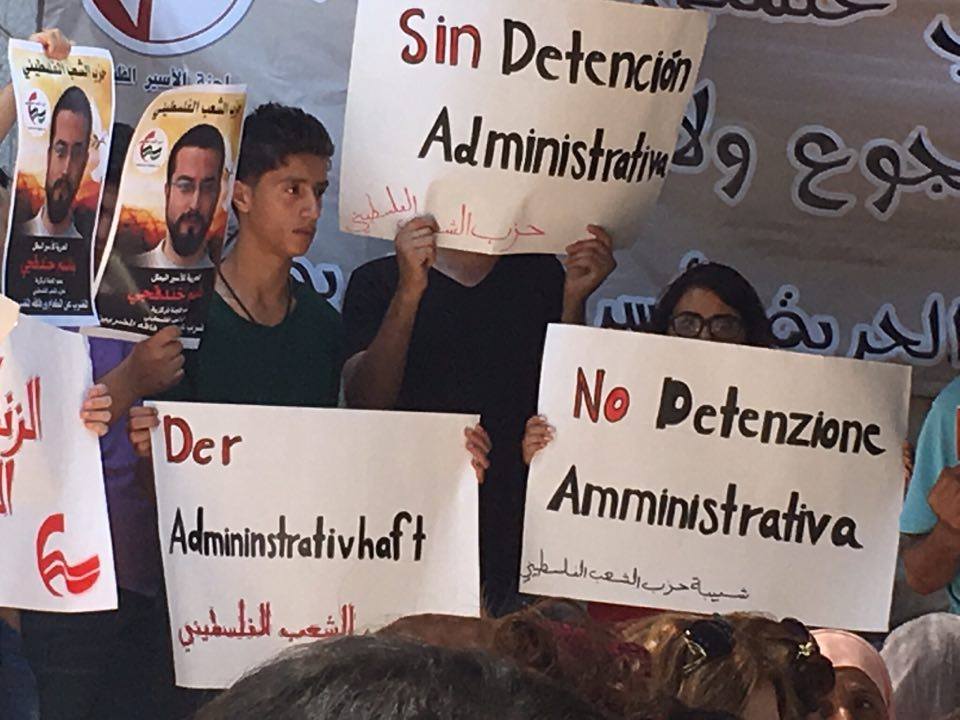 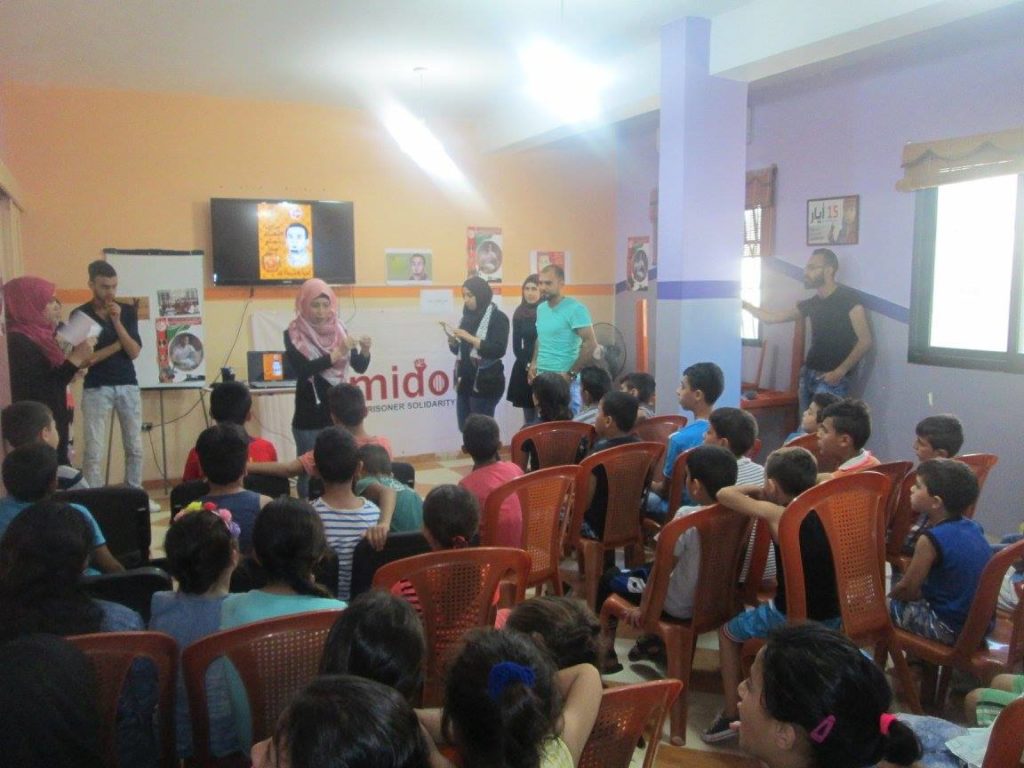 In Lebanon, Samidoun along with the Palestinian Youth Organization has launched a Youth Campaign to Free Bilal Kayed. The new Youth Campaign has organized a series of lectures and events in Ain el-Helweh refugee camp, including presentations to children and youth about Bilal Kayed and the struggle of the Palestinian prisoners inside occupied Palestine. The Youth Campaign is holding a vigil this evening, 24 July, outside the hospital in Ain el-Helweh, in solidarity with Kayed.

Internationally, many cities are organizing events, actions, and protests for the 20-30 July global days of solidarity with Kayed’s strike. Protests, events and actions are being organized in Brussels, Berlin, New York, London, Cagliari, Lysekil, Philadelphia, Cairo, Athens, Manchester, Malmo, Milan, and elsewhere. New York City Students for Justice in Palestine have joined Arab students from Tunisia, Egypt, Morocco, Iraq, and elsewhere in responding to the Progressive Student Labor Front‘s call for a World Student Day of Solidarity with Bilal Kayed and Palestinian Prisoners on 25 July. Inside Palestine, a youth and student delegation from Belgium associated with Comac, the youth movement of the Workers’ Party of Belgium, visited the family of Bilal Kayed in Asira al-Shamaliya to express their solidarity. 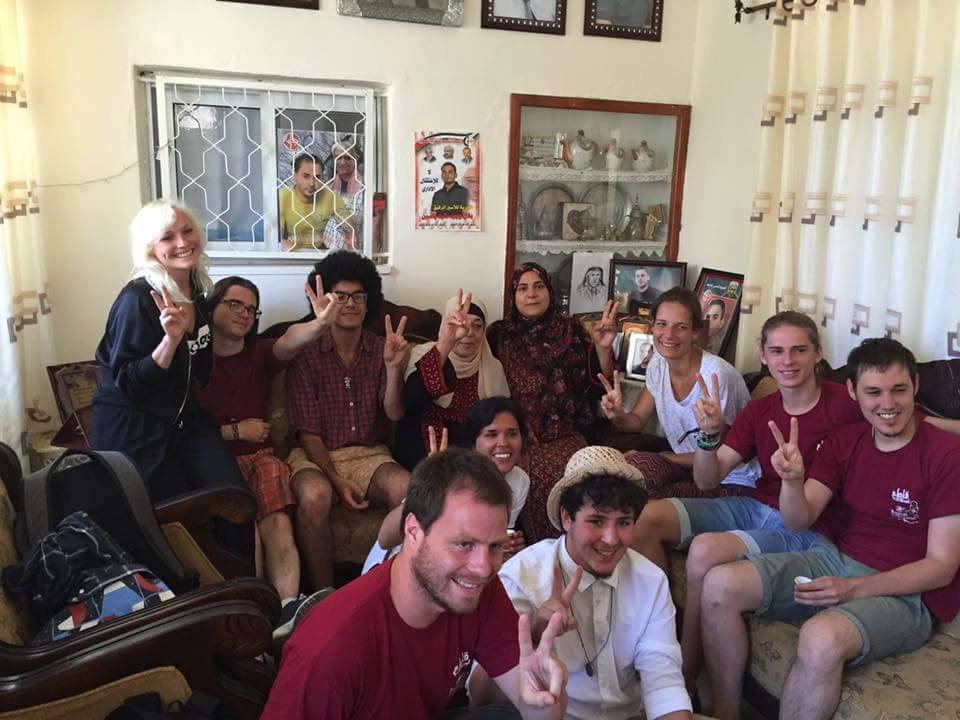 Bilal Kayed is not alone on hunger strike inside Israeli prisons. Fellow administrative detainees Mohammed and Mahmoud al-Balboul, brothers, have been on hunger strike for 19 days against their imprisonment without charge or trial; Ayad Herama, Muhannad Mutahna, and Malek al-Qadi are also on hunger strike for one week against their detention without charge or trial. Dozens of Palestinian prisoners, mostly associated with the Popular Front for the Liberation of Palestine, Kayed’s comrades, but also including prisoners from Fateh, Islamic Jihad, and the People’s Party, have been on strike for the past week demanding Kayed’s freedom.

Within the prisons, 29 new names of Palestinian prisoners were announced as part of the ongoing strike. (10 of the prisoners on the list have been on strike since earlier in the week, but their names were not previously announced.)

The newly named strikers include Kamil Abu Hanish and Wael Jaghoub, leaders of the PFLP in Israeli prisons, who are currently being held in isolation in Hadarim prison after they were seized and transferred from Ramon prison following the prison protests for Kayed’s release. The list, from Handala Center for Prisoners and Ex-Prisoners is, as follows, with each striking prisoner’s name, hometown, and prison: