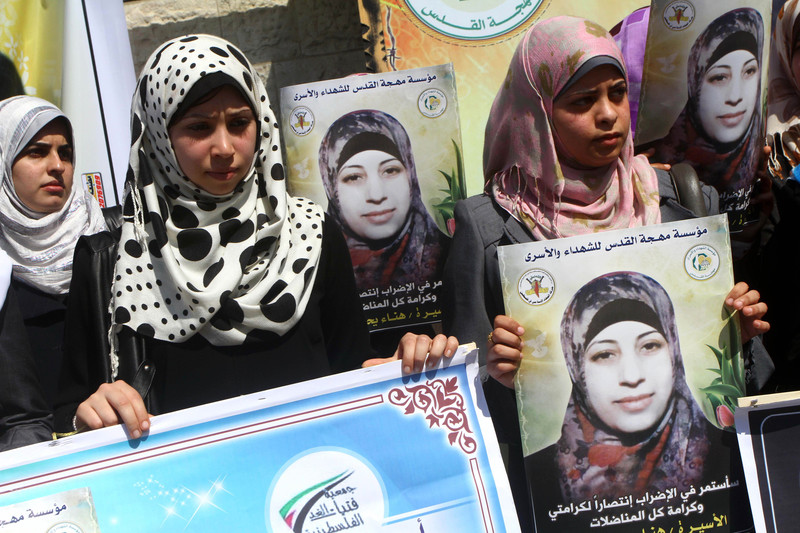 Palestinian women prisoners are held in HaSharon and Damon prisons, which are experiencing serious overcrowding and difficult conditions.

Noor Darwish, 22, imprisoned since 19 April, told Palestinian lawyer Hanan al-Khatib on Tuesday, 28 June that women prisoners are subject to harsh interrogations in the Moskobiya interrogation center, lasting for hours at a time and subject to constant threats. Hala Bitar, 19, from Jerusalem, also spoke about her interrogation in Moskobiya center and the poor conditions of confinement. Al-Khatib reported that the women prisoners particularly emphasized the difficulty of being transferred in the “Bosta” vehicle, a metal vehicle where prisoners are shackled to metal chairs. The vehicle is extremely hot in summer and cold in winter, and trips last hours and days due to frequent stops and delays.

The longest-serving woman prisoner is Lena Jarbouni, imprisoned since 17 April 2002. A Palestinian citizen of Israel, Jarbouni, from Akka, is the representative of women prisoners in HaSharon prison. She was accused of “aiding the enemy” (the Palestinian resistance in the second Intifada) and sentenced to 17 years imprisonment.

When Palestinian Legislative Council member and leftist leader Khalida Jarrar was released on 3 June, she emphasized the importance of working to free Jarbouni, who has acted as a “teacher” to fellow women prisoners, teaching Hebrew and advocating for education for imprisoned minor girls. “What is important also is Lena’s role in comforting and supporting the sisters and the comrades behind bars, and the special care that she provides for the imprisoned minor girls,” Jarrar said. “I cannot stress enough the importance of putting pressure in order to secure her freedom, and the freedom of all Palestinian women prisoners.

On Palestinian Prisoners’ Day, Jarbouni issued a statement to the Palestinian, Arab and international movements for justice:

“On Prisoners’ Day, I greet the Palestinian people and all of the free people of the world. Through these fifteen years, I have seen the passage of many families and prisoners since the date of my arrest, which coincided with Prisoners’ Day on 17 April 2002. Hundreds of women prisoners held behind bars have stood firm in the struggle, along with the sons of our people, confirming that the Palestinian women are struggling against the occupation and fighting for social justice, emancipation and equality in all spheres of life.

On this day, we salute the longest-serving prisoner Karim Younis, and all of the prisoners throughout Palestine, the Palestinian prisoners’ national movement, and the Arab prisoners, and we salute the child prisoners, boys and girls, sick prisoners, and those in solitary confinement and all of our steadfast people. We assure you that we are held as captives behind bars, but we are free in our minds, and in our convictions. Our freedom remains in our hope and our conviction in the freedom of Palestine.

With all love and greetings. Every year we are free.”