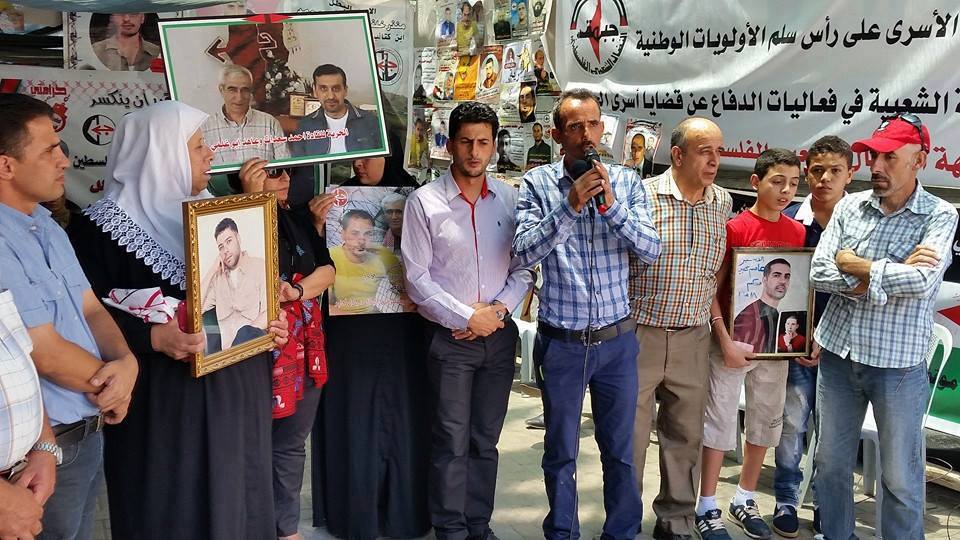 Palestinian prisoners in Israeli jails engaged in a one-day mass hunger strike on Thursday, 28 July in protest of the International Committee of the Red Cross’ cuts to prisoners’ family visits, from twice monthly to once monthly, a cutback that began in July 2016.

Palestinian prisoners and their families have engaged in a series of protests against the ICRC visit cutbacks, which mirror Israeli policies that seek to deny family visits and bar prioners’ family members from seeing them. Palestinians from the West Bank, excluding Jerusalem, must apply for special permits, a process facilitated by the ICRC, in order to visit their family members. These permit requests take months and are frequently denied; when visits actually take place, they are a full-day process with lengthy checkpoint waits, searches, hours in hot prison waiting rooms, and sometimes visit denials that take place on the spot.

The ICRC has justified this decision, claiming that budget cutbacks make it necessary and that some families do not participate in the second monthly visit. However, rather than advocating for an end to the onerous visit complications or the day-long trips for a 45-minute visit that are particularly difficult for elderly parents and young children, the visit cutbacks are taking place on the back of the most vulnerable and marginalized, imprisoned Palestinians and their families. While the visit cutbacks do not apply to imprisoned women and children, they continue to deny Palestinian women and children their rights to connect with their imprisoned sons, husbands, and fathers. Palestinian prisoners have emphasized that this action by the ICRC works hand in hand with the systematic Israeli policy of visit denial.

Palestinians from Jerusalem self-organized a visit trip to their family members in protest of the ICRC’s action, while prisoners in several prisons, including the Ramle prison clinic, refused to receive ICRC delegates. Four Palestinian prisoners, Ahmed Barghouthi, Mahmoud Sarahna, Ziad al-Bazzar and Amin Kamil, in Hadarim prison launched an open hunger strike against the visit cuts.

Samidoun has protested the visit cuts in New York and other cities and delivered a letter to the ICRC, calling on the institution to reverse its action. Protests throughout Palestine on Thursday highlighted the issue; at a rally in Nablus, Raed Amer of the Palestinian Prisoners’ Society called on the ICRC to roll back this damaging decision, while highlighting the hunger strikes of Bilal Kayed and his fellow prisoners, including Mohammed and Mahmoud al-Balboul, brothers on hunger strike for 24 days against their own administrative detention. Mahmoud Kayed, the brother of Bilal, on hunger strike for 44 days, spoke at the rally, denounced not only the visit cuts but also the silence of the ICRC on the ongoing crimes against Palestinian prisoners, including the situation of his brother.

At the protest in Ramallah, Issa Qaraqe, chair of the Detainees’ Affairs Commission, stated that there is a national consensus to reject these visit cuts as unacceptable. Abla Sa’adat, the wife of imprisoned Palestinian leader Ahmad Sa’adat, General Secretary of the Popular Front for the Liberation of Palestine, declared that the visit cuts only serve the interests of the occupation. Sa’adat was denied family visits for years under direct orders and security prohibitions against his family members.

The protests against the family visit cutbacks come alongside a growing mass hunger strike inside Israeli prisons led by Bilal Kayed, now on his 45th day of hunger strike demanding his freedom from administrative detention without charge or trial, imposed upon him after the completion of his 14.5-year sentence. Over 100 Palestinian prisoners have joined a hunger strike for his release and that of fellow striking administrative detainees Mahmoud and Mohammed al-Balboul, Malik al-Qadi, Mohannad Muhtana, and Ayed Harama, while hundreds more are participating in escalating protest actions within the prisons. There are over 7,000 Palestinian prisoners held in Israeli jails, and the visit cutback directly impacts the vast majority of the prisoners and their families.

Take Action!  Sign and share the change.org petition to the International Committee of the Red Cross urging them to change this decision. Palestinian prisoners and their families need support – not yet more roadblocks in the way of family life and family connections!