After 45 days of hunger strike, Bilal Kayed is continuing his battle for freedom from Barzilai hospital, where he remains shackled hand and foot to his hospital bed and guarded at all times by three prison guards. He continues to lose large amounts of weight and is dizzy and unable to walk, suffering extreme fatigue. He is consuming water with salt only following several incidents of prolonged loss of vision; he is rejecting all vitamin or other supplements and any medical examinations.

Osama Saadi, a member of the Knesset with the Joint List and a lawyer, visited Kayed yesterday, 28 July, in Barzilai hospital, as Palestinian citizens of Israel protested outside the hospital for Kayed’s freedom. Saadi reported that Kayed is shackled to his hospital bed by his right hand and left foot, noting that “I saw with my own eyes the determination and insistence of the imprisoned hero Bilal Kayed to continue the strike, to break the chains, and to win his justly-deserved freedom. He told me that he will continue his hunger strike until freedom, and sends greetings to all of the Palestinian people and their friends. He appreciates all of the activities of solidarity with him and his morale is very high, touching the clouds. Thus, we continue to emphasize solidarity with the prisoner Kayed until his release. This is a hero who refuses the injustice of the jailer and believes firmly in the justice of his cause. We must stand together with him as one, and celebrate together when he achieves his freedom.” 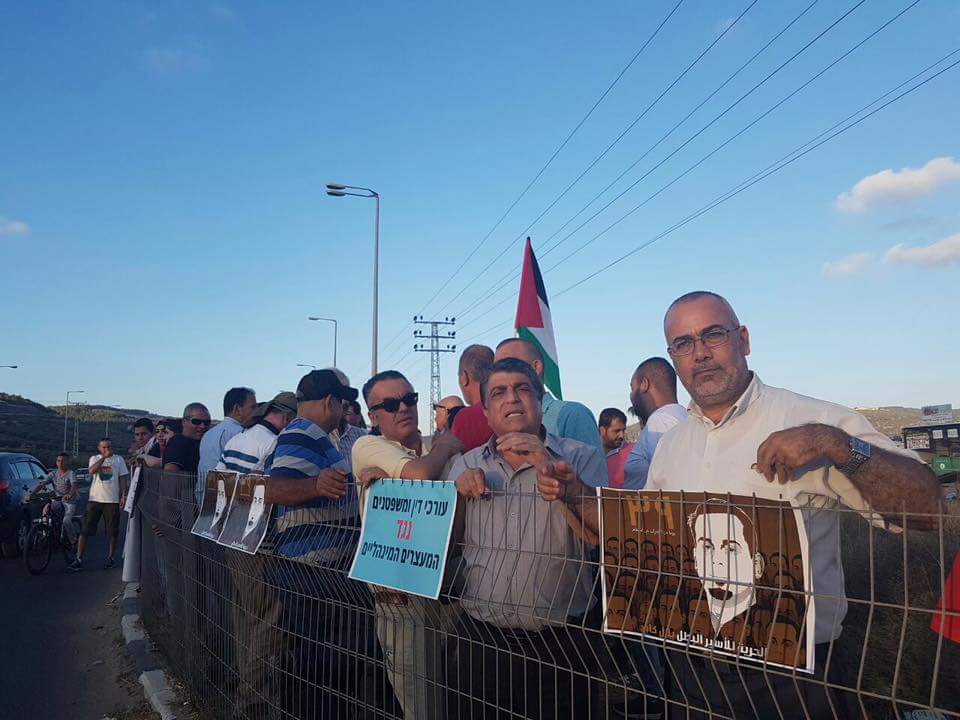 Over 100 Palestinian prisoners are refusing all food in solidarity with Kayed while hundreds more are engaged in ongoing protest actions and partial hunger strikes in support of Kayed and his fellow striking administrative detainees. Kayed, 34, has been on hunger strike since 15 June, when he was ordered to administrative detention for an indefinitely-renewable six-month period following the expiration of his 14.5 year sentence in Israeli prisons. His case represents a threat of indefinite detention following completion of their sentences for all Palestinian prisoners in Israeli jails. The growing protest movement has been met with repression, including invasions of cells, lockdowns, mass prison transfers, prohibition of family visits and access to the canteen (prison store), ransacking, confiscation and destruction of personal belongings and electronic appliances, and ongoing raids on cells by repressive forces. These raids and invasions have happened in Ramon, Negev, Gilboa, and Nafha prisons, while the hunger-striking al-Balboul brothers were beaten in Ofer prison.

Physicians for Human Rights Israel appealed on 22 July to the District Court in Beersheva against the shackling of Kayed to his hospital bed, stating thaat the shackling violates medical ethics, international medical guidelines, international human rights law, and Israeli ministry of health guidelines – and even the rules of the Israeli Prison Service. PHR also called for Kayed’s access to an independent doctor, urging “the international community to urge Israel to release Bilal Kayed immediately, to end the harsh, inhuman and degrading practices that pressure hunger strikers to end their strikes, and to review the continuous and systematic human rights violations of Palestinian prisoners and detainees, especially in regards to the policy of administrative detention.” The statement by PHRI was co-signed by Adalah – The Legal Center for Arab Minority Rights in Israel, Addameer Prisoner Support and Human Rights Association and The Public Committee against Torture in Israel (PCATI).

Protests have continued throughout Palestine and around the world, including in the Palestinian refugee camps in Lebanon, for Kayed’s freedom and in support of the struggle of the prisoners. 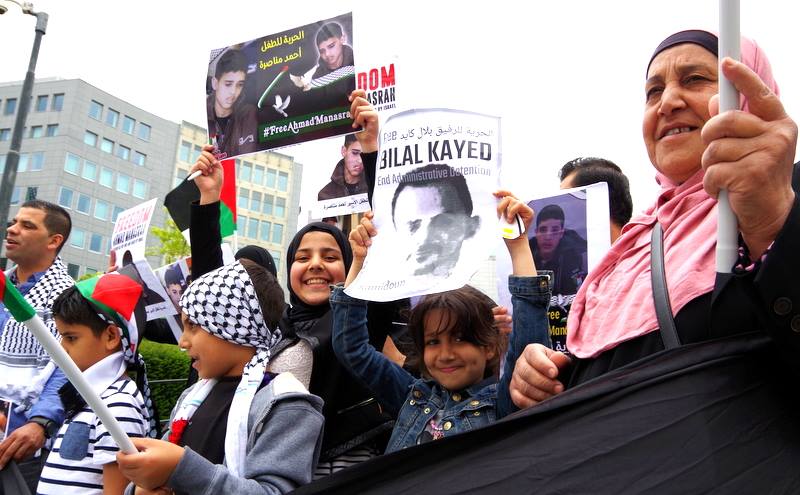 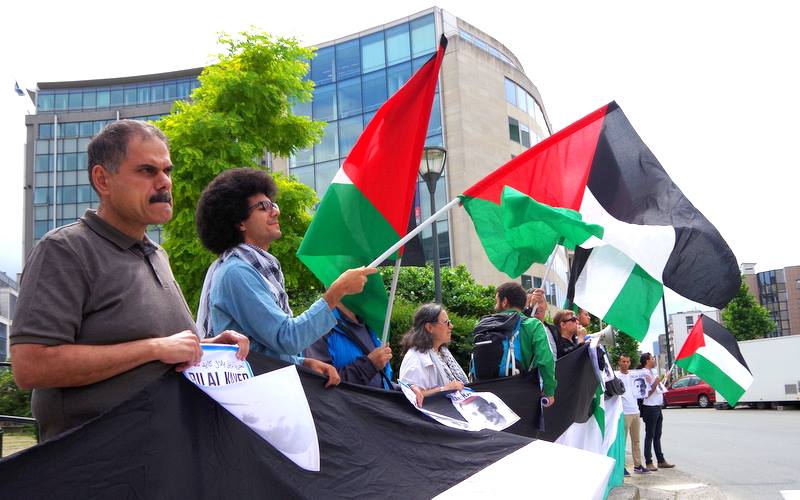 On Wednesday, 28 July, protesters gathered in Brussels for a rally outside the offices of the European Commission to demand an end to European complicity in the imprisonment of Palestinians. At the protest organized by Samidoun, the Palestinian Community of Belgium and Luxembourg, and the European Alliance in Defence of Palestinian Detainees, speakers from a number of organizations demanded freedom for Kayed and his fellow Palestinian prisoners. The rally also included a statement from the family of Omar Nayef Zayed, the former Palestinian prisoner whose life was taken in the Palestinian embassy in Sofia as he resisted extradition from Bulgaria to Israel. 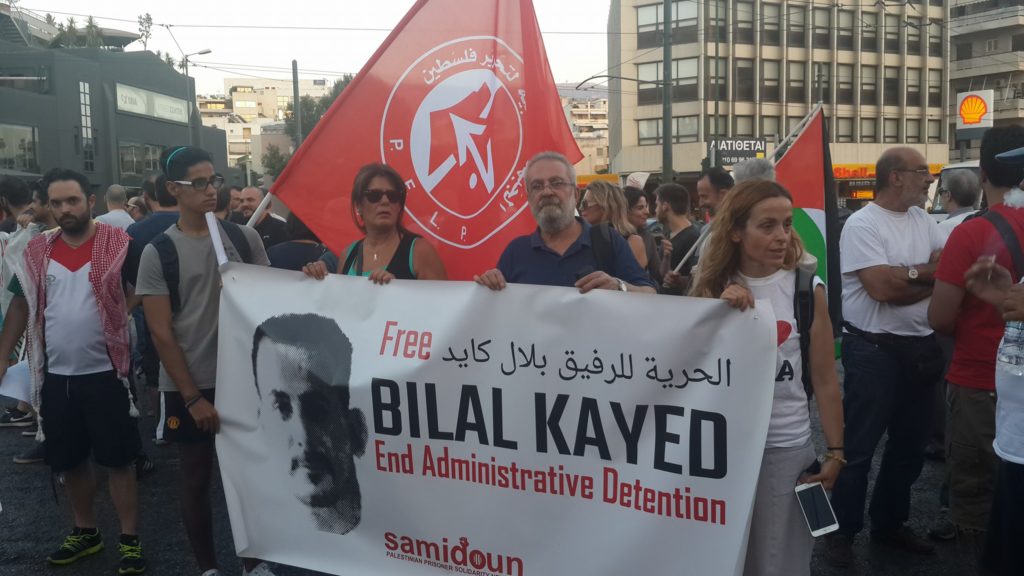 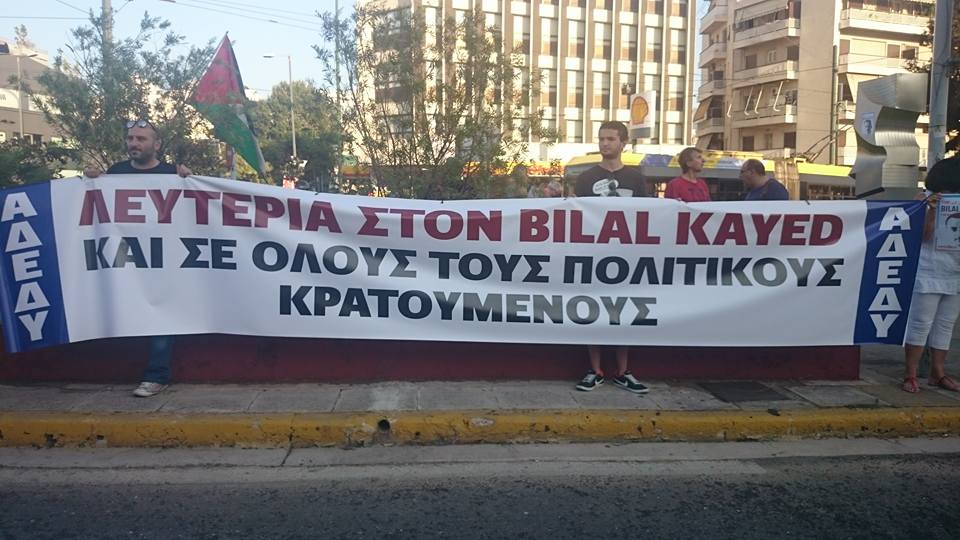 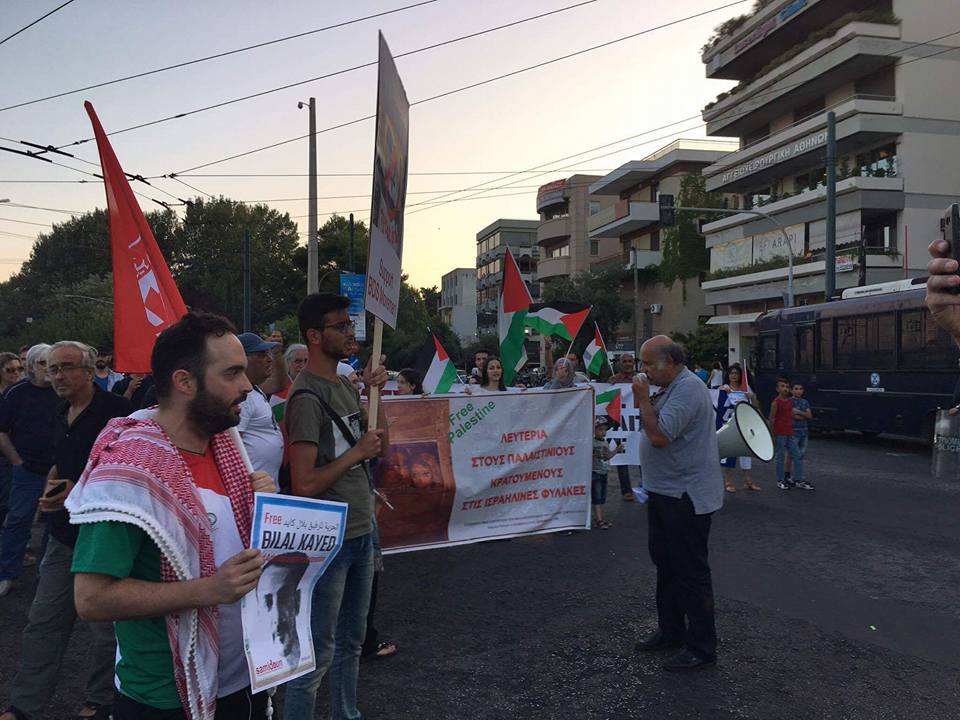 In Athens on 29 July, the ADEDY trade union called a demonstration for Kayed’s freedom outside the Israeli Embassy, joined by a number of Palestinian and solidarity organizations who came together in support of Palestinian political prisoners. 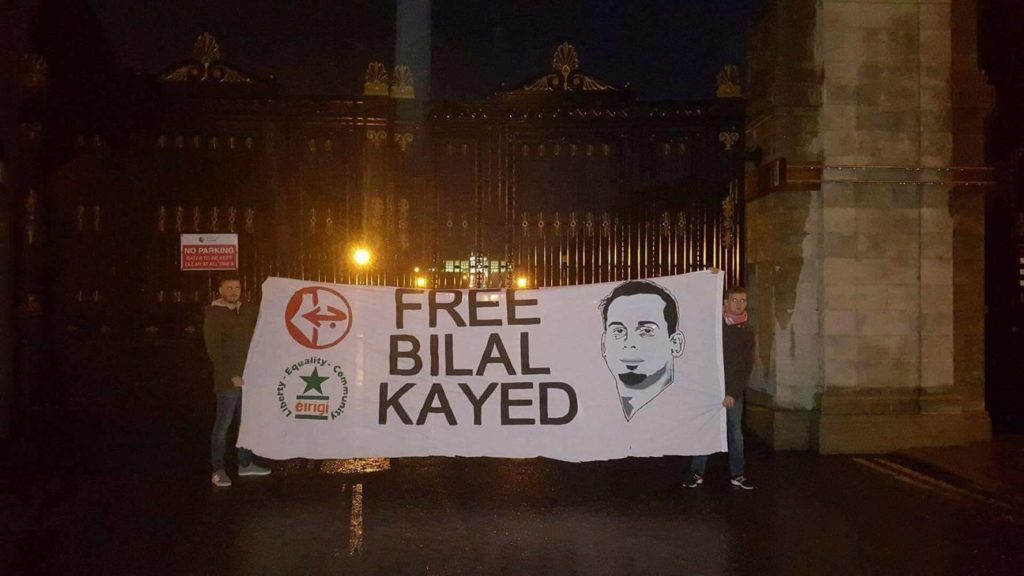 Irish republican socialist group eirigi demanded freedom for Bilal Kayed in Belfast, displaying a banner and distributing literature outside Stormont, demanding Kayed’s freedom from administrative detention and highlighting his lengthy hunger strike. They said, “éirígí once more extends its solidarity to all Palestinian political prisoners, and reiterates its support for the total liberation of Palestine from the auspices of Zionism and Imperialism.” 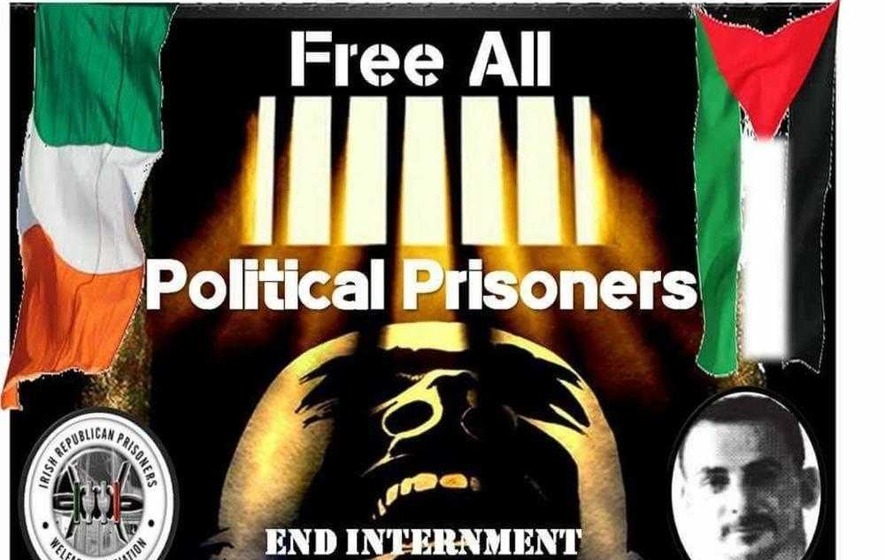 The Irish Republican Prisoners Welfare Association is planning a mural of solidarity between Irish Republican and Palestinian prisoners featuring a portrait of Bilal Kayed. The planned mural, on Belfast’s International Wall, has faced threats from anti-Palestinian individuals.

Rallies throughout Palestine for Kayed have continued; in Gaza, a motorcade of driving protest for Kayed’s freedom wound through the streets. Earlier, Waed Association held a protest on 27 July to call for freedom for Kayed and support the dozens of Palestinian prisoners on hunger strike in Israeli jails.  On Thursday, 28 July, shops in Bethlehem held a 2-hour strike, from 10 am to 12 pm to demand freedom for Kayed. Kayed’s mother joined a protest in Jerusalem in support of Kayed and his fellow prisoners. Marches and protests have continued in cities, villages, and refugee camps throughout Palestine, including Tubas, Ramallah, and Dheisheh camp; students in Nablus followed on the World Student Day of Solidarity with Bilal Kayed and Palestinian Prisoners with a march through the city, organized by the Progressive Student Labor Front.

On Friday, 29 July, marchers will proceed after Friday prayers in Balata refugee camp to Huwarra checkpoint demanding freedom for Bilal Kayed. In addition to the growing protests in Palestine and internationally for Kayed, there are growing electronic campaigns including a “Twitterstorm” planned to take place on Saturday, 30 July, during the 10 days of international solidarity action with Bilal Kayed.