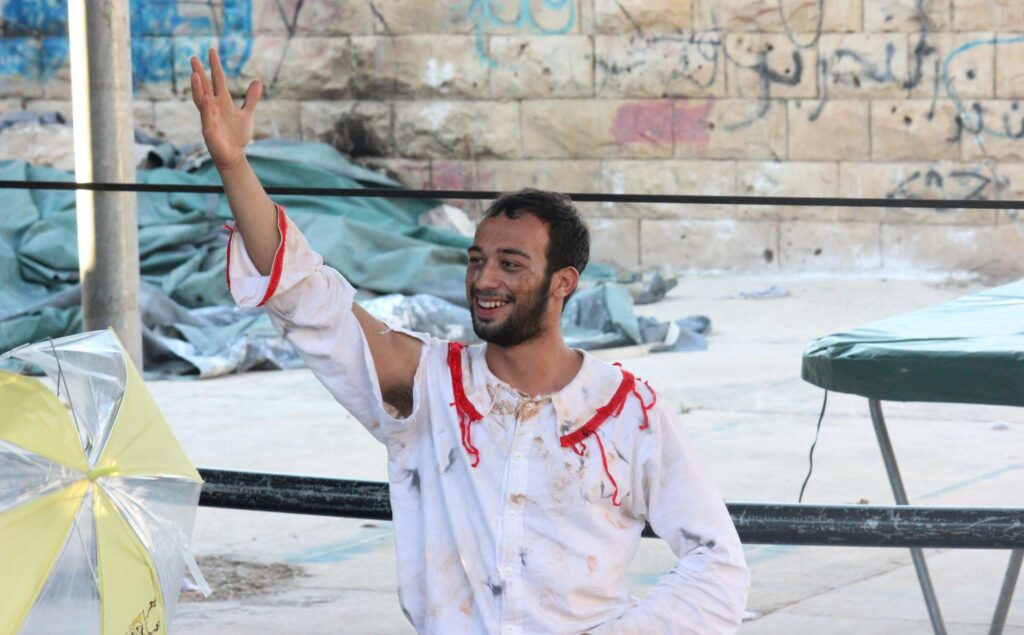 New prisoners joined dozens of fellow Palestinian detainees in Israeli jails on collective hunger strike in solidarity with Bilal Kayed on Tuesday, 26 July, including Mohammed Abu Sakha, the Palestinian circus performer and trainer held without charge or trial under administrative detention whose case has drawn international support and solidarity from the artistic and circus community.

In addition, the Prisoners’ Affairs Committee announced that 50 more Palestinian prisoners in Israeli jails would be joining the over 50 already on hunger strike, for a total of over 100 striking prisoners. Kayed, 34, has been on hunger strike since 15 June to demand his freedom from administrative detention without charge or trial. He was ordered to administrative detention upon the completion of his 14.5-year sentence in Israeli prison on 13 June 2016; his case is seen as threatening a precedent of indefinite imprisonment of Palestinian prisoners following the expiration of their sentences. He is currently shackled hand and foot to his hospital bed in Barzilai hospital, guarded at all times by three prison guards and under intense surveillance; he is unable to walk, has episodes of losing sight, experiences severe pain, and suffers dizziness and deep fatigue. He has consumed only water for the past 43 days.

The new hunger strikers announced their participation as the prison authority escalated raids, attacks, and transfers against prisoners protesting in solidarity with Kayed and fellow administrative detainees on hunger strike for freedom. Section 5 of the Ramon prison was raided and attacked by Israeli prison guards and repressive units, who then rounded up 100 prisoners affiliated with the leftist Popular Front for the Liberation of Palestine – Kayed’s party – and Fateh, and transferred them to Ahli Kedar prison.

This came after a large group of repressive forces invaded section 15 of the Ofer prison on Monday, 25 July where the violently beat Palestinian prisoners. Malik al-Zaaqiq was beaten and injured and then taken into solitary confinement; section 15 is known as the “national unity” section because it includes Palestinian prisoners of all affiliations. The attack came after the announcement that 50 Palestinian prisoners had announced a ten-day hunger strike beginning on Tuesday in solidarity with Bilal Kayed, Mohammed and Mahmoud Balboul, Malik al-Qadi, Ayad Herama, and Mohannad Mutahna, all administrative detainess on hunger strike to demand their freedom.  Also on hunger strike for ten days is Walid Salamah, protesting against his solitary confinement, as well as Mahmoud Sarahna, Ziad al-Bazzar, Amin Kamil, and Ahmed Barghouthi, in protest of the International Committee of the Red Cross’s cut in family visits from twice to once month.y.

Al-Qadi, 20, is a student of journalism and media at Al-Quds University at Abu Dis. His mother urged support for her son in hunger strike from the university, noting that he has been held without charge or trial since 23 May. He had previously been held for four months under administrative detention without charge or trial, released, and then re-imprisoned 45 days later. He previously went on hunger strike to protest his abuse and torture under interrogation.

The hunger-striking prisoners held without charge or trial, brothers Mohammed and Mahmoud al-Balboul, were assaulted by jailers in the Ofer prison after returning from an appeal against their administrative detention on Monday, 25 July; the Prisoners Affairs Committee reported that five guards beat the brothers, who show bruising and other clear signs of beating. The two brothers have been on hunger strike for 21 days demanding their freedom from administrative detention without charge or trial; their 15-year-old sister Nuran was released last week after three months in prison.