Home Campaigns Administrative Detention In photos: Students take to the streets from Gaza to New York...

The World Student Day of Solidarity with Bilal Kayed and Palestinian Prisoners included events and actions from Gaza City to New York to Philadelphia. Drawing support from student movements in the US, Morocco, Tunisia, Iraq, Jordan, Egypt and elsewhere, the Progressive Student Labor Front’s call for action on Monday, 25 July sparked protests, sit-ins, and events calling for freedom for hunger-striking Bilal Kayed and his fellow Palestinian prisoners. 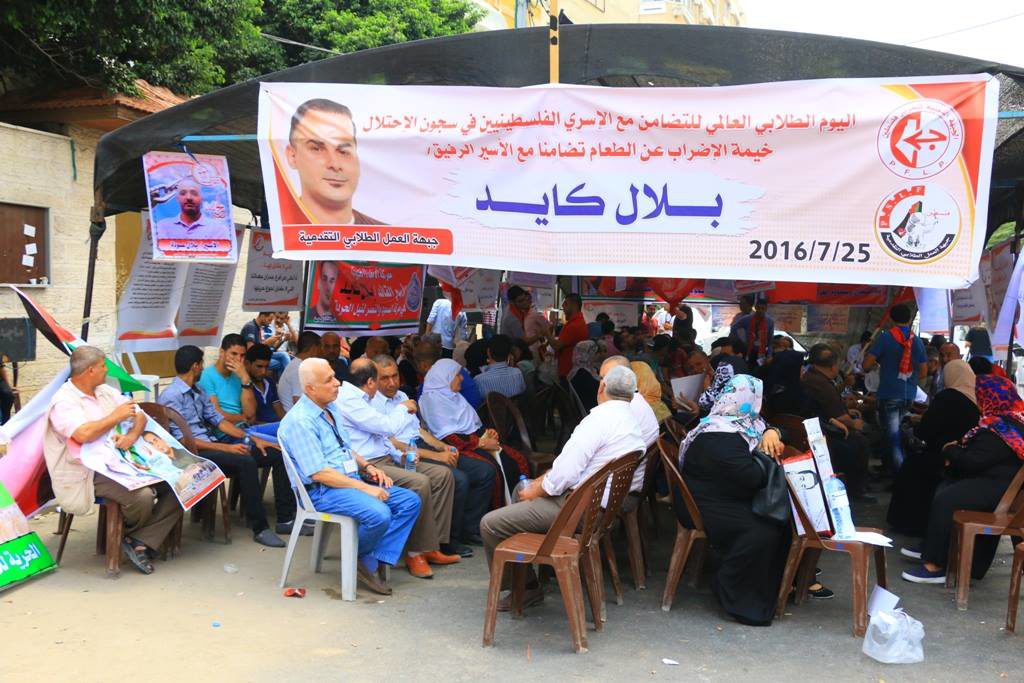 There are currently approximately 100 Palestinian prisoners on hunger strike in support of Kayed and his fellow striking prisoners held without charge or trial under administrative detention. Kayed, 34, has been on hunger strike since 15 June to demand his freedom from administrative detention without charge or trial. He was ordered to administrative detention upon the completion of his 14.5-year sentence in Israeli prison on 13 June 2016; his case is seen as threatening a precedent of indefinite imprisonment of Palestinian prisoners following the expiration of their sentences. He is currently shackled hand and foot to his hospital bed in Barzilai hospital, guarded at all times by three prison guards and under intense surveillance; he is unable to walk, has episodes of losing sight, experiences severe pain, and suffers dizziness and deep fatigue. 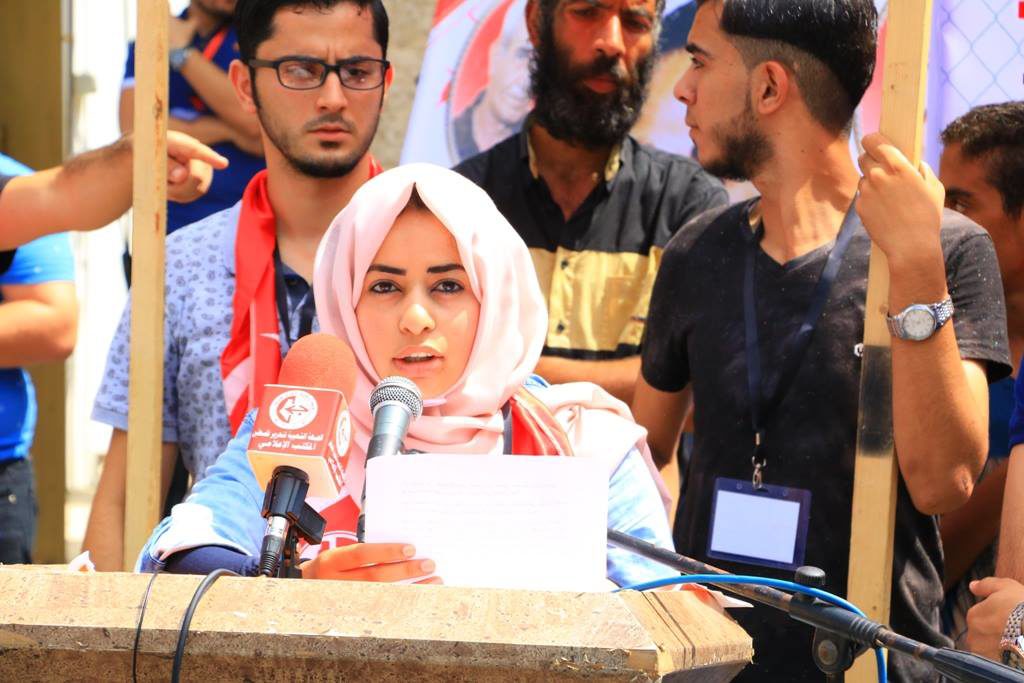 The PSLF organized a solidarity tent in Gaza City on Monday, 25 July, bringing students, youth, and representatives of political parties and social movements to the solidarity tent demanding freedom for Kayed and his fellow prisoners, including hunger strikers Mohammed and Mahmoud al-Balboul, Malik al-Qadi, Ayad Herama, and Mohannad Mutahna, all demanding freedom from their imprisonment without charge or trial. Student members of the PSLF spoke at the event, calling for freedom for all Palestinian prisoners. 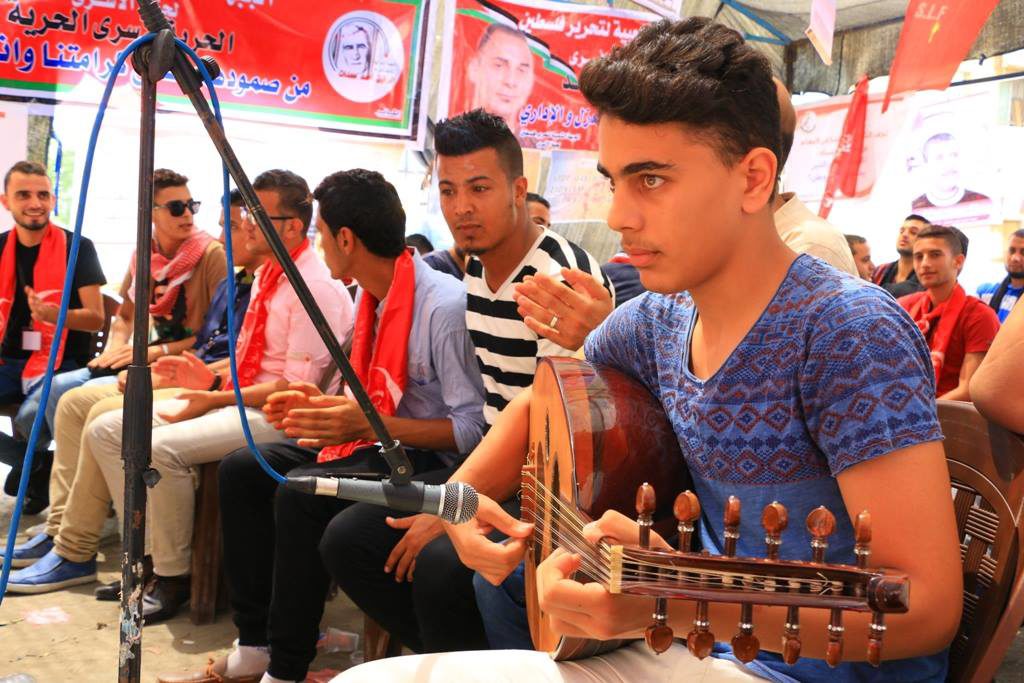 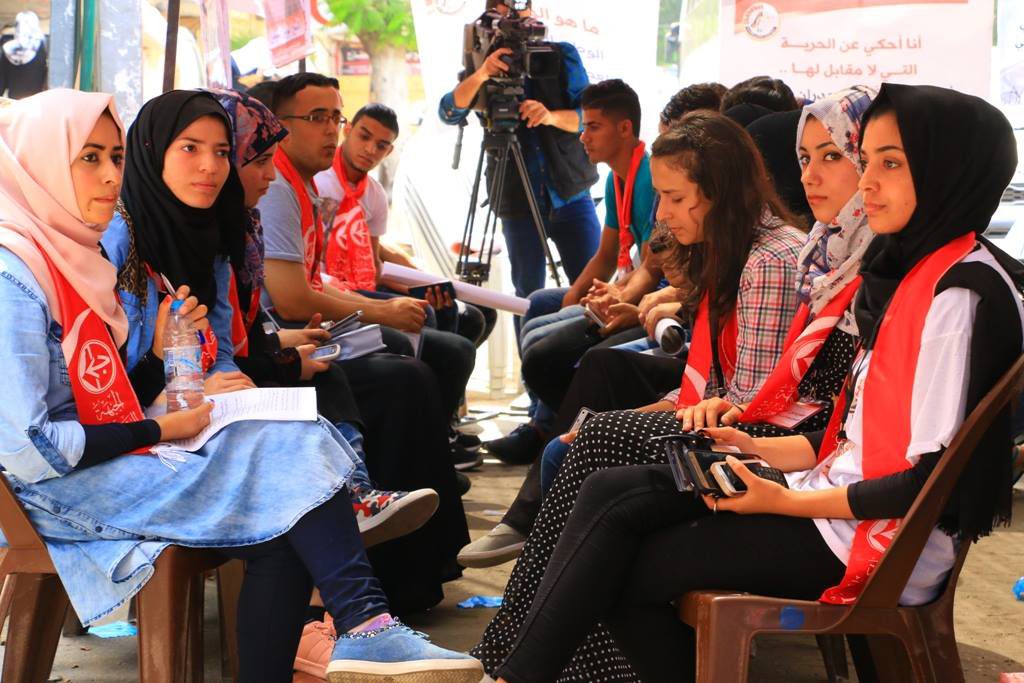 They highlighted the cases of student prisoners, including Donya Musleh, a PSLF activist in the West Bank, recently sentenced to 10 months imprisonment for “incitement” for posting on Facebook. Prominent Palestinian political figures spoke at the event, including Maryam Abu Daqqa of the Popular Front for the Liberation of Palestine, Ismail Radwan of Hamas, and Talal Abu Zarifa of the Democratic Front for the Liberation of Palestine, highlighting the centrality of the prisoners’ struggle. 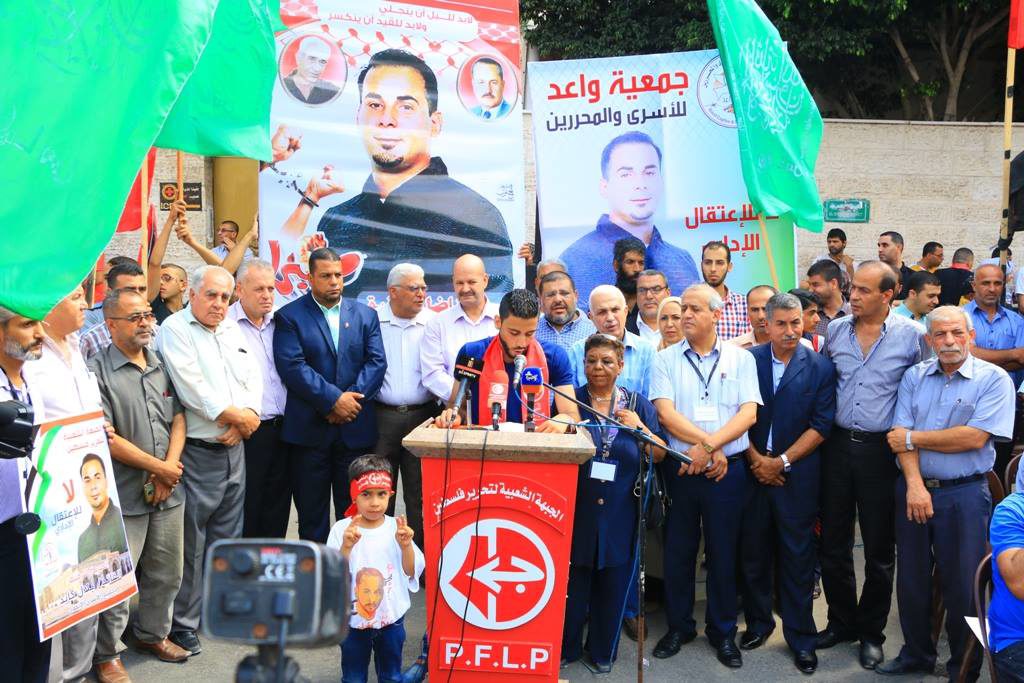 Palestinian students in Egypt and the students of the Karama Party organized an event at the party’s office in Cairo in support of Kayed’s strike, featuring former prisoner Ahmed Abu Saud, speaking about the experience of imprisonment in Israeli jails and the centrality of the prisoners’ struggle to the Palestinian movement for national liberation. 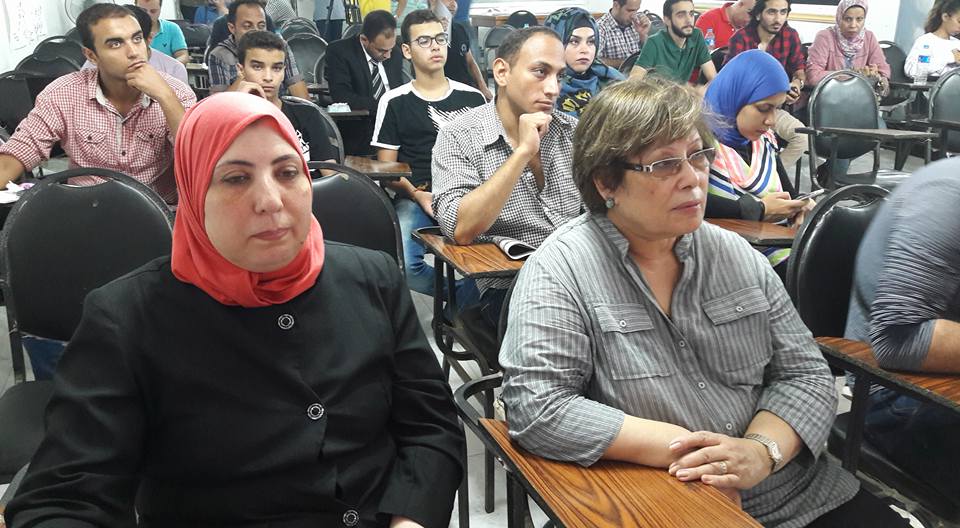 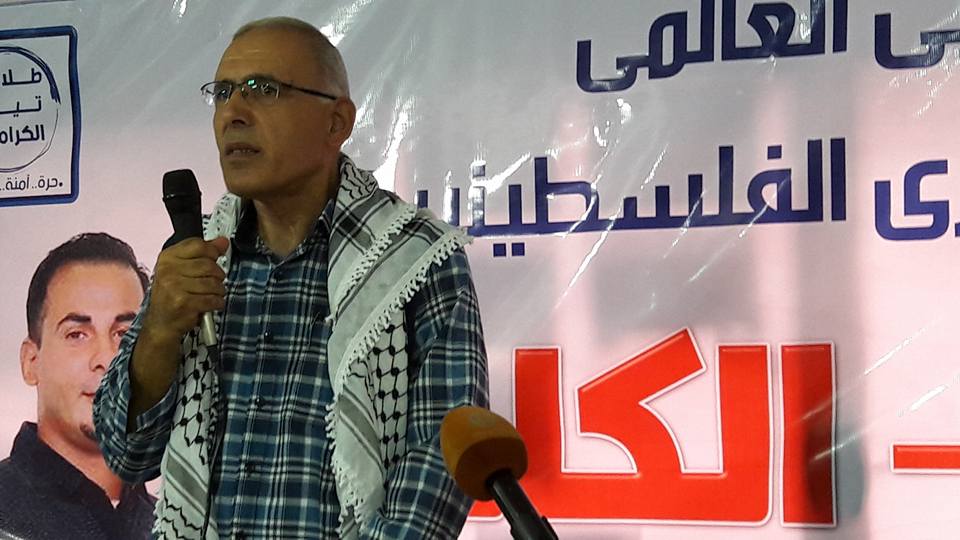 Students in Bir Zeit and an-Najah universities organized for freedom for the prisoners, with a large protest at Bir Zeit involving the various student blocs, as well as a program including former hunger strikers Khader Adnan and Mohammed al-Qeeq. 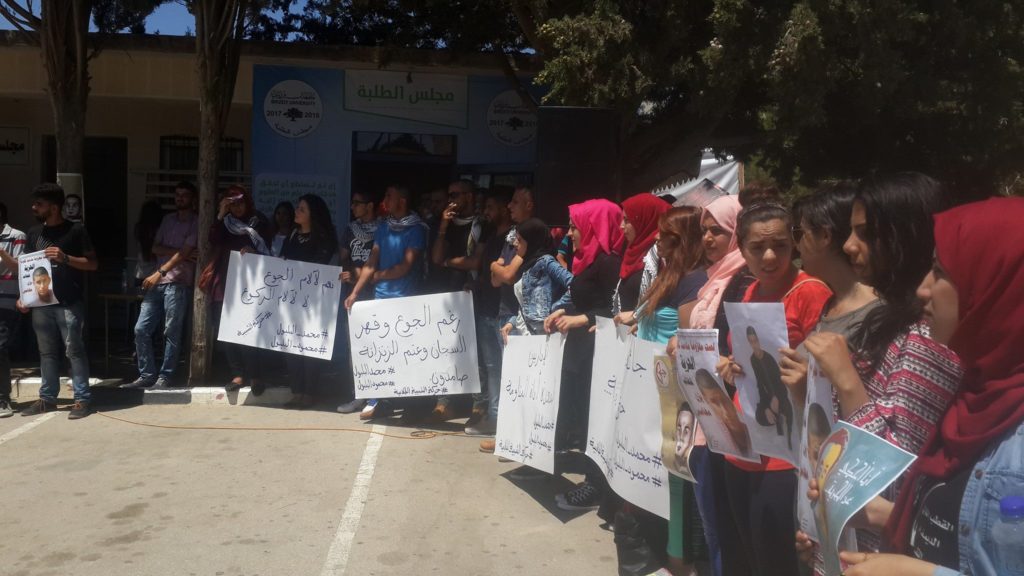 In addition, the General Union of Tunisian Students expressed its support for the campaign and intention to organize events, while the Union of Democratic Youth of Morocco will organize a protest in Rabat on Friday, 30 July. These events come amid international days of solidarity with Kayed’s strike for freedom, taking place from 20-30 July, with events being organized in Athens, Brussels, Berlin, Dublin, Belfast, London, Manchester, Amman, Lebanon, New York City, Philadelphia, Milan, and a number of other cities. 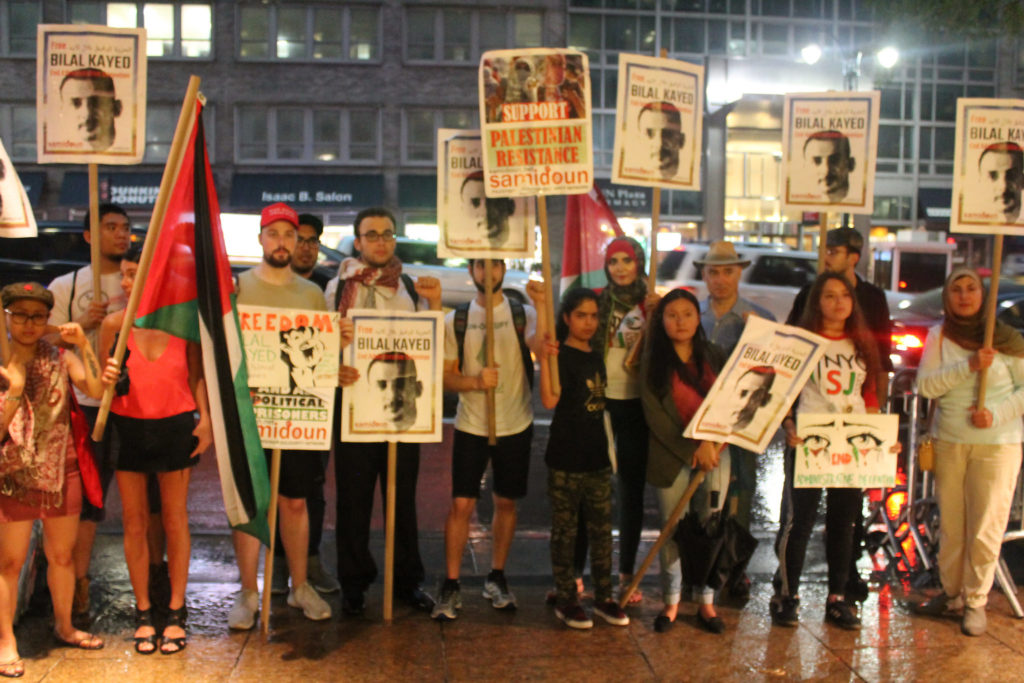 In New York City, NYC Students for Justice in Palestine organized a rally outside the Israeli embassy demanding freedom for Kayed and fellow Palestinian prisoners. Despite drenching rain, students and supporters gathered to demand Kayed’s release and participate in the world student day of action. 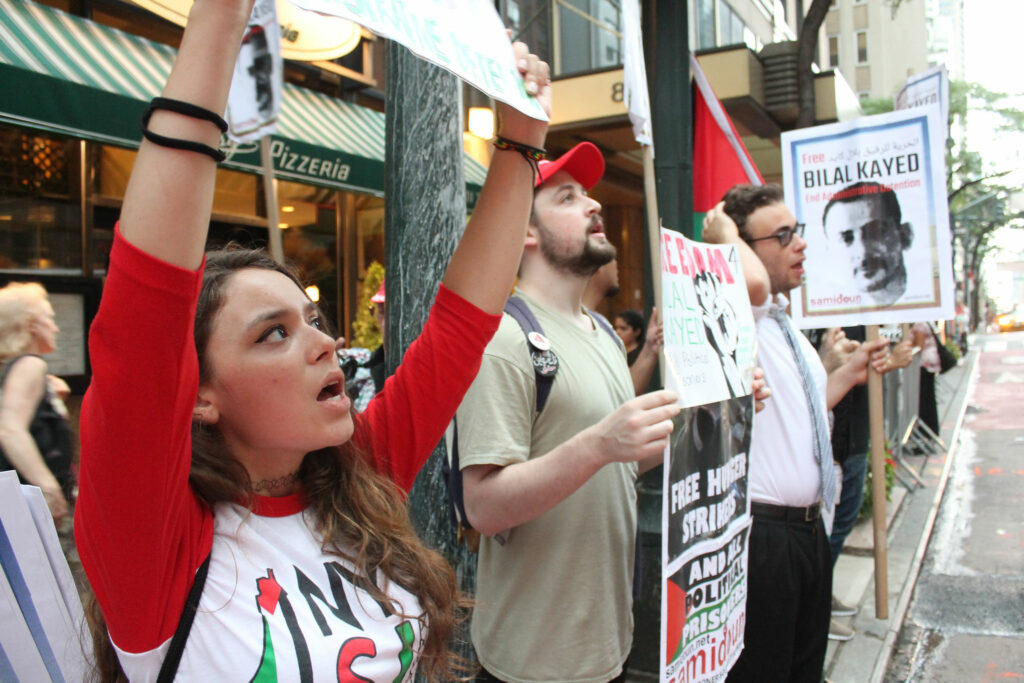 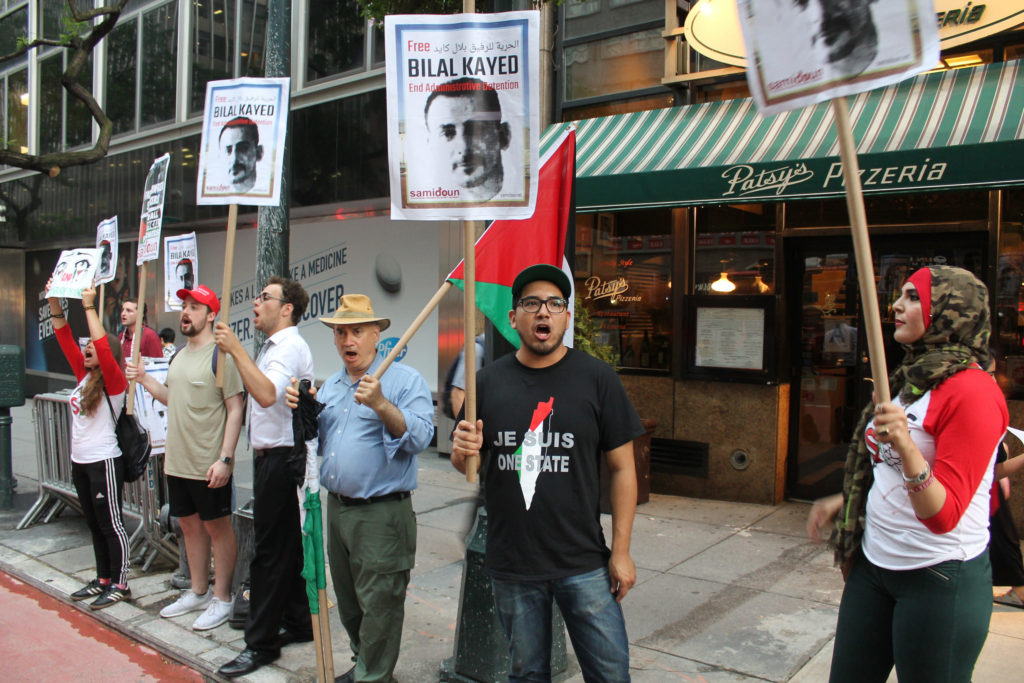 The protest had earlier been threatened by the infamously racist and violent “Jewish Defense League,” identified as responsible for the 1985 assassination of Palestinian American community leader Alex Odeh in Santa Ana, California. However, despite posting racist chants to social media, the JDL counter-protest fizzled with only a few individuals standing in the pouring rain – and departing before the student protest ended. 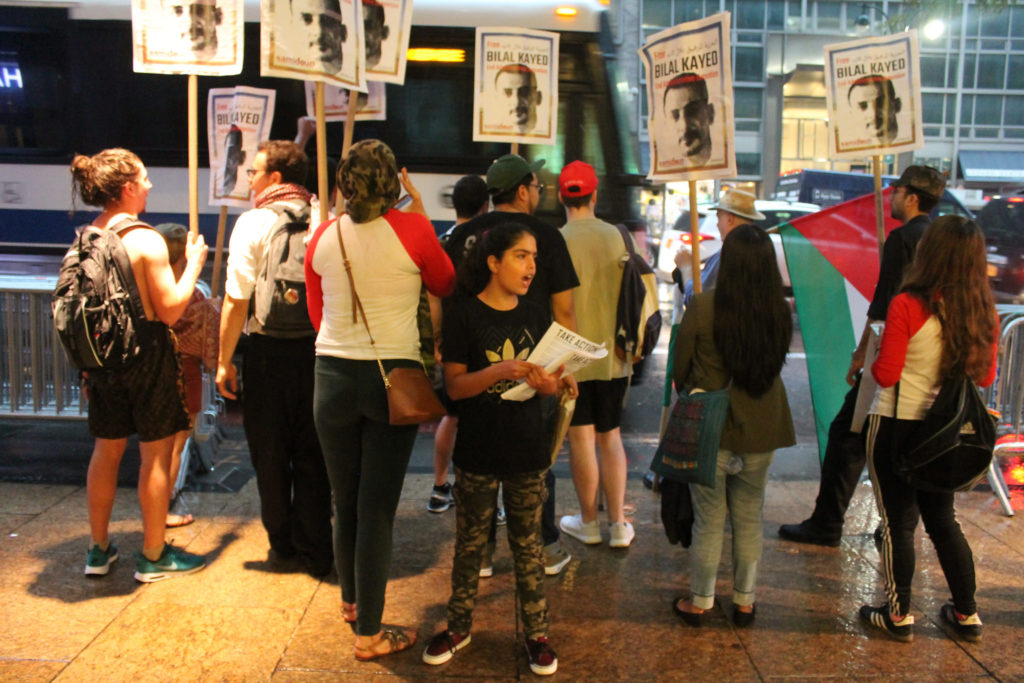 The World Student Day of Action also included a rally at the Democratic National Convention in Philadelphia, including a contingent, SJP ONA MOVE, that linked the struggles of Palestinian political prisoners and Black Liberation and other political prisoners in US jails.

NYC Students for Justice in Palestine also collected photographs of student supporters of Bilal Kayed in an online campaign for Kayed’s freedom: 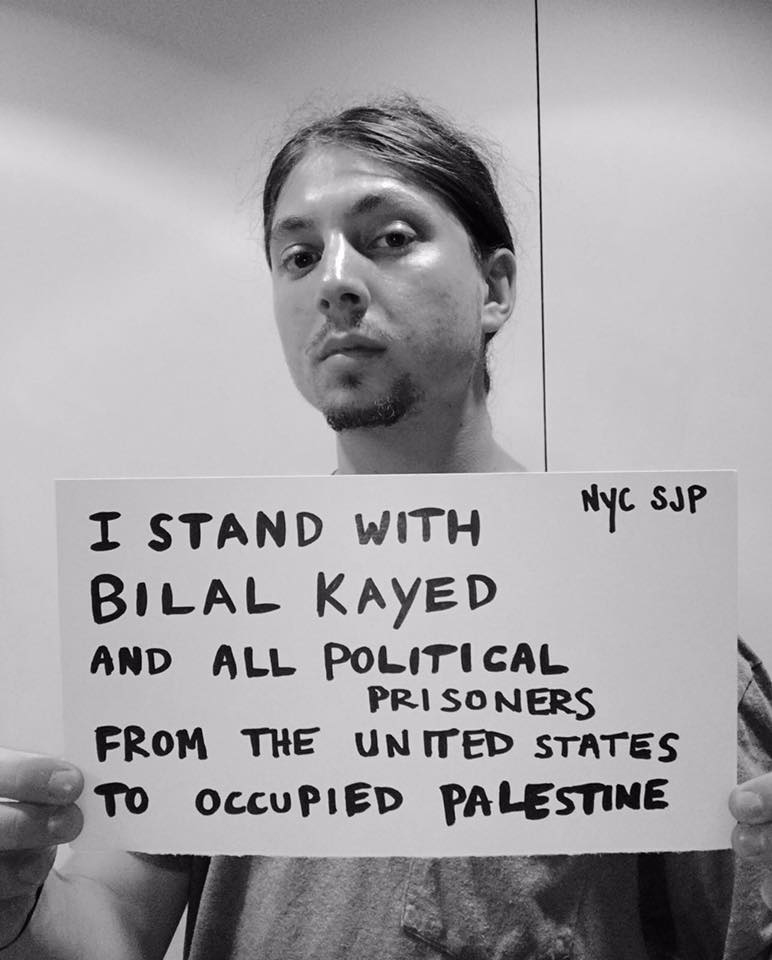 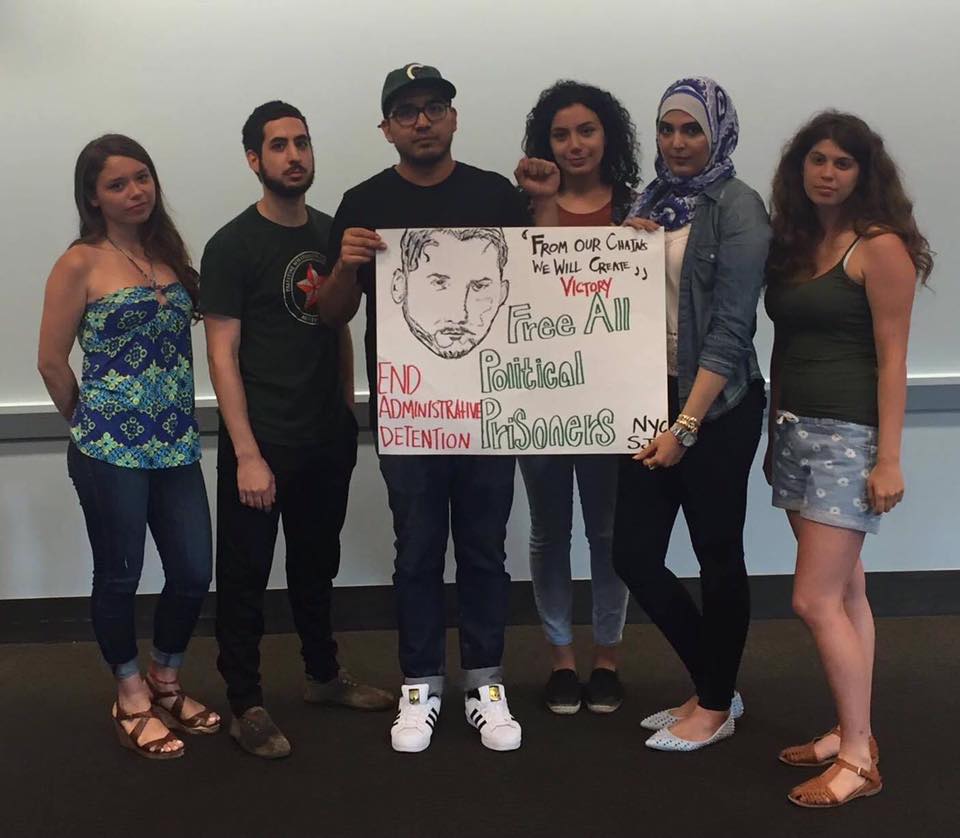 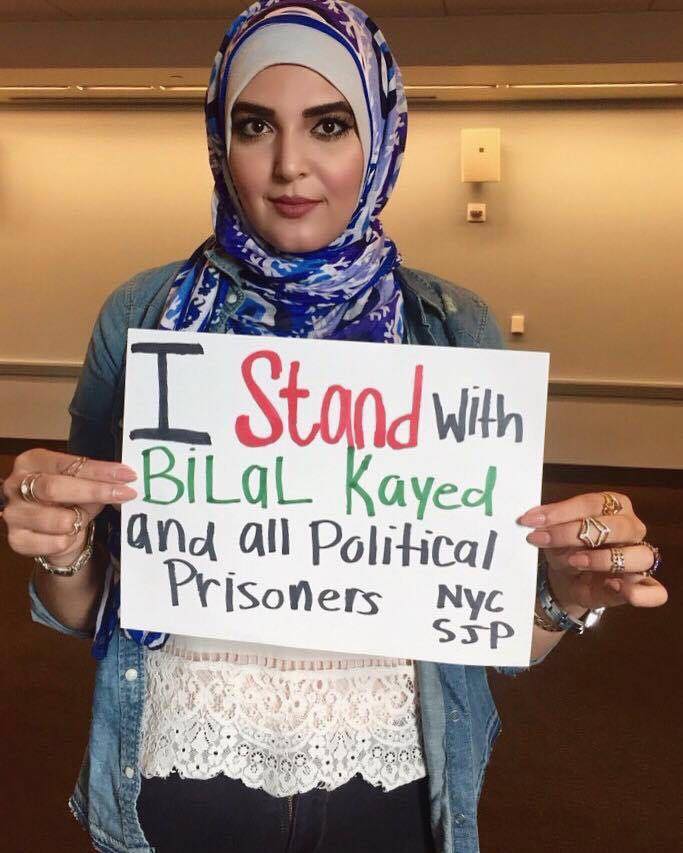 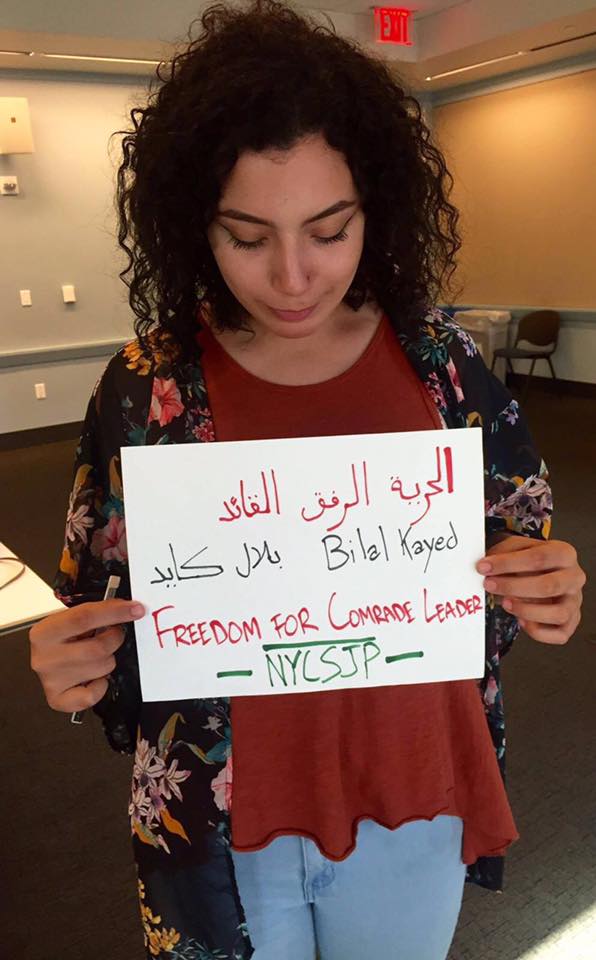 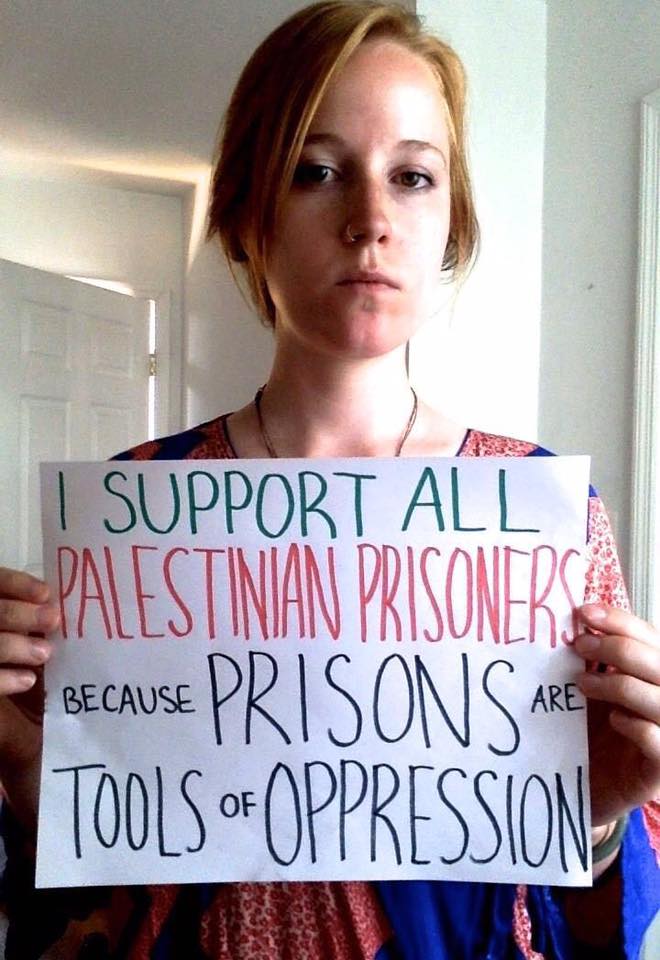 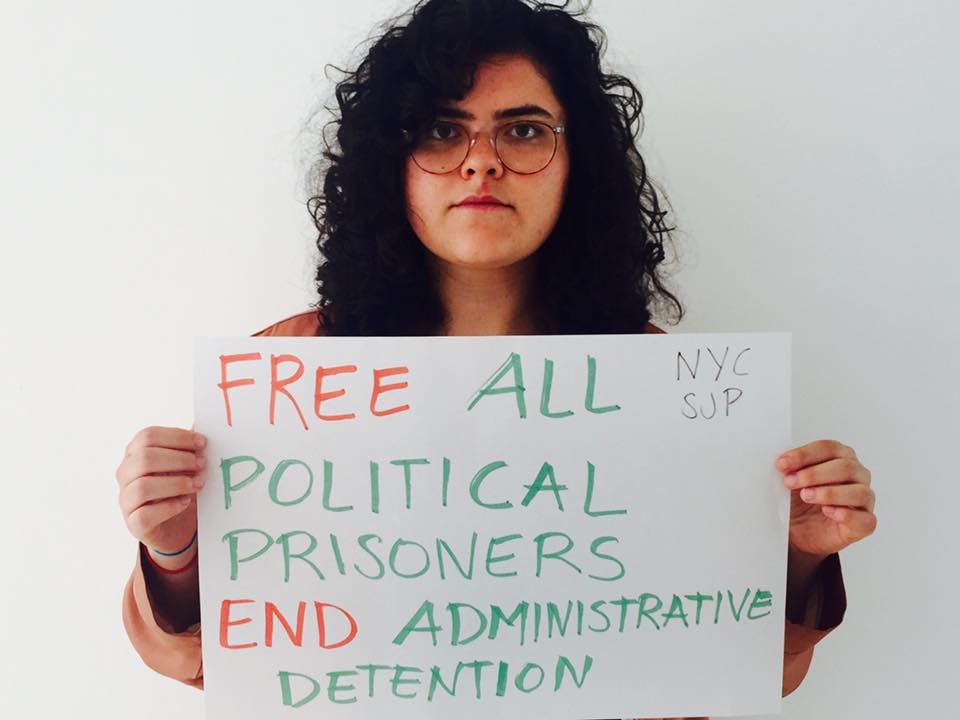 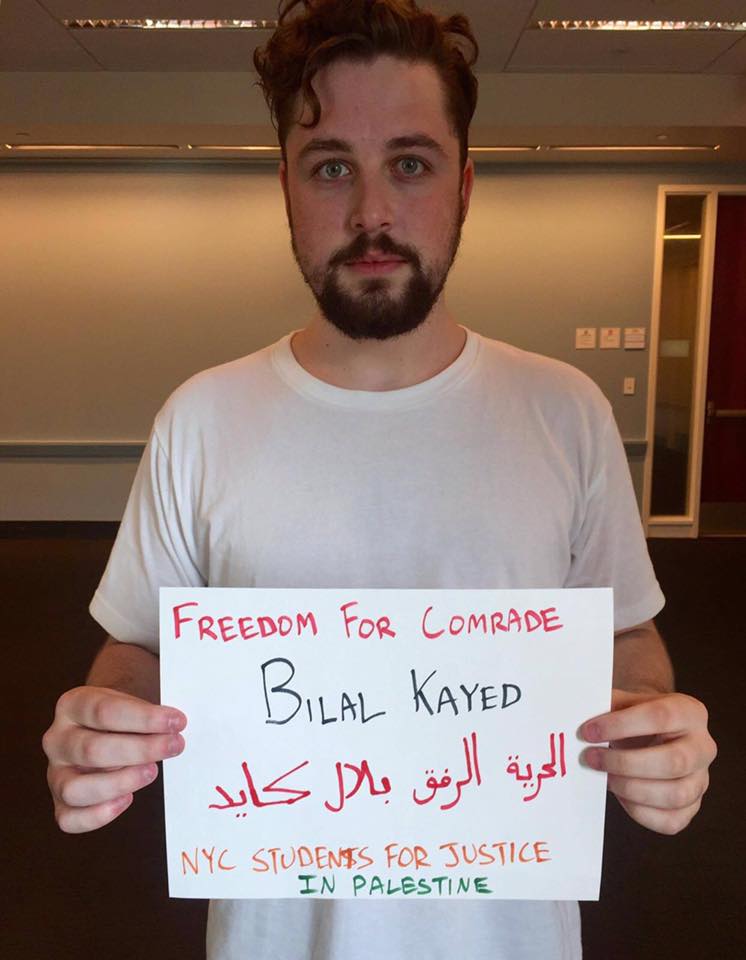 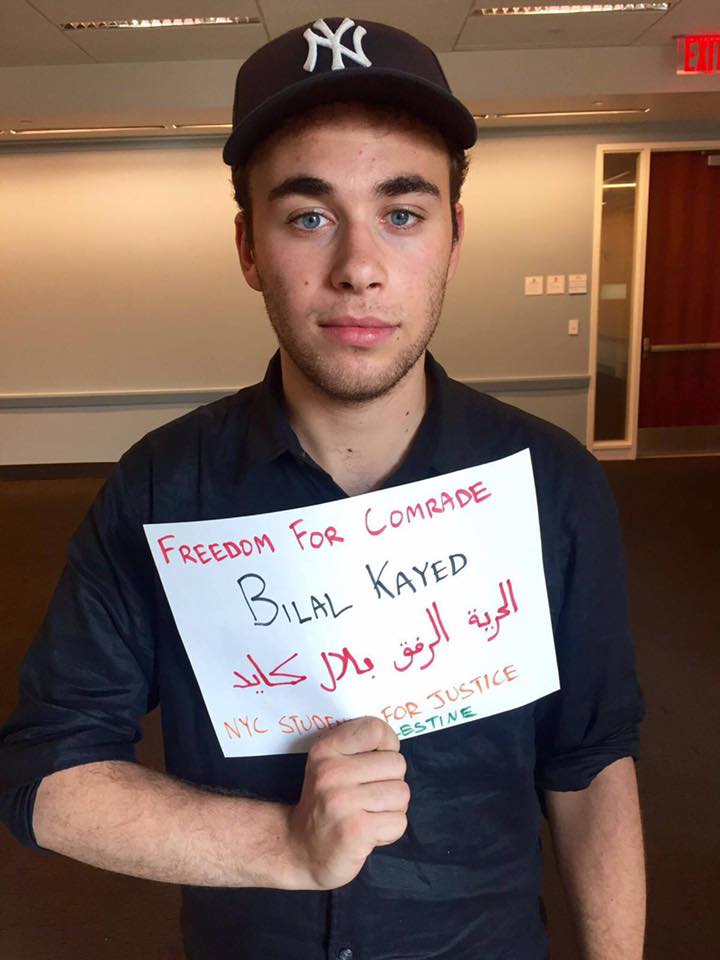 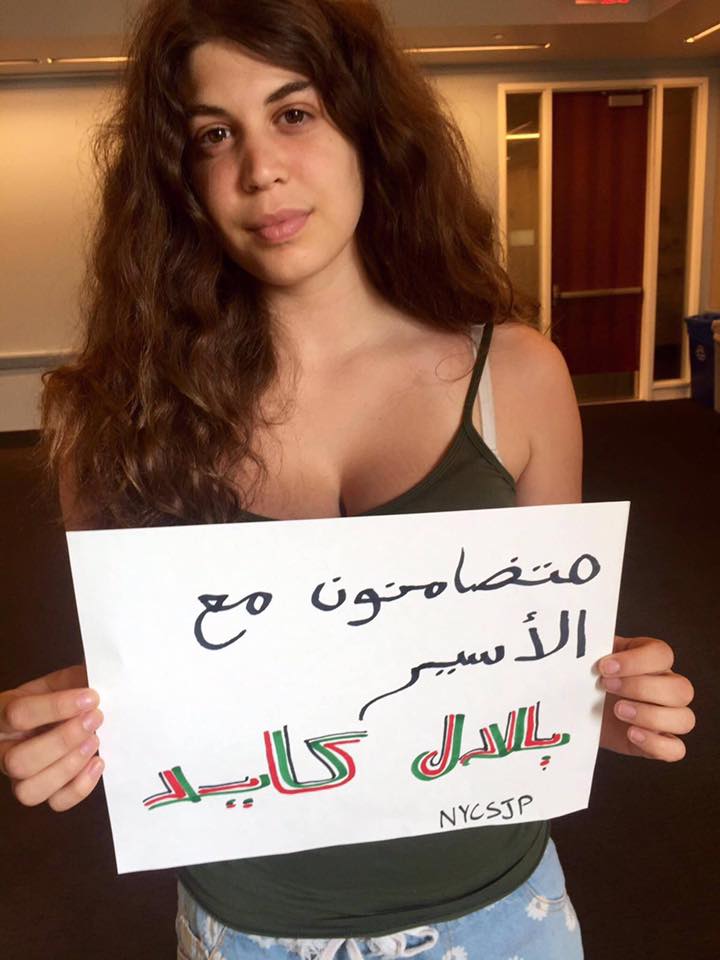 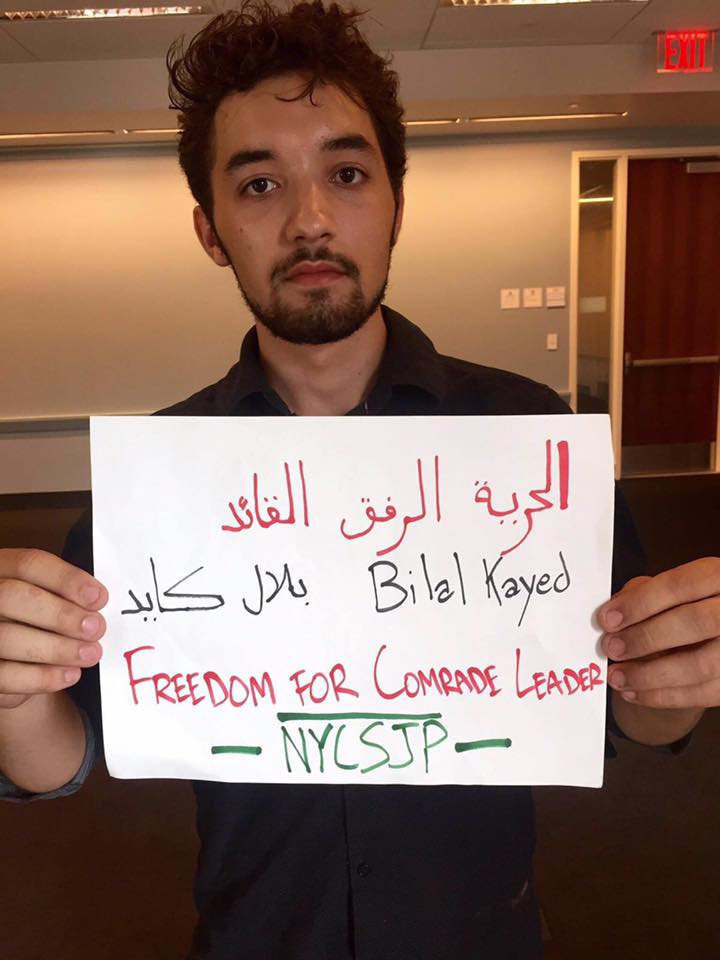 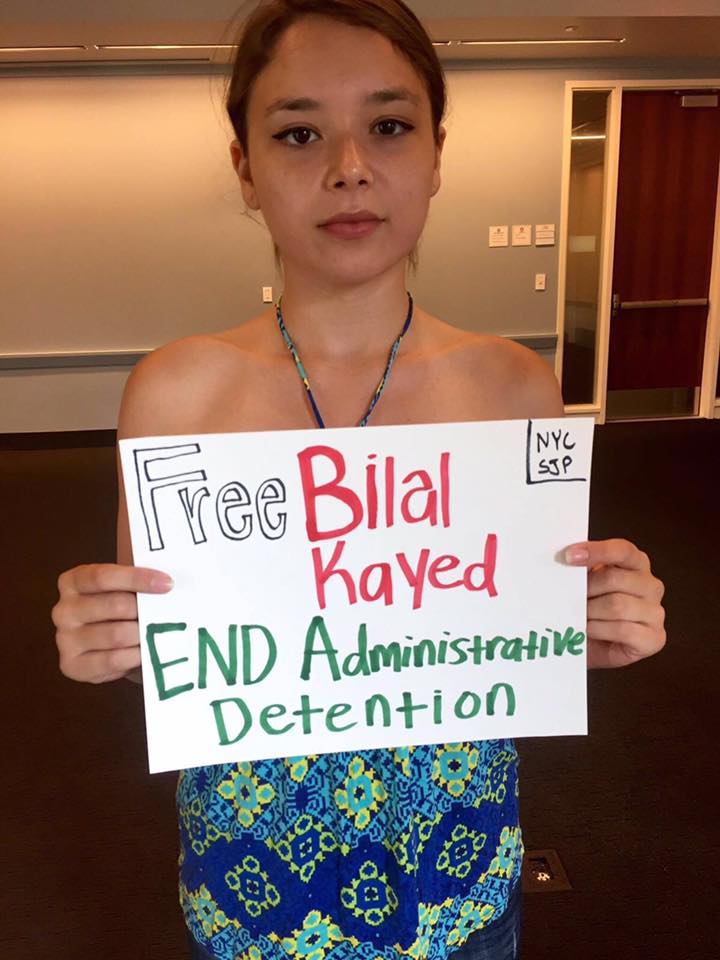 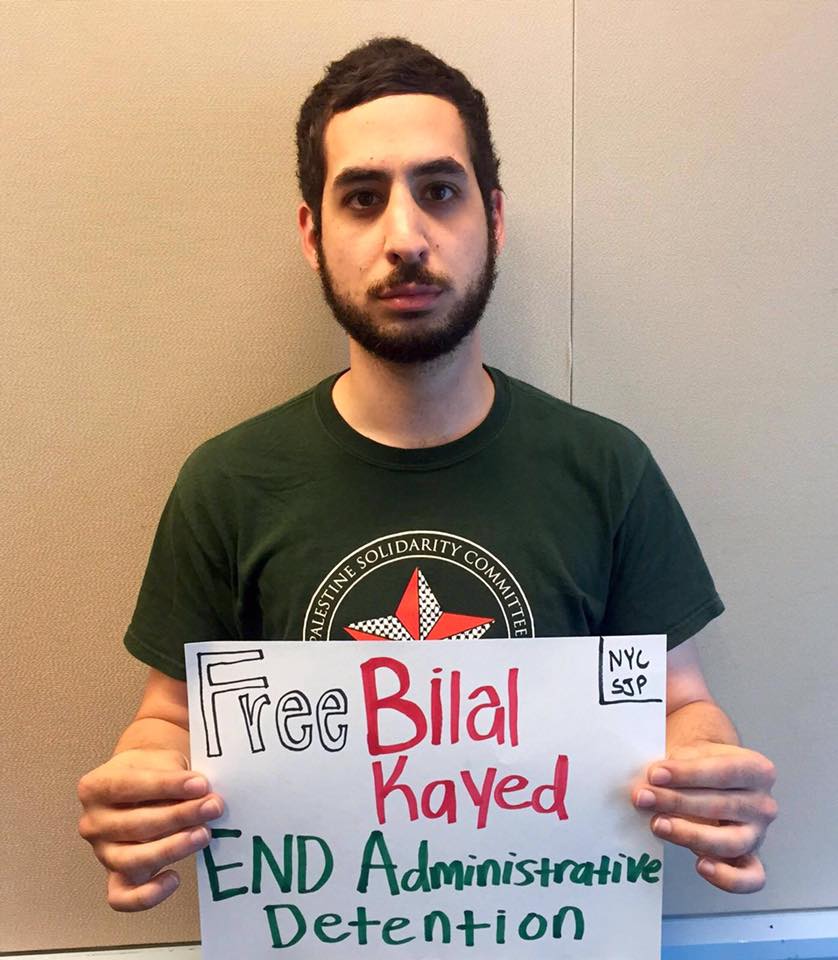 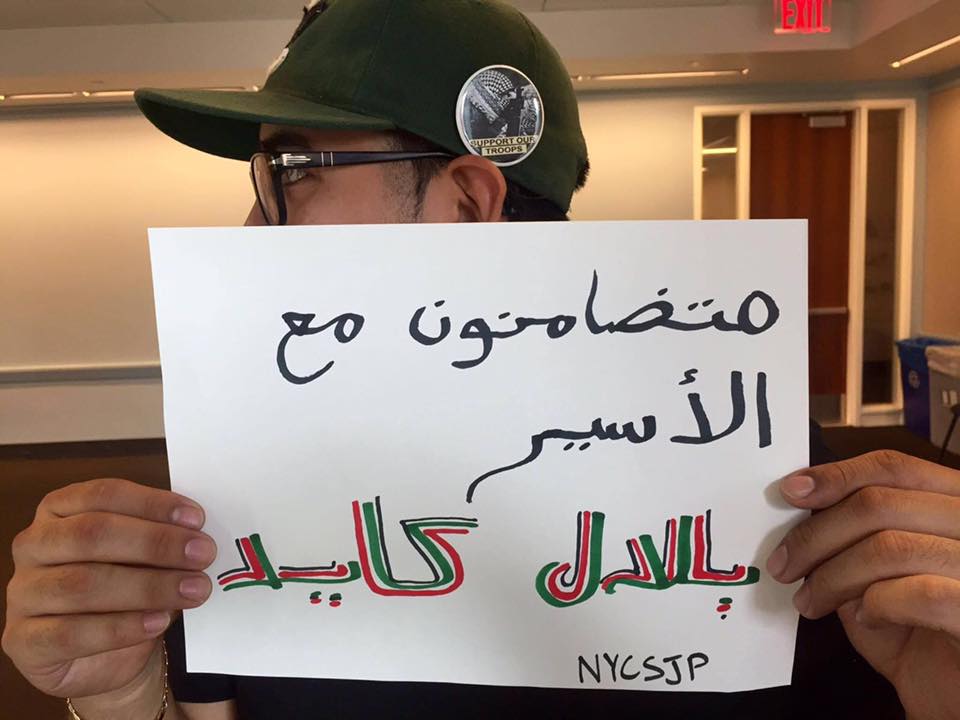