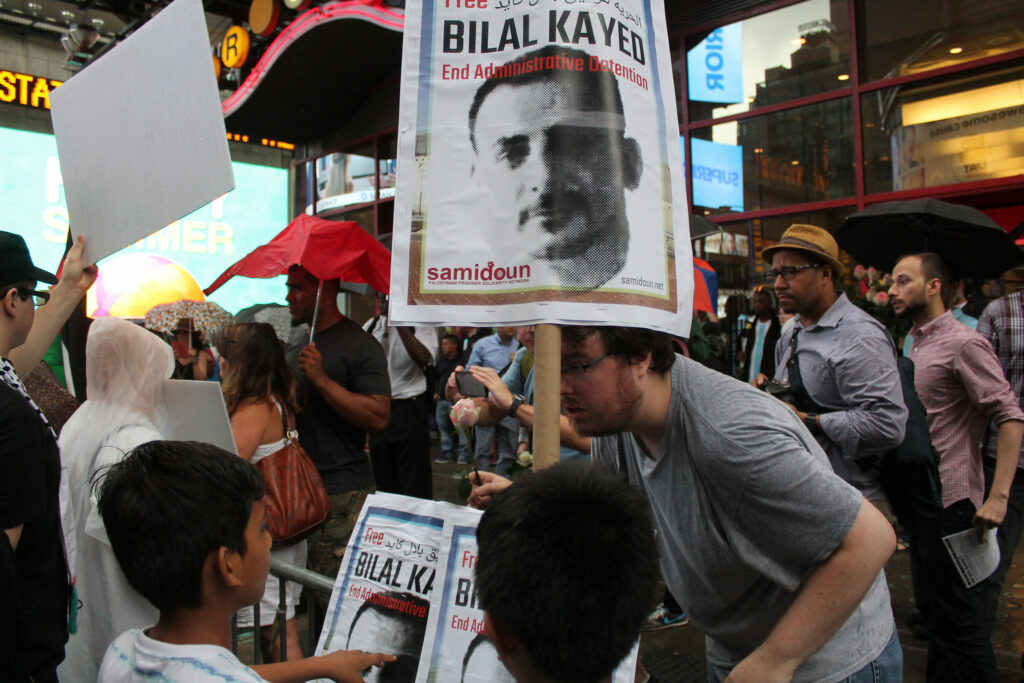 As hunger-striking Palestinian prisoner Bilal Kayed was hospitalized after a serious deterioration in his health on his 33rd day consuming only water, and as dozens of Palestinian political prisoners began a growing collective hunger strike on Sunday, 17 July, we urge international solidarity and action to support their struggle with events, protests and actions from 20-30 July. Our struggle must rise to meet their level of sacrifice!

The Progressive Student Labor Front in Palestine has called for an international day of student action on 25 July. We join in this call to action and urge students to participate – and non-students and allied groups to organize events and actions on and around this date demanding freedom for Bilal Kayed and his fellow Palestinian prisoners.

Bilal Kayed is now in his second month of hunger strike; on strike since 15 June, he is demanding his freedom from administrative detention, imprisonment without charge or trial. Kayed was ordered to six months’ administrative detention upon the expiration of his 14.5 year sentence in Israeli jails on 13 June 2016. A leader inside the prisons, he was one of the organizers of the 2012 collective Karameh hunger strike, in which thousands of Palestinian prisoners refused food for nearly one month against solitary confinement and denial of family visits.

Kayed’s case is a threatening precedent to all Palestinian prisoners: of indefinite detention following the expiration of lengthy sentences in Israeli prisons. The Palestinian Prisoners’ Movement has come together collectively – alongside hundreds of Kayed’s comrades in the PFLP – to join in hunger strikes and protest actions inside the prisons demanding Kayed’s freedom.

Organizers and people of conscience have participated in a growing number of events, actions and protests in major cities around the world, demanding freedom for Kayed and his fellow Palestinian prisoners. Kayed is one of 750 Palestinians held in administrative detention and over 7,000 total Palestinian political prisoners in Israeli jails.

In particular, we urge actions and protests to build the BDS campaign for boycott, divestment and sanctions against Israel for its violations of Palestinian rights, including the ongoing imprisonment of Bilal Kayed and other Palestinian prisoners: Free Bilal, Boycott Israel!

Now, as Bilal is hospitalized and dozens of prisoners have joined him in open hunger strike – with hundreds more in ongoing protest actions – it is time for an international escalation of struggle, to take to the streets and raise our voices in support of this critical battle for freedom. We urge all international supporters of justice and liberation for the Palestinian people to meet the prisoners’ sacrifice with organizing and struggle for freedom for Bilal Kayed and his fellow Palestinian prisoners.

Please use the form, email samidoun@samidoun.net or post to Samidoun on Facebook about events on 20-30 July, including existing events, protests, literature distributions or tables incorporating materials about Bilal Kayed and administrative detention.

24 July, Philadelphia: During the DNC: Demand freedom for political prisoners!

1.  Organize or support a student action or event for 25 July in response to the Progressive Student Labor Front’s call for a World Student Day of Solidarity with Bilal Kayed and Palestinian prisoners – including both on and off-campus events, literature distribution, tabling, or any other activity to center the work and organizing of youth and students.

2. Hold a protest, literature distribution, picket or demonstration, or bring this issue to broader social justice protests, including building the boycott, divestment and sanctions campaign to internationally isolate Israel, its institutions, and the corporations – like G4S -that profit from imprisonment, occupation, racism, colonialism and injustice. Demand freedom for Bilal Kayed and all Palestinian prisoners.

3. Participate in or Organize a Call-In Day – People across the US called the White House to demand freedom for Bilal Kayed. On 20-30 July, call your government officials and demand action on Palestinian prisoners and Palestinian rights – and the immediate release of Bilal Kayed.